The local community college, Bunker Hill Community College (BCC), put on the Music Unites Event. The event occurred on Tuesday November 13, 2018 at 5pm. The event was hosted by the International Education Week (club), in A300 Lobby of BCC. The event was hosted in hopes to united students, and show talents open to all students.

The first I am going to deliberate is Jack Ibert’s (1890-1962), the Chanson de Don Quichotte from the lieder concerto, No 1. Chanson du Depart.

Ibert was an extraordinary French composer. Ibert did not fit in any one of the leading genres (eras) of music. Nevertheless, he is celebrated for his wide-ranging compositions. Ibert often used components of multiple musical eras in one paper.

The composition was written for voice and piano it displays characteristics of Ibert’s known diversity in music genres. Upon listening to this song I noticed notes romanticism. The rhythmic patterns were indicative of Romantic music due to the vast voice pitch and piano accompanied the performer.

There were noticeable genre differences within song itself. Despite the stylistic and genre differences, the general features of the composition can be described as a Classical performance because the movement was accompanied by piano.

Robert Shumann (1810-1856), was a great composer of the Romantic era. A well-known piece of work of Shumann’s is Liederkries movement from the piano concerto, No.2 Intermezzo. Intermezzo the second piece of a twelve song cycle called Eichendorff Liederkreis. The composition refers to the Romantic era, because all Shumann’s songs were specifically for lieder, or voice piano performance.

While listening to the piece, the vagueness in meter and rhythm, and the distinctive emphasis made on the tonal framework of the piece were tremendously identifiable. Specifically, the lack of harmony among musical notes in voice and piano was clearly recognizable, however the piano seemed to grasp on to every amplified tone of the voice. All the same, the music sounded much softer in comparison with unyielding voice with a vast pitch range.

Listening to the piece invoked an overwhelming feeling of emotion of creativity and longing for adventure. I noticed the lyrical melody, it was chromatic at times, and I could hear the usage of dissonances.

Engagement and excitement of the audience was created by the arrangement of both classical and romantic styles. Overall the concert was easily enjoyable, significantly stimulating, and poignant.

The song-like melodies, chromatic harmonies, and dissonances, accurately reflects the sense of freedom of form and design that is the Romantic era. The offered music’s lyrics exposed the themes of pain, love, desire, and sorrow. The music was transporting the listeners to the romantic times.

I was especially impressed by the ability of the performers to grasp each solitary meaning each word and cadence. The two artists Shumann and Ibert seemed to be very similar in their thematic image. I also acknowledge that the differences in styles and genres did not distract me from the tangible concepts of the songs. 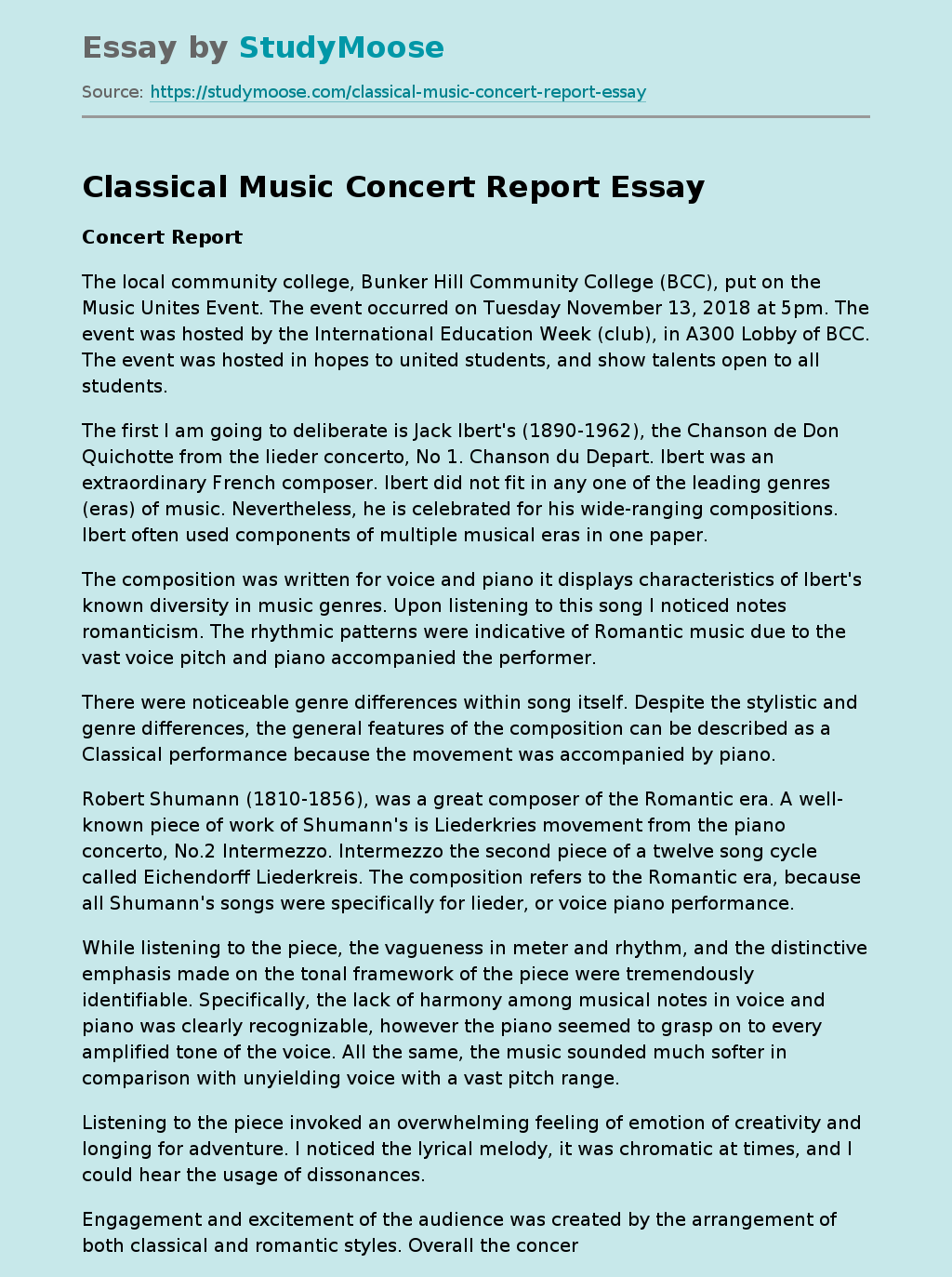