I am a casual listener because I like having music playing, filling the environment with sounds. I can listen to music while studying and sleeping, and I like listening to music because it can make me relax and ignore the noise that around me. I attended the concert on October 5 at 8:00pm. Contrapunctus XIX, from The Art of the Fugue, BWV 1080 by Johann Sebastian Bach, Metamorphosen by Richard Strauss and Symphony No.7 in A major, Op.92 by Ludwig Van Beethoven were performed.

Don't use plagiarized sources. Get your custom essay on
“ Concert Attendance Report ”
Get custom paper
NEW! smart matching with writer

The style of Contrapunctus XIX, from The Art of the Fugue, BWV 1080 is set progresses to double, triple, and mirror fugues, culminating in a quadruple fugue. Metamorphosen is a memorial elegy. Symphony No.7 in A major, Op.92 is in four movements, Poco sostenuto – Vivace, Allegretto, Presto and Allegro con brio.

Contrapunctus XIX, from The Art of the Fugue, BWV 1080 is an unfinished work by Johann Sebastian Bach.

The Art of the Fugue is a set of fugues of increasing complexity using every theoretical device. The set progresses to double, triple and mirror fugues, culminating in a quadruple fugue that was incomplete because of Bach’s death, and his son arranged for him. Bach is the Baroque composer. Contrapunctus XIX was incorporating counterpoint, and explicitly and systematically explored the full range of contrapuntal. The volume of this piece is soft. Its tempo is Adagio or Lento (slow). Its contour repeated pitch melody, direction is static, and had a narrow range.

Its rhythm is alternation of tension and relaxation. It is a strophic form. It is a classical music.

Metamorphosen by Richard Strauss. This piece uses as its primary motivic element a passage from the funeral march in Beethoven’s Eroica Symphony. Its tempo is andante (at leisurely walking speed). Its volume is crescendo (becoming louder). Its rhythm is alternation of tension and relaxation. Its contour jagged melody, direction is static, and had a wide range. It is a repetition and contrast which is ternary form. It is a romantic music.

Symphony No.7 in A major, Op.92 by Ludwig Van Beethoven. The Seventh Symphony is in four movements. After a slow introduction (as in the First, Second and Fourth Symphonies) the first movement is in sonata form and is dominated by lively dance-like rhythms. The second movement, in A minor, is “slow”, although the tempo marking is _Allegretto_ (“a little quickly”), making it slow only in comparison to the other three movements. This movement was encored at the premiere and has remained popular since. The ostinato (repeated rhythmic figure) of a quarter note, two eighth notes and two quarter notes is heard repeatedly.

The third movement is a scherzo and trio. Here, the trio (which is based on an Austrian Pilgrims’ hymn[2]) is played twice rather than once. This expansion of the usual A-B-A structure of ternary form into A-B-A-B- A was quite common in other works of Beethoven of this period, such as his Fourth Symphony and String Quartet Op. 59 No. 2. The last movement is in sonata form. Donald Francis Tovey, writing in his _Essays in Musical Analysis_, commented on this movement’s “Bacchic fury”. Its volume is crescendo (becoming louder). Its rhythm is tension. Its contour jagged melody, direction is upward, and had a wide range. It is a repetition and contrast which is ternary form. It is a classical music.

I enjoyed the concert so much because I like Beethoven’s music, and I am so happy to see such a large orchestra! I have never seen it before. I am looking forward to attend it again. 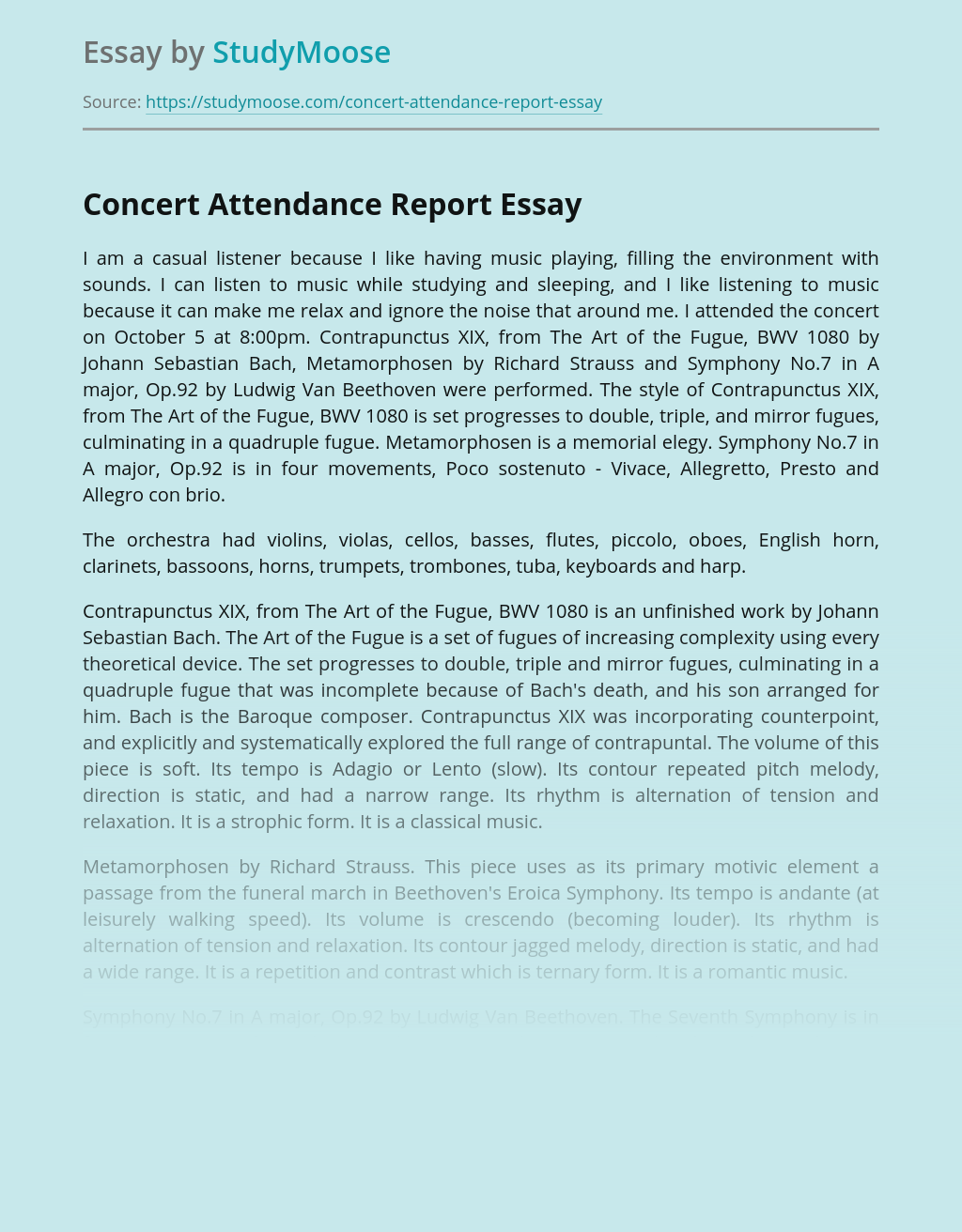