Chris Mccandless' Death "Into the Wild"

Many people have come to the conclusion that Chris McCandless’ untimely death was a result of his arrogant nature or a possible psychological disorder. However, his death was caused by a simple mistake, his lack of geographical knowledge, and his desire to find himself. When Krakauer’s moving article in Outside magazine was published, copious amounts of hate mail was received regarding McCandless’ cause of death. Initially it was believed that he mistook two similar plants, the wild potato and the toxic wild sweet pea, then accidentally poisoned himself when consuming their seeds.

Don't use plagiarized sources. Get your custom essay on
“ Chris Mccandless’ Death “Into the Wild” ”
Get custom paper
NEW! smart matching with writer

Alaskan residents dubbed McCandless as “ignorant” and “unprepared” for supposedly confusing the similar plants. After further research Krakauer discovered that McCandless was poisoned by the wild potato plant’s seeds, which were not described as toxic in any published text.

This ill-fated blunder does not show incompetence specific to McCandless, as most people would have made the same decisions. There have been scores of young men lacking common sense who wander out into the wilderness to attain meaning and do not return.

Several of them, including John Waterman and Carl McCunn, were similar to Chris, but in pivotal ways their stories were deviating. John Waterman was severely traumatized and obviously mentally ill. Chris was neither of those things. Additionally, Chris was not expecting to be rescued after making a dim-witted mistake, like Carl McCunn. Krakauer stated that “It is not unusual for a young man to be drawn to a pursuit considered reckless by his elders.”

Chris may have lacked some common sense, but conceited qualities did not contribute to his downfall.

His drive to push himself past his limits contributed to his demise, not superciliousness. Perhaps the most tragic notion of McCandless’ death is how simply it could have been avoided. Unbeknownst to Chris, there were multiple cabins a few miles from the Fairbanks bus 142. Each was stocked with food and survival supplies. This knowledge could have easily prevented his death. Crossing the Teklanika River was one of the important factors that inhibited McCandless from leaving the wild.

He was not aware that downstream in the vicinity of the bus there was a gorge that allowed safe transit across the river. A gauging station was also close by. It would have allowed him to cross the river with ease since hunters had placed the basket on the bus-side of the river. It is overwhelming to imagine the extents to which McCandless suffered physically and mentally, when salvation was so near to him. A simple topographic map would have almost certainly saved his life. McCandless was not arrogant, a sociopath, or an idiot, like so many have stated.

He may have lacked the common sense to buy a map, but was in no way incompetent. He also made some mistakes that anyone who was not a trained botanist would have made, and was like many young men in that he pushed himself to the extreme limits. Chris McCandless’ story is not unique because he ventured out into the unforgiving wild. It is captivating because McCandless gave up everything to find himself, even if he ended up being lost on the way.

Chris Mccandless' Death "Into the Wild". (2016, Nov 10). Retrieved from http://studymoose.com/chris-mccandless-death-into-the-wild-essay 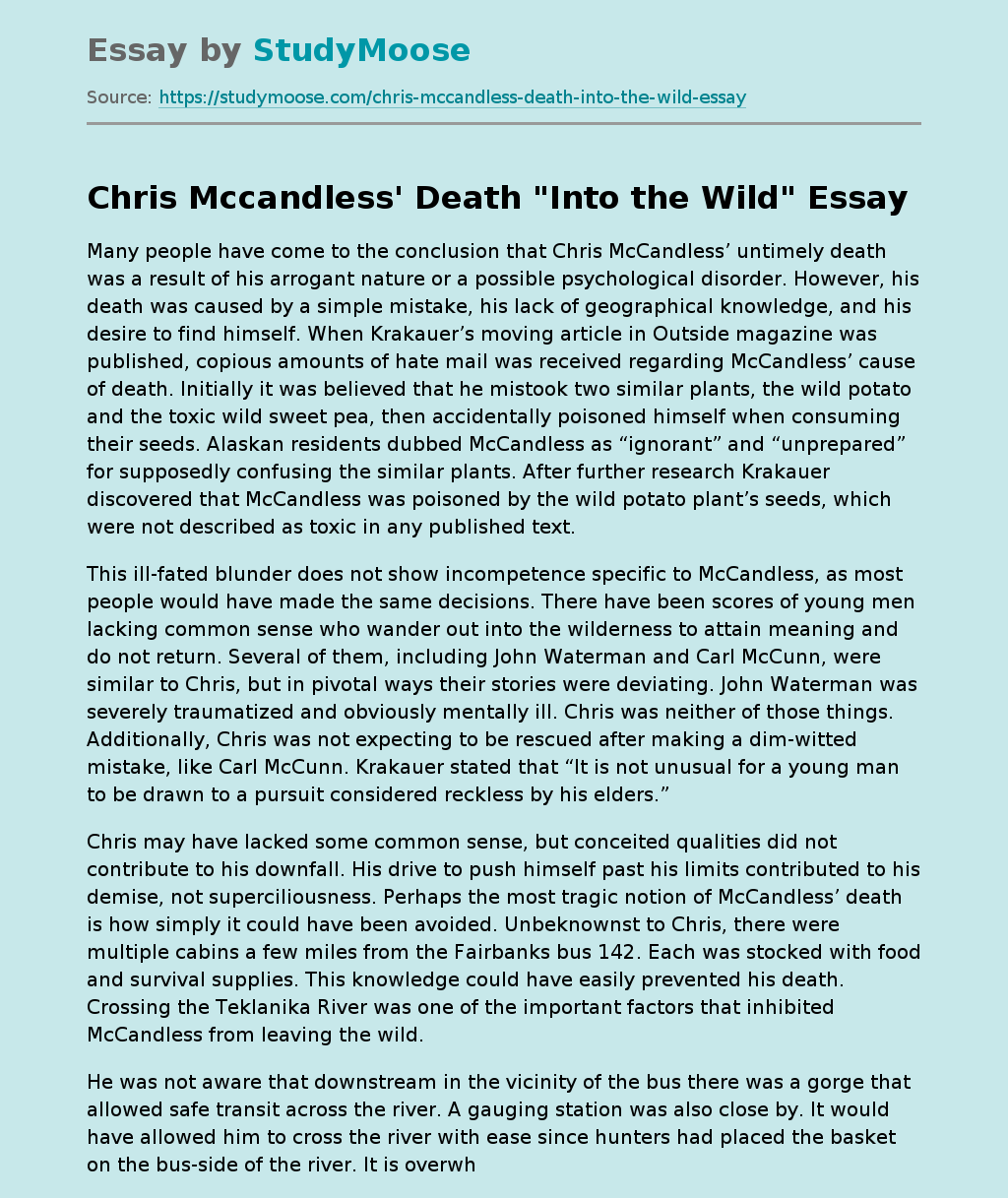