Shakespeare’s characterization of Gertrude and Ophelia in Hamlet is paradoxical as it challenges as well as complements the contemporary social traditions and norms. Gertrude is the best example of this paradox that is manifested through her extraordinary supremacy over all the major characters of Hamlet, her influence in the court matters and state affairs and her blind obedience to Claudius. Ophelia is also active in her domestic domain but her interest are restricted to amorous and matrimonial maters only and they are further directed by his father Polonius and brother Laertes.

Don't use plagiarized sources. Get your custom essay on
“ Character Traits of Shakespeare’s Gertrude and Ophelia ”
Get custom paper
NEW! smart matching with writer

She is an epitome of traditional feminist expressions of the age that require chastity, compliance and acceptance of male dominancy from women. Gertrude influence is wide ranging as it encompasses the domestic as well as the state affairs. Simultaneously she manifests the behaviour that is in consonance with the contemporary traditional view. She has the ability to captivate, fend off, or manipulate all important male characters for her own interests.

Act 2, scene 2, clearly manifests how Gertrude behaves authoritatively with Rosencrantz and Guildenstern and with Polonius.

This scene further depicts her interaction with Claudius and influence she possesses over Claudius. But she further exhibit the behaviour hat is an embodiment of Elizabethan socio-cultural milieu and its values. She is subservient to Claudius when she agrees to Claudius’ plan to trap Hamlet, ‘I shall obey you,’ (3. 1. 37). Again in the closet scene, she is in compliance to Hamlet’s orders; ‘What should I do? ’ she asks (3. 4. 181). Furthermore, despite Gertrude’s conformist female acquiescent behaviour, her excessive sexuality and lust makes him a non-traditional woman.

This portrayal of Gertrude clearly challenges the social and ethical norm of Elizabethan society. Her sexuality is intimidating for both Hamlets, father and son, who consider it brutal, extreme, and tainted: ‘Nay, but to live/ In the rank sweat of an enseamed bed,/ Stewed in corruption, honeying and making love/ Over the nasty sty’ (3. 4. 92-95); Again it is said; ‘ So lust, though to a radient angel linked,/ Will sate itself in a celestial bed And prey on garbage. ’ (1. 5. 55-57). These lines are not in conformity with the woman image of contemporary society where woman’s chastity was the first condition for her social recognition.

The relation of Hamlet and Gertrude is marked with oedipal connotations. Hamlet is placed in a situation his unconscious incestuous inclinations are juxtaposed with the apparent incestuous relationship of Gertrude and Claudius who is a new father figure to him. This juxtaposition and presence of Oedipal feelings plays an important in changing Hamlet’s behaviour toward his mother. Ophelia is raised in a motherless environment so she was dominated by the mannish thought and authority from the earliest. Thus her character is formed to accept the demands and wishes external to her own self.

Furthermore, Shakespeare characterization of Ophelia is influenced by the cultural tradition of the male-dominant Elizabethan society. Ophelia is a typical character that is a mirror image of contemporary society. She remains passive in the domestic and emotional domain. Ophelia has no identity of her own and all her domestic and amorous matters are directed by her father. Polonius endeavours to fashion the life and attitude of Ophelia according to his own wishes. He considers his desires as her desires and tries to tailor her approach by various means.

So right from the very start, Ophelia is under the sway of Laertes and Polonius. So her character is in complete conformity with the traditional values of that time. Polonius always responds from a position of authority over Ophelia, emphasizing his power as the decision-maker for her. Both her father and brother have a self assigned task of directing Ophelia how to act properly in every domain of her life. Although Shakespeare has characterized Ophelia as inferior to male characters, but characterization of Gertrude has dual characteristic.

Sometime it challenges the traditions of the conformist society and sometime it itself become conforms to the values of the society by acting passively. Although Gertrude and Ophelia are two different women but they are caught in the same dilemma and circumstances in relation to Hamlet. Both love Hamlet and suffer due to their relation with Hamlet. Although Gertrude follows the bidding of Claudius throughout the story, and cannot even effectually resist Polonius, she evinces a deep love for Hamlet. She almost lives by looking at Hamlet.

The contempt and hatred of her beloved son cut her to the quick and drives her to the very verge of madness. It must be noted that when Hamlet’s upbraiding grows unbearable for the queen, the ghost of his father steps in to save Gertrude from a further expression of their son’s bitter hatred. Shakespeare has characterized her as a round character that develops herself as the play moves toward its end. Although she acknowledges her blunders but is not fully aware of its overall gravity and effect on Hamlet. She says to Hamlet; O Hamlet, speak no more!

/ Thou turn’st mine eyes into my very soul,/ And there I see such black and grained spots/ As will not leave their tinct. (3. 4. 89-92) Same happens with Ophelia as Hamlet is harsh to Ophelia. He charges her with unfaithfulness. Polonius and Laertes warn her of excessive indulgence in amorous affair with Hamlet. Although she is caring and loves her family i. e. Polonius and Laertes but her love for Hamlet was stronger than her discretion. So she “sucked the honey of his music vows”, (3. 1. 57) and that his loss to her madder her “of ladies most deject and wretched”. (3. 1.

56) We know that her love for Hamlet was not so strong yet queen hopes in vain that her virtues “Will bring him to his wonted way again. ” (3. 1. 41) Both Gertrude and Ophelia do not direct or affect the course of events directly but their role is of considerable importance for understanding the character of Hamlet. Hamlet at once intensely Gertrude and passionately hates her. Same is the case with Ophelia. Hamlet loves him fervently and in an honourable way as Ophelia declares early in the play; My lord, he hath importuned me with/ In honourable fashion. (1. 3. 100-111)

Later in the play, Hamlet communicates his feeling toward her in this way on her grave; I loved Ophelia; forty thousand brothers/ Could not, with all their quantity of love,/ Make up my sum, (5. 1. 269-271) There are some visible differences between Gertrude and Ophelia as mentioned above but there subtle and implicit differences too. One of these differences is their attitude toward faithfulness. Gertrude seems unfaithful whereas Ophelia embodies the spirit of Elizabethan concept of fidelity. Gertrude is an instrument of, and incentive towards, crime; she is not criminally involved herself.

The only exception to this the fact that by consenting to marry Claudius only such a short while after the death of her husband, she betrays either the greater infirmity of will, or an abnormally high degree of sexuality. The ghost makes it clear that Gertrude was neither an accessory to the murder nor even aware of it. We can call her a weak woman, not a wicked or depraved woman. The ghost styles her ‘seeming virtuous’. Hamlet forces her to search her heart. Then she is able to see how shameless and offensive to good sense and modesty her ‘over-hasty marriage’ was.

It is quite clear that Ophelia is constant in her faithfulness to Hamlet as well as to her family. This tussle between love and duty plays some part in her loss of sanity. She is devotedly fond even of his tyrannical father and listens meekly to her brother’s precepts and promises; “I shall the effect of this good lesson keep/ As watchman to my heart”. (1. 3. 45-46) As in all things she obeys him, no matter how much it costs her to disobey the promptings of her heart. She also becomes an instrument for spying on the prince.

But on the other side her love and fidelity to Hamlet remains the strongest factor in her life. Although she never declares her love in so many words, yet we know that her heart was given entirely to him. This is a manifestation of divergent rather conflictive faithfulness that she to his lover and family. Despite this intricate environment, she never betrayed her family as well as Hamlet. Another important contrast is their strength of character in reacting to this complex situation. Gertrude remains stable in this state of affairs due to her strong characterization but Ophelia turns mad and behaves like childlike.

Thus she becomes the most pathetic of Shakespeare characters. Unlike Gertrude she possesses a childlike simplicity and maintains it throughout the play. So Shakespeare dramatic realism has produced a character full of pathos and miseries in the form of Ophelia and has used it effectively, like Gertrude, in the overall design of the play. As above-mentioned claims supported by textual and extra-textual facts clearly reveal that both Gertrude and Ophelia have certain common characteristics but they were not certainly identical characters.

Both are used as subsidiaries to the main characters. Shakespeare skilfully takes advantage of their presence in the play and uses them in the larger design of the play. He further shows different manifestation of human character through them. Although both remain a prey to same dilemma and to an almost same fate in the play but as both have different dispositions and socio-cultural upbringing so they react differently to the situations and they have different roles to play in the play. 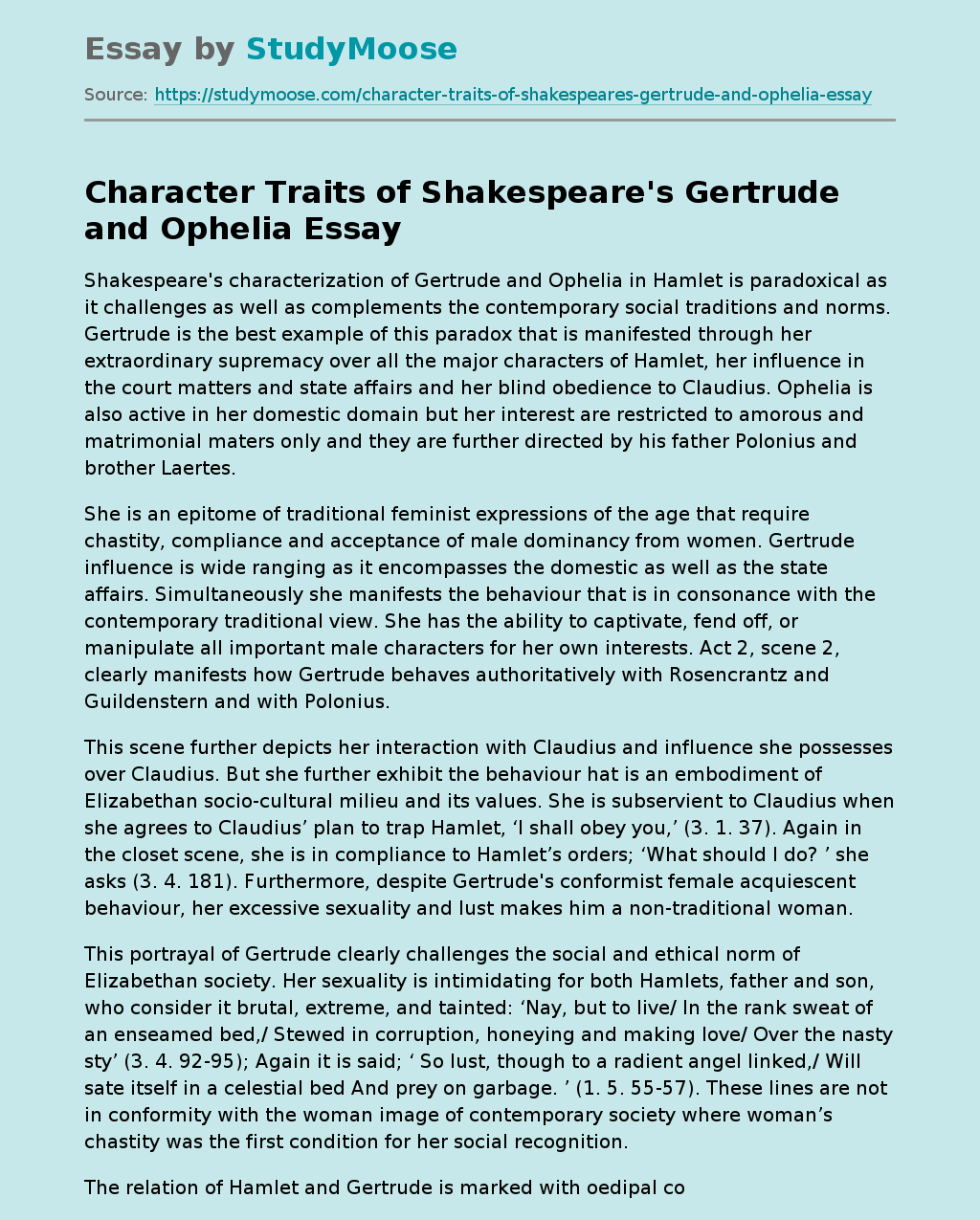