During the lifetime of Mary Shelley, the onset of industrialization had just begun in England, as it grew rapidly throughout europe, creating capital. Although class conflict had just begun, it is possible to view some characteristics of classes when analyzing the novel Frankenstein.

Victor Frankenstein himself symbolizes the bourgeoisie, whereas his monster is more similar to the proletariat. Frankenstein’s wealth and family background plays a key role. It is stated in the book that he’s from one of the most distinguished families residing in Geneva, and how his ancestors served as counsellors and syndics for many years and how honorable and reputable they are.

Don't use plagiarized sources. Get your custom essay on
“ Character of Victor Frankenstein in Novel “Frankenstein” ”
Get custom paper
NEW! smart matching with writer

(Shelley, 40) Coming from an acclaimed, rich family is a common characteristic of the bourgeoisie and Victor. There is a definitive struggle between the two forces, with Frankenstein enjoying the power he holds, and exploiting the “lower class” meaning his creation, the creature. Frankenstein becomes consumed by his creation, devoting all his time, energy and health into creating it similar to how an owner of a means of production would devote himself to his product.

Because of this situation, it’s unlikely to think that Victor Frankenstein actually represents the lower class. Money is what drives people, it is the definition of success, it is what makes an individual respectable among the community. The creature, to Frankenstein represents the key to his ultimate glory. It’s creation will not only cause many advancements in terms of science and biology, but it will also grant money, respect and fame to its creator.

From this point of view, we can see that the creature symbolizes the product, but if we were to look from another perspective we can identify the creature as the working class, which is an easier thing to do.

The Creature is a massive, ugly and a strong being with inhuman abilities who is isolated from the society. It’s created by the wealthy Frankenstein, just like how the proletariats were “created” by the bourgeoisie. On one hand, the creature’s ugliness may be coming from the fact that it was created by using different parts of many corpses, just like how proletariats are made out of all classes of the population (Marx, 5) It’s size on the other hand may resemble the quantity of the proletariats since the community is mostly made out of laborers. It’s strength on the other hand may be symbolling the potential of all of the laborers combined, since it’s acknowledged by Marx and Engels many times in The Communist Manifesto that if the proletariats were to unite against the system, their actions towards the state would be unstoppable because they have nothing to lose while fighting for equality. An example to such quotes is how Marx acknowledges the proletariats may be freed from their conditions only if they forcibly overthrow all existing social conditions. (Marx, 17) The isolation of the creature also may resemble the alienation of a laborer. The Creature starts to experience the kind of exclusion that Marx describes the worker experiences on a daily basis. However, the proletariat becomes aware of the differences that inhibit elevation to the status of the bourgeoisie. Any human being surely wouldn’t wish to live as someone whose only goal is to make someone else profit, or serve another for the rest of their life. The creature accuses his creator for putting him in his position by creating him, resembling the reproachment inside a proletariat. “Cursed, cursed creator! Why did I live? Why, in that instant, did I not extinguish the spark of existence which you had so wantonly bestowed?” (Shelley, 116) This quote represents the relationship between the monster and it’s creature as well as it also represents the relationship between the bourgeoisie and the proletariat.

Eventually, after the reproachments of the creature Frankenstein loses the control he had (or he thought to have) over his creation, as it begins to harm the loved ones of Victor. This can be found similar to the loss of control over the proletariats that the bourgeoisie used to have. “Modern bourgeois society is like the sorcerer, who is no longer able to control the powers of the nether world whom he has called up by his spells” (Marx, 4).

The implications, or rather the mentionings of “class struggle”, surely strengthens the main points of the novel Frankenstein. The novel mostly focuses on the dangers and consequences of one’s isolation from society. As mentioned earlier, the creature of Frankenstein is cast aside by its creator and almost every individual it encounters and meets. Although it is at least as intelligent and has many desires like friendship or love just like any human being, because of its frightening and zombie-like appearance, nearly no one accepts it. As a result, it feels left out and this causes anger. Eventually this aggression causes it to harm and revolt against those who reject, oppress and mock it. This turn of events is very similar to the struggles and the ultimate rebellion of the proletariat. The usual exploitation of the working class by the capitalist bourgeoisie creates great resentment which leads to the revolution against the holders of the means of production. (Marx, 5) 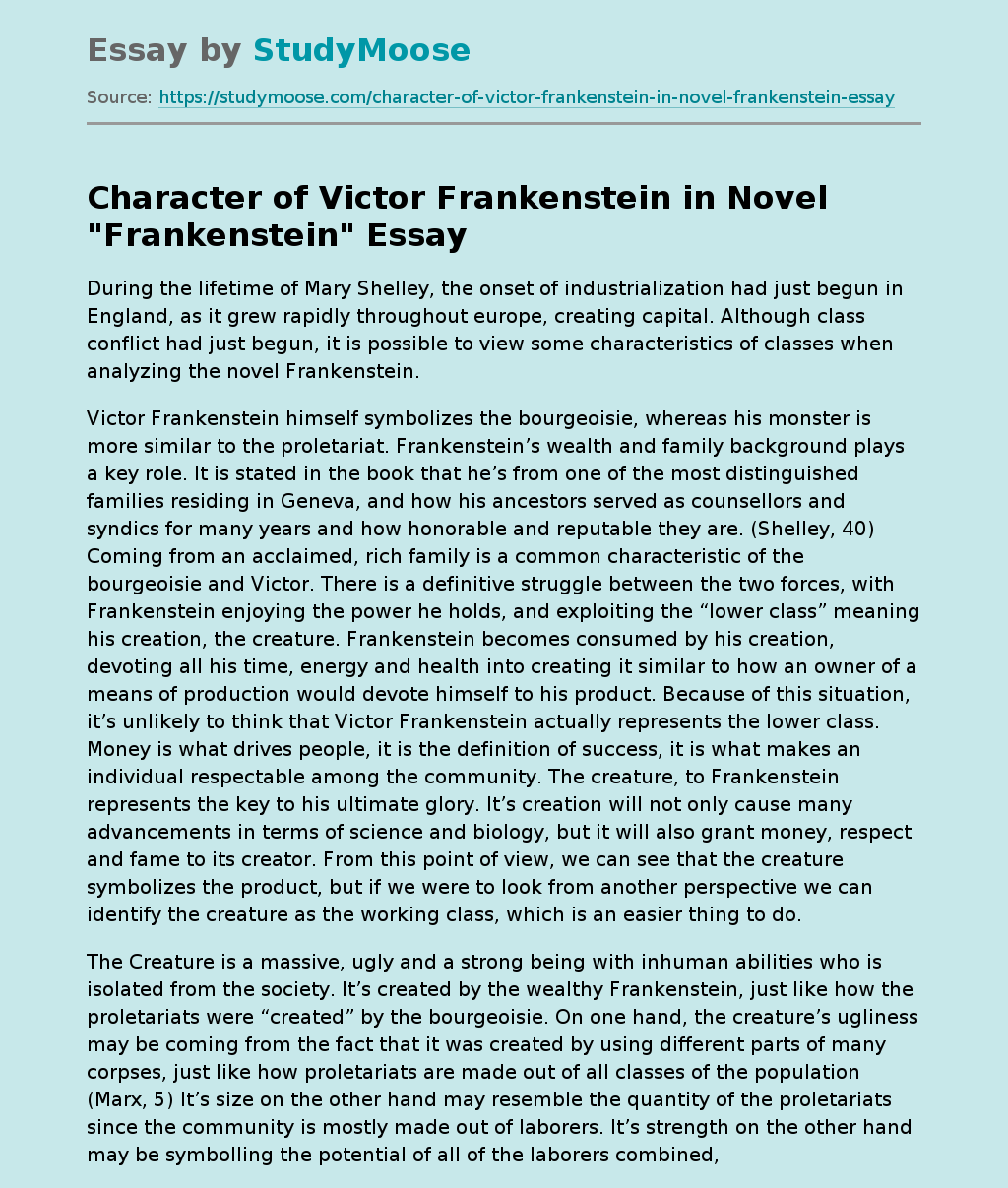