Victor Villasenor is, certainly, one of the most famous and beloved authors who has presented his raw and unexpected memoirs to public opinion. Actually, the book explores Victor’s transformation from embarrassed and intimidated young boy into the famous writers of the present world. Thus, his memoir “Burro Genius” describes difficult life of poor Mexican American boy having been always faced with constant discrimination in his local school system. Villasenor vividly presents struggle between him and teachers and emphasizes the role of parents and God for overcoming all difficulties.

Don't use plagiarized sources. Get your custom essay on
“ “Burro Genius” by Victor Villaseñor ”
Get custom paper
NEW! smart matching with writer

Special attention is devoted to spiritual connections with god. It is necessary to say that Villasenor describes his masterpiece as real miracle. (Villasenor 2004) Villasenor says when he stood at the podium facing a group of teachers, who always harassed and discriminated him; he became really furious and enraged with such unfairness. Despite the fact that the boy had never spoken to the public, Victor’s mind was filled with doleful and sorrowful childhood recollections associated with constant misunderstanding, humiliation and power abuse.

Victor’s heart was thumbing, though he started his impressive speech about all the incidents taken place during his entering local school. It is mentioned in the book that some listeners couldn’t help but shedding tears. (Villasenor 2004) This is a mournful beginning of Villasenor’s memoirs. The author appears highly talented and imaginative playing with words and sense. For example, he vividly amplifies how he has coped with untreated learning disability meaning that he has diagnosed as dyslexia.

Furthermore, the book provides impressive descriptions of frustrations of his life as a Latino boy.

He says that American school system has failed to comprehend cultural understanding and has failed to deal properly with Hispanic students. (Villasenor 2004) The author admits that he is born and raised on San Diego County and thus he devotes certain part of the narration to description of several surrounding cities: streets where cattle and domestic animals are seen; dusty roads adapted for horse-riding.

Nevertheless, still he remains away from his childhood memoirs not to disturb the picture of quiet life. His memoirs are developing with essay progression; they are filled with lifted spirit of a child, with fears and terrors of classmates and teachers. However, special role is devoted to illustrating racism being able to chill anyone. (Villasenor 2004) Victor says he was often slapped by instructors and kicked by classmates only because of being Mexican guy. Moreover, the boy was considered the stupidest child in the class.

Apparently, the author raises important themes not only for his time, but also for present world, because the problem of cultural discrimination and racism touches not only the USA, but the rest of the world. Nowadays many foreign students are suffering from hostile attitudes of native students. Therefore, the author sensitively describes all his hardships, privations and difficulties at school. (Villasenor 2004) It is impossible to remind indifferent when the author describes his rage and says he even “contemplated killing some of his teachers and classmates with a firearm”.

Such statement seems to be used ironically and his infuriating energy has now changed. It is necessary to suggest that Villasenor is one of the first to raise the problem of cultural discrimination so openly and bold. Actually, teachers in both public and private schools, according to the author, practiced violent abuse and brainwashing tactics to intimidate and to discriminate foreign students. (Villasenor 2004) The boy was often treated as “dirty” Mexican being ugly and unworthy as well. Certainly, boy’s psychological development was upset and the boy has distorted perception of reality.

Victor realized that all those characteristics were referred to his family members as well. For example, teachers said his mother was ugly, his father was loud and dirty. As it is mentioned above the boy was often beaten, because his English was poor. Therefore, Victor was forced to be really ashamed of his nationality and heritage. Furthermore, his cultural values and tight-knit family were questioned. Victor’s growing frustration fueled his desire to become a writer and to reveal the truth about racial discrimination in public schools. (Villasenor 2004)

Nevertheless, the positive moment of the book is descriptions of constant family love and support, especially the role of father and brother in Victor’s life. The author mentions that it is his father who helped him to eliminate false notions and to move forth. The struggle with Mexican culture is seen throughout the whole book and the boy seems to be proud of his family, whereas he is ashamed of being Mexican. Apparently, Victor considered brown skin as crime. (Villasenor 2004) Communicative bonds with nature and Gods are amplified after death of Victor’s older brother.

For example, the boy sees trees, stars and moon as a magical encounter existing between humans and nature. Further, he begins to believe in the supernatural and his intuition is strong. Therefore, it is the main reason why the child’s imagination overwhelms book’s narration. From the very beginning Victor considered himself as a spiritual person being devoted to religion and God. He describes Navajo as “like perspective on the natural cycle of life and being one with nature”. (Villasenor 2004) “Burro Genius” makes readers analyze and think of their own childhood, past and present.

Furthermore, readers are forced to reflect how words are able to affects psychological development of a person. It is known that ruler- striking teachers don’t exist in the country, although author assumes that racism exists, though its forms had been changed: “Now teachers are more concerned with how to separate students so that they don’t taint the school’s test scoring system”. (Villasenor 2004) Apparent strength of the book is that the author strongly defends his positions regarding culture and religion. References Victor, Villasenor. (2004). Burro Genius. New York: Rayo. 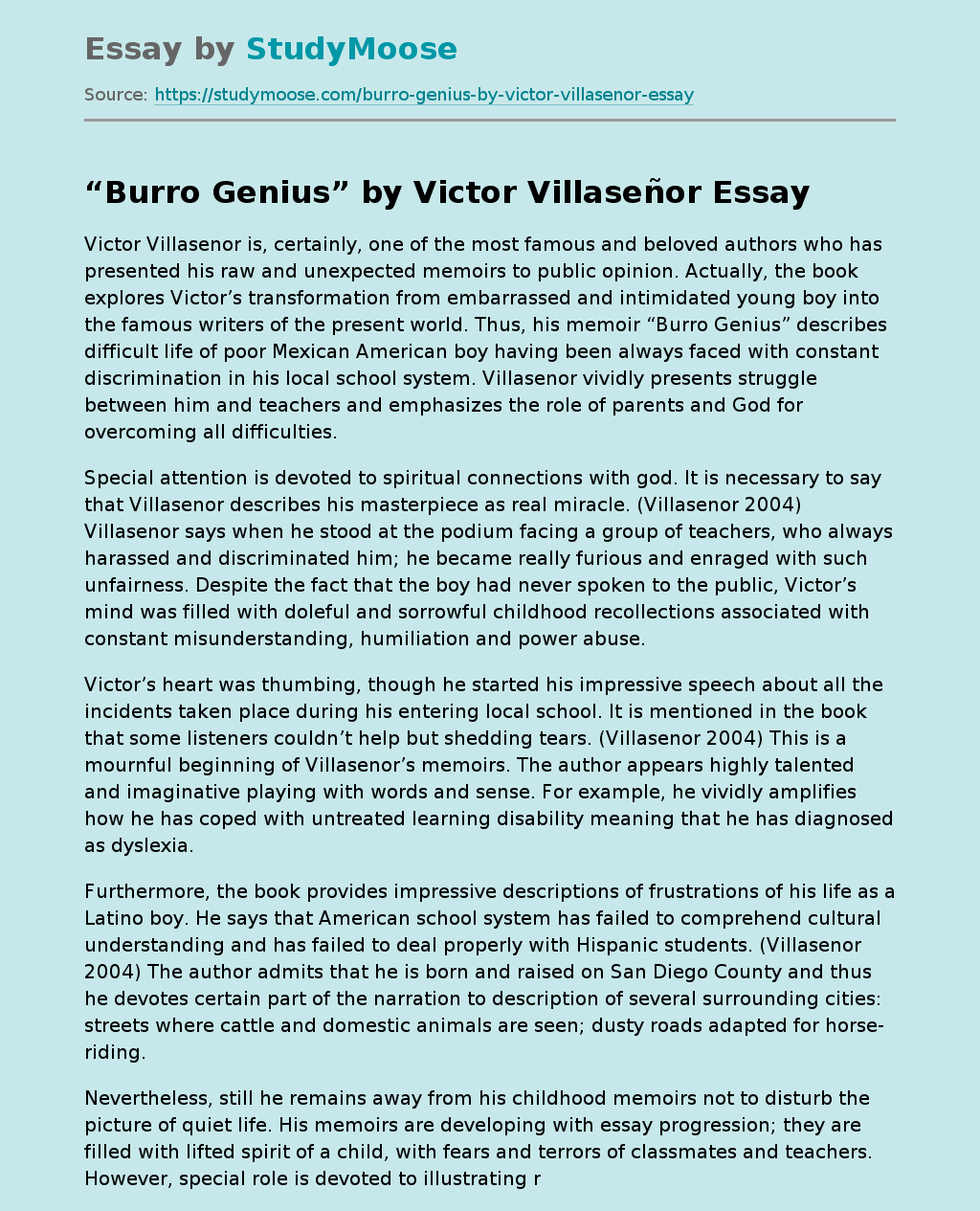