Albert Camus’ story “The Guest,” takes place in the rough terrain of Algeria at the end of World War II. Algeria, under French control at the time, was very tense due to civil unrest of the Arabic people. The protagonist of the story is Daru, a solitary French schoolteacher who lives at a school on a remote plateau that has been deserted due to a freak snowstorm after eight months of drought. Two minor characters, a French policeman, Balducci, and an Arab prisoner arrive at the school.

Turn in your highest-quality paper
Get a qualified writer to help you with
“ Character Analyzation “The guest” Albert camus ”
Get high-quality paper
NEW! AI matching with writers

Balducci commands Daru to deliver the prisoner to nearby authorities but Daru has a conflict over the decision of whether or not to take the Arab to prison. In the end, Daru leaves the decision up to the Arab.

The Arab, being a flat and seemingly static character, somehow contributes significantly to the existentialistic nature of Daru’s character and his actions. The author, an existentialist, tells the story with an indirect presentation. The central idea appears to be there is an inherent conflict between what different cultures view as morally right.

We will analyze how the round/flat and dynamic/static qualities of the characters as well as the presentation affect the story’s central idea.

Daru’s character, as the protagonist, is very round. In this story, Daru lives at a remote and solitary schoolhouse plagued by silence. Daru is confronted by the decision of whether or not he should deliver an Arab prisoner to the French authorities. We learn the prisoner is in custody for murdering his cousin over grain owed.

The flat character, Balducci, represents the French authority and its moral code; while the Arab’s culture seems to permit this act: “His village was beginning to stir; they wanted to take him back” (105). Balducci gives his fellow Frenchman Daru an obligation to deliver the prisoner.

Daru, who is utterly disgusted by the actions of the Arab, does not want to take him to police headquarters because of his existentialist beliefs: “Every bit of this disgusts me, and first of all your fellow here. But I won’t hand him over” (106). “That man’s stupid crime revolted him, but to hand him over was contrary to honor” (110). We can see that Daru is torn between what is actually right or wrong. He wants the Arab to run because he doesn’t want to make the choice himself. “He was amazed at the unmixed joy he derived from the mere thought that the Arab might have fled and that he would be alone with no decision to make” (107).

Daru’s character is very dynamic. At first he refuses to bring the Arab to justice due to his existentialist beliefs. We can tell that Balducci looks down on the Arab while Daru, views him more humanely. Daru insists that the Arab doesn’t need to be tied up. Balducci’s character is static. He claims he doesn’t like putting ropes on prisoners but concludes by saying “But you can’t let them have their way” (106). Daru insulted Balducci by not wanting to comply with him. Later remembering Balducci’s farewell, he reveals “He had hurt him, for he had sent him off in a way as if he didn’t want to be associated with him,” and “he felt strangely empty” (110). The Arab’s character remains somewhat static throughout the story. The Arab got up several times the night before, as if almost wanting to escape, but came back in. With the task of delivering the prisoner at hand, Daru’s final choice is to let the Arab choose his own fate, which was totally not what Balducci intended. The Arab does what he feels is right, or what he feels the governing society feels is right. He complies with French law, while ironically, Daru didn’t.

The presentation is also very important in supporting the central idea of this story. A major revolt against the French colonists was about to take place. French control and law was in question. Should one culture be able to dictate laws upon another culture just because it is temporarily the governing body? In the meantime, Daru cooked for the Arab and ate with him, showing him trust and compassion. The Arab was surprised that Daru was eating with him. We can tell the Arab was scared and wanted Daru to go with him. During bedtime, Daru slept naked near the prisoner. This shows that Daru was letting down his guard: “Men who share the same rooms, soldiers or prisoners, develop a strange alliance as if, having cast off their armor with their clothing” (109). He watched as the prisoner quietly crept out of bed. The Arab was very nervous and got up several times, but Daru didn’t do anything. He was still hoping the Arab would escape so he wouldn’t have to deal with the whole situation.

The next day the two hiked down the plateau towards the jailhouse. There, Daru showed the Arab the path to the prison, but also showed him the way towards pasturelands where nomads lived: “They’ll take you in and shelter you according to their law” (111). The Arab ultimately chose the fate that French law had dictated. When Daru went back to the schoolhouse, he read a message on the chalkboard, “you handed over our brother, you will pay for this” (111). Here again, we see a conflict of views. Daru, upon not making a choice, inadvertently committed a crime amongst those people. Throughout the story, Daru referred to the Arab as the “guest.”

The irony of this story is Daru is actually the stranger in a strange land while we might perceive the Arab as the “guest.” In conclusion, we see that different cultures have conflicting views about what is right and what is wrong. As an existentialist, Daru let the Arab decide his own fate. Daru felt if he took the Arab to jail, it would be wrong. He also felt if he told him to go free, it would be wrong against the French authority. Because Daru acted by not acting, he unintentionally committed a crime against the Algerian people. Ironically, Daru was in a catch 22. 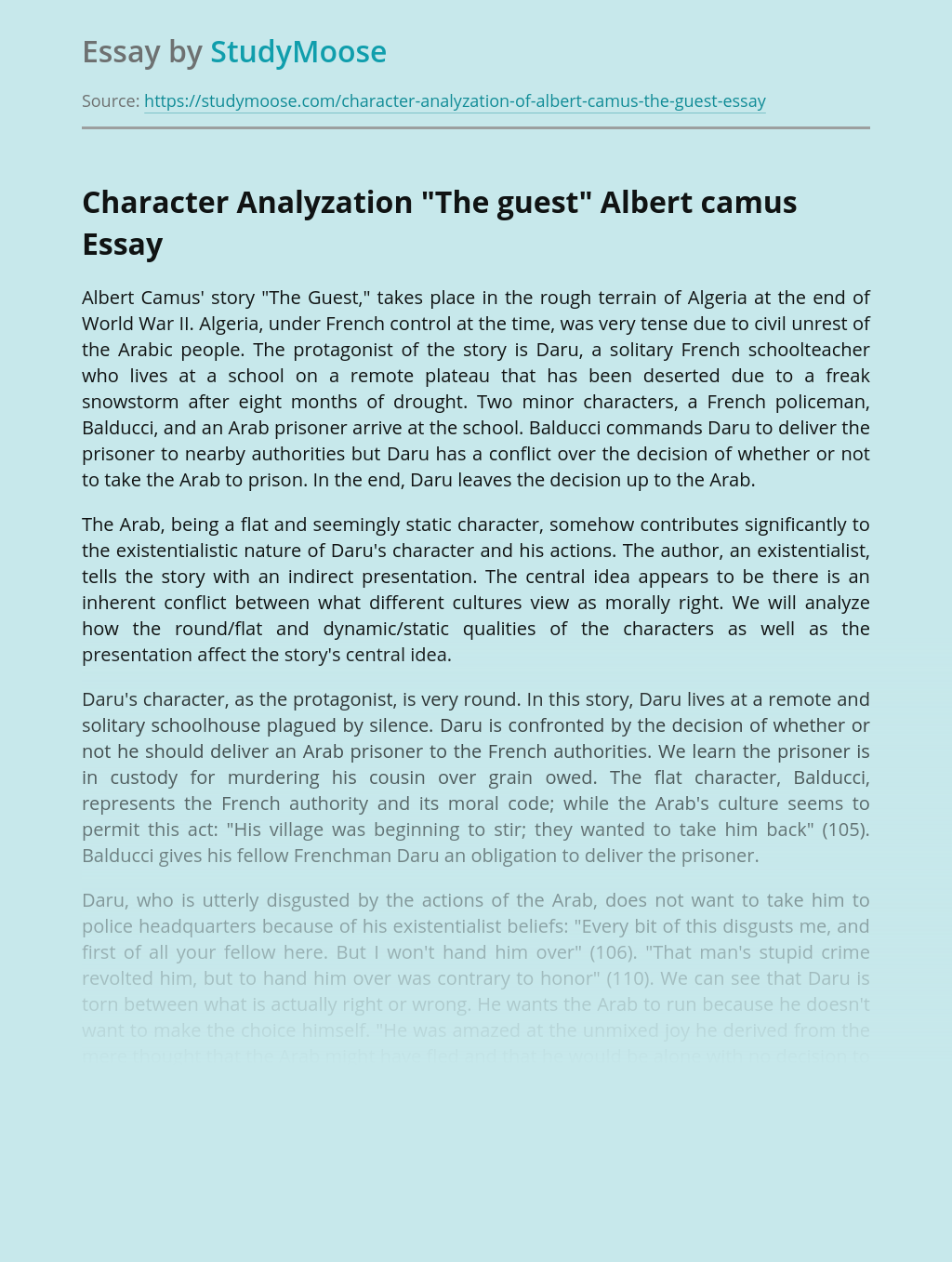 Turn in your highest-quality paper
Get a qualified writer to help you with
“ Character Analyzation “The guest” Albert camus ”
Get high-quality paper
Helping students since 2015
Stay Safe, Stay Original