Being a leader is in itself a challenge. The challenges of leadership are really of three kinds: external, coming from people and situations; internal, stemming from within the leader himself; and those arising from the nature of the leadership role.

It’s almost impossible to imagine a situation where a leader doesn’t have to cope with external challenges. In an organization, such issues as lack of funding and other resources, opposition from forces in the community, and interpersonal problems within the organization often rear their heads.

Don't use plagiarized sources. Get your custom essay on
“ Challenges of Leadership ”
Get custom paper
NEW! smart matching with writer

Social, economic, and political forces in the larger world can affect the organization as well. To some extent, the measure of any leader is how well he can deal with the constant succession of crises and minor annoyances that threaten the mission of his group.

If he is able to solve problems, take advantage of opportunities, and resolve conflict with an air of calm and a minimum of fuss, most of the external issues are hardly noticeable to anyone else.

Proficient in: Being A Leader

If the leader doesn’t handle external challenges well, the organization probably won’t, either. We’ve all seen examples of this, in organizations where everyone, from the director to the custodian, has a constantly worried look, and news is passed in whispers. When people feel that leaders are stressed or unsure, they themselves become stressed or unsure as well, and the emphasis of the group moves from its mission to the current worrisome situation. The work of the group suffers.

While leadership presents to each of us the opportunity to demonstrate the best of what we are, it also exposes our limitations.

In many cases, good leaders have to overcome those limitations in order to transmit and follow their vision. Fear, lack of confidence, insecurity, impatience, intolerance (all can act as barriers to leadership. At the same time, acknowledging and overcoming them can turn a mediocre leader into a great one. It’s often very difficult for people, especially those who see themselves as leaders, to admit that they might have personality traits or personal characteristics that interfere with their ability to reach their goals. Part of good leadership is learning to accept the reality of those traits, and working to change them so they don’t get in the way.

Sometimes, what seems to be an advantage may present a challenge as well. A leader who’s extremely decisive may alienate followers by never consulting them, or by consistently ignoring their advice. A leader who’s terrific at developing relationships with others in the organization may be unable to tell someone when she’s not doing her job. Some characteristics can be double-edged swords, positive in some circumstances and negative in others. The real challenge is in knowing the difference, and adapting your behavior accordingly.

Challenges Arising From Leadership Itself

Real leadership makes great demands on people. As a leader, you are responsible for your group’s vision and mission, for upholding a standard, often for being the group’s representative to the rest of the world and its protector as well. These responsibilities might be shared, but in most organizations, one person takes the largest part of the burden. In addition to its responsibilities, leadership brings such challenges as motivating people – often without seeming to do so – and keeping them from stagnating when they’re doing well. Leaders also have to motivate themselves, and not just to seem, but actually to be, enthusiastic about what they’re doing. They have to be aware of serving their group and its members and all that that entails. In other words, they have to be leaders all the time.

When Are the Challenges of Leadership Most Obvious?

One obvious – and correct – answer to this question is “all the time,” but in fact some times are more likely than others. Leadership is usually the most difficult when the situation is changing or unstable. When a grass roots group is doing well – gathering allies, getting its message across, attracting funding – no one much notices what the director does; but when something unexpected happens, she’s expected to take care of it, often in a very public way. Some particular times when challenges may arise: 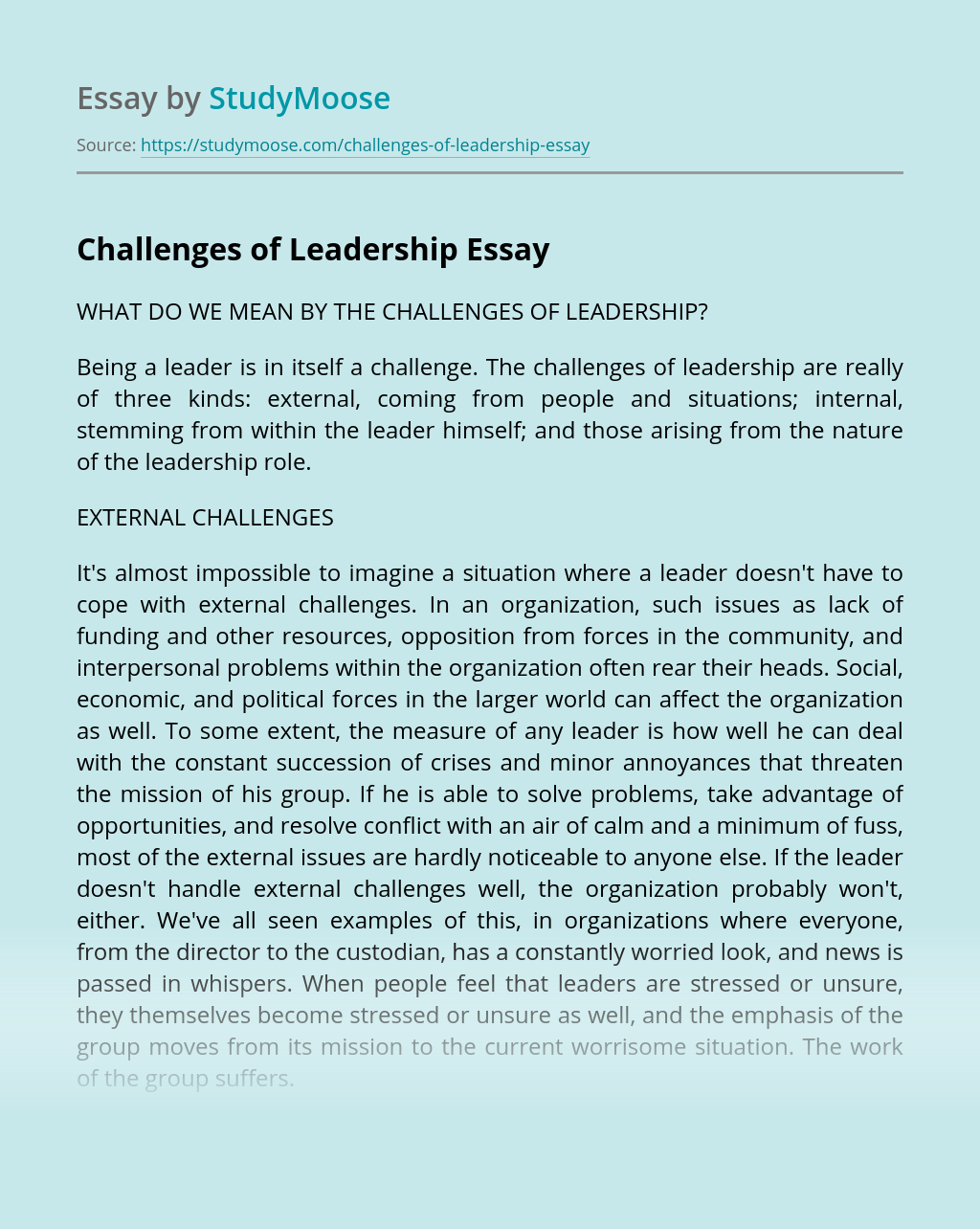