NanoGene Technologies, Inc is a life sciences start-up based on nanotechnology. The firm was founded by an unusually large number of people; five employees of the Eastern Institute of Technologies Advanced Materials Sciences Lab (AMSL). The founders worked in different sections of AMSL, but they were working on a set of technologies that were linked in the human genome project. Together, the founders developed techniques and compounds that caused the genes to ‘stretch out and straighten up’ making it much easier for labs to do the cutting and manipulation that is required in diagnostic testing.

Turn in your highest-quality paper
Get a qualified writer to help you with
“ NanoGene Technologies ”
Get high-quality paper
NEW! AI matching with writers

NanoGene planned to use this technology, which is owned by the Eastern Institute of Technologies, to begin to sell the patented substrate material to diagnostic testing labs around the world. As the business model of NanoGene formed, the founders decided to equally split the equity among the five members and all of them would have the same salary of $120,000. Will Tompkins, one of the founders, was named the CEO.

In the first year, NanoGene secured the required intellectual property to the technology by offering the Eastern Institute of Technologies 15% in equity and a 3% royalty on sales.

Will Tompkins used one of his contacts, an active angel investor, to obtain the angel funding of $600,000 at $2.25 million post-money valuation. The value proposition, customer segment, and revenue streams are fairly straight forward. NanoGene’s technology offers their target customers, diagnostic testing labs around the world, an easier and faster way to complete diagnostic testing. The sales of the substrate material will provide NanoGene with its source of revenue.

Currently, NanoGene is trying to recruit Paige Miller, a Havard Business School graduate who has been doing some consulting for NanoGene. Additionally, NanoGene is in their Series A funding.

NanoGene is looking to raise $10 million which will be sufficient to fund them for 18 months, to prove their technology, and to get them to a pilot production. At a meeting with a venture capitalist, NanoGene learned about the issues VCs have with the firm. The first concern the VCs have involves the founding team. The founding team is quite large, five members, and all of the founders are pure scientists with little to no business experience. Generally, the VCs invest in technology based start-ups with a founding team of two to three members.

Usually one of the founders has had experience driving the commercialization of technology, typically as a Chief Scientific Officer at an established firm. The unique size of NanoGene’s founding team and their lack of experience is an area of worry for the VCs. The VCs are also concerned about the founding team’s decision to compensate all founders equally. The scientists are splitting the equity evenly and are receiving a salary of $120,000 which is, at a minimum, $30,000 more than the annual salary of their former jobs at AMSL.

The founders have little to no background in business and have not been very professional as a team. In business, team members communicate and are not afraid to disagree with each other. With NanoGene, the founders want to make everyone happy. The scientist agreed to compensate equally since it would have been disruptive in their opinion to try to determine equity share and compensation based on a more complicated set of principles. Members didn’t want to upset the rest of the team. Additionally, the founders are already having disputes about how to compensate future employees.

Instead of increasing Tompkins salary and share of equity, NanoGene can compensate Miller. Installing Miller as the CEO will help solve the CEO payment issue and the lack of business experience found at NanoGene. At present, the founders may not be happy about their smaller share of equity and potentially lower salaries, but in the long run, the action of making Miller CEO will pay off. Miller has valuable knowledge of

in commercializing technology and running a business, and can guide discussions on the hiring process, the potential compensation policies, the company goals, and company culture. She will also bring the professional touch NanoGene needs. Miller is also one of the few people familiar with the technology and business ideas of NanoGene since she has worked with NanoGene in the past. Without Miller, NanoGene may not get the funding they need to continue as a company.

Another top priority of NanoGene is proving the technology. This can’t be done if there is no funding for the VCs. In the future, NanoGene should conduct more market research on diagnostic tests. Currently, NanoGene has a simple value proposition with a very general customer segment. NanoGene needs to identify specific customer segments of high growth and low competition. Research in other value propositions such as cost and accuracy will help also NanoGene’s profitability. 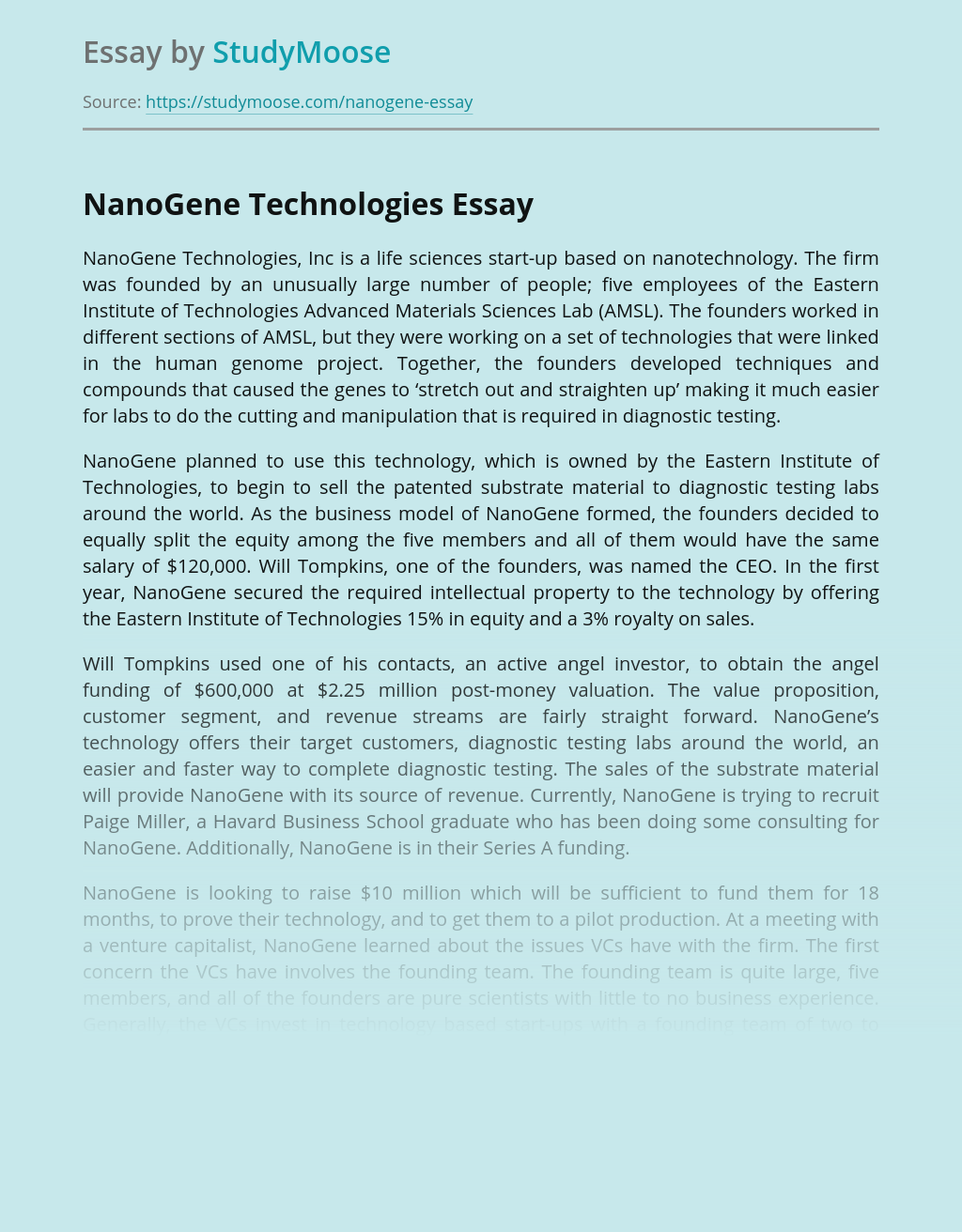 Turn in your highest-quality paper
Get a qualified writer to help you with
“ NanoGene Technologies ”
Get high-quality paper
Helping students since 2015
Stay Safe, Stay Original