Schapiro’s psychoanalytic approach, that is, his search for the underlying meaning and relevance to the painting, * Thesis: While Schapiro’s argument shows a well-considered analysis of the artist’s life as a source of interpretation of Cezanne’s work, much of it is based on suggestion and fantasy. As in all historical interpretation, Cezanne’s work should be viewed within the context of the artist’s historical and biographical framework, but with a formalist analysis of the works that enables the viewer to interpreted not only their personal value, but their intended communication.

Don't use plagiarized sources. Get your custom essay on
“ Cezanne’s Apple Notes and Quotes ”
Get custom paper
NEW! smart matching with writer

riticism of Cezanne’s art cannot and, I believe, should not be limited by critical schools of thought.

Also, though perhaps it has been the nature of critics to make vastly differentiating interpretations of Cezanne’s work, both forms of analysis add to the richness of the dialogue that can expand one’s preconceived notions of the work and widen the scope of understanding and perspective. Contrary to views of critics such as Roger Fry whose formalist analysis deduces Cezanne’s works as only a problem of form and color, Schapiro seeks more symbolist meaning within the subject matter chosen by the artist.

* Schapiro argues that the objects placed within the still-life display “a game of an introverted personality who has found for his art of representation an objective sphere in which he feels self-sufficient, masterful, free from disturbing other spheres. Schapiro believes that fruit is never the theme, rather, they are a symbol of his emotion and personal concerns.

Schapiro makes the case against a purely formal interpretation: “It might be supposed that in still-life painting the meaning of the work is merely the sum of the denotation of the separate parts, yet there may be connotations and a comprehensive quality arising from the combined objects and made more visible and moving through the artistic conception. … (i. e. black clock 1870, still w. compotier 79-82, blue vase 83-85, still w. cupid 95, or pples and oranges 95) There is in still like a unity of things like the unity of a scene of action, one must recognize the context of the objects in reality, their connection with a mood or interest or type of occasion. (24) * Cannot look at these as purely sexual, an element in a painting serves more than one function. Apples could be chosen means of emotional detachment and self-control, the fruit providing an objective field of colors, and sensuous richness lacking in his earlier passionate art and not fully realized in his later nude paintings. Sexual displacement could be an unconscious factor. Certainly, Cezanne has a strange relationship with the human figure in his earlier works. In his early works, sexual gratification is directly displayed or implied. A modern Olympia (1873),

Bacchanal, and his other pictures of the nudes show that he could not convey his feeling for women without anxiety. In his painting of the nude woman, where he does not produce an old work, he is most often constrained or violent. there is no middle ground of simple enjoyment. In Leda and the Swan, the writer argues that it is a striking instance of the defusing of a sexual theme through replacement of a figure by still-life objects. Cezanne’s fruit is not yet fully part of human life. Suspended between nature and use, it exists as if for contemplation alone. (25) In Cezanne’s painting of landscape, too, and sometimes of the human being, we recognize the same distinctive distance from action and desire. He seems to realize a philosopher’s concept of aesthetic perception as a pure will-less knowing. * The still-life objects bring to awareness the complexity of the phenomenal and the subtle interplay of perception and artifice in representation. (19) Still-life engages the painter in a steady looking that discloses new and elusive aspects of the stable object.

At first commonplace, it may becomes in the course of that contemplation a mystery, a source of metaphysical wonder. (20) Still-life calls out a response to an implied human presence. The represented objects, in their relation to us, acquire meanings from the desires they satisfy as well as from their analogies and relations to the human body… They are a symbol or heraldry of a way of life. (23) * Yet, though the nature of the Apples seems to deserve far richer analysis of simple line and form, the use of apples as a restraint of

He could project typical relations of human beings as well as qualities of the larger visible world–solitude, contact, accord, conflict, serenity, abundance and luxury–and even states of elation and enjoyment. * In passing from the painting of fantasies to the discipline of observation, Cezanne made of color–the principle of art allied to sensuality and pathos in romantic painting but underdeveloped in his own early pictures of passion–the beautiful substance of stable, solid object-forms and a deeply coherent structure of the composition.

It is extremely doubtful that he could have reached his goal had he followed Delacroix in his choice of subjects. But in the self-chastening process, the painting of still-life–as latent symbol and intimate tangible reality–was, perhaps more than his other themes, a bridge between his earlier and his later art. (33) 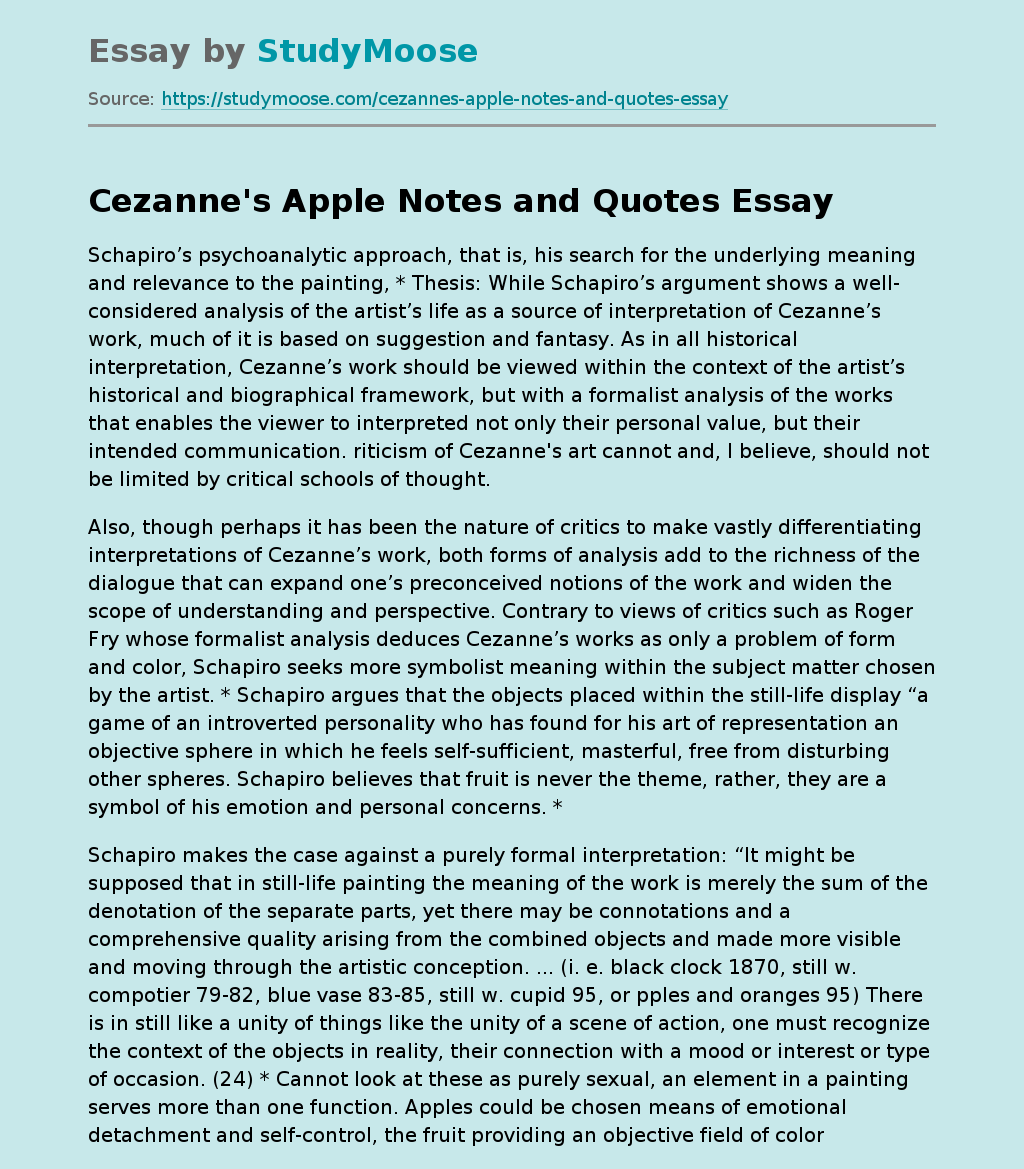