Wireless communication has emerged as one of the fastest diffusing mediums on the planet, fueling an emergent “mobile youth culture that speaks as much with thumbs as it does with tongues. At one of our focus groups a teen boy gushed, “I have unlimited texts . . . which is like the greatest invention of mankind. ” His enthusiasm was hardly unique. Cell phone use and, in particular, the rise of texting has become a central part of teens’ lives. They are using their phones to stay in touch with friends and parents.

Don't use plagiarized sources. Get your custom essay on
“ Cell Phone Addiction ”
Get custom paper
NEW! smart matching with writer

They are using them to micro-coordinate their schedules and face-to-face gatherings. And some are using their phones to go online to browse, to participate in social networks, and check their emails. This is the sunny side of the story. Teens are also using mobile phones to cheat on tests and to skirt rules at school and with their parents.

About six in ten (66%) of all children in our sample had a cell phone before they turned 14. Slightly less than 75% of all high school students had a cell phone. This report particularly highlights the rapid rise of text messaging in recent months.

Some 72% of all US teens are now text message users, up from 51% in 2006. Among them, the typical texter sends and receives 50 texts a day, or 1500 per month. By way of comparison a Korean, Danish or a Norwegian teen might send 15 – 20 a day and receives as many. Changes in subscription packages have encouraged widespread texting among US teens and has made them into world class texters.

As a result, teens in America have integrated texting into their everyday routines. It is a way to keep in touch with peers even while they are engaged in other social activities. Often this is done discreetly and with little fuss. In other cases, it interrupts in-person encounters or can cause dangerous situations. To understand the role that cell phones play in teens’ lives, the Pew Research Center’s Internet & American Life Project and Michigan’s Department of Communication Studies conducted a survey and focus groups in the latter part of 2009.

The first commercially available “mobile radiophone service” that allowed calls from fixed to mobile telephones was offered in St. Louis in 1946. By 1964 there were 1. 5 million mobile phone users in the US. This was a non-cellular system that made relatively inefficient use of the radio bandwidth. In addition, the telephones were large, energy intensive car-mounted devices. According to communications scholar Thomas Farley, the headlights of a car would noticeably dim when the user was transmitting a call.

In the drive to produce a more efficient mobile telephone system, researchers W. Rae Young and Douglas Ring of Bell Labs developed the idea of cellular telephony, in which geographical areas are divided into a mesh of cells, each with its own cell tower. This allowed a far more efficient use of the radio spectrum and the “cell” phones needed less power to send and receive a signal. The first installation was in 1969 on the Amtrak Metroliner that traveled between New York City and Washington. Four years later Martin Cooper of Motorola made the first cellular call from a prototype handheld cell phone.

After the inauguration of mobile phone service in the US, a regulatory environment that allowed multiple mobile-calling standards stifled mobile communication development and expansion in the US for several years. Indeed, the growth of the GSM standard in Europe and the rise of DoCoMo in Japan meant that the dramatic developments in the cell phone industry were taking place abroad. In the US, small license areas for mobile phone companies meant that users were constantly roaming outside their core area.

A user in Denver would have to pay roaming charges if he or she made or received a call in Ft. Collins, Colorado Springs or Vail. To the degree that texting was available, users could only text to users in their home network. In the late 1980’s industry consolidation eliminated the small local areas and by the turn of the millennium, interoperability between operators became standard, and the cost of calling plans and the price of handsets fell. Rather than being a yuppie accessory, the cell phone became widely-used by everyone from the captains of industry and finance to the people who shined their shoes and walked their dogs.

As cell phones have become more available, they are increasingly owned and used by children and teens. Further, as handsets become more loaded with capabilities ranging from video recording and sharing, to music playing and internet access, teens and young adults have an ever-increasing repertoire of use. Indeed, we are moving into an era when mobile devices are not just for talking and texting, but can also access the internet and all it has to offer. This connectivity with others and with content has directed the regulator’s lens onto mobile safety practices.

It has also prompted the beginning of a cultural conversation about how to ensure that parents have the tools to regulate their child’s mobile use, should they choose to. Understanding how youth use mobile phones is vital to creating effective policy based on the reality of how the technology is used. It is also important to understand how telecommunications company policies and pricing affect how teens and parents use their phones. This report tries to expand a tradition of cell phone research that extends into the early 1990s, and work on landline telephony as far back as the 1970s.

The first studies to examine the social consequences of the mobile phone came in the early 1990s when researchers examined its impact on residential markets. One of the earliest papers on cell phones examined it through the lens of gender; in 1993, Lana Rakow and Vija Navarro wrote about the cell phone and what they called “remote mothering. ” Starting in the mid 1990s in Europe there was the beginning of more extended scholarship on cellular communication, and by 2000 work was being done in the US that evolved from a small number of articles to edited books and eventually to both popular and more scholarly books on mobile communication.

Several themes have been central in these analyses. One is the use of cell phones in the “micro-coordination” of daily interaction. As the name implies, this line of research examines how the cell phone allows for a more nuanced form of coordination. Instead of having to agree on a time and place beforehand, individuals can negotiate the location and the timing of meetings as a situation clarifies itself. Micro-coordination can be used to organize get-togethers and it can be used to sort out the logistics of daily life (e. . sending reminders to one another or exchanging information on the fly). Extending this concept further, the cell phone can be used to coordinate so called “flash mobs” as well as different kinds of protests. While micro-coordination describes an instrumental type of interaction, another line of research has examined how the cell phone can be used for expressive interaction. Since the device provides us direct access to one another, it allows us to maintain ongoing interaction with family and friends.

This, in turn provides the basis for the enhancement of social cohesion. In this vein, some researchers have examined how the cell phone affects our sense of safety and security. The cell phone can be used to summon help when accidents have happened and they can be seen as a type of insurance in case something bad occurs. Others have examined how teens, as well as others, see the mobile phone as a form of self-expression. Having a cell phone is a status symbol and having a particularly sought after model can enhance our standing among peers.

Finally, focusing directly on teens, there has been considerable research on the role of the cell phone as part of the emancipation process. Up to this point, however, there has been little quantitative analysis of teens in the US on this topic. Indeed this is one of the main questions considered in this report. Before the cell phone, there were often discussions in the home as to whether a teen could have a landline extension in her room. 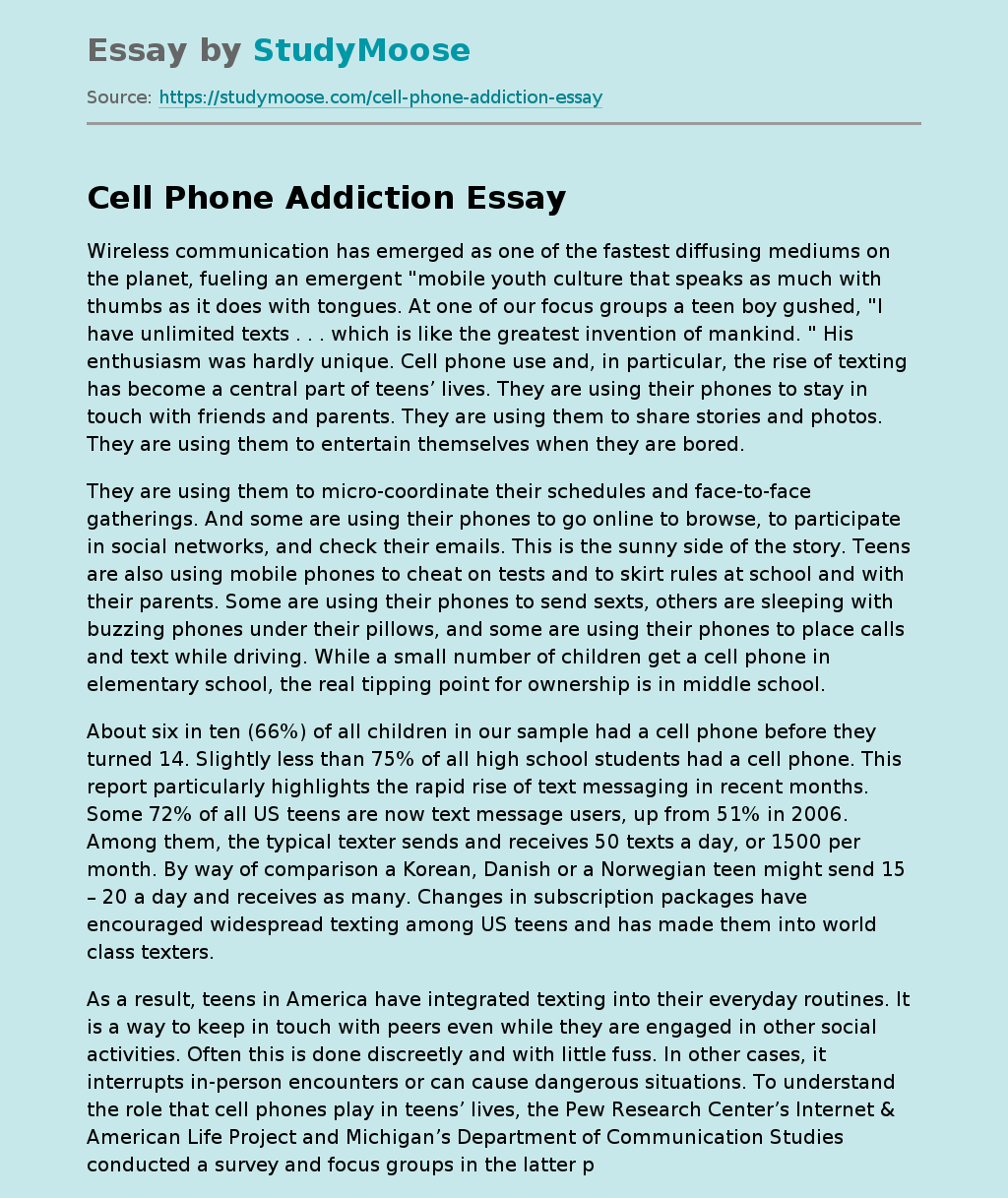