Does Texting Affect Writing? The faith of some people is that using text speak as an abbreviation is hindering the writing possibilities to students, on the other side others believe that texting has a positive influence on writing. Actually, we can support an idea that texting has no significant effect on student writing.

I argue that both authors use elements like providing specific details, researches and personal experiences or thoughts to argue about topic if texting has an influence of writing.

Don't use plagiarized sources. Get your custom essay on
“ The Positive Impact of Texting on Writing in Michaela Cullington’s Does Texting Affect Writing ”
Get custom paper
NEW! smart matching with writer

The Development of social media has modified the approach we communicate with each other. Mobile phones have become a way of life for many people and it may not be the best thing for their literacy, spelling, and communication skills.

Texting and slang have become the most common way to be in touch with our surroundings. Both slang and text speak go into students’ more formal writing. While this communications style has been praised for its educational benefits, some argue that a negative side effect is beginning to take hold in our classrooms.

The essay “Does Texting Affect Writing” by Michaela Cullington, a student at Marywood University, supports that texting has a positive impact on writing. In comparison with the article “Texting slang creeps into student writing” on websites by Annie Martin tends to support idea that writing can be influenced in negative way because of texting, using abbreviations, and using unsuitable expressions.

In comparison Cullington and Martin, the possible fact is that Martin provides more experts statistic and studies which are supporting through her whole article.

However, Cullington uses a lot of interesting facts, statements and researches. Thanks to her own survey and observation we have to conclude that based on this research it is just her own proof, and she has lack of a well-founded evidence. Thus, Martin wins a battle against Cullington.

In the essay “Texting slang creeps into student writing”, (Martin) author’s main point is to show and explain if using new technologies has some effect of writing formal papers. In this essay we will concentrate on more specific details about new type of communication between people especially texting and its influence of formal writing.

Recently, teachers discovered that “writing papers with formal English can seem like a big effort for students who send text messages often.” These students then use their informal expression without noticing while they are writing formal papers. Based on these following studies, teacher’s main goal is to teach students how, when, and in which type of writing they can use informal expressions.

David Finkla, English professor at Southwestern Middle School in DeLand, claims that grammar and proper spelling decreased an accuracy in classes. He said: “One of the biggest problems is the letter ‘u’for the word ‘you,”. (Martin) An author provided this example because he wanted to show how new generation of children are becoming less intelligent than a few decades ago. The cause of this concern is for instance the results of SAT test for college which decreased 9%.

Today’s students are adapted to write faster with using a lot of acronyms, carelessly, and with lower effort of accuracy. About two-thirds of the middle and high school teachers surveyed in the Pew study claimed that digital tools make students more likely to take shortcuts in their writing and almost half of them said these tools make students more likely to “write too fast and be careless.”

Author wants to explain the negative impact of texting and thanks texting is a transfer to the normal life and classes. (Martin). The teachers also met for small focus group sessions, with many reporting “an increasingly ambiguous line between ‘formal’ and `informal’ writing” and the use of informal language and style in formal writing assignments. Local teachers and others say they see this trend, too. Many students don’t see the point of using proper conventions.

A middle school girl refused to capitalize “I” as a personal pronoun, Finkle said, because she thought it was funny. “There’s a certain sloppiness that’s acceptable now,” he said. (Martin). Even high school students struggle with writing like they text. “You have to spell out for students when it’s OK to use casual text speak and when they need to write out words and use complete sentences,” Nahirny said. (Martin).

It’s not just Nahirny’s students. She sees informal language during the summer when she scores essays from teenagers across the country, typically high performing upperclassmen, who take Advanced Placement English Language and Composition exams. Martin shows us some examples as are facts as that text speak leads to lazy writers, students are losing accuracy during the holidays, and many students do not see the point of using proper habitual practice.

Martin also mentioned Tracy Alloway as a contrast with these negatives views of using texting and new technologies. Alloway sees benefit that students sharpen memory and spelling thanks to text speak and technologies. She claims that technology can help expedite research and students can spend more time with writing a paper. One of her former students, Ryan Kirk, says his classmates aren’t confused about when they can use casual language; they’re careless. “Teenagers just love to do as little work as possible for them and text speak does do that for them,” said Ryan, 17. (Martin).

Some high school graduates are carrying these bad habits to college, even in their application essays. Ronda Bostick, an admissions counselor for Bethune-Cookman University, said she’s started seeing text speak or other lackadaisical language in personal statements, which are optional at the college. The prospective students who fall into that trap are “a minority, but it’s enough that’s noticeable,” she said, especially during the past three years. (Martin)

More than 9 in 10 teachers in the Pew study claimed they feel writing effectively is important for success in life, and Nahirny agrees. “Writing is an art but it’s also a necessary skill,” she said. (Martin). It means that to have good skills in writing is something you’re going to have to use in your everyday life. According to the National Association of Colleges and Employers’ Job Outlook 2013 survey, employers are on the same site.

They reported strong communication skills were among their most highly sought-after traits in job candidates. Some people worry that graduates won’t be able to fill this demand. Ryan said, children don’t “get complacent in terms of letting the technology do the work for them“ if Schools will start drilling proper grammar and spelling habits into students at a much younger age. (Martin).

The Matanzas senior, who runs a computer repair service, said he frequently uses text messages to communicate with clients, but always with a professional tone. He’s one of the few in his generation who won’t replace “you” with “u,” he said, even when he’s chatting with friends. That type of language is “just dumbing down the way we talk,” Ryan said. (Martin). It’s why we first learned to speak, so we could communicate better.

We shouldn’t be doing backwards from that. However, Cullington shows more personal results about her own research and the conclusion is that texting has a minimal effect on student writing. Cullington argues against some people who are thinking that texting has a negative influence of writing papers. She provides her own observation and supporting details from her research. She claims that students can recognize the difference between texting and writing formally.

They have knowledge about it what is appropriate in every situation based on using formal or informal language. She has a lot of interesting points in her research based on students’ and teachers’ answers. In her research were involved a lot of young students who corroborate a minimal negative effect of writing because of texting. Cullington also observes what was her behavior, while she was using phone for communication.

The result is a statement that the other way around texting has a lot of positives for writing. For instance, texting is beneficial because it is a way how to be more motivated to write at least something, next positive statement is that people who use texting they are learning a new style of language-new writing skills which leads to increase function of brain.

The brain is more involved and via texting for us it is extra practice for writing formal papers. Most people claim, they are more confident in their writing because they are adapted to use writing skills in daily situations. Thanks to using texting, they can summarize and express oneself concisely. Some teachers noticed that thanks texting, students could have easily their own individual voice.

Cullington infers that our nation has still two sites of judgers who do not agree with each other. Some people claim that texting has no influence of writing, but others especially older generation are against using any kind of new technologies. In conclusion, according to Cullington’s supporting details about texting, we shouldn’t be worried about using new technologies, and skills especially texting.

In conclusion, both authors Martin and Cullington gave us a lot of interesting views, researches and evidence which confront each other. Both authors agree that text messages lack emotions. Based on Martin and her essay, texting is oriented as a harmful influencing factor for writing formal essays. Martin provided us a lot of studies where a lot of educated people were included. On the other hand, Cullington come to the summary and inference that texting and using new technologies could be beneficial or have no influence on writing formal papers.

According of expert research and personal observation, we can claim that texting is not interfering students’ use of standrad written English. Thanks Cullington, I agree with fact that texting has no serious impact for students’ use of standard written English. Texting has no effect on students’ writing abilities in general. About this topic there are a lot of arguments, and a lot of people have different opinions.

Especially older generation like parents, grandparents, and some teachers who claim that texting has negative impact for students’ writing. Other teacher and researchers suggest, texting provides a way how to practice writing in casual life. Because of the lack of scholarly studies on this topic, I will not support any changes to decrease using texting as a communication between my surrounds.

I seem texting and using technologies as a good approach to have more familiarity with variable kind of topics and have more time for studying and gaining new skills and knowledge. This approach could help us to be more creative, and right now it could be the main goal for a lot of young people and new generations to bring something innovative.

The Positive Impact of Texting on Writing in Michaela Cullington's Does Texting Affect Writing. (2021, Oct 06). Retrieved from https://studymoose.com/the-positive-impact-of-texting-on-writing-in-michaela-cullington-s-does-texting-affect-writing-essay 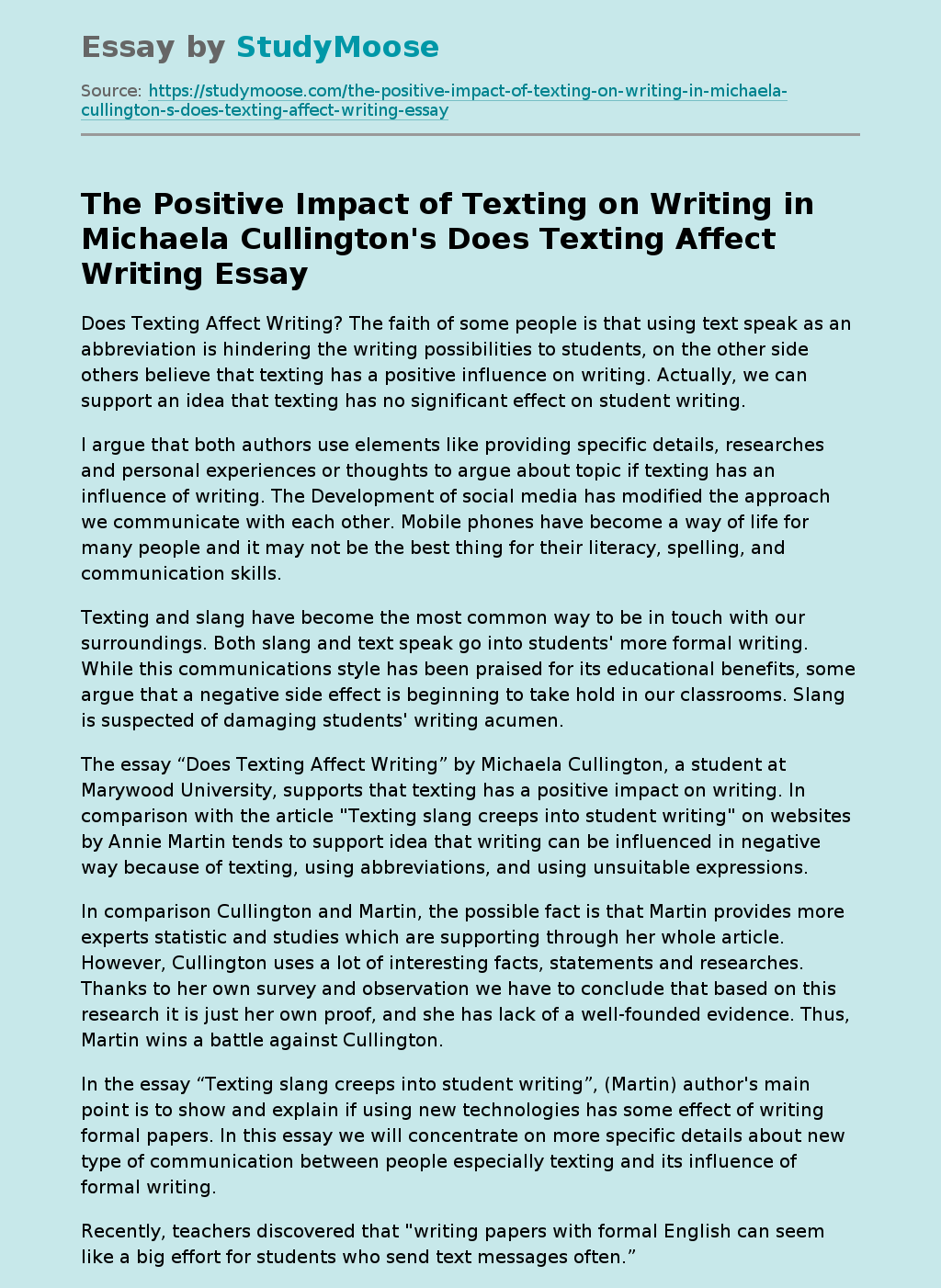