Explain How Groups Can Influence People in Positive and Negative Ways

Being part of a group can give an individual a sense of security, a boost to their self-esteem and a feeling of belonging. They may see themselves as being part of an ‘in-group’. Being part of a group that is seen as being better than others (an ‘in-group’), can create a bond between the members. People of different races or religions, or rival gangs, would be seen as being the ‘out-group’. The sense of security and bonding with the other members can come from having people around you that are working with you, and knowing that you have somebody looking out for you if and when things go wrong.

Don't use plagiarized sources. Get your custom essay on
“ Explain How Groups Can Influence People in Positive and Negative Ways ”
Get custom paper
NEW! smart matching with writer

Having people depending on you in a leadership role can give boost an individual’s self esteem. There are many negatives that can come with being part of a group also. Peer pressure and the feeling of having to conform in ways in which may seem inappropriate, could cause members to go along with decisions and behaviour made, so that they fit in even though they know the outcomes won’t possibly be the best ones.

The pressure to conform in front of other members of a group was apparent in an experiment carried out by Solomon Asch in the 1950s. It showed how members of a group will go along with decisions that others make even though they know that it’s not necessarily the correct choice. A small group were shown a picture of a line and then asked out of three other lines, which one was the same length.

Several members of the group deliberately gave the wrong answer. They had been influenced by the experimenters. The results showed that the level of conformity grew when the answers were said out loud. The level of conformity decreased when the participants were asked to write down their answers in private. The members (not in on the experiment) clearly felt that they needed to conform with the rest of the group, whether it was because they didn’t want to seem stupid or they just felt pressured into agreeing and not being the odd one out.

During the 1950s and 1960s an experiment carried out by Muzafer Sherif et al (1961) took a group of boys from a summer camp and divided them into two groups. The boys interacted well at first, working together and behaving in
ways that would be expected, until they set up a tournament type competition. The behaviour between the groups very quickly turned negative with name calling, hostility and aggression. Within the groups though, the level of solidarity was extremely high between the boys. Once the experimenters intervened and introduced activities that encouraged the groups to work together again, the boys were able to cooperate well and any bad feelings were forgotten. This experiment shows how peer pressure clearly had quite an influence on the boys’ behaviour as the aggression felt towards the other group clearly wasn’t personal as the negative behaviour was quickly forgotten once the experimenters took control. It seems more so that one member, possibly the boy seen as the ‘leader’, made a move, quickly the rest of the group’s behaviour changed one by one escalating to such hostilities. The members of the individual groups would have felt as though they were the ‘in-groups’ and probably felt a sense of security in that they had others working with them and the self esteem of the ‘leader’ would have risen significantly.

Another example of how being part of a group can have it’s negatives and positives is the story of Dorinne Kondo (1990). She was a Japanese American woman who, having lived all her life in America, goes to Japan to study. There, she stays with a Japanese family, the Sakamotos. Kondo finds it hard to conform from the start of her visit and she feels she is being judged for looking Japanese but not acting in the correct manner or being able to properly communicate as she didn’t speak the language. After spending time and helping out with the family she is staying with, Kondo gradually learns the way to do things to suit the Japanese culture. After she gets praise from Mr Sakamoto himself for greeting him with a bow in the traditional manner and when her teacher praises her flawless performance at the tea ceremony, Kondo will no doubt have had a boost to her self esteem and possibly a bonding with the Japanese women. The negatives seem to out-weigh the positives during Kondo’s time in Japan though as she struggled with the fact that women are seen as being below the males and having to bow down (literally) to them. She felt obliged to take on the ‘daughter’ role during her stay and a feeling of peer pressure to perform as a Japanese woman, even though it wasn’t necessarily the way she would act in her life in America.

In conclusion being in a social group (the boys from the Robbers Cave experiment) there seemed to be more positives as the boys felt they had others on their side and lots of back up when things turned bad. Their self esteem would have been pretty high and the bond between them all would of grown as the time went on. Kondos story, which showed more of a cultural group, had more negatives as she really felt the pressure to conform to suit her cultural group and setting.

Explain How Groups Can Influence People in Positive and Negative Ways. (2016, Mar 30). Retrieved from http://studymoose.com/explain-how-groups-can-influence-people-in-positive-and-negative-ways-essay 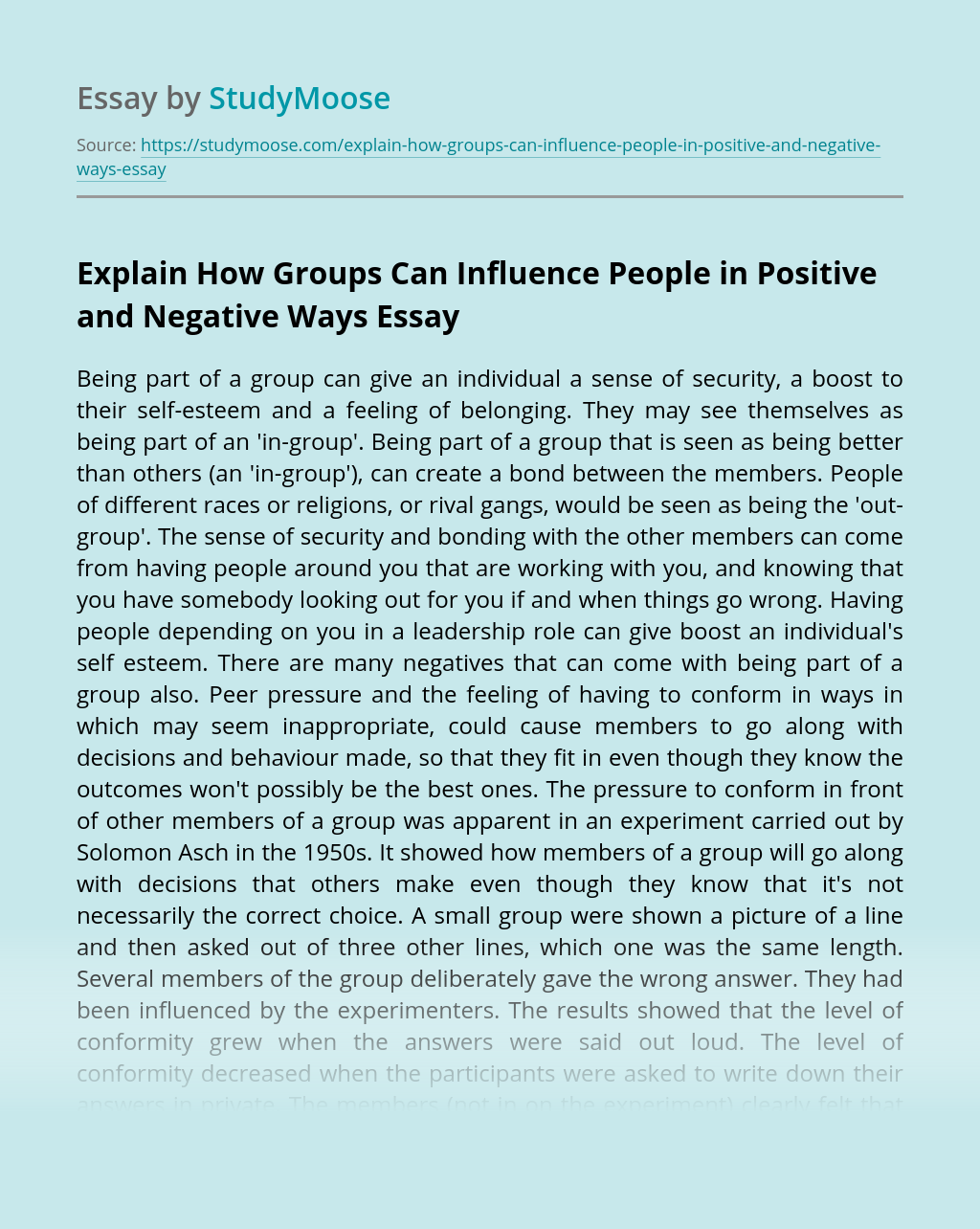