To check Facebook or not to check Facebook, that is the question. The internet and technology has been a topic of hot controversy for quite some time now because of its pros and cons. On one hand, technology and the internet are at the tip of your fingerprints, ready to you at your disposable. On another hand, it summarizes material for you, and creates unnecessary distractions. It has revolutionized the way we read because everything we read now is condensed into 140 characters or less.

Don't use plagiarized sources. Get your custom essay on
“ The Positive and Negative Effects of Technology on Society and the Individual ”
Get custom paper
NEW! smart matching with writer

One can spark note a book, and finish it in 10 minutes, as opposed to reading it. This is explained thoroughly in Carr’s article. In Carr’s “Is Google Making Us Stupid” he speaks about the internet and its massive effects on individuals lives. Specifically, how individuals comprehend when reading and or searching for answers. Next, in Simic’s “A Reunion with Boredom” the author explores and makes arguments about the tremendously devastating effects of our rapidly expanding world of technology like tablets and smartphones, and how dependent society is becoming on them.

Proficient in: How Technology Affects Us

This is creating a more efficient society. Like with anything good there still needs to be discipline. While both Carr and Simic’s article highlight the troublesome nature of the complimentary goods of internet and technology, they fail to highlight the ever increasing positive effects technology and the internet have on the world like access to technology nationwide, and education. In Nicholas Carr’s “Is Google Making Us Stupid” the author makes the argument that technology is having a direct negative effect on the way people comprehend and read material (92).

Carr first makes this clear when he introduced the topic of the internet and states, “I’m not thinking the way I used to think. I can feel it most strongly when I’m reading” (92). Carr is essentially foreshadowing the fact that the reason he isn’t thinking like he used to be because of the rapidly expanded use of the internet.

The role of the internet he argues is bigger than ever. Not only has the internet revolutionized and expanded over time, but individuals are becoming immensely dependent on it. Not only this, but he makes a robust argument that the internet and technology are a massive distraction (95). For example, when doing homework, Snapchat, Instagram etc. are right at your disposable. For me personally, it is extremely hard to work without getting distracted every 10 minutes. Thus, the example presented highlights his argument of the kind of distractions technology create. Ultimately, he highlights the troublesome nature of how technology is ruling the world because it controls society. Most people use technology and allow it to get the best of them. Furthermore, as a society if we do not take notice and try to change some of these habits we will essentially be as Carr states, “artificial intelligence” (101).

Carr sees this as a direct result of how individuals read and think because of the influence of the internet (101). The internet is involved in so many peoples lives that it is so easy to be influenced by. Carr sees this massive access and immense use of the internet as a direct link to “artificial intelligence” (101). In Simics reading, he writes about a similar issue, focusing specifically on the distractions of technology. In “A Reunion with Boredom”, the author Charles Simic examines and argues the disturbing effects of our rapidly expanding world of technology like tablets and smartphones, and how dependent society is becoming on them. He introduces his topic with a rhetorical question: “Do people still suffer from periods of boredom even with computers, smartphones, and tablets to occupy them endlessly?” (374).

The idea behind this sets the message for the rest of his essay. He is seeking to show the extreme separation society has because of technology. His revelation to this came when he had no power after the hurricane Irene (374). This made him find boredom that he hasn’t had in so long thanks to technology. Boredom gave him time to think about himself and reflect. It made him realize that we are “puppets” (374) in a society dependent on technology. Thus, making him realize the devastating effect of technology-dependence. So in a way, the reading is a notice for people to start realizing changes that need to be made in order to not be so heavily dependent on technology. These changes involve time for self exploration, and to really feel bored (374). Bored in the sense of not dependent on technology, and able to focus on one’s self. Reading both of these texts definitely opened my mind because I never truly realized the power of technology.

However, I feel like the authors fail to realize the positive side of technology. The world is going towards a technological revolution. Meaning, everything is switching to technology. The work force, schools and more. The majority of people have access to internet now, and a smartphone. We are in the midst of a robust revolution. Everything is headed towards the direction of online. Even colleges. Everything is at the tip of one’s fingers now through technology: education, news, car rides, banking and more. Everything is all about tablets, laptops, internet. Everything is connected, and in order to strive in todays society, one will need to have access to technology and the internet. Both articles aim to show the negative in the internet and technology. The problem is the way Carr looks at the internet. Yes, it is true that it is affecting the way individuals comprehend material. However, it is giving individuals who have no access to education, access from everywhere. Individual’s from all around the world can access lectures, books, news, and more.

People can learn just about anything online now with an internet connection. Whether you are here in the united states, or all the way in India. The internet is an immensely powerful too that should be utilized by everyone. It gives for the most part free access to education. Not only this, but it gives individuals the chance to interact with people from all over the world, and know what’s going on in different cultures. There are just so many benefits of the internet. Not just education aspect, but the social aspect as well. Being able to connect with loved ones, friends, and more across the world is revolutionary. The problem lies on how people look at it. While is is true that the way we read has changed completely because everything is summarized now, that is not necessarily worse. This is because, as humans we are always evolving. 100 years ago you couldn’t make a phone call to anywhere. Now you can. Individual’s adapt and work with the new technology. For example, nobody sends letters anymore, its just not as efficient as email or text. Likewise, with reading. In the future it going to be less reading and more summarizing. Right now we are nearing that transition. Individuals must adapt. Society is getting more advanced, and that’s a good thing. This means that instead of looking at the change in how we read material, we should learn to adapt. Because doing so, will prepare us when technology is accessible everywhere.

The fact that the internet can help individuals learn quicker, and more efficient than ever is amazing. One does not have to read a thousand-page book anymore. They can spark note it, and pinpoint details. Themes, motifs, summaries and more. Giving individuals the opportunity to learn more and at the same time reduce the time it took to do so. Thus, I disagree with parts of Carr’s article, “Is Google Making Us Stupid” because I do believe the internet is for the better of society. Being able to educate, and know what is going on anywhere in the nation is amazing. For example, being able to wake up check the news from different states, and countries quickly is marvelous. Individuals know what is going on all over the world at the tip of there fingertips, without even needing to be there. Thus, individuals should use the internet to their advantage as it has immense benefits.

While Carr does a good job showing the detrimental effects of the internet, he fails to realize the unique power the internet has, and how it can help individuals everywhere. In regards to Simic’s article, I see the rising problem in the nation. It is very true everyone is becoming dependent on technology. Individuals are in scary relationships with their smartphones, that they fail to have real meaningful conversations and relationships these days. For example, in a classroom full of students, before the class starts, one can bet that the majority of individuals are on their smartphones. Instead of interacting with individuals around them, and building meaningful relationships. Human contact is being completely demolished because of this. Human interactions are fundamental in relationships, and without it, its detrimental. However, just like with anything it is all about discipline.

Someone overweight who continues eating junk food is making a personal decision. Yes, it is hard, but it is all about discipline Technology is evolving in every aspect of society and individuals need to learn discipline. This happens by creating regular routines, and sticking to them. Simic is saying technology is making us dependent on the internet and social media at all times. However, I think the real solution is discipline. This can be done by limiting the hours in a day one is connected to a device. Doing so can make productivity so much more efficient, and create meaningful relationships. Yes, technology is immensely important, but needs to be limited as well. This means being away from one’s phone, Facebook, or whatever is used for a given amount of hours in a day. Thus, these hours can then be used to meditate, work, or just reflect.

The opportunities are endless. Furthermore, whether people like it or not, technology is here to stay, and will continue to advance rapidly. People need to find a way to limit their use and find ways to work around it. Technology is only bad if individuals do not learn how to control themselves. Thus, discipline is key to control ones urges with technology. Still, technology and the internet have immensely positive effects nationwide, and with advancements will continue to do so. Instead of shunning it and seeing technology as the problems, individual’s need to work around it, and use it as their benefit.

The Positive and Negative Effects of Technology on Society and the Individual. (2021, Sep 27). Retrieved from https://studymoose.com/the-positive-and-negative-effects-of-technology-on-society-and-the-individual-essay 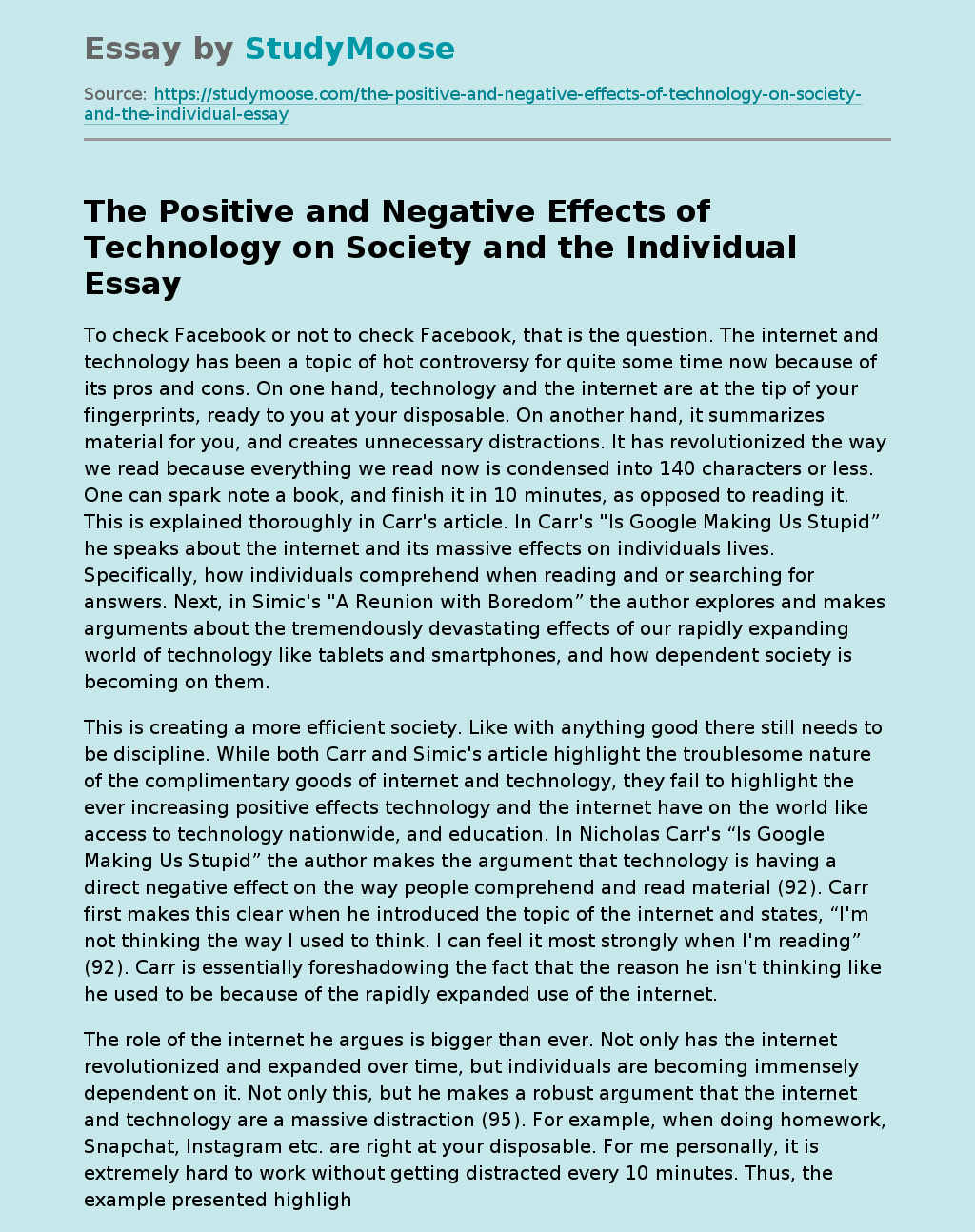