Causes and Effects of the Salem Witch Trials

1692 in Salem, Massachusetts was a time of fear, allegation, and deceit. It was the time of the Salem witch trials. Family feuds, eccentric personalities, and even keeping dolls in your home were reasons for accusations. Fueled by religious fanatics and young girls screaming for attention, literally, no one was safe from the insanity of the witch-hunt.

Don't use plagiarized sources. Get your custom essay on
“ Causes and Effects of the Salem Witch Trials ”
Get custom paper
NEW! smart matching with writer

This paper is intended to discuss the causes of this hysteria, some of the trials that took place during the year 1692, and what finally stopped the madness of the witch-hunt.

The Salem witch trials were fueled by many different things, but the beginning of this hysteria can be traced back to a small group of girls in Salem Village. Betty Parris, a nine-year-old girl with poor health, lived with her father Rev. Samuel Parris, who was the local minister, her mother, an invalid, and her cousin, Abigail Williams. Abigail Williams was a twelve-year-old orphan who worked for her keep; she did most of the chores because of Betty’s illness and cared for her aunt.

When they were finished with their chores, there was not much for the girls to do; Rev. Parris objected to games because he thought that “playing was a sign of idleness, and idleness allowed the Devil to work his mischief.” (http://www.salemwitchtrials.com) Reading books was a popular pastime during the winter. Most popular, were Books about fortune telling and prophecy. These were read, unsurprisingly, mostly by young girls and adolescents. Some of the girls who read these books formed small groups to use the divination techniques that they had read about.

Betty, Abigail, and two other girls formed one of these groups and were assisted by the Parris family’s’ black slave, Tituba. (http://www.salemwitchtrials.com)

Tituba, who was originally from Barbados, was very knowledgeable about the voodoo religion, and often told the girls stories of voodoo, witchcraft, and demons. Other girls began to join the group to listen to Tituba’s stories and tell their fortunes. Betty and Abigail were disquieted by their fortunes and began to act strangely. They were “having fits, making strange noises, and contorting their bodies.” (http://www.paralumun.com) Rev. Parris noticed their odd behavior and asked the help of Dr. William Griggs. Dr. Griggs could find nothing wrong with the girls medically, so he said they were bewitched. The girls were asked to name the witches that had bewitched them and they spoke the names of three women. Tituba, Sarah Osborne, and Sarah Good were all very likely witches. Sarah Osborne had not been to church in over a year, and Sarah Good was homeless and went door to door asking for alms, if turned away empty handed, Sarah Good would mumble words as she left that many thought were curses. The cases of the three women were investigated at the Salem Village Meetinghouse.

During their questioning, Betty, Abigail, and six of their friends often claimed that the women’s spirits were biting them pinching them or appearing as a small animal or bird. Despite the girls, Sarah Good and Sarah Osborne said they were innocent. Tituba, however, confessed to being a witch. Her confession consisted of “red rats, talking cats, and a tall man dressed in black. She stated that the man clothed in black made her sign in a book, and that Sarah Good, Sarah Osborne and others, whose names she could not read, had also signed this book.” (http://www.salemwitchtrials.com) Tituba continued, saying that a black dog had threatened her and made her to hurt the girls. She also said that she had “ridden through the air on a pole to witches meetings with the other two accused.” (http://www.paralumun.com) Then Tituba stated that there were about six other witches and their leader was a tall white-haired man. (http://www.paralumun.com) Tituba’s three-day confession confirmed the villager’s beliefs and initiated the Salem witch trials.

As the trials gained momentum, no one was safe from accusations; the girls accused people regardless of age, health, or public opinion. Everyone was at risk of being accused, from the very young, such as Dorcas Good, a four-year-old boy who was jailed and put in chains; to the old and well liked, like Rebecca Nurse who was a seventy-one year old lady and was considered kind and generous. Abigail Hobbs was already mentally unstable when she was charged with witchcraft. She confessed and gave the names of nine other witches. The judges accepted her confession instead of dismissing her as insane. On April 21, 1692, Nehemiah Abbot, William and Deliverance Hobbs, Sarah and Edward Bishop, Mary Ester, Mary Black, Sarah Wilds, and Mary English were arrested because of Abigail Hobbs’s accusations. (http://www.paralumun.com) Bridget Bishop had been charged with witchcraft twelve years ago; she had been tried but not convicted. When there was work being done on her cellar, “poppets” were found in the walls. Some of them were without heads and they were all stuck with pins. She was tried on June 2, 1692, and hanged June 10, 1692.

Rebecca Nurse was tried on June 29, 1692. The jury found Rebecca Nurse not guilty but when they revealed their verdict in her case, the girls “howled, thrashed about, and rolled around on the floor. With the courtroom in an uproar, the judges asked the jury to reconsider its decision” (http://www.salemwitchtrials.com) Rebecca Nurse was found guilty, and hanged July 19, 1692. Rev. George Burroughs was the former Salem Village minister. He was accused of being the coven leader of all the witches in Massachusetts. (http://www.paralumun.com) The girls also called him the “Black Minister” and agreed that he was the leader of the Salem Coven. He had been widowed three times, and there was a rumor that he had mistreated his wives. When he was angry, he would sometimes brag about his demonic powers. He was tried on August 5, 1692, found guilty, and hanged on August 19, 1692. When he was being hanged, Rev. Burroughs said the Lord’s Prayer perfectly. The Puritans believed that a wizard could not say the Lord’s Prayer without error. (http://www.salemwitchtrials.com)

During the winter of 1692-93, the witch trials began to loose public support. A man named Giles Corey who was accused of witchcraft refused to stand trial and was crushed to death. This, Rev. Burroughs’ prayer, and a letter written by an accused asking “if it be possible, that no more innocent blood be shed, which undoubtedly cannot be avoided in the way and course you go in.” (http://www.salemwitchtrials.com) This and the fact that the Governors wife had been accused of witchcraft caused the Governor to issue orders to protect those accused of witchcraft and ban the arrest of other suspected witches unless it was necessary on October 12, 1692. People began to ignore the cries of witchcraft and the last trial was held in January of 1693. In May of 1693, the governor ended the witch trials for good when he pardoned all of the remaining accused. With nineteen hanged and one crushed, the Salem witch trials finally ended. (http://www.salemwitchtrials.com)

This is how the Salem witch trials began and ended. In my opinion, the Salem witch-hunt was revolting. The destruction of innocent human lives was atrocious. I think that the “witches” were all in the imaginations of a few girls who wanted attention and power.

Causes and Effects of the Salem Witch Trials. (2016, Jun 28). Retrieved from https://studymoose.com/causes-and-effects-of-the-salem-witch-trials-essay 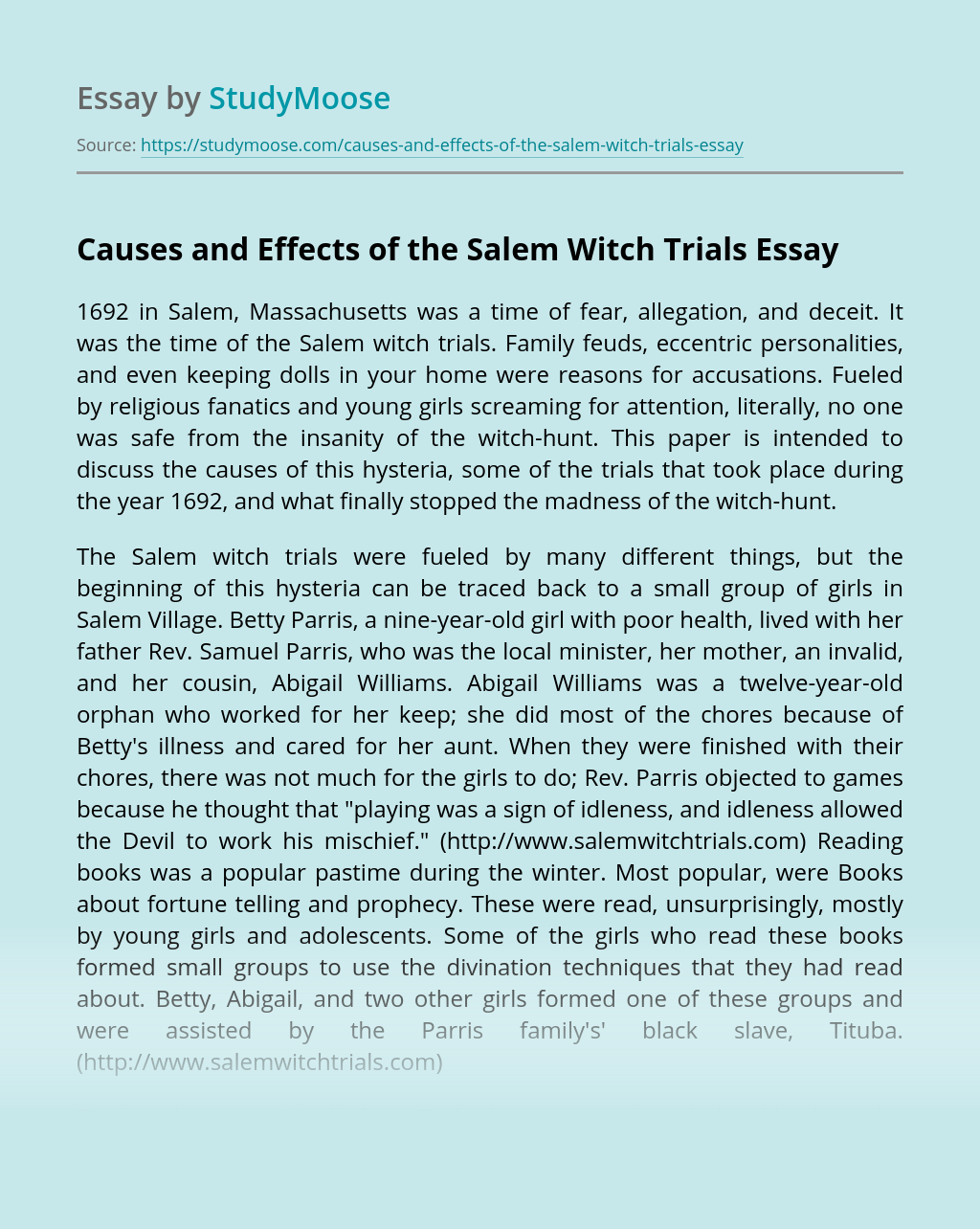