Cause and Effect the Crusades

In the High Middle Ages of the year 1095, Seljuk Turks stormed into Baghdad taking Jerusalem with them. They ravaged the towns and conquered all of Asian Minor from the Byzantine Greeks. Christian lands were burned and pillaged by an accursed race. The Byzantine emperor was in a state of emergency and requested help to fight against these people. The pope responded with a new kind of fighters to defend the lands. He called on the knights of Christendom to form a crusade.

Turn in your highest-quality paper
Get a qualified writer to help you with
“ Cause and Effect the Crusades ”
Get high-quality paper
NEW! AI matching with writer

Their mission was to rescue Jerusalem and the Holy Land from the Muslim Turks. The knights felt intense excitement and joy to fight for their religion. Their morale was high since the pope promised forgiveness for their sins if they died. Rewards and gifts would be given to those that successfully conquered the cities of the Holy Land.

The Crusades won Jerusalem after losing many of their troops through hardships. They sacked Constantinople and savaged a spree of loot.

Temporarily, they strengthened papal influence with successful battles to take back towns. However, later crusades declined the papal prestige since they were not able to detain the Byzantines. The Crusades were never able to successfully accomplish their mission of taking back the Holy Land but brought many long-term effects that would modify the empire.

The crusaders weakened the feudal nobility since they lost many of their lands to go on expeditions. The Byzantine power also decreased with the powerful attacks from the Crusades. Religious intolerance erupted with the Muslims, Jews, and Christians.

These religions used each other as scapegoats and attacked each other with hostility. The Crusades brought an increase in trade to the empire since they purchased new utensils and foods from Arab markets that benefited them. In the long run, Crusades sparked changes that would important to the future of the empire’s economy and people.

Cause and Effect the Crusades. (2017, Feb 11). Retrieved from https://studymoose.com/cause-and-effect-the-crusades-essay 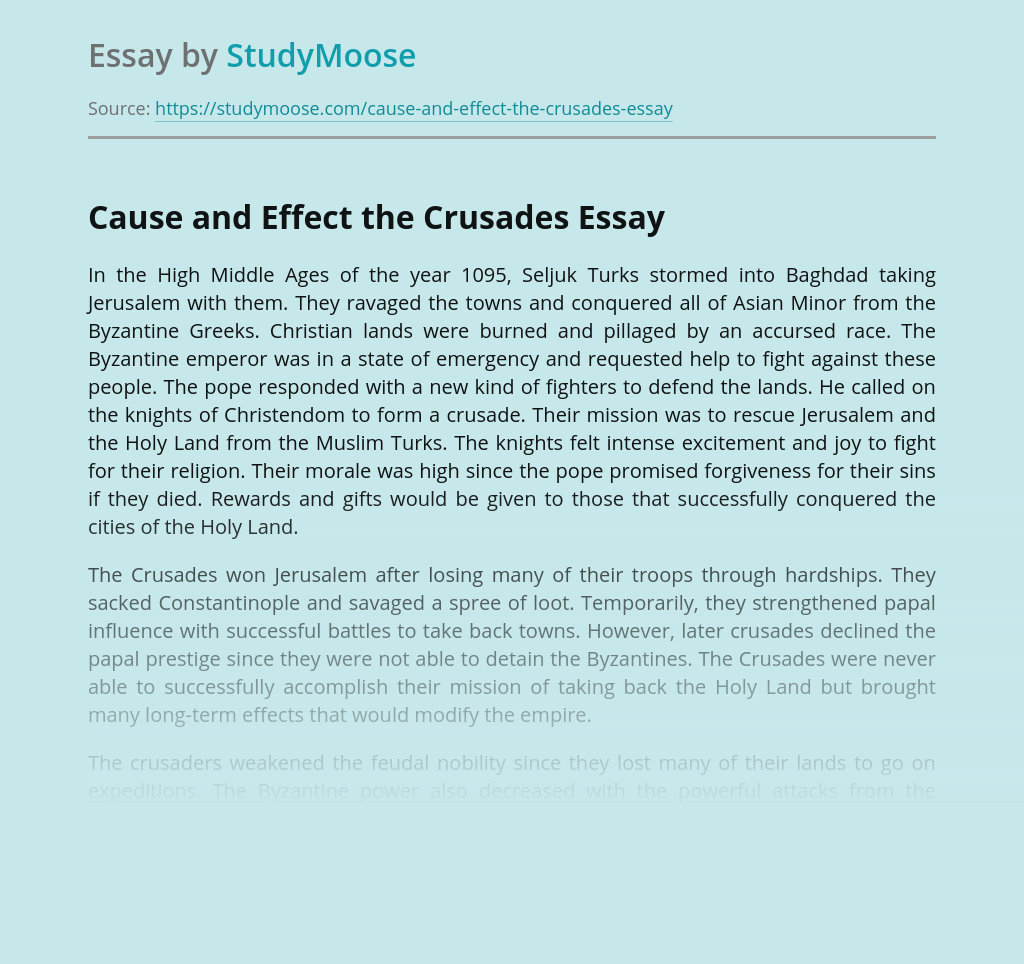 Turn in your highest-quality paper
Get a qualified writer to help you with
“ Cause and Effect the Crusades ”
Get high-quality paper
Helping students since 2015
Stay Safe, Stay Original