Cause and Effect of Movie Crash

Crash, a film directed by Paul Haggis in 2005, is a film that follows characters whose lives intertwine over the course of just a few hours. These characters all have different cultures, ethnicities and backgrounds, but are each in front of the identical issues of racial discrimination and stereotyping because of their differences. Making the impression that “films are primarily concerned with the issues of everyday people” a highly accurate statement in regards to the movie Crash. Thoroughly Crash provides a look into these issues of discrimination and stereotyping and shows how they affect everyone’s lives.

Turn in your highest-quality paper
Get a qualified writer to help you with
“ Cause and Effect of Movie Crash ”
Get high-quality paper
NEW! AI matching with writer

Crash is the perfect resemblance of how we as a human race deal with life, people and our own experiences.

Physical characteristics and racial differences may be interpreted as two distinguishing traits that separate us. I think it’s what keeps us away from each other. It also shows how everyone’s actions can cause a current effect on another person’s life. Together we are all connected to one another by just crossing one another’s paths while been in possession of our lives.

A person’s views and beliefs can have an outcome on how one behaves towards other people. The opening scene is great in presenting the issue of racism right from the start.

There has been a load on a motorway and Detective Ria is soon arguing with an Asian lady. “I ‘Blake’ too fast? I’m sorry, you no see my ‘Blake’ lights”? …Maybe you see over steering wheel, you ‘Blake’ too.

” These harsh words set the film up for a story full of racism and discrimination. Paul Haggis uses this negative mood to prove the anger. What Haggis is showing is that when you’re in your car, you feel safe and oblivious to everything outside of your world because you are secluded in your own little space. It’s only if you crash that you have to deal with the reality of what’s happening outside your own life. This is much the same with racial discrimination. You can live in your own little bubble, but when you find yourself “crashing into” someone else’s life, you’ll be forced to deal with your racial discrimination. John Ryan is one of the characters from the movie Crash.

John role in the movie is a racist cop who always seems to show hate towards anyone he feels is a threat to him, mainly because him being a cop, he has the authority to do so over most people. He basically picks on anyone he feels is an irritation to him. In the movie his circumstances are very interesting, especially the way it effects different situations and other characters from the movie. Officer Ryan in the first scene that he is in, it shows him speaking on a pay phone in a diner. He is arguing about his elderly father medical condition and need for more testing and medications. After a couple minutes of speaking his conversation does not gets nowhere with the person on the phone, he ask them for their name. When she replies that her name was Shaniqua he says “that’s what I thought”. His attempt at trying to use reverse psychology on Shaniqua is very poor to get her to see his dad, it does make sense.

However, she sees right through that and sees that he’s just being a racist prick. Then when he goes to the office in person it is the same women he had spoken with on the phone previously. He started off trying to be polite and civil. Regardless of his current behavior the woman cannot forget his being racist prick. All that officer Ryan cause was for Shaniqua to respond in a negative way. Officer Ryan’s request for further testing and a new Doctor for his sick father were rejected. Officer Ryan doesn’t stop, and then tries to explain why he is a racist to Shaniqua. He tells her of when the city of L.A passed a minority act John Ryan’s father loses his business, because almost all of his employees are working minorities. I think this adds or might even be one of the main reasons that causes John to become a racist individual towards others. Causes him to blame the minorities for the closure of his father’s business, (after all if it wasn’t for them being minorities his father would still have his business) influencing him to mistreat people of other races.

Shaniqua calls the buildings security to remove Officer Ryan from the building. Officer Ryan is out on patrol and pulls over the vehicle of a black couple Cameron and Christine, because the vehicle sort of matched the description of the D.A.’s stolen car. Because of his racist attitudes he proceeds to do an unnecessary body search just because he has the authority and disrespectfully molests Christine in front of her husband, and this act probably makes him feel like he’s getting even, maybe even like he’s getting “revenge” on minorities for ruining his sick dads business. Because it was their ”fault” that the act was passed, but in reality John just seems to need someone to blame and African Americans are the easiest for him to criticize. For the reason that, Officer Ryan’s behavior towards Christine it has cause this couple to fight after getting home.

Christine is angry that Cameron did not stop Officer Ryan from molesting her. This fight would never have happened if not for the why that Officer Ryan had treated them earlier. After that the discord and emotional distress that Christine was under. There is a serious car accident involving Christine upset and hurt and to a complete loss to be driving, which in turn causes the accident. She is badly injured in a car that is turned over, and refuses her only help from whom other then John Ryan. She seems scared and frightened when he approaches the scene and tries to help. I think at this very moment Ryan must have a huge change of heart and redeems himself, because he actually really wants to help Christine instead of hurting her, a minority, someone John Ryan would usually mistreat and maybe even ignore at this point.

The cause of him molesting Christine caused the mistrust between them, but during the life threatening situation they were both in, he probably realize he had been wrong, as he strongly convinces Christine he was not going to hurt her. He even rushed back in to save her after being pulled out without. Christine even with the car being totally in flames right before the car blows up, he was able to get her out on time. This accident and the initial reaction of Christine towards Officer Ryan when he is trying to help her get out of the remains, it is showing himself the reason why he became a cop. That it did not matter what a person’s race was that they were still a person. However, that could possibly be the most important theme of Crash is how these racial stereotypes were able to be shattered. Or on the other side of the coin is how easy it is to fall and jump into judgement someone else by their race or even how they look or talk. In one of the last scenes of the movie Officer Hansen, shoots and kills the African American that was reaching in his pocket for his Saint Christopher statute. To show him that he had the same as the one Officer Hansen had on his dash board.

Officer Hansen, assuming it was a gun the young black man was reaching in his pocket for. He shot the young man and killed him. The young man just happened to be detective Grimm’s younger brother. Officer Hansen must have realized in that moment what his ex-partner officer Ryan had meant when he had spoken to him at the start of the shift. Those words spoken had been the truth more than he wished to have to acknowledge.

Cause and Effect of Movie Crash. (2016, Apr 11). Retrieved from https://studymoose.com/cause-and-effect-of-movie-crash-essay 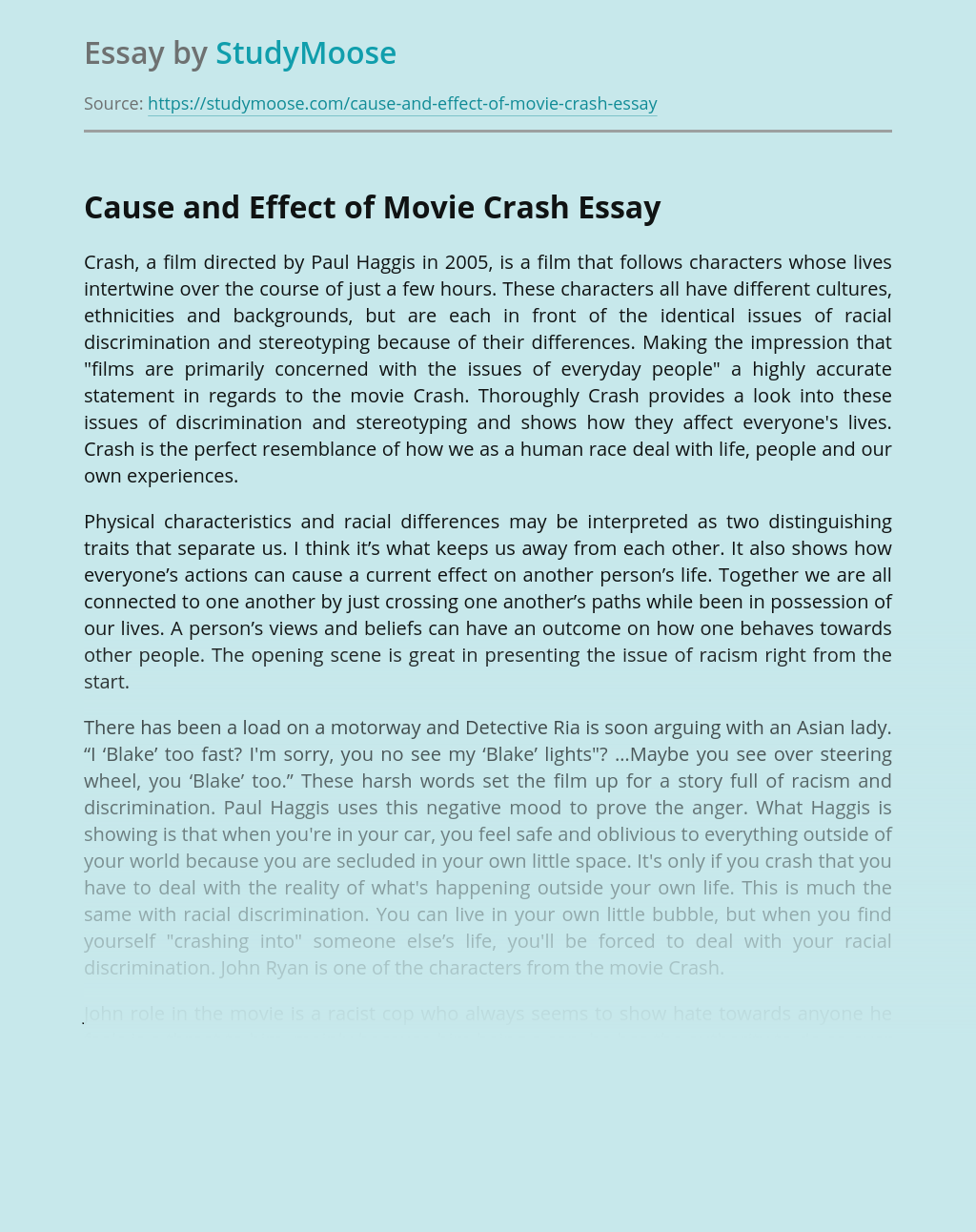 Turn in your highest-quality paper
Get a qualified writer to help you with
“ Cause and Effect of Movie Crash ”
Get high-quality paper
Helping students since 2015
Stay Safe, Stay Original