Catcher in the rye

The novels The Catcher in the Rye by J.D Salinger and Ordinary People by Judith Guest are very comparable in a way; the two novels demonstrate the daily obstacles that teenagers have to overcome. In The Catcher in the Rye it is shown to us that Holden Caulfield is trying to overcome depression and in Ordinary People it is shown to us that Conrad Jarrett gets accepted by his family members and peers again and finds happiness after his depression.

Don't use plagiarized sources. Get your custom essay on
“ Catcher in the rye ”
Get custom paper
NEW! smart matching with writer

The loss of a sibling can have a big impact and similar effects on two different people’s lives, such as Holden Caulfield and Conrad Jarrett. Their thoughts and actions that they make are much influenced by their peers, parents or guardians, and female relationship in their lives.

To begin with, in The Catcher in the Rye, Holden Caulfield does not have good relationship with his peers and instead he mainly criticizes them by thinking everyone around him is “phony”.

For instance, since Holden is a “protector of innocence” he wanted to protect Jane, who is a girl that he once liked from Stradlater trying to do sexual intercourse, resulting into a fight. “… [a]ll I know is I got up from the bed, like I was going down to the can or something, and then I tried to sock him, with all my might” (Salinger 43). This proves that through alienation Holden cannot get his feelings out quick enough which causes action to happen. Not only Holden uses violence to express his emotions but also Conrad Jarrett in the novel Ordinary People does the same.

This can be shown when Conrad decides to attend a school swim-meet after school. As the meet ends, Conrad’s see his friends and as usual, Kevin Stillman begins to give Conrad a tough time, asking him about Jeannine. Conrad loses control and snaps by attacking Stillman “… [t]he sound shattering the parking lot, the red brick wall of building behind him, the white doors, gray cement – all dissolving into broken bits of color, heading swiftly toward him as he slam his fist, hard, against that face” (Guest 143). After this conflict, Conrad realizes that he has always thought the loss of his brother only as it affects him.

Next, this brings us to the theme of isolation in the context of peer relationships. In The Catcher in the Rye, Holden isolates himself from his peers. He relies on his isolation to maintain his detachment from the world and self-protection; he even often sabotages his own attempts to end loneliness. For instance, he calls out Sally Hayes for a date and urges her to run away with him to Massachusetts or Vermont, when Sally rejects him, he displays rude behavior as he states to her “[y]ou give me a royal pain in the ass, if you want to know the truth” (Salinger 133).

On the other hand, Conrad opposes two types of characteristic in line with depression: a lack of feeling and a tendency towards isolation. Accordingly, Conrad creates an imaginary block between him and his peers. When he is alone, he would pull up onto his bed and “blocking out the sharp arrows of sun that pierce through the window” (Guest 10). In this way, he hides his unwanted emotions and feelings from his peers by being isolated. With the isolation between the two characters, they also lead into becoming anti-social with their peers. It is evident in The Catcher in the Rye that Holden does not have a good relationship with his peers. Holden has a strong anger against everyone and that results into having a hard time developing a relationship with peers. “Girls with lousy legs, girls that looked like swell girls, girls that looked like they’d be bitches if you knew them” (Salinger 123). This proves that Holden believes everyone surrounded by him are phonies because he cannot accept the fact that society changes.

Likewise, Conrad becomes anti-social by spending more time in the library than with his friends and consequently he starts to lose his best friend Joe Lazenby. At one point in the novel, Joe Lazenby has a talk with Conrad, which ends up in an argument. Conrad then begins to feel hollow in the pit of his stomach, as if he was being punched and he thought to himself, “never mind him, screw him screw them they were all Buck’s friends anyway” (Guest 83). This suggests that Conrad is becoming more isolated and antisocial due to the loss of his brother Buck.

Secondly, in addition to peer influence, Holden and Conrad are deeply affected by their relationships with their parents and guardians. To start off, Holden in the Catcher in the Rye is afraid to be seen by his parents from being kicked out of school. “I began to relax, sort of. I mean I finally quit worrying about whether they’d catch me home or not. I figured the hell with it. If they did, they did” (Salinger 163). It is apparent that the he does not want to be seen because his parents will just see him as a screw up, since his other brother D.B is more successful.

This is similar to Conrad’s relationship with his parents in Ordinary People. Conrad feels that
he is a disappointment to his parents, since his older brother has an image of being superior. To illustrate, “… [b]ut it had been Conrad, shaken and scared who answered him, not Buck. Buck had never worried about anything” (Guest 117). Conrad is being compared to Buck, proving his weakness. Conrad is projecting a self-image of himself through his parents and which he is suggesting that he is “the problem”. As these two characters become more distant from their parents, they start receive less attention from them.

In the case of Holden in the Catcher in the Rye, his parents just move him to another school instead of admitting that there may be something wrong with him. For example, “ … they’ll be pretty irritated about it, they really will. This is about the fourth school I’ve gone to” (Salinger 9). This indicates that Holden does not understand his parents and they do not understand him. In the same way, Conrad mostly has a hard time communicating with his mother and starts to feel isolated from her. For instance, it took Conrad one month to admit to his parents he had quit the swim team, as he was afraid of their disproval. When his parents found out, his mother becomes infuriated with him. Conrad replies and says, “I’m sure I would have told you. If you gave a damn!” (Guest 109). It is clear that the loss of Buck may have an impact on the poor communication between Conrad and his mother. It appears as though Conrad is still living in the past while his mother is trying to move on.

Although the two characters have difficult relationships with their parents, they still have their guardians. To exemplify, Holden and his former school teacher Mr. Antolini have been friends for a long time, and the two are obviously close. It is evident Mr. Antolini cares a lot about his Holden, as he encourages him to take education more seriously and focus more on meaningful activities “I laid awake for just a couple of seconds thinking about all that stuff Mr. Antolini’d told me. About finding out the size of your mind and all. He was really a pretty smart guy” (Salinger 191).

This demonstrates Mr. Antolini concerns about Holden. Similarly, Conrad is able to gain support from Dr. Berger, his psychiatrist. Conrad shows his close relationship with Dr. Berger by seeking lots of advice about his problems. For instance, Conrad was able to seek help from Dr. Berger when he was going through an emotional breakdown with his brother’s loss. Dr. Berger was able to provide comfort as he stated, “[i]t is a very far-out act of self-preservation, do you get that Con? And you were right. Nobody needs you to be Buck. It’s okay to be just you” (Guest 177). Dr. Berger ends up showing Conrad that healing from depression involves feeling anything, even anger.

Lastly, Holden and Conrad each have important female figures in their lives. One of the important females to Holden would be his little ten-year-old sister, Phoebe. Phoebe helped Holden discover his problems and is the only one he trusts in his life. “Then I took my hunting hat out of my coat pocket and gave it to her. She likes those kind of crazy hats. She didn’t want to take it, but I made her” (Salinger 180). This demonstrates how much Holden trusts Phoebe because the red hunting hat was important to him during his journey.

On the other hand, Conrad meets a girlfriend, Jeannine. Jeannine provides a rebuilding stage into Conrad’s life. While Jeannine is helping to rebuild Conrad’s life, Phoebe is helping Holden to resolve his problems. Although Phoebe is still young, she can tell that he needed her. For instance, Holden could not hold back and started to cry, “I couldn’t help it. I did it so nobody could hear me, but I did it … she came over and tried to make me stop, but once you get started, you can’t just stop on a goddam dime” (Salinger 179). Jeannine gives Conrad the confidence required to challenge many problems. For example, “… I said a stupid thing that day. I didn’t know about your brother, then. I’m sorry … [t]here are worse things.

People do worst things than that” (Guest 123). She lets him solves his own problems and does not get involved where she is not needed. Moreover, the girls have one similar effect on the boys; Phoebe and Jeannine makes them feel needed. To emphasize, Phoebe refuses Holden to leave for the West just to show how much she needs him. When Phoebe meets Holden, she states, “I’m going with you. Can I? Okay?” (Salinger 206). Also, when Jeannine was upset and started to cry over her mother’s new relationship with a man, Conrad was there to support her. Conrad mentioned that “[h]e feels as if he could stand here holding her forever … he has never felt so strong, so needed” (Guest 159). This proves that without these females in both of Holden and Conrad’s lives, regaining and solving their problems would have been challenging.

In conclusion, the lost connection in both of their lives was right in front of them the entire time. Both Holden and Conrad solved their problems with the love and forgiveness. Without their brothers that they have lost, parents and guardians, and female friends, the two main characters would not have been able to change into a better people In the end, the lesson that the two novels have taught us is that no matter what situation you are in, you will always be able to find your self and have support from many loved ones.

Catcher in the rye. (2016, Apr 22). Retrieved from https://studymoose.com/catcher-in-the-rye-essay 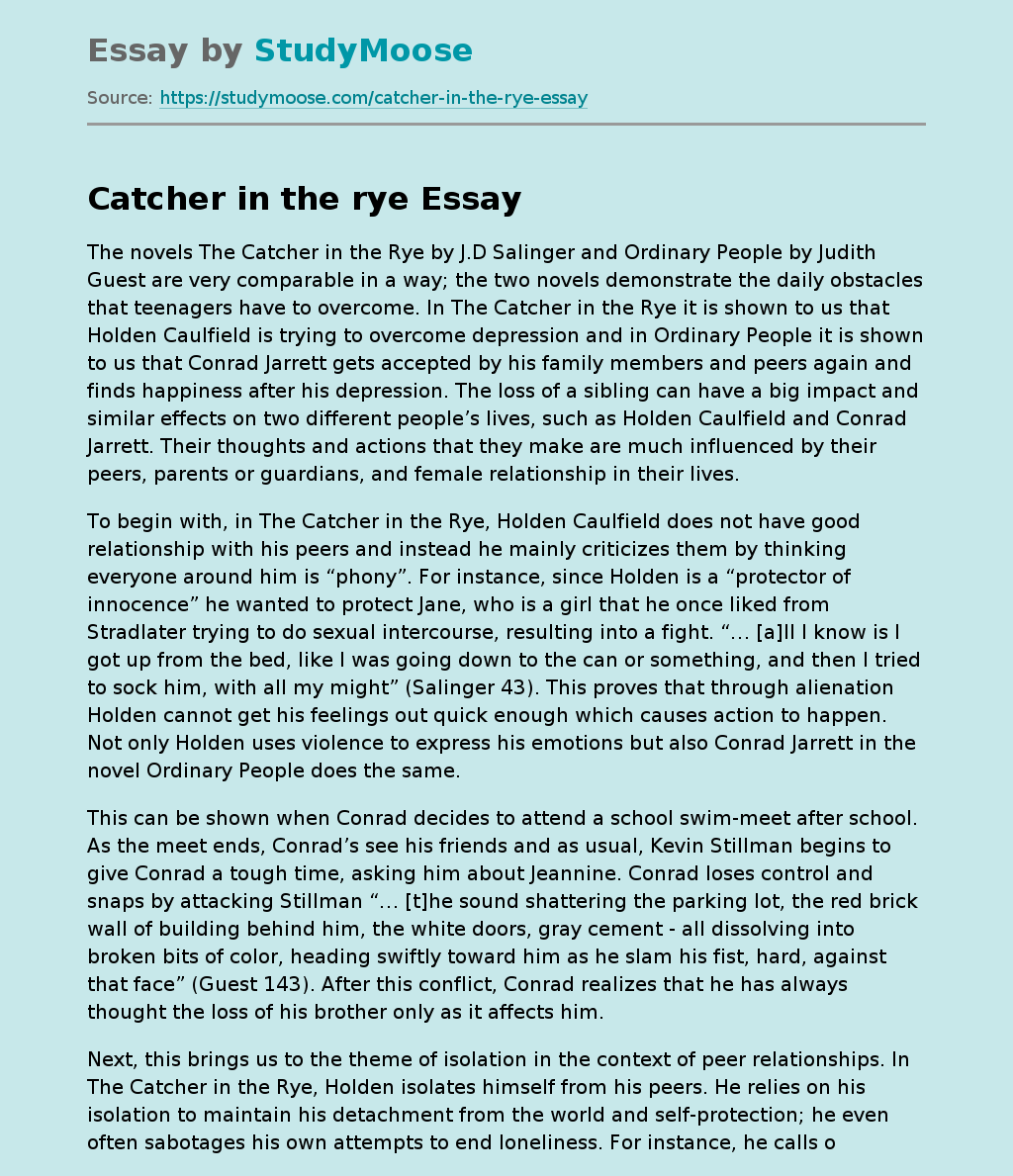