Financial Analysis covers a very broad scope and while one aspect looks at the general (qualitative) factors of a company, the other considers the tangible and measurable factors (quantitative) This means that there is need to analyse the numbers from the financial statements. Ratio analysis is not about comparing different numbers from the balance sheet, profit and Loss account and cash flow statement but rather comparing numbers against previous years.

Don't use plagiarized sources. Get your custom essay on
“ Case study of British American Tobacco ”
Get custom paper
NEW! smart matching with writer

An analysis of the financial statements of the British American Tobacco will assist in establishing the success, failure and progress of the establishment.

Trend Analysis : Trend analysis is useful in the analysis of company accounts over a series of years. The analysis is applied to a five -year or ten – year summaries supplied in company accounts. The technique gives a quick rough guide to specific trends in the individual items in the financial statements.

The review of longer term historic trends identifies among others; ‘ an uneven past trading record implying competitive vulnerability; the impact of exceptional (or extraordinary) items – these are often due to major strategic errors of judgement or implementation in the past; and longer term trends in margins or operating (and costs) – illustrating shifts in both competitive and financial positions’ (Ambrosini with Johnson and Scholes p.

There was a percentage increase of 45.9% in 2001, which dropped significantly in 2003 to -82.5% and raised again 2004. This can be attributed to the loss upon disposal of subsidiaries such as Flintkote, which transferred all of its rights, title and interest and 100% of issued and outstanding shares. British American Tobacco discontinued involvement and ceased to consolidate Flintkote effective 2003. This led to a loss in disposal of up to 62 million before tax. The drop in profit between 2002 and 2003 can be attributed to the litigation cases that are faced by the group such as the medical reimbursement cases where civil action seeks to recover the expenses incurred by the government o health care and welfare costs resulting from illnesses associated with smoking.

The percentage increase in 2004 is attributed to the sale of Etinera S.P.A and distribution business of ETI for ï¿½590 million and the profit on this was 20 Million. In October 2004, the sale of the 20% group stake in Lakston company in Pakistan, resulted in a profit of ï¿½27 million and on 13th December 2004, the group sold its 3% share Bollore investment in France for a profit of 11 million.

Vertical Analysis: Vertical analysis concentrates on a year’s financial records as opposed to comparing a number of years. Such common size statements express all items in each financial statement as a percentage of a selected figure. Items in the Profit and Loss account are expressed in terms of the turnover and in the balance sheet, in terms of the capital employed. 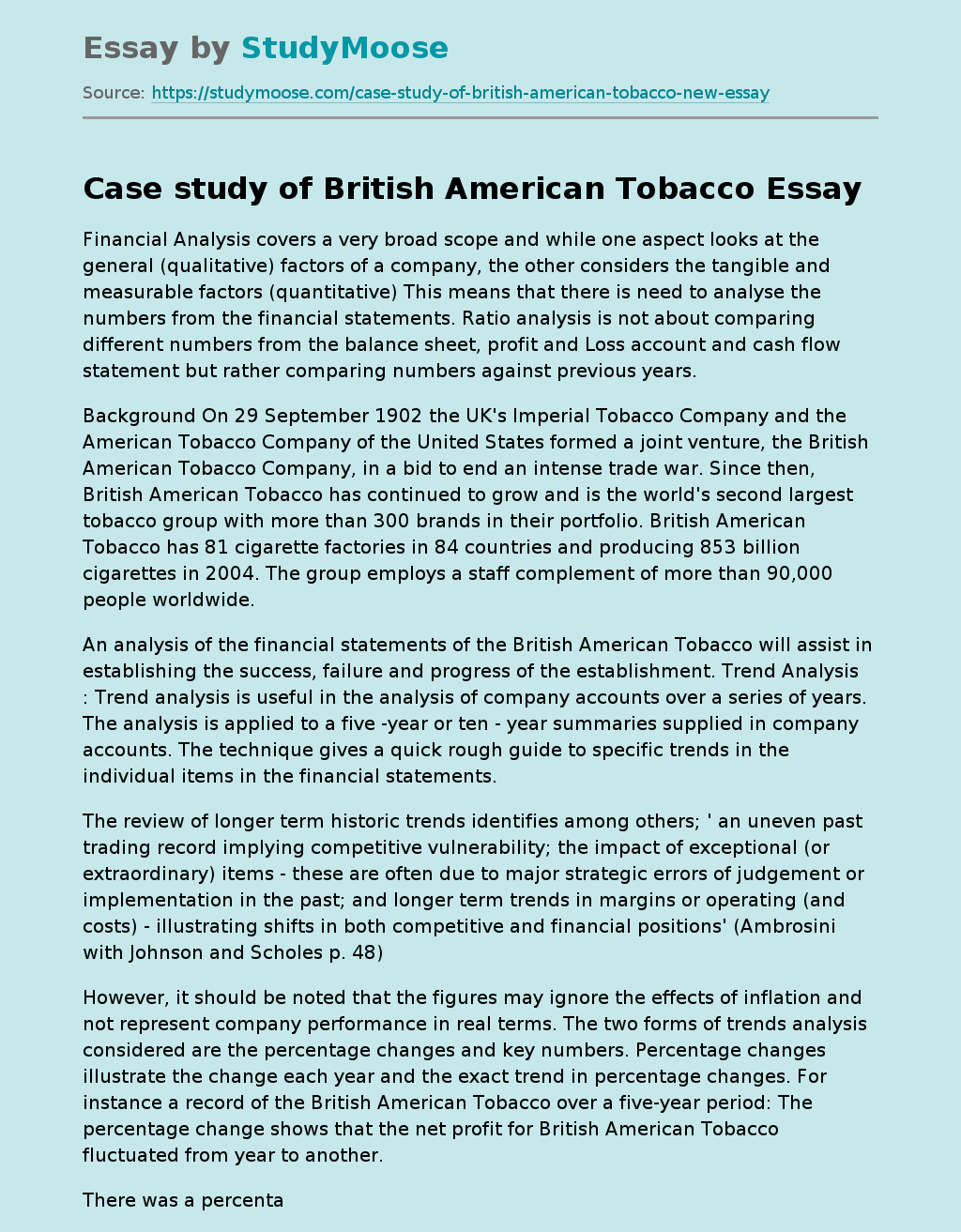