Should Alcohol and Tobacco Advertisement Be Banned

We may see alcohol and tobacco advertisements everywhere, on television, in newspaper, on street ads card etc. Alcohol ads usually create several feints to tell people that alcohol is good for people and induce people to drink. On the other hand, the malign influence of advertisements shows smoking as something “cool”. But we know the truth is not so. Alcohol is harmful for people’s health and sometimes it may bring bad effects to self-impression. And cigarette smoke contains over 4,000 chemicals, including 43 known cancer-causing (carcinogenic) compounds and 400 other toxins.

Don't use plagiarized sources. Get your custom essay on
“ Should Alcohol and Tobacco Advertisement Be Banned ”
Get custom paper
NEW! smart matching with writer

These include nicotine, tar, and carbon monoxide, as well as formaldehyde, ammonia, hydrogen cyanide, arsenic, and DDT. So I think alcohol and tobacco advertisement should be banned. The first illusion alcohol ads create is that alcohol promotes good health. One of the ads say that drink a little every day, you will improve your health. But what the truth? Doctors say that alcohol consumption, even in small amounts, dulls the brain. Long term drinking may result in malnutrition and serious diseases such as heart disease, stomach ulcer, hepatocirrhosis.

Among young male people, there are lots of fat liver patients, most of whom are long term drinkers, perhaps one of your brothers is among them, we all have the experiences of trying our best to persuade them to give up drinking, but they refuse to admit their disease is related to alcohol for the ads don’t tell the harm. Another fatal harm of alcohol is drinking and driving.

We have seen too many traffic accidents and shocked by the misery, a considerable part is caused by drinking and driving.

The second illusion alcohol ads make is that alcohol makes you popular and successful. Many successful people become mouthpieces for some alcohol. People like to drink the alcohol due to the famous person’s charm. They want to be a successful person like the famous man . But things do not go along with their expectation. The more they drink, the worse things are. Sometimes they are late for an important date for over alcohol drinking, sometimes they give bad impression to copartner for full of alcohol smell and hence lose the chance.

Advertising for tobacco is another source that cause teenagers smoke and adults smoke. Recently, tobacco companies have found new ways to promote their products to youth. They support their sporting events, concerts and movie. Many people favor idols or stars smoke in the movies and they seems very cool. And Teenagers are curious about imitation. Smoke containing nicotine acts as a stimulant to the brain. Nicotine in the bloodstream acts to make the smoker feel calm. In fact, nicotine is a lethal poison, affecting the heart, blood vessels, and hormones.

Tobacco smoke contains over 4,000 chemical compounds. More than 60 of these are known or suspected to cause cancer. What is more, secondhand smoke can be harmful in many ways and it ruins thousands of non-smoking people, children’s health. The US Surgeon General and the US Food and Drug Administration are among those who have examined the evidence and concluded that tobacco advertising does increase overall consumption. If we ban adverts on tobacco products, they will gradually lose their appeal, because they won’t symbolize anything “cool”, “smart” or “amazing”.

Tobacco products will become ordinary consumption goods and thus the number of young people who take up smoking in order to “be somebody” will decrease. All of these points to the conclusion that alcohol and tobacco manufactures advocate the so-called benefits of alcohol and tobacco just for their vested interest. Even thought alcohol has a little good aspect for our health, such as used for medicine care. On the contrary, it always brings trouble and damages our health. So, I think alcohol ads should be banned as well as tobacco ads.

Should Alcohol and Tobacco Advertisement Be Banned. (2016, Oct 28). Retrieved from https://studymoose.com/should-alcohol-and-tobacco-advertisement-be-banned-essay 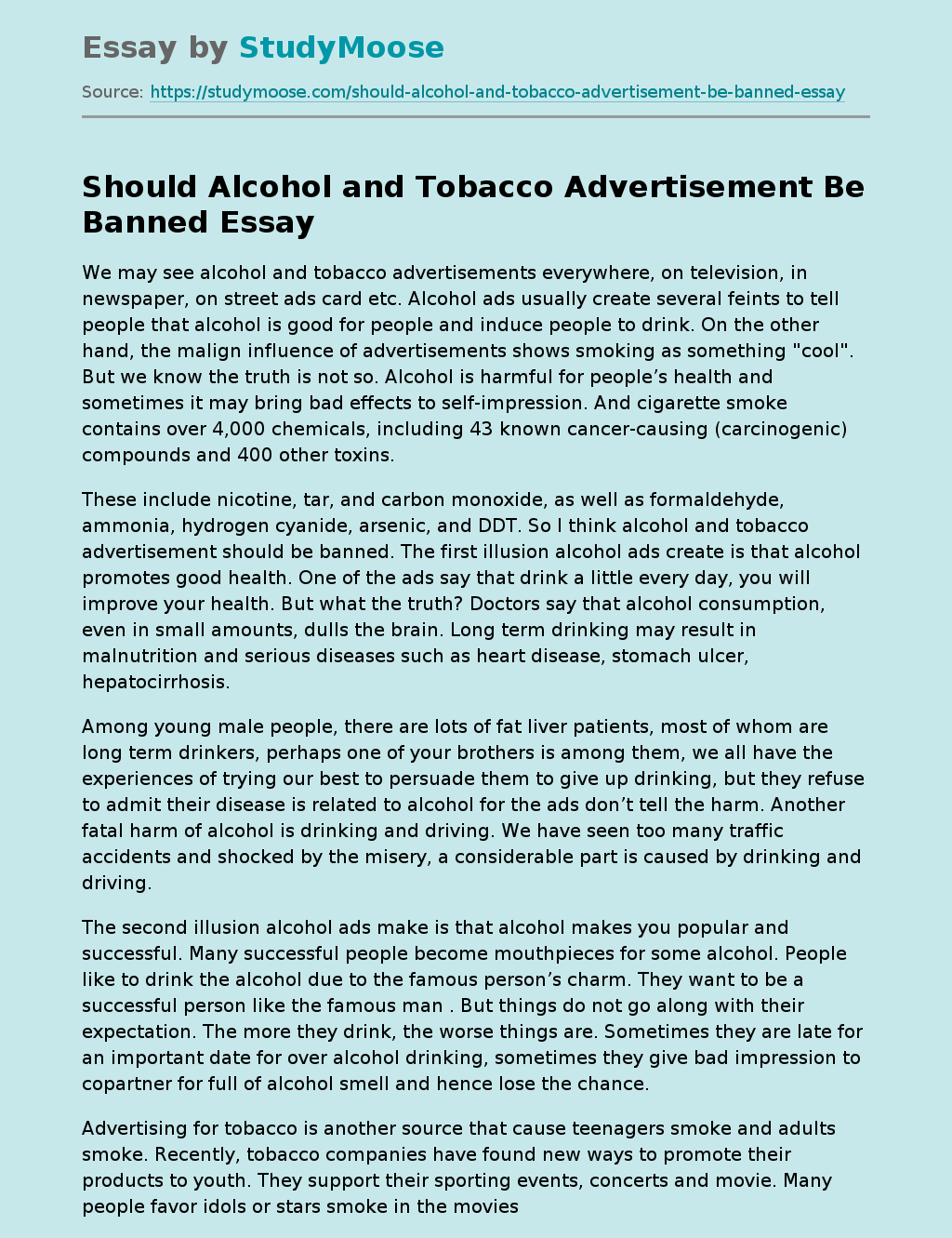