﻿Alcohol advertisements should be banned Essay

Alcohol is the ingredient found in beer, wine and spirits which causes drunkenness. Abuse of alcohol, or consumption of more alcohol than the body can handle, can lead to liver damage and other debilitating conditions. Alcohol abuse can also lead to alcoholism, or alcohol addiction, in which a person becomes physically and psychologically dependent on alcohol to the point that he or she cannot function without it. Alcohol advertisements can be seen virtually anywhere; they are especially known for sponsoring sporting events, concerts, magazines, and they are found anywhere on the internet.

Don't use plagiarized sources.
Get Your Custom Essay on ﻿Alcohol advertisements should be banned Just from $13,9/Page

Excessive alcohol consumption is unquestionably bad for one’s health. Numerous researchers indicate that alcohol consumption on a regular basis destroys the liver and oesophagus. Thus alcohol advertisement in the print media and cinemas which encourages one to consume alcoholic drinks should be banned. In addition, alcohol advertisements are proven to have a huge influence upon teenagers.

These advertisements are played a lot during TV shows watched by youngsters such as football or the ashes today.

Television, cinemas and billboards are needed to stem the tide of binge drinking among teens to reduce the amount of teens affected by the deadly outcomes of alcohol. The number of alcoholics in this country has seen an exponential increase. More and more working women too are getting hooked on drinking. Instead of relegating drinking alcohol to social occasions, there’s an increasing number of both men and women drinking alcohol excessively and regularly. Alcoholic drinks give a false sense of confidence and boldness. It is quite common to see those who had too much to drink behaving inappropriately as the alcohol makes one lose their inhibition. The media should be more meticulous in terms of its advertising content.

You may also be interested in the following: alcohol should be banned essay

﻿Alcohol advertisements should be banned. (2016, Mar 22). Retrieved from https://studymoose.com/alcohol-advertisements-should-be-banned-essay 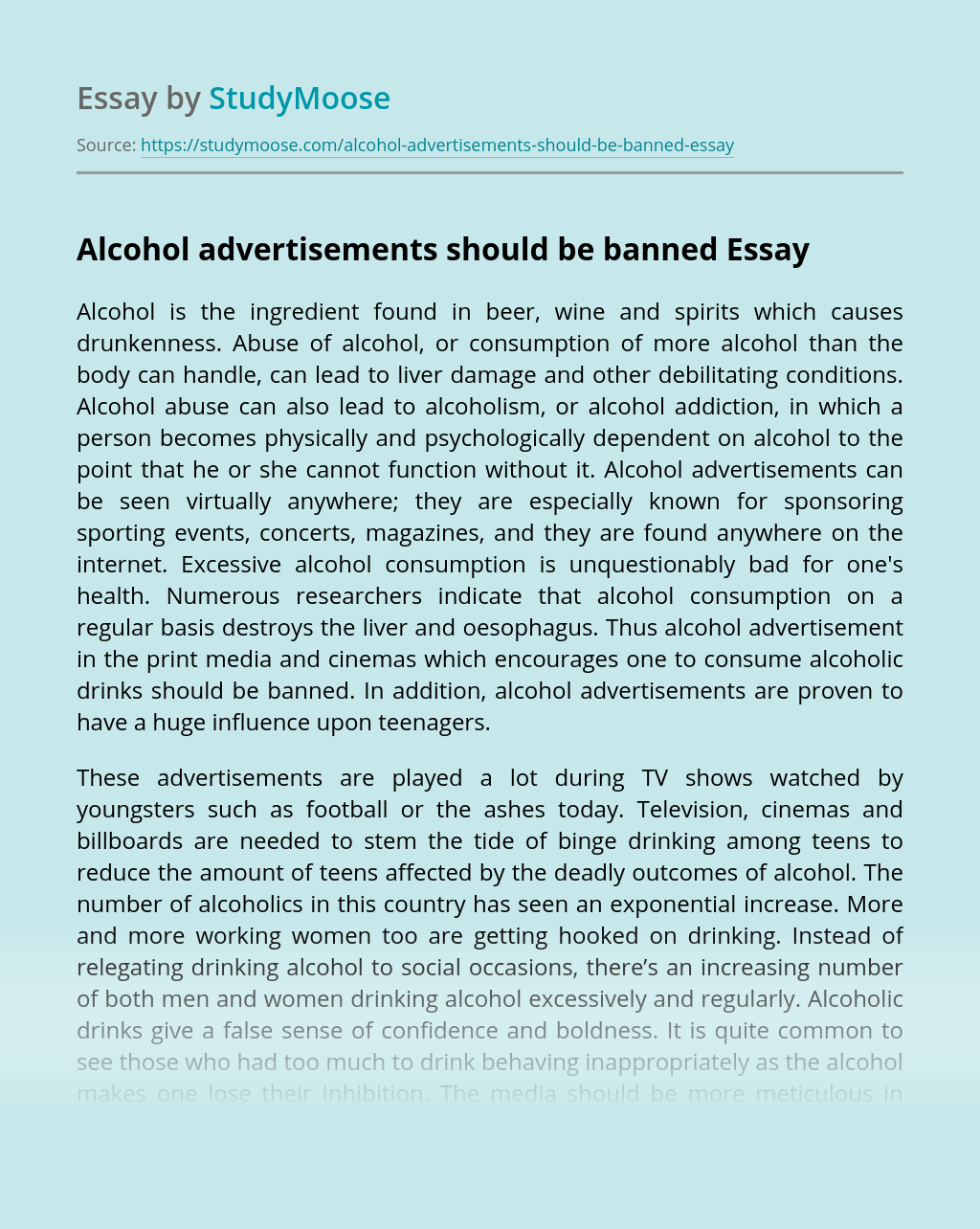 On a hot summer day the best place to be is the Beach. Have you ever been so hot you could melt, and just want to play in the cold, salty ocean? I have! The best felling is the wet, grainy, sand between your toes. When you go to the beach all you see is... VIEW ESSAY

Introduction Since 2006, Burberry has become the top luxury brands as the internationally recognized, and the networks of products selling are around the world. Recently, because of the high cost of producing in Welsh factory, Burberry decided to close it and move to China. In UK it almost takes 12 Pounds to make one of... VIEW ESSAY

One dreams, through the use of imagination, of what will become of them as life progresses. In some cases that person lives passionately with desires of self fulfillment, eventually reaching their goals in an ever so content way. At other times one remains lost, underappreciated, and ultimately carries with them a perilous, loathing attitude. Willy... VIEW ESSAY

View sample
Smoking Should be Banned in all Public Places

The numbers of people who smoke have increase over the years. Although they are equipped with the knowledge of how unhealthy smoking can be, people still choose to smoke. It is a personal choice and a highly addictive habit. Smokers choose to subject themselves to the health risks of smoking. It is not for the... VIEW ESSAY

I”The Importance of the Act of Reading” by Paulo Freire, describes the importance of the act of reading beyond numerous experiences in his life as a child, a teenager, and an adult. Freire begins his article by taking readers back to where he was born, in his home city Recife, Brazil. He uses very itemized... VIEW ESSAY