Bob Knowlton was recently assigned to be a project head of the new photon unit at Simmons Laboratories. He received the assignment from Dr. Jerrold, the head of the laboratory. Unbeknownst to Knowlton, Jerrold had decided to bring in another person to the project, Simon Fester. Although Fester is obviously a brilliant individual, he lacks any sort of teamwork skills and derisively says the decisions made by groups exhibit a “high level of mediocrity”. This disturbs Knowlton because he feels that group participation in the meetings with all departments yields great decisions and builds camaraderie.

At a meeting between the sponsors of the research and the project heads, Fester controls the presentation and the coinciding after-meeting. Knowlton feels that Fester has taken control of his project and has started to look for positions at other companies. He tenders his resignation a few weeks later, surprising both Jerrold and Fester. Unfortunately Jerrold did not anticipate and had made plans to move Fester to another project, assuming Knowlton would continue to head up the project.

Now the once promising project is in shambles with no leadership.

Although the relationship between Jerrold and Knowlton seemed strong and they talked frequently, there was still an obvious communication disconnect between regarding Fester. Knowlton does not clearly state to Jerrold what his misgivings about Fester are. In addition, Knowlton appears not to have confidence in his abilities and basically allows Fester to run the show.

Knowlton believes that he “happened” into his new position and feels that he had some lucky breaks in obtaining it.

Locus of control is used to explain whether or not individuals think their outcomes are controlled internally or externally (Luthan, 2011) . Knowlton is exhibiting an external locus of control since he credits his ascension to his current position as a “miracle”. This coupled with the fact that he is threatened by Fester looking at his graphs, running his meetings, etc., shows that Knowlton does not think his ability (internal locus of control) had anything to do with his promotion.

Jerrold should make an attempt to rehire Bob back into the company. He obviously faith in his abilities and needs Knowlton’s experience to run the photon project. Jerrold also needs to work with his subordinates – including Fester – on interactive communicating and teambuilding.

If Jerrold is unable to convince Knowlton to return to the company, he may have to pull back Fester from his new project to run the photon project or let the latter stagnate. However, unless Fester can learn to include team members in making decisions, the project will fail due to a lack of teamwork. 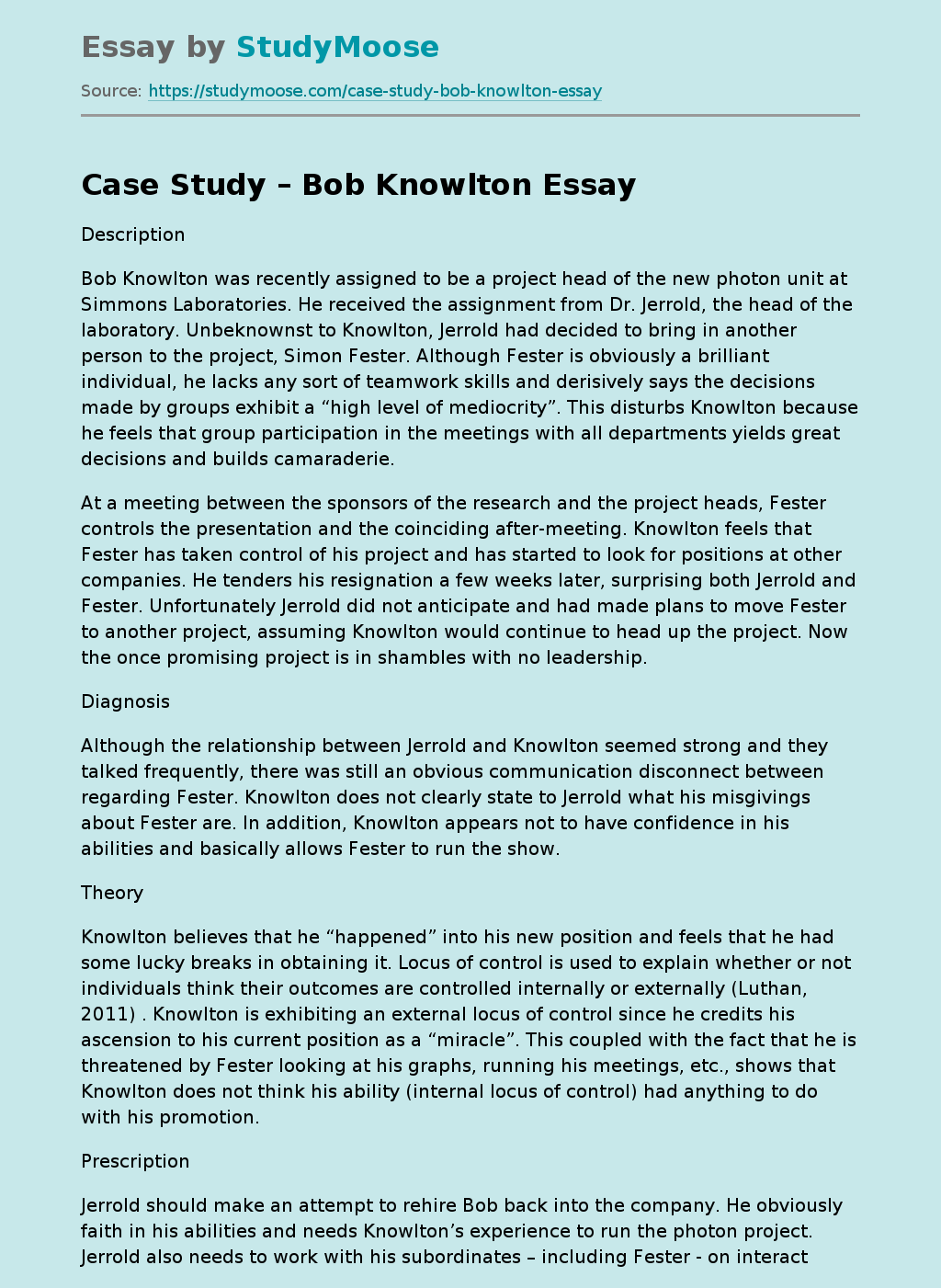