Like A Rolling Stone Analysis of Bob Dylan's Poetry

Not very many songs compare to Bob Dylan’s timeless “Like A Rolling Stone”. He explores areas that most conventional lyricists and composers do not touch. Bob tells us many of life’s lessons in a mere six minutes and nine seconds. The divine Bob describes life before and after the fall from fame and fortune by telling the stories of multiple persons, speaking to them in conversation. The theme of this song is loss, whether is it loss of social status, money, or trust for humanity.

Don't use plagiarized sources. Get your custom essay on
“ Like A Rolling Stone Analysis of Bob Dylan’s Poetry ”
Get custom paper
NEW! smart matching with writer

The first stanza tells the listener or reader not to “throw the bums a dime” because it is easy to loan too many peoples money and never be repaid, leaving the possibility of losing everything. The lines of the first stanza address someone as “you”, suggesting they are speaking directly to the subject of the stanza. The lyrics of “Like a Rolling Stone,” when close read as in the past you (the mystery individual the song is addressing) were rich and flashed your money around, spending and lending your money to people who never had any intent of paying you back.

Dylan uses a similar idea in “A Man of Constant Sorrow,” in lines 15 and 16, “If I had known how bad you’d treat me honey/ I never would have come.” This line implies that he came a long way to see someone and help them, and was never thanked for his efforts, in the same way the subject of this stanza was never repaid for their charity.

Line three goes on that people told you that if you weren’t prudent with your money you’d lose everything, and you didn’t take them seriously. You used to laugh at those who had less than you, but now you don’t laugh at all. You don’t act like a big shot anymore, because you’re working hard just to be able to eat, and don’t have the money to flash around.

“How does it feel?

How does it feel?

To be on your own,

With no direction home?

The chorus is repeated between each stanza, consistently asking each subject of the stanzas how it feels to be left with nothing when they once had something. Essentially, it means what it says. How does it feel to be homeless, rootless, and friendless, having no one know your name, like a drifter who is never welcome anywhere? There is only one literary device in the chorus, and that is a simile with line 5 of the chorus itself, “Like a rolling stone.”

It is suggested in the second stanza of lyrics that the well off do not always know how to take care of themselves. The narrator of this story tells the subject you went to the finest schools, but you never went to learn, you only went to party. Those schools never taught you any street smarts or how to take care of yourself. Now you are forced to learn how to, and you’re going to have to get used to it. You said you’d never deal with shady businessmen, but now you realize you don’t have any other choice. The “mystery tramp” (line20), isn’t offering to help her or give out charity, “he’s not selling any alibis” (line 21). In realizing this, you ask him if he wants to make a deal with you to get you out of your predicament.

The second stanza has two very rich examples of literary devices. The first is a metaphor in line 22, which reads, “As you stare into the vacuum of his eyes”. The man whose eyes the subject is staring into is about to take her for all she’s got, and is in a sense sucking her completely of her pride and status. In line eighteen there is an example of assonance with the words “now” and “out”.

Stanza three brings a new tale of woe telling an unfortunate what they did wrong in their business dealings. He or she is informed that they never saw that there was something wrong going on around you, like observers of the situation did. ” You never turned around to see the frowns on the jugglers and the clowns” (line 30). Dylan uses images of jokers, thieves, and clowns often in his lyrics, such as in “All Along the Watchtower” with the line “. . . said the joker to the thief.” You never realized that it isn’t a good idea to entrust your life or money to someone else. “You shouldn’t let other people get your kicks for you” (line 33). You used to parade around with your most trusted advisor, who was very cunning and sly. It was hard when you found out that he wasn’t who you thought he was, and that he had stolen everything he could get his hands on.

This stanza a few repeats of literary devices we’ve already seen in earlier stanzas. Line 30 has another example of assonance using the words “around” and “frowns”. Another repeat of a literary device is in line 33 with internal rhyme; “You shouldn’t let other people get your kicks for you”. There are two examples of metaphors with “the chrome horse” in line 34 and line 35, “who carried on his shoulder a Siamese cat”. These strange, difficult to understand lyrics are very common in Dylan songs. Sometimes entire songs are made up of these vague metaphors, such as “It’s All Right Ma, I’m Only Bleeding,” and “It’s a Hard Rain That’s Gonna Fall”.

A girl and all her friends are held up in society, and they spend their time partying and buying each other expensive gifts. They think that life could never get any better, or any worse. The girl is advised to pawn her diamond ring now. She used to laugh at those who she felt were below her, and the slang they used. Now she can see herself falling to the same fate, and there is nothing she can do. “You’re invisible now, you got no secrets to conceal” (line 53). Of course, if you have nothing and are nothing, you can lose nothing, because there is no one trying to tear you down.

The fourth and final stanza doesn’t slack off when it comes to literary devices. In line 45 there is assonance with the words “steeple” and “people” Immediately following it in line 46 there is an internal rhyme with “drinkin, thinkin”. Line 48 gives “Like a Rolling Stone” its only example of alliteration. “But you’d better take your diamond ring, you’d better pawn it babe” (line 48). The phrase, “Napoleon in rags” in line 50 is an example of synecdoche for all people of power and money who have fallen from their place in society.

“Like a Rolling Stone,” by Bob Dylan attempts to teach a lesson to the listener using different tales of woe. Many of Dylan’s songs are meant to be didactic, and I think this is mainly because Dylan was a folk singer, and at the time of his popularity a lot of songs were written to educate people about war, famine, and peace. “Like a Rolling Stone” is meant to teach people to be smart with their money and their trust, and to realize that they are invincible. Dylan uses a lot of internal rhyming and assonance in his songs, which make them flow so much easier to the music, and makes listening to the songs much more enjoyable.

The meter of “Like a Rolling Stone” changes through the course of the stanzas. Sometimes the lines are iambic, sometimes they have no meter at all, and are free verse. For the most part they are free verse. “Like a Rolling Stone” is a classic folk song in American culture, and instills in the listener the notion of falling from grace, while incorporating many literary devices to help prove a point and make the song’s statement more powerful. Many would argue that Bob Dylan is only a songwriter, not a poet. In time however, Bob Dylan will be honored, as he rightly should be, as a robust wordsmith who helped shape America with songs such as, “Like a Rolling Stone”.

Like A Rolling Stone Analysis of Bob Dylan's Poetry. (2016, Jun 21). Retrieved from https://studymoose.com/like-a-rolling-stone-analysis-of-bob-dylans-poetry-essay 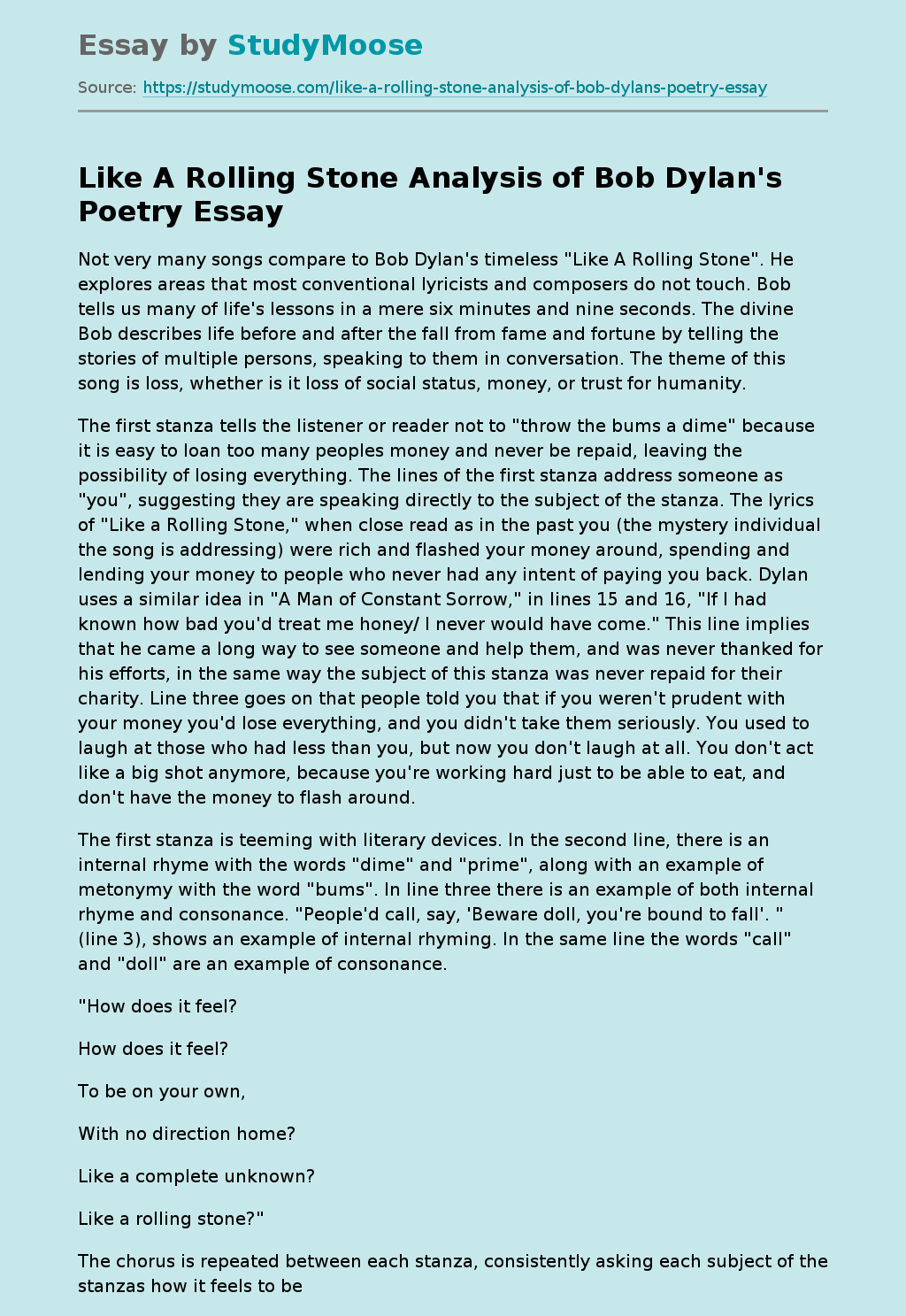