Bob Dylan’s iconic songwriting, unique and distinctive singing voice, as well as his controversial and thought-provoking lyrics has undoubtedly placed Dylan among the elites of modern, American musical history. This is not to say there are those who dislike and generally do not care for his songwriting, but almost everyone has come in contact with his expansive body of work. Born Robert Allen Zimmerman in 1941 in Duluth, Minnesota, he moved to New York City in 1961 and legally changed his name to Bob Dylan in 1962.

In the onset of his career Dylan focused on politically charged themes and acoustic/folk type guitar playing. Protest songs written in the 1960’s established a reputation as a free-thinking songwriter engrossed in the trials and tribulations of the times. After a break from this style, his 1976 album Desire contained the eight and a half minute mega-track “Hurricane,” which saw a return to the societal-minded songwriting that had helped him make his name.

“Hurricane,” is a narrative that describes Dylan’s own account of the events in New Jersey bar in June of 1966, which lead to the arrest and imprisonment of Rubin “Hurricane” Carter, an American middle-weight boxer.

Although this is one of his most popular songs, Dylan no longer incorporates it in his live sets. Also, despite its popularity, “Hurricane,” is truly a masterpiece and a wonderful lens with which to examine this great artist’s literary style and influence. Through the exploration of several critics’ analysis coupled with a detailed examination of the actual song lyrics, it is clear that the song “Hurricane” by Bob Dylan intertwines modern social elements of race and equity, the literary aspects of genre, language and metaphor, and his own unique and individualistic songwriting that has established him on a plateau of excellence rivaled by no other modern artist.

The racial aspects of the song ring out louder than any other theme. Upon listening to the song, Dylan’s emotionally charged singing and sharp lyrics clearly display that fact that Rubin Carter’s skin color had a major influence in his arrest and conviction. This, of course, is just Bob Dylan’s interpretation however. Evan Schlansky, a critic from American Songwriter.com, explores the issue of race and social equity in his analysis. ‘”Hurricane” functions like a real live detective story. It’s a song that peppers the listener with rich details and impolite truths, many of which are enough to make the hairs at the back of your neck stand up’ (Schlansky, 1). Paterson, New Jersey in the 1960’s was a hotbed of racism and racial issues, and the lyrics explain the direness of the situation.

Dylan sings, “In Paterson that’s just the way things go/If you’re black you might as well not show up on the street, ‘less you wanna draw the heat” (Metrolyrics.com, 1). Dylan is obviously critiquing the law enforcement and judiciary system, as well as striking a chord with racial and political activists everywhere. As mentioned before, Bob Dylan’s songwriting as always been poignant and controversial and although this song was released ten years after the incident, its themes are just as true. He lays blame on society’s elite with the lines, “And though they could not produce the gun, the D.A. said he was the one who did the deed, and the all-white jury agreed” (Metrolyrics.com, 1). These lines have been regarded as some of Dylan’s most controversial and along with his use of the “N-word,” he created an extremely moving and thought-provoking example of how racism is still present in society.

The first element of Dylan’s genre in “Hurricane,” relate to his writing the song as a narrative. This means he is singing the song as a story being told of the actual accounts as if Dylan himself was in the bar that night. Gerard Steen, in his essay “Metaphor in Bob Dylan’s ‘Hurricane'” writes, “…such story format options are also part and parcel of well-conventionalized cognitive genre schemes, such as narrative songs” (Steen, 190). Another important genre aspect of “Hurricane,” is his utilization of a protest song. “…the accusation of false conviction is clear enough to make the song a serious protest song from the beginning” (Steen, 189).

Protest songs were elemental in establishing Dylan’s reputation as a singer/songwriter. “Hurricane,” marked a return to this style of songwriting. Dylan also uses language to convey his message. Usage of extreme language and powerful metaphors enhance the drama and suspense that builds throughout the song. The metaphors used by Dylan are key to his message. However these metaphors are not always clearly displayed throughout the verses, and the reader (or listener) usually has to make up his/her mind (Steen, 196). These important elements of literary style add to the significance and complexity of this monumental work.

Aside from his singing voice, Dylan’s unique songwriting as placed him in a class of his own even among his peers. “Hurricane,” is a delightful piece to examine based on his return to the in-the-moment style songwriting that had made him famous in the 1960’s. Previous staples of Dylan’s first albums like “The Lonesome Death of Hattie Carroll,” and “Who Killed Davey Moore?,” had plots seemingly taken right from the papers and words beautifully woven into songs in a way completely peculiar to his own style.

In fact many critics argue that the song may have fit more unto one of his earlier albums such as Masters of War or The Freewheelin’ Bob Dylan (Schlansky, 1). The fact that this song was not released until 1976 also leads to the element of surprise that Dylan (ever the individual) would ever back-track to his previous writing styles. “Harking back to the days when he used to rip his song ideas from the headlines of newspapers, Dylan masterfully sums up and dramatizes Carter’s story, and also manages to embarrass the system by coming off smarter than every lawyer, cop, and jury on the case. To live outside the law, you must be honest” (Schlansky, 1).

Through the exploration of several critics’ analysis coupled with a detailed examination of the actual song lyrics, it is clear that the song “Hurricane” by Bob Dylan intertwines modern social elements of race and equity, the literary aspects of genre, language and metaphor, and his own unique and individualistic songwriting that has established him on a plateau of excellence rivaled by no other modern artist. Although there are those who do not enjoy Dylan’s music, one would be hard-pressed to find someone who had never heard of him.

He is undoubtedly one of the most famous and influential American musicians of all-time. “Hurricane,” stands as one of Dylan’s true masterpieces and incorporates the best aspects of his literary style and songwriting capabilities. The song was so influential many believe it even helped to get Rubin Carter released from jail and acquitted of all charges. “…but only ‘Hurricane’ actually helped get someone out of jail, even if it did take 12 years (Schlansky, 1). In conclusion, “Hurricane,” is a song that will stand the test of time, and shines as a beacon of accomplishment in an immense and critically acclaimed body of work. 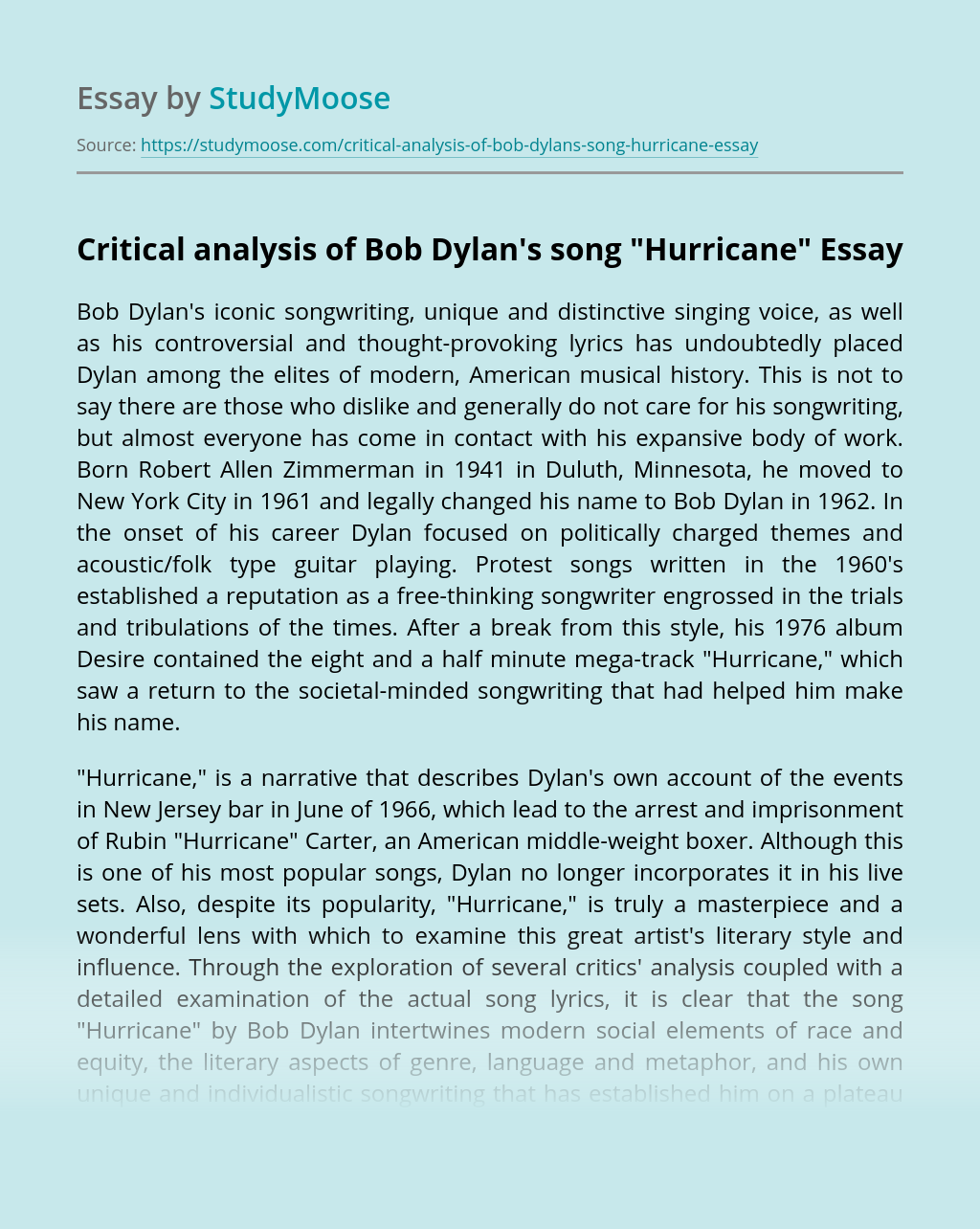