During an interview with the Los Angeles Free Press in 1965, Bob Dylan said, “All I can do is be me, whoever that is,” (Dylan) which perfectly describes the sentiment you get from his works. During his music career, he has changed many aspects of his image, music style and religion, going so far as to legally change his name from Robert Zimmerman to Bob Dylan. Living during a very fast changing society, his works reflect on the Civil Rights movement and other historically significant events.

Don't use plagiarized sources. Get your custom essay on
“ Bob Dylan’s Individuality and Social Commentary ”
Get custom paper
NEW! smart matching with writer

He is seen as a spokesperson for his generation through his deep and meaningful songs. Bob Dylan uses his pieces to comment on life and humanity, sparking social reforms. Bob Dylan was born named Robert Zimmerman in Duluth, Minnesota on May 24, 1941.

He grew up in a supportive, Jewish household, and began writing poems at the age of 10. When he was 14, he taught himself to play guitar, and played in a couple different bands in high school.

In college, he read an autobiography of Woody Guthrie which had a tremendous impact on his music career. Bob Dylan performed his versions of the Woody Guthrie’s songs at local coffee houses. Soon, he left college and hitchhiked to New York to visit his sick idol. After his death, Bob Dylan told Rock 100, “Guthrie was my last idol. My future idols will be myself.” This confidence contributed to his success as a musician. Bob Dylan got his break with a talent scout John Hammond. He released his self-titled first album in March 1962, which was filled with interpretations of old folk songs two original songs.

A second LP came out soon after that was only original compositions. Bob Dylan released two more folk LP’s before his big transition into a more electric rock type of music. In 1965 he released a half acoustic half electric album that received a lot of criticism from fans of his folk music.

One of his most popular albums, Blond on Blonde, released in 1966 featured many famous rock songs, and received much praise from critics. This album contains many protest songs including “A Hard Rains a Gonna Fall,” and “Masters of War.” These songs are thought to have been protesting the arms race during the Cold War, and exemplify how Bob Dylan used songs to comment on humanity and life. After this album, Bob Dylan broke his neck in a motorcycle accident and spent the next couple of years in recovery. After releasing many more successful albums, he went through a major transition from Judaism to Christianity. His next three albums reflected that transition, which confused much of his fan base. Bob Dylan continued to record and toured with a couple different bands during the 80’s. In 2001, he received a Golden Globe for the best original song in a movie for “Things Have Changed”. Bob Dylan is still alive and continues to make public appearances and occasionally perform. Bob Dylan’s songs use symbolism and imagery to reflect his views on life in a different way.

The song Blowin’ in the Wind is one of his most famous works. This song uses the phrase “blowin’ in the wind” to answer multiple questions about humanity that it puts forth. The song also has war themes, shown when it asks the question, “How many times must the cannonballs fly before they’re forever banned?”(5). The lyrics exemplify his distaste for violence. The whole poem reflects his view that humanity will never learn from their mistakes. Bob Dylan also has some less political and more love themed pieces. In the song Watered down Love, he talks about how pure love will only hurt you so you need to look for a “watered down love”. The repetitious phrase, “You don’t want a love that’s pure, you want a drown love, you want a watered down love” (12).

The song “Love is just a Four Letter Word” further continues the theme of true love being impossible. The song begins with him hearing others saying that love doesn’t mean anything, but in the end of the song he believes that himself. This is shown when it says “Though I never knew just what you meant when you were speaking to your man, I could only think in terms of me and now I understand,” (28). The songs are examples of how Bob Dylan uses his writing to comment on parts of life such as love and war. Bob Dylan’s writing does not go without criticism.

His frequent changes in music style and image cause distaste from many critics. Jann Wenner in Rolling Stone Magazine said, “Dylan created so many images and expectations that he narrowed his room for maneuverability and finally became unsure of his own instincts,”(Wenner,”The Rolling Interview: Bob Dylan.”) There are also arguments of Bob Dylan’s role as an artist. Some believe that his songs do not qualify him as an artist and should not be read and studied as poetry. Others, such as Christopher Rooks, believe that his songs, even if they are not written in a traditional poetic way, are still art because of the “what they mean and what they can tell us about the human condition, about the nature of reality as it concerns man, which is the very definition of art,” (Karwowski, “Is Bob Dylan an Artist?”). In another critical essay, Ellen Willis points out in Cheetah Magazine that although he may be seen as a poet, his poetry has “horrendous grammar, tangled phrases, silly metaphors, embarrassing clichés, muddled thought; at times he seems to believe one good image deserves five others, and he relies too much on rhyme.”(Willis, “Dylan”).

Although his songs receive a lot of criticism for his changing images and whether he should be seen as an artist, no one can deny the unique way Bob Dylan portrays humanity and his role as a spokesperson for his generation. Bob Dylan is considered to be the greatest influence on popular culture of all time. His surroundings inspired him to write about important historical moments such as the Cuban Missile Crisis, President Kennedy’s assassination, the Civil Rights movement. Many of his songs are directly written about these events, most notably, “The Death of Emmett Till.”, which was written about the murder of 15 year old Emmett Till, a black boy who was accused of flirting with a white girl. Other songs such as “Blowin in the Wind,” “The Times they are A Changing,” and “A Hard Rains a Gonna Fall” all have political and social meaning behind them.

He said that “the folk songs showed me…that songs can say something human.” (Dylan, 86) about his social commentary pieces. Bob Dylan was also a major player in the anti-war protests, sparked by the Vietnam War. His anti-war songs influenced activists, mostly college students who listened to his music. No other artist has had such a profound effect on the cultural evolution in America. He had an incredible influence on social reforms in this generation, as well as inspiring many other famous bands such as the Beatles, the Rolling Stones, Jimi Hendrix, and Eric Clapton. No one can deny that he was a factor in the revolution of hundreds of thousands of people. Bob Dylan uses his songs as a way to comment on life, humanity, sparking social reforms.

His childhood during the time period he lived in influenced his writing greatly through watching major historical event occur such as the Civil Rights Movement, World War Two, the Vietnam War and the assassination of President Kennedy. A famous song, Blowin in the Wind talks about society’s inability to change their views, and can be translated to be an antiwar anthem or a Civil Rights commentary. Bob Dylan is criticized mainly on whether his songs can be called poetry and if he can be considered an artist. Also, the politics brought into his writing are very controversial. All in all, Bob Dylan’s songs had a considerable impact on society because of his commentary on humanity. 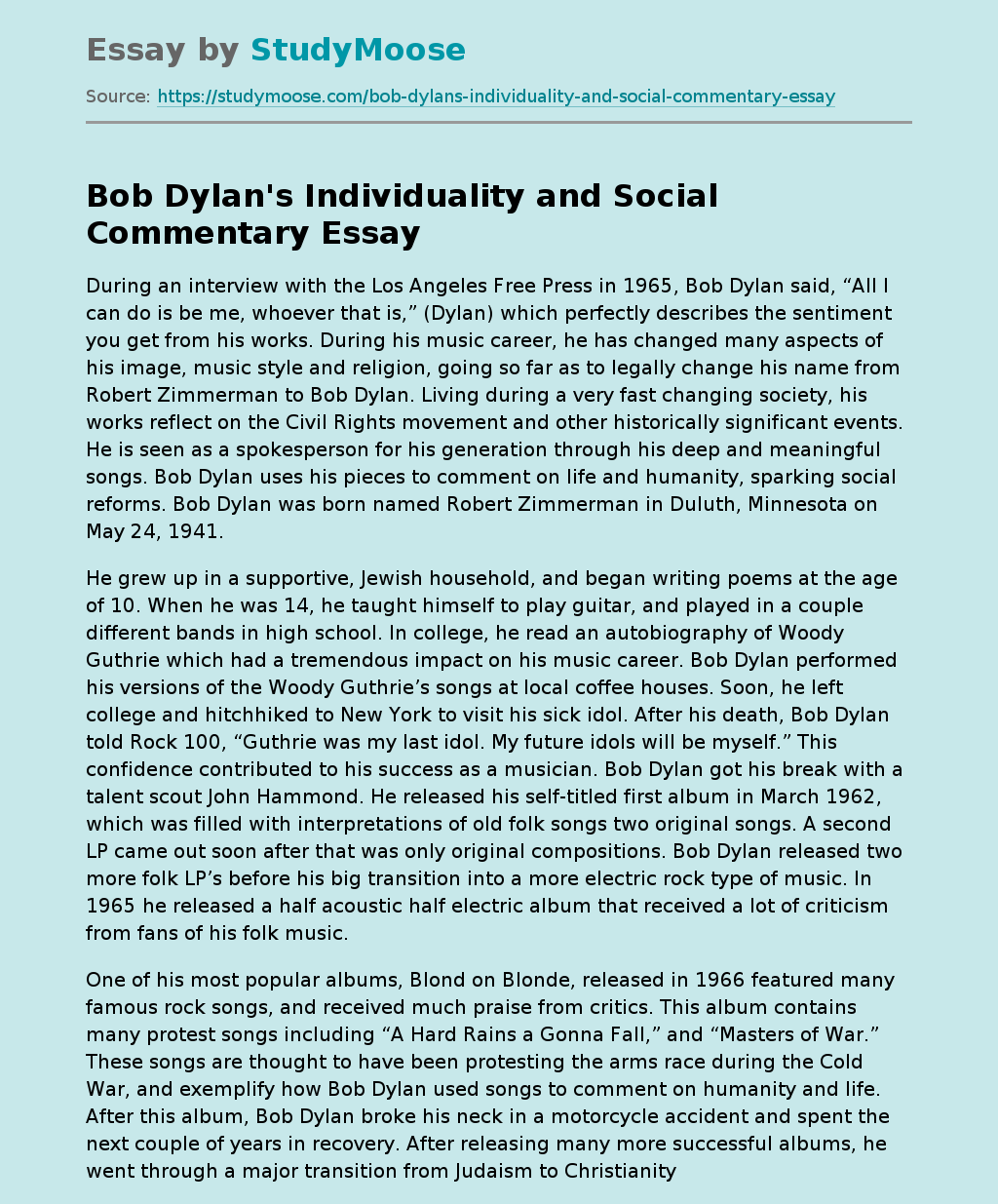