1. Does Bob Anderson have a problem, or are these the musings of an overly successful partner?

Bob has a problem: lack of vision and long range thinking for the business. Bob also has some unresolved issues with his colleague John Burgess, which is affecting his sense of direction.

2. If he has a problem, how would you describe it? He is ignoring important warning signs in his business and personal life, by busying himself with tasks that he enjoys, and that deliver him visible and easily measurable achievements – primarily sales and new business.

While business is currently very strong, Bob is personally responsible for too much of the success. Bob’s five vice presidents are craving guidance, training, mentoring and career direction, and Bob’s wife and family are craving attention and affection. By forgoing long term planning, training and effective delegation, Bob is putting both the business, and his personal life in jeopardy, therefore placing even more pressure on himself.

3. What are the underlying causes? Bob is still trying to prove to his colleague John Burgess that he is the right person for the managing partner role, after John was overlooked for the position. By burying the issue, and not addressing the problem in their relationship soon after his promotion, a rift formed between the two partners and has now divided the business. Bob underestimates how evident this is to his staff, and still feels that he has to prove his eligibility for the role, by demonstrating his value to the business through growth in billings.

4. What actions, if any, should Anderson take? Short term? Medium term? Long term? Short Term: As the business is currently performing very well, Bob could afford to take some time off for a holiday with his family. He needs to stop avoiding responsibilities not only in his business, but also at home. He is burying himself in his role and if he doesn’t quickly address the issues in his personal life, he is heading for a mid life crisis. Medium Term: Bob needs to address the underlying issues with his colleague John, and ask for his support in developing and growing the structure of the business. Bob must delegate responsibilities, especially those around business acquisition. Bob should invest in a formal training and development program, along with a more clearly defined path to becoming a partner for his vice-presidents. Long term: Bob should empower his vice-presidents to take on significantly more responsibilities, in order to reduce his personal exposure and workload. 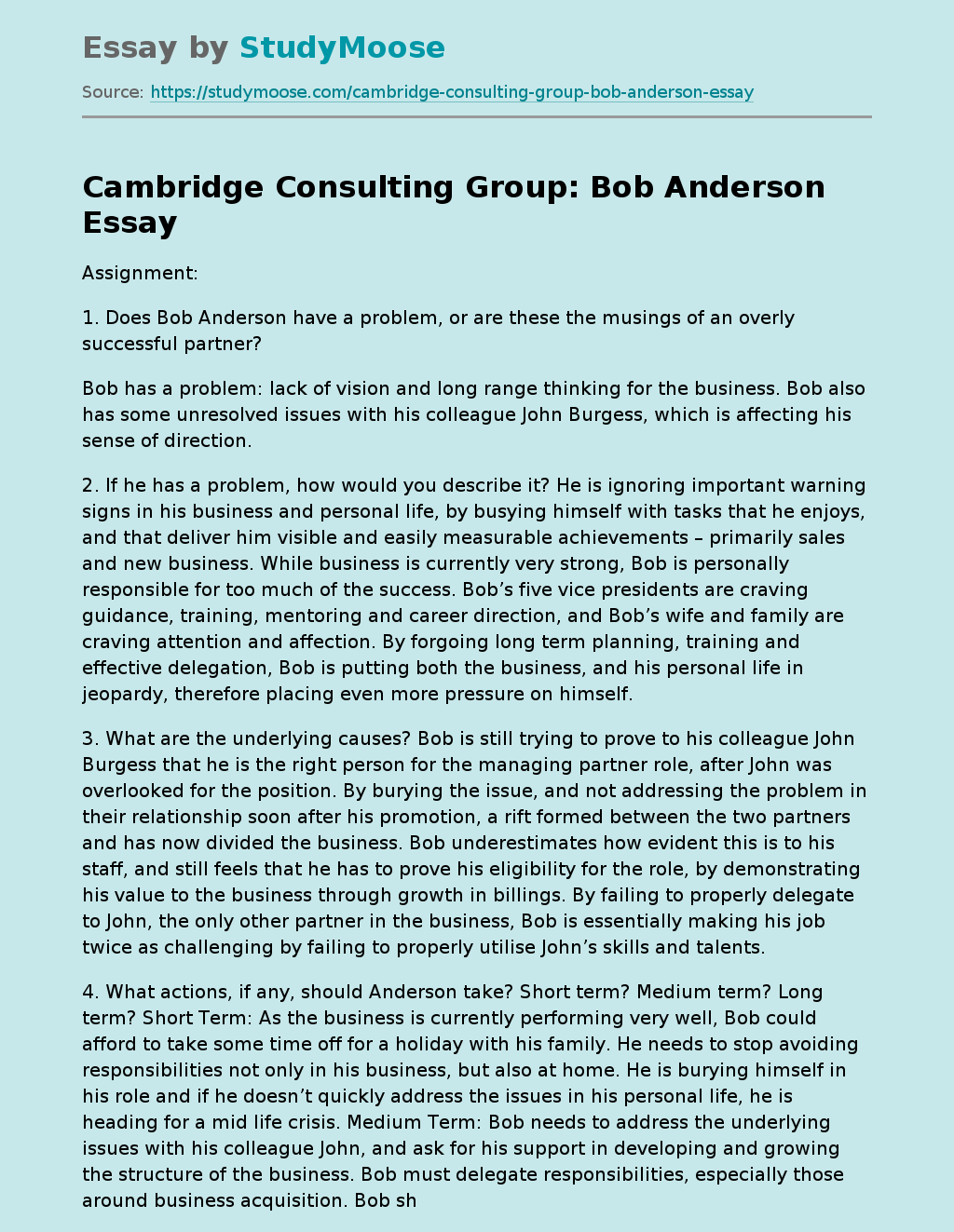