Lincoln Electric (LE) has been a producer of electrical and welding technology products since the late 1800’s. The company remained primarily a family and employee held company until 1995, then approximately 40% of its equity went to the public. James Lincoln, one of the founders, developed unique management techniques that effectively motivated the employees. These management techniques were implemented as an unusual (for the era) structure of compensation and benefits called “incentive management”. The incentive management system consisted of four key areas: factory jobs based solely on piecework output; a year-end bonus that could equal or exceeded an individual’s regular pay; guaranteed employment; and limited benefits.

Management successors to James Lincoln continued with this successful philosophy even during hard times. This incentive system provided Lincoln Electric with a significant competitive advantage over its domestic competitors.

This incentive system plus the bonus allowed Lincoln employees to earn more than their counterparts at other firms, which contributes to employee motivation. One additional aspect of Lincoln’s incentive system was that of limited benefits.

James Lincoln developed a system of minimal company paid benefits, where he rationalized that; fewer benefits would equate more funds available for employee bonus and compensation. The successful incentive program and participative management style provided an environment where a Lincoln plant could produce many times (up to three times-with half the personnel) that of a similar manufacturing plant. The employee involvement program and the incentive program at Lincoln were significant contributors to their capability to maintain a solid reputation as a high quality producer, which has driven brand loyalty.

When combined with the approachable and participative management style, Lincoln’s culture was able to continuously leverage changes from their employees. The management at Lincoln provided an environment where employees were free to make suggestions or complaints, these ideas became changes and the changes turned into innovations. Such as manufacturing equipment modifications that would run, two to three times their original rate. Lincoln continues to be profitable by significant contributions of these production efficiencies. An increase in production rates (with the same or less resources) equates directly to: higher returns on investments, lower cost of goods sold, and the ability to do more with less (especially during economic challenges). In general, there is an entrepreneurial attitude at LE and the ability to harvest these innovations is Lincoln’s true competitive advantage. As of 1995, Lincoln Electric controlled 36% of the $1.5 billon U.S. market for welding equipment and supplies, where it is considered the leading competitor.

The Lincoln Electric Company possesses financial stability, they have recently brought their debt under control as shown in Appendix B-Brief Financial Analysis, which shows an improving debt trend (current, quick, debt to assets, and debt to equity ratios) this is considered an enabling item when embarking upon a new international venture, financial/resources to overcome potential problems. In addition, Lincoln has experienced a strong recovery illustrated by the trends detailed on the net sales and income after taxes charts shown in Appendix B-Brief Financial Analysis.

Lincoln will have to overcome its limited success in their prior international ventures, evident by the closures of plants in Germany, Japan, Venezuela, and Brazil. Some of this limited success was due to their lack on international experience and a failure to provide assistance, “sink or swim” corporate attitude. LE might not have been looking at a long-term view and may have given up on these plants too early. Similar domestic ventures take on the average seven years before becoming profitable. Additional reasons for early international failures was the lack of contingency planning in the form of no corporate support, advice or direction. Another shortcoming of their early international ventures is that Lincoln attempted to apply its incentive management universally to all countries/cultures. They failed to understand the importance of tailoring rewards and incentives for specific countries/cultures.

In additional to the CEO having a planned oversight into the expansion there will be council consisting of each of these presidents to plan, integrate and implement global strategies. The compensation for these presidents will also include interregional cooperation. Both of these efforts address key Lincoln weakness from there prior international ventures of: “sink or swim” corporate attitude and interregional destructive competition. One final item is that Lincoln realized that in the second wave of international expansion true understanding of a country/culture is as important as technological skills.

First, Lincoln must continue to utilize its successful incentive and management philosophy formula for employees in the U.S. The domestic operations provide the financial/resource foundation or enabler for continued global expansion, but with no loss of focus on the domestic operation. Lincoln should complete a product structure analysis to determine which plant (domestic or international) should build which product. This analysis should consider all external environmental (particularly political) factors and ensure the company’s strategies for long term and short term goals are a significant part of the analysis. A key roadblock to the expansion into Indonesia is the political environment.

The civil unrest and an uncertain future government must be watched and analyzed with great care. A meeting should immediately be setup with the local government to present Lincoln’s long-term strategy. However, prior to this meeting Lincoln must conduct extensive research into the stability, history and any significant background information about the current government and then decide how to approach this potentially volatile situation. Also Lincoln must establish contingency plans should the government become a problem and then be continuously adjusting these contingency plans as the situation changes.

One threat to Lincoln’s expansion plan to enter the stick welding consumables markets is that it is dominated by two other multinational firms (see Appendix A-Consumables Market); they control approximately 60% of this market. Once again, Lincoln must conduct continuous extensive market research to determine risk, provide data for their living short-term and long-term tactical and strategic plans. This marketing research will also support the development of Lincoln’s entry strategies. Once, the production focus areas are defined Lincoln should develop incentives to ensure cooperation with no destructive competition between regions, interregional management compensation will help.

A consistent set of financial metrics must be developed and utilized to determine regional performance; each region will be compared in the same manner. Lincoln must also ensure that start-ups be provided a “safety net” of sorts that utilizes resources/innovations to combat obstacles that would prevent success. Another recommendation is to collect lesson’s learned on the failed European operations, ensure that the same situations are not repeated in Asia/Indonesia. The regional president’s council will help to ensure success, however control in key decisions should be left to the corporation.

A joint venture in Indonesia is the best way to enter. Tira’s relationship with high level government officials is very important due to the political situation. SSHJ has the financial strength that Tira does not. Lincoln should go into a joint venture with both Tira and SSHJ since each firm brings complementary strengths. This joint venture must be carefully crafted; compensation will be direct as a partnership type between SSHJ and Tira, where incentives exist to ensure mutual success. An agreement with SSHJ to build a new factory should be completed and support for a low interest loan to help Tira with maintaining Lincoln inventory. This joint venture will be carefully controlled and monitored by Lincoln and they will maintain the maximum amount of ownership allowed by Indonesian law. As mention previously, Lincoln’s competitive edge is its ability to tap into employee innovative talents and then to quickly implement them. Lincoln should conduct cultural research into what types of rewards apply to the Indonesian culture and then custom design an incentive system that utilizes these rewards.

The successful implementation of this similar formula of corporate culture and incentives will allow Lincoln once again to continuously improve through employee innovations. The custom designed incentive reward may be: benefits on a rising scale; additional vacation/compensation time; or company ownership as a stock option plan instead of the bonus/compensation plan used in the U.S. Lincoln should continue to leverage their brand reputation/loyalty, and leverage their ability to produce at a lower cost (through its successful innovation processes) and to break into this new market; also, price competition should be avoided as an entry strategy. Instead, compete on product value.

The planned entry strategy into the stick welding consumables is the right direction, the growth rate and potential market is very attractive, however the entry strategy must also be developed to counter whatever defensive or offensive moves the other controlling multinational firms do to prevent Lincoln from gaining market share. Finally, Lincoln’s long-term strategies must be compatible with achievable goals that allow sufficient time (seven to ten years) to for the Indonesian venture to fully develop profitably. 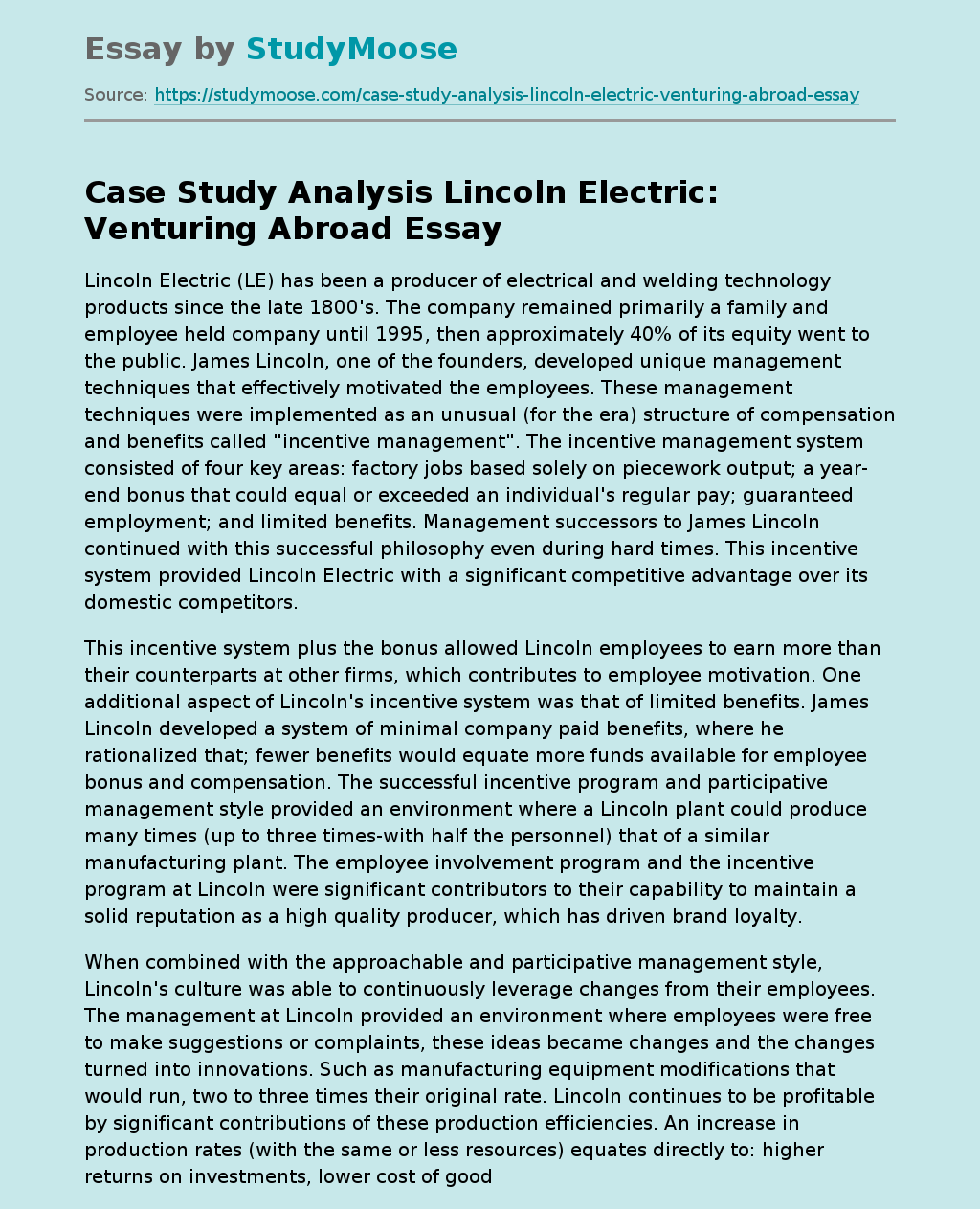