Lincoln Electric Company is a manufacturing company, which has been focusing on welding products for the recent 30 years. The company had outstanding brothers leading the company to success. John was a technical genius and he brought the best skills in production and James was good at management and he was working on the employees’ incentives. The company gained its reputation through the world war till present as the welding equipment supplier with higher quality and lower price at the same time.

For the production aspect of welding equipment, it is an advanced production line with continuous flow with high flexibility and low idling time.

Lincoln Electric Company has a unique system to incentive its employees to work much beyond the industry average, not only with faster speed but also with less turnover rate. Employees are encouraged to express their suggestion about the present production plan. Under such system, with John Lincoln’s patents and technology, the company maintained its productivity and quality advantage in the market, and improved the production line all the time.

James Lincoln built up the company’s image by introducing his philosophy to the company. He concentrated on the importance of competition and clearance of reward and punishment method during daily operating. He played well with 5Rs and gained unbelievable efficiency in production line. The system was the key to the decade success of Lincoln Electric Company.

James set up a new payment plan called straight piecework plan, each worker on the assembly line got paid by his finished work.

He also introduced a year-end bonus plan which could equal or exceed individual’s annual regular pay. The bonus pool was determined by a semiannual “merit rating”, which include dependability, quality, output, ideas and cooperation. These are great compensation strategies to encourage workers to work harder. Apparently, the workers themselves would try their best to reach his best capacity and efficiency to earn the most.

To make the system fair enough to every worker, James set up many rules. For example, piecework prices couldn’t be changed just because, in management’s opinion, the worker was making too much money. Piecework prices could only be changed when management had made a change in the method of doing that particular job and under no other conditions. Both of the piecework prices and the ‘merit rating’ could always be challenged by everyone. As a result, employees were satisfied with this fair incentive system by the help of all these rules.

The employees in the company felt that they were their own bosses as long as they do their jobs. They always had the right of challenging the policy and were welcome to bring up their advices. Also, the guarantee of employment made the employees more willing to improve the production and efficiency. All of these greatly drove the workers to build relationship with others and communicate with supervisors or management anything in mind to optimize the production.

Lincoln Electric Company provided stock shares to the employees to offer them the resources by company’s capital and profit situation and therefore encourage them to have more concerns about their works. They would be more to think about the interests and improvement of the company. This decision could help the company easily control and make good use and of all the resources among the workers.

All the above James did was to set up the Role for the workers, and awake their sense of competition. James established the life-time employment for the Lincoln Electric Company, every worker on the assembly line felt that they would be forever a part of the company, their salary was determined by the productivity, and the only way to get promotion internal was to stand out among the workers. They were set an extremely strong role in mind, they wanted to provide their best to the company, they loved their job and felt strongly pride and needed, which greatly fulfill one’s goal of working. Besides, managers in Lincoln Electric Company were not high in the sky, they worked and lived with workers in daily life, they had free atmosphere at work and they strengthened the feeling that workers were managing themselves.

In conclusion, this incentive system was crucial for Lincoln Electric Company’s success. However, it is difficult for the others to copy because it is based on the culture of competition and justice, which was set up in the very beginning. In the future, the effects of this system might be comparatively lower because machines, which don’t have incentive, are replacing workers in production. However, it still has advantage as there are people in the company, and their innovation in production line design will also benefit the company for long.

With the years going by, Lincoln Electric Company, despite its excellent performance in production, has been growing in a very steady speed, and never really grew to a large scale company. The core problem is about their management style in top level. With such a highly efficient production line plant, the company’s management is like a job-shop, the executives take charge of every small decision of almost everyone. This greatly weakens the possibility to expand, because the one or two top management are not available dealing with so many daily issues. In addition, due to the size and life-long employment, company could hardly employ more workers. As a result, Lincoln’s production failed to meet the demand on time in peak time of demand, leading to a delay in delivery and losses its customer.

Besides, although the Advisory Board Meeting offered opportunities to communicate between management and workers, the final decision was always made only by top management. So the bottleneck and real problem came from the management concerned too much and could not give the middle management more power to make decisions, which limit the company’s size, capacity, revenue and profits in spite of its outstanding working efficiency. Under such top management behaviors, Lincoln’s incentive system is not very sustainable. With limited expansion, there would be less management occupation for the workers, if workers became older, or had some health/family problems, they would have to suffer from a loss of income. Many years of devoting could not guarantee a comfortable occupation would make them feel lost and abandoned.

Lincoln’s executives have to learn to give up some power in decision making and trust their middle management. Therefore, the size and capacity of the company can grow to gain more revenue and profits in the future. Each management member could also relief the pressure. When the executives focus on expanding, more middle management and low-level management are required and could be awarded to the skilled old employees who have potential in management. This strategy will also increase the loyalty of employees by setting Roles and Reward issues. Finally, the proper expand will also solve the shortage of capacity, new plant will definitely bring more productivity and occupations.

While expanding the company’s size, the company should build more professional organization structure, allowing different levels management and increase the management diversity with different backgrounds. Each level has its own power to make adjustments. More diversity in management will make the company more professional, global, and competitive in bigger markets. Currently, Lincoln even has no acceptable meeting room or offices in its building! It will increase the difficulty in negotiating and trust building. So the organizational structure building is another must strategy to combine with the expansion strategy. 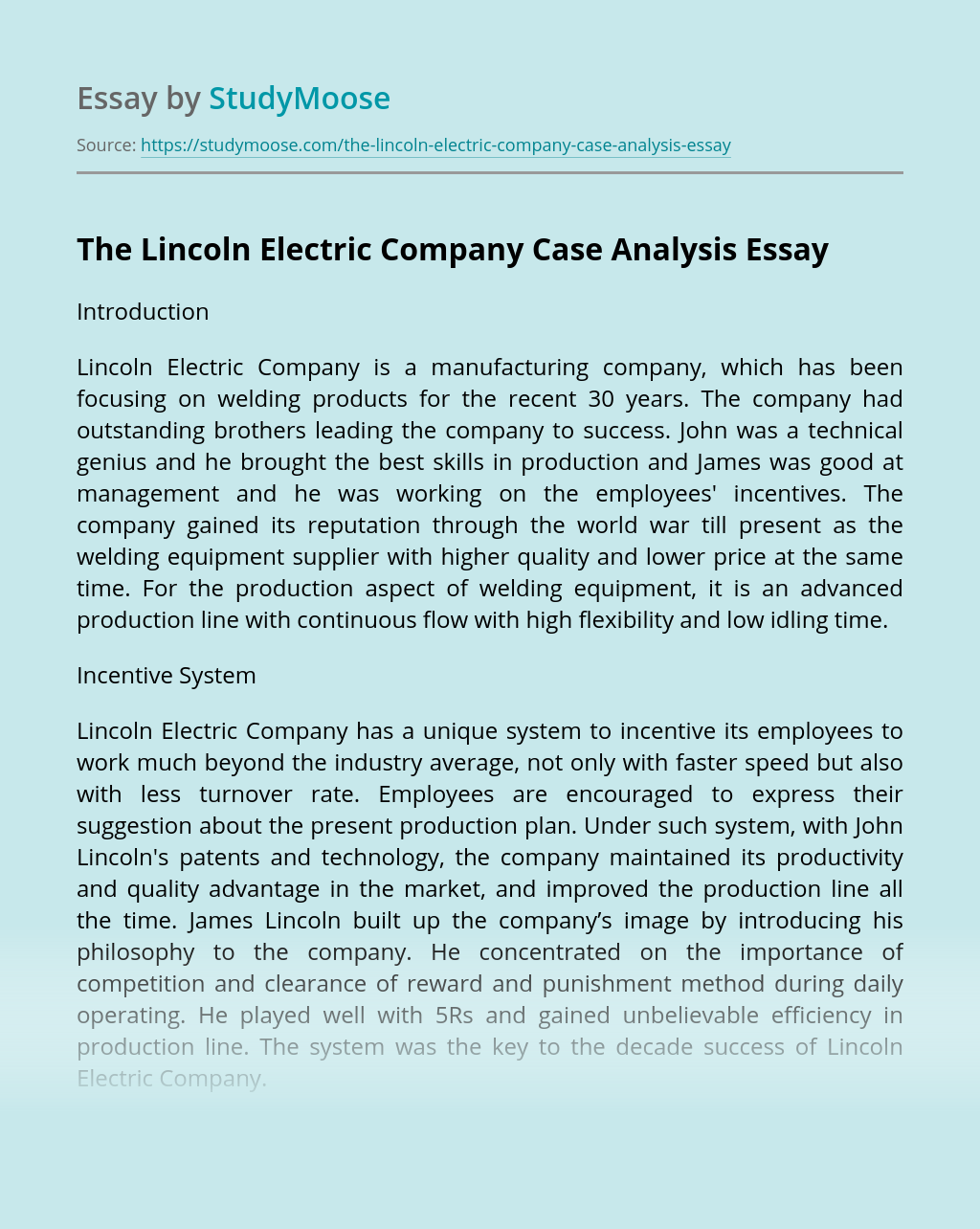