Capital Punishment has been part of the criminal justice system since the earliest of times. One of the earliest portrayals of this practice was seen in Hammurabi’s Code, which decreed death for even the smallest crimes. However, in more recent times, opponents have shown the death penalty to be racist, barbaric, and in violation with the United States Constitution as cruel and unusual punishment. In this country, although laws governing the application of the death penalty have undergone many changes since classical times, the punishment has endured and controversy has never been greater.

Don't use plagiarized sources. Get your custom essay on
“ Capital Punishment has been part of the criminal justice system since the ”
Get custom paper
NEW! smart matching with writer

The right to reject life imprisonment and choose death should most certainly not be respected, but it changes nothing for those who oppose the death at the hands of the state. The death penalty is morally and practically irrational; As Howard Zinn pointed out, Capital Punishment could not be justified in any society calling itself civilised. In other words, society has long since left behind the barbous customs from the cruel eye for an eye practices.

State killings are morally inadequate. Why do governments kill people to show other people that killing people is wrong? Humanity becomes associated with murderers when it replicate their deeds. Would society allow rape as the penalty for rape or the burning of arsonists’ homes as the penalty for arson? The revolutionary peacekeeper, Mahatma Gandhi once described the faults of retaliation when saying, An eye for an eye makes the whole world blind.The majority of death-row inmates were or are represented by court-appointed public defenders, and the state is not obligated to provide an attorney at all for appeals beyond the state level.

This piece of information is substantial enough to say that trials are unfair to the poor, as a richer criminal who could pay for a team of lawyers would be more likely to escape the punishment. The application of capital punishment is racist. About 40 percent of death-row inmates are black, whereas only 8 percent of the population as a whole are black. In cases with white victims, black defendants were four to six times more likely to receive death sentences than white defendants who had similar criminal histories. Studies show that the chance for a death sentence is up to five to ten times greater in cases with black victims than white victims . Also, The mentally disabled are victimized by the death penalty. Since 1989, when the Supreme Court upheld killing of the mentally disabled, at least four such executions have occurred. According to the Southern Center for Human Rights, at least 10 percent of death row inmates in the United States are mentally disabled. Unfortunately, a massive difficulty with capital punishment is the chance of Innocent people being executed (which has happened). With the death penalty, errors are irreversible. According to a 1987 study, 23 people who were innocent of the crimes for which they were convicted were executed between 1900 and 1985. Judges and others are reluctant to shorten the execution process for fear that hasty procedures will lead to the executions of more innocent people. Until human judgement becomes without fault, this problem alone is reason enough to abolish the death penalty at the hands of the state more dedicated to vengeance than to truth and justice.Aggravating circumstances for murder are defined in the applicable death penalty statute. Circumstances considered for murder include: The crime was particularly heinous or cruel, there were multiple victims, the crime occurred during the commission of another felony, the victim was a police or correctional officer in the line of duty, the offender was previously convicted of a capital offense or violent crime, and the offender directed an accomplice to commit the murder or committed the murder at the direction of another person. In the nonfiction novel, In Cold Blood by Truman Capote, the main characters Dick and Perry were guilty of several of those circumstances that eventually led to their demise. The multiple victims included all four of the Clutter family when Dick Hickock and Perry Smith attempted a robbery. Both were former inmates and had previous dealings with the law, as Dick had chosen Perry for his instinct as a Natural Born Killer. Furthermore, it seems that both Dick and Perry fell almost directly under the common background of one convicted of death. Juries in rural counties are more likely to impose the death penalty than those in urban areas. Dick and Perry were convicted in Garden City, a small to moderate sized town. Both Dick and Perry were unemployed, poor criminals whose actions were unacceptable, yet they were unable to truly fight back until Truman provided a lawyer. Also, Dick and Perry had terrible mental health problems that were addressed by Capote in his novel. For example, Perry had was abused by his parents and later on in an orphanage while two of his siblings committed suicide. During the trial, Perry was evaluated unjustly and not by a psychiatrist, and was proved to be sane. This only justifies and reinforces the points stated above that capital punishment is biased, unfair, and is harmful not only to the offenders themselves, but to the entire community. As an argument of support for capital punishment exists and there is a legitimate case that death is a substantial deterrent because of the fear surrounding it, execution is unethical because it does not allow for growth. Most people who murder commit the crime without even considering their punishment, and capital punishment only serves to end the life of someone who could have read and made some meaning in their life. Those who murder should not see a day in the free world because neither could their victims, and lifetime imprisonment offers a sizable punishment as well as a potential for moral progression.Opposition to the death penalty finally achieved its goal when in 1972 the Supreme Court struck down death penalty laws, finding fault not with the theory, but with the method (Dick and Perry were hanged). However, all was lost when four years later, the decision was once more revised and ruled the death penalty once more legal (introduction of lethal injection). Death row will continue to expand. It is almost certain that the rising level of executions will be widely condemned. The future of capital punishment may finally come down to the question of expense. Executions do not save money. There are those who cry that we, the taxpayers, shouldn’t have to support condemned people for an entire lifetime in prison-that we should simply eliminate them and save ourselves time and money. The truth is that the cost of state killing is up to three times the cost of lifetime imprisonment. A single capital trial now costs millions of dollars. The enormous volume of continuing appeals strain both federal and state court systems. Unless workable solutions are found to the practical difficulties involved in the administration of the death penalty. American society eventually may decide to significantly restrict or even abandon capital punishment.

Capital Punishment has been part of the criminal justice system since the. (2019, Aug 20). Retrieved from https://studymoose.com/capital-punishment-has-been-part-of-the-criminal-justice-system-since-the-essay 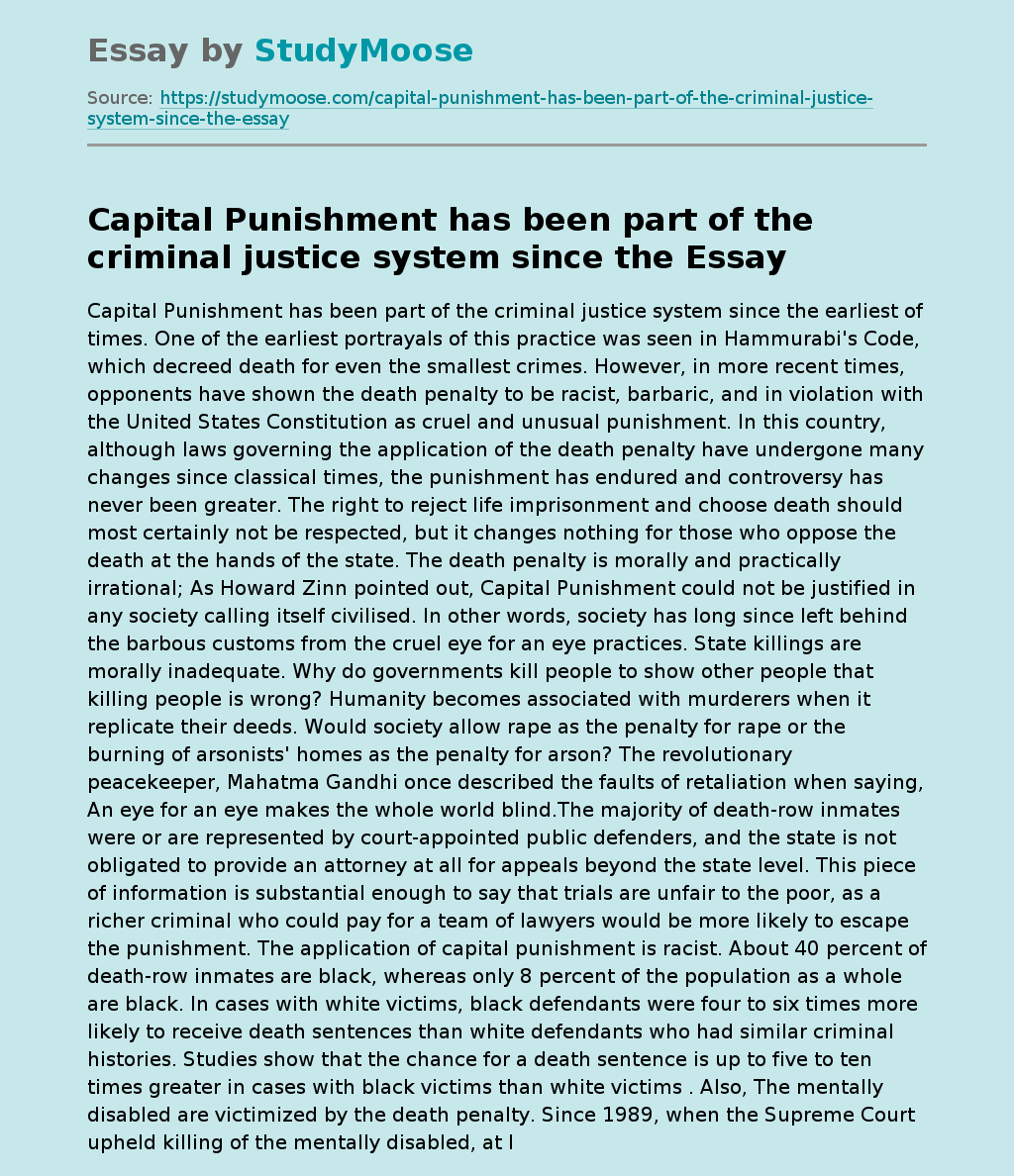