Capital budgeting decisions made too early

Hughes Corporation employs a machine to manufacture its output. It has identified a replacement but wishes to carefully consider the effect on various aspects of the business if it continues to use the existing machine compared with the effect if it replaces it with the new machine. The importance of Capital Budgeting cannot be underemphasized as a replacement decision can impact Hughes Corporation for many years, and so it must be carefully planned.

A bad decision can have a significant effect on the firm’s future operations.

Don't use plagiarized sources. Get your custom essay on
“ Capital budgeting decisions made too early ”
Get custom paper
NEW! smart matching with writer

Capital budgeting decisions made too early can also cause problems because generally capital budgeting projects are large investments, thus early decisions may generate unnecessary costs for the firm. Hughes Corporation would like to assess whether it should replace the machine now with the new one or defer the decision.

The idea for a capital budgeting project, whether generated by customers, employees, suppliers, should be based on the requirements and experiences of the corporation, and of these groups. For example, a sales representative might often receive customer feedback that there is a need for the product to have particular characteristics that the firm’s existing product does not have. The sales representative may present this idea to management, who subsequently evaluates its viability by consulting with production personnel, engineers, and by carrying out a feasibility study.

Once the idea is proven to be viable the financial manager conducts a capital budgeting analysis to ensure it will be beneficial to the firm with respect to its value.

The corporation is satisfied with the output from its existing machine. However, its efficiency is comparatively less than a new machine and the operating and maintenance costs of the existing machine are also higher. Research conducted on internet sources revealed an article published in the Engineering Review (September 22, 1999) which explained the rationale behind the decision on replacing an asset.

As pointed out in the article by Hartman, traditionally, a replacement analysis is undertaken, taking into account an optimal replacement schedule and building-in minimization of purchase, maintenance, operating costs and salvage value, over some time horizon. These costs are based on the asset utilization over its useful life (Hartman 1999).

In the case of this corporation, to determine the value of an asset, we should compute the present value of cash flows that the asset is expected to generate over its useful life. When the value of the asset is determined, we can determine if we should invest in the asset by comparing its computed value to the purchase cost of the asset. If this decision-making procedure is followed it will help ensure the firm will maximize its value—that is, if an asset has a value to the firm that is greater than its cost, the firm’s value would be increased if the firm purchases the asset (Besley 2007).

Besley continues to explain the techniques employed in assisting a decision to be reached by aggregating the cash-flows resulting from buying a replacement asset. However, as the cash-flows span over several years (over the asset’s useful life) the cash-flows should be discounted to arrive at their net present value.

Capital budgeting decisions made too early. (2018, Oct 17). Retrieved from https://studymoose.com/capital-budgeting-decisions-made-too-early-essay 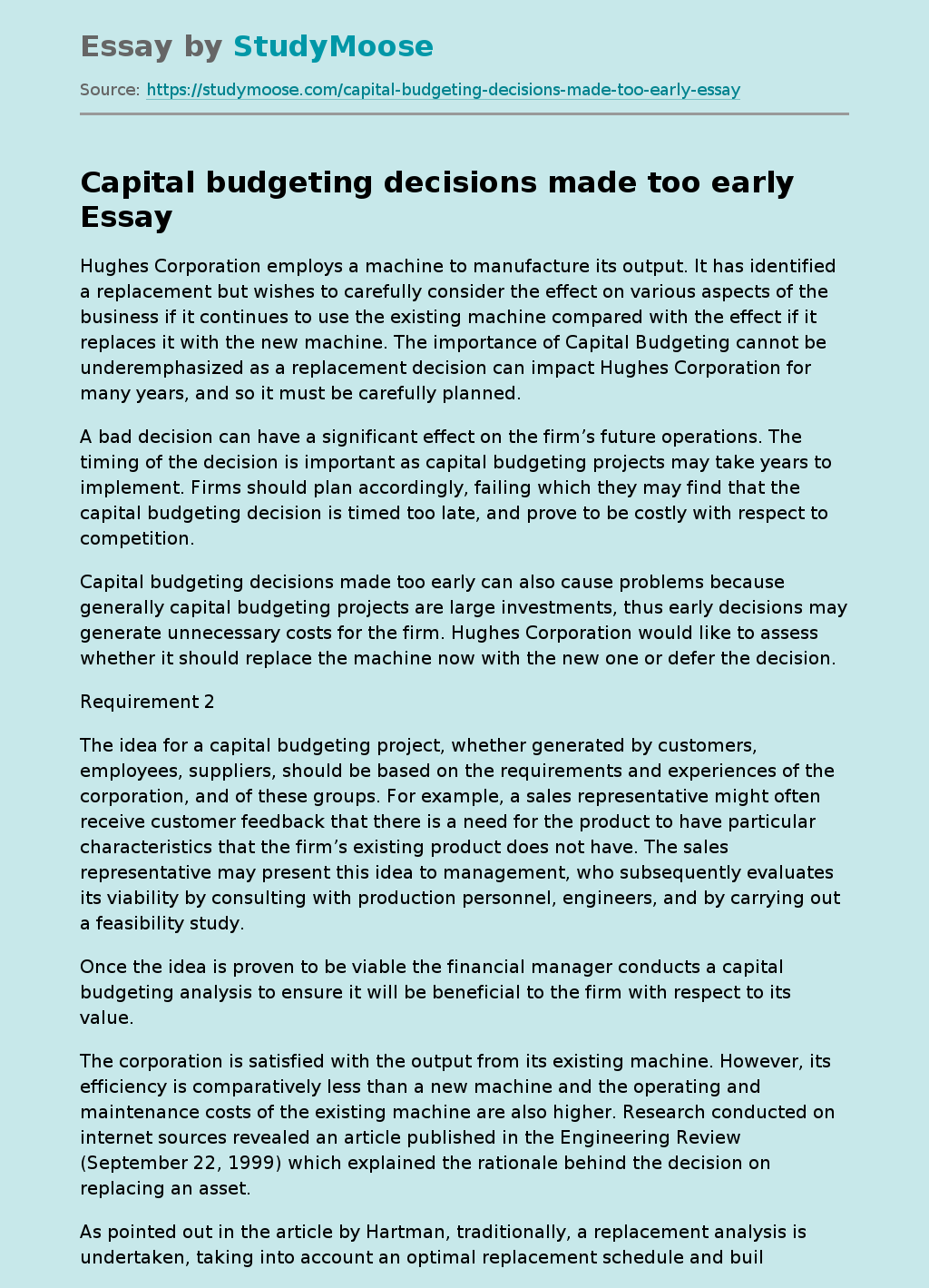