Hasty Decisions in Romeo and Juliet

The tragic tale of Romeo and Juliet hosts a plethora of hastily made decisions. As ill-fated as the two star-crossed lovers may have been, the root of all their problems can be traced back to their rash decisions. The reason Romeo and Juliet meet in the first place is because Romeo and Benvolio decide on a whim that they are going to go to the Capulet party to show Romeo that there are other beauties besides Rosaline. After this all of the decisions of the characters are made on the spot, with little to no forethought going into them.

Don't use plagiarized sources. Get your custom essay on
“ Hasty Decisions in Romeo and Juliet ”
Get custom paper
NEW! smart matching with writer

Had the characters thought their choices through a bit more thoroughly then perhaps they wouldn’t have had to deal with the resulting tragedy. These are but a few of the flawed choices that ultimately lead to Romeo and Juliet’s untimely demise. As mentioned the decision that caused the ignition of this ill-fated romance was when Romeo and Benvolio made the choice to go to the Capulet party.

They hear about it when reading the Capulet messenger’s letter and rashly decide to go to the party so as to help Romeo get over Rosaline.

The fact that they willingly decide to go to their enemy’s party to find women is abhorrent since they know the troubles that could ensue if they got caught. If they had put a little more thought into the consequences of such actions then maybe Romeo and Juliet would not have ended up in such a turbulent romance.

Another poorly made decision was when after knowing each other for a single day Romeo and Juliet decide to get married. The amount of flaws in their logic whilst deciding upon this course of action is numerous.

First, after such a short amount of time they hardly know each other, second, before making such a huge step for their futures it would’ve been wise to first see if they could do anything to help end their families feuding so that they wouldn’t have to keep their love a secret. Their secret marriage inescapably leads to many problems including that Juliet’s dad wants her to marry Paris. Since she is already married this idea throws her into a fit of rage and despair.

This leads to another whirlwind of events that in the end forges the way to one of Romeo and Juliet’s final and greatest mistake. The last and quite possibly the biggest mistake that the lovers make is when they decide to take their own lives to be with each other. The reason this happens is due to even more hastily made decisions. The first event that leads to this tragic ending is when Friar Lawrence decides to give Juliet a potion to make her sleep for a day despite not having mentioned any f their plans to Romeo. The friar does send a letter but it gets delayed so Romeo has no idea that Juliet’s death is a hoax. Instead of doing something rational Romeo then decides to purchase a vial of poison and kill himself at Juliet’s grave. At the grave Romeo ends up killing Paris and a few minutes before Juliet is suppose to wake up takes the poison and dies. If Romeo had waited a little longer or tried to go to Friar Lawrence to see about what had happened this catastrophe could have been avoided.

Shortly after Romeo dies Juliet wakes up and is stricken with insurmountable despair at his death. When the friar tries to get her to leave the tomb she finds a dagger and kills herself. Juliet’s decision to kill herself because she is unable to be with her lover in life is quite a brash and thoughtless decision. After she woke up she could have left with the friar and tried to sort out her feelings first before making such a permanent decision, but instead her forthright nature gets the best of her and she ends up dead because of it.

Romeo and Juliet perfectly depict that rash decisions lead to defective conclusions. In conclusion Romeo and Juliet can be more accurately described as a tale of hastily made decisions leading to unfortunate conclusions rather than the story of two star-crossed lovers who were destined to be kept apart. The key events that lead to their deaths are all caused by someone caught in the heat of the moment and not thinking clearly.

From the decision to go to the Capulet party to all the events that contributed to their fast paced romance, perfunctory decisions have overshadowed them all. Through these choices the tragic flaws of Romeo and Juliet are revealed. It becomes apparent early on that Romeo’s tragic flaw is his impulsiveness and inability to control his love for Juliet. Juliet’s tragic flaw is her loyalty towards Romeo which leads to her death when she is separated from him. Romeo and Juliet were the victimized by themselves, and ultimately it ends up leading to their untimely deaths.

Hasty Decisions in Romeo and Juliet. (2016, Oct 11). Retrieved from https://studymoose.com/hasty-decisions-in-romeo-and-juliet-essay 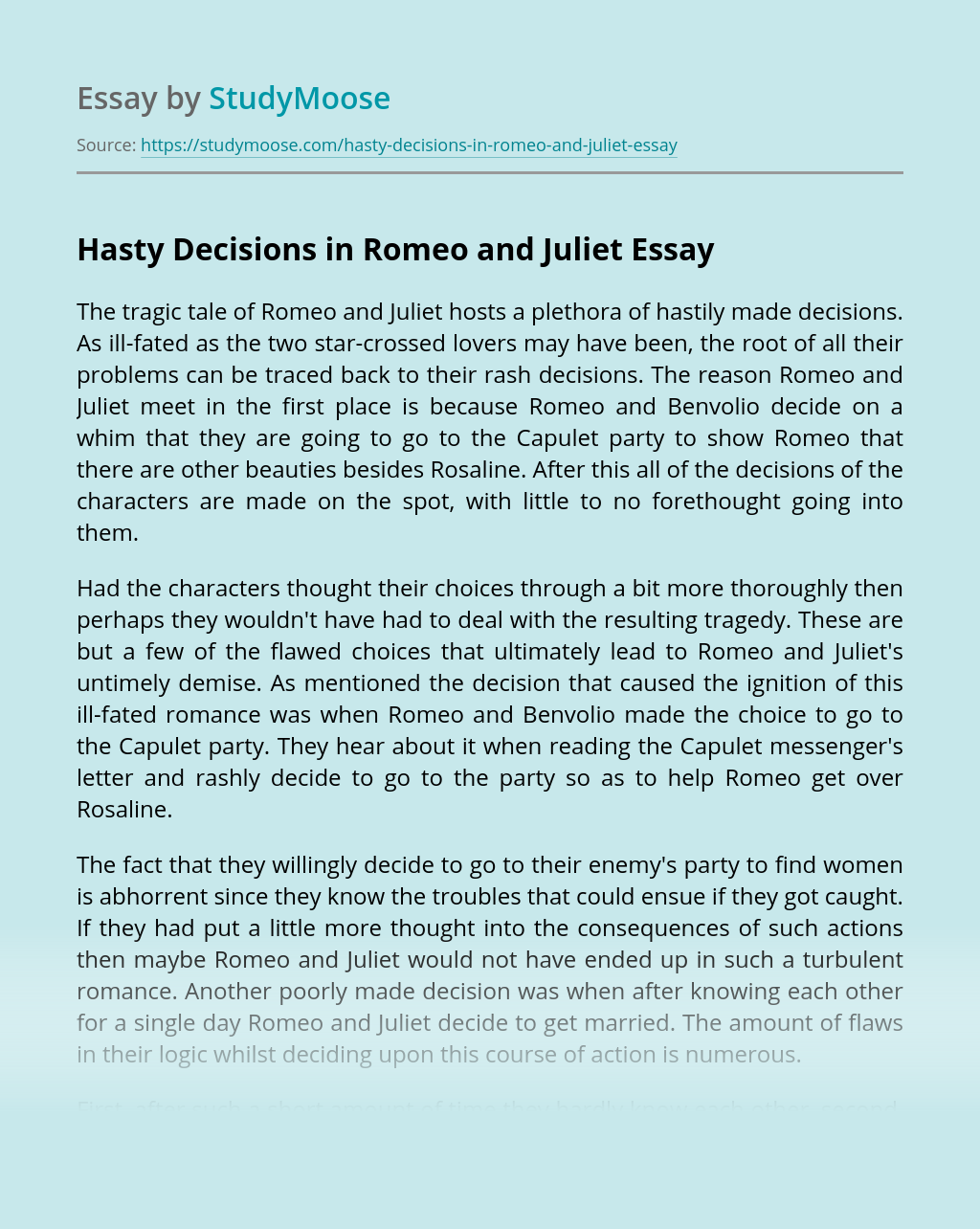