Globalizing the Cost of Capital and Capital Budgeting at AES

Question 1 Explain and comment on the capital budgeting method used historically by AES. Is there a need for change? Explain.

Question 2 If Venerus implements the suggested methodology, what will be the adjusted discount rate for the Red Oak project (USA) and the Lal Plr project (Pakistan)?

Question 3 Calculate the effect that a revision of its cost of capital will have on the Lal Plr project’s NPV. Comment on the results.

At the AES corporation capital budgeting was historically a very simple method, that was used for all projects being examined, regardless of geographical location.

Don't use plagiarized sources. Get your custom essay on
“ Globalizing the Cost of Capital and Capital Budgeting at AES ”
Get custom paper
NEW! smart matching with writer

This method entailed 4 rules which were: all recourse debt was deemed good, the economics of a given project were evaluated at an equity discount rate for the dividends from the project, all dividend flows were considered equally risky, and a 12% discount rate was used for all projects.

This method worked flawlessly when implemented in the U.S., but when it began being applied to international projects, it was giving the company unrealistic NPV values.

While some concern existed, having no alternative, they continued to use the original method. By failing to take into account increased WACC, currency risk, political risk, and sovereign risk, the company had developed projects that began failing in the early 2000’s. The mistake by the company destroyed its stock price and market capitalization, losing millions of stockholders equity in the process.

The debt structure caused significant currency risk for both the parent AES and its subsidiaries. As shown in exhibit 6, debt was denominated in USD for the subsidiaries, while they were bringing in revenues in foreign currencies.

The parent companies also lost cash flows when depreciation occurred since the money made by subsidiaries was worth substantially less, after devaluations of foreign currencies. One such example is the Argentinean peso, when it lost 40% of its value on its first day of trading as a float.

With such enormous oversights by management, and dramatic realizations of differing risk levels across markets, it’s quite apparent AES must make a change to its capital budgeting structure, if it is to survive.

Now the cost of debt must be found, by using the formula U.S. t-bill+ default spread. Both the U.S. and Pakistan projects have equal spreads of 3.47%, therefore both yield the same cost of debt. Plugging in the numbers you have, 4.5%+3.47% which is equal to 8.07%. This clearly does not make sense given the vast differences in the markets structure of each country, the political risk involved. To adjust for these factors the sovereign risk must be taken into account, which can be found in exhibit 7a.

The sovereign risk for the U.S. is as expected 0%, but for Pakistan is a staggering 9.9%. To reevaluate the cost of capital and cost of debt the sovereign risk is added to them. This results in the U.S.’s being constant and Pakistan’s cost of capital rising to 17.1% and its cost of debt rising to 17.97%. Finally with everything else calculated it’s possible to calculate the WACC, using the formula given on page 7. It consists of leveraged beta (cost of capital) + Debt to capital (cost of debt) (1-tax rate). For the U.S. WACC= 6.48%, and for Pakistan WACC= 15.93%. (Equation with numbers shown on attached page) The final step is to again further adjust the WACC according to its risk score, found on page 9 and exhibit 7a.

Using the summation of the scores multiplied by the given weights the risk score is calculated. (Shown on page 9 of the case). The U.S. risk score is assumed to be 0, since everything is in USD and the U.S. projects WACC is already accounting for the risk. The Pakistan risk premium is calculated to be 1.425, and with each point equaling 500 basis points, 1.425*500= 705bp= 7.05%. This number is directly tacked onto the existing Pakistan WACC to come out with 15.96%+7.05%= 23%, which is the final WACC calculation for the project. By taking into many more factors than previous models allowed it is clear that the WACC for both the U.S. and Pakistan projects greatly differ from the 12% standard used historically. The U.S. project suddenly looks much more favorable, while the Pakistan project is unlikely to be accepted with such a high weighted average cost of capital attached to it.

Using the cash flows given in exhibit 12 it is possible to calculate the NPV for the projects, and change the cost of capital in the Pakistan project to explore the effects. Using excel to calculate the cash flows (shown on separate sheet) at the original 12% discount rate, the 23.1% for Pakistan, and 6.45% for the U.S. it is easy to compare the differences in NPV. The original 12% discount would yield a NPV of $505.51 million, the Pakistan 23.1% discount rate would yield a $290.83 million NPV, and the 6.45% U.S. discount rate would yield a $744.08 million NPV. It is quite apparent that the Pakistan project’s NPV suffers greatly from its high WACC, coming in $214 million less than with historical model, and $453 million less than with the U.S. discount rate.

With such low NPV coming from the Lal Plr project its value could be reached by the U.S. project within about 6 years. This is like saying that due to such risky factors, including political risk, it is unreasonable to assume that the project would operate longer than 6 years in Pakistan before it’s unable to continue, unable to receive any further cash flows, and unable to reclaim assets. Due to such high discounting, and implied risk, it is probably not in the company’s best interest to pursue projects in Pakistan, and to look for projects with less risk and lower WACC’s.

Globalizing the Cost of Capital and Capital Budgeting at AES. (2017, Feb 24). Retrieved from https://studymoose.com/globalizing-the-cost-of-capital-and-capital-budgeting-at-aes-essay 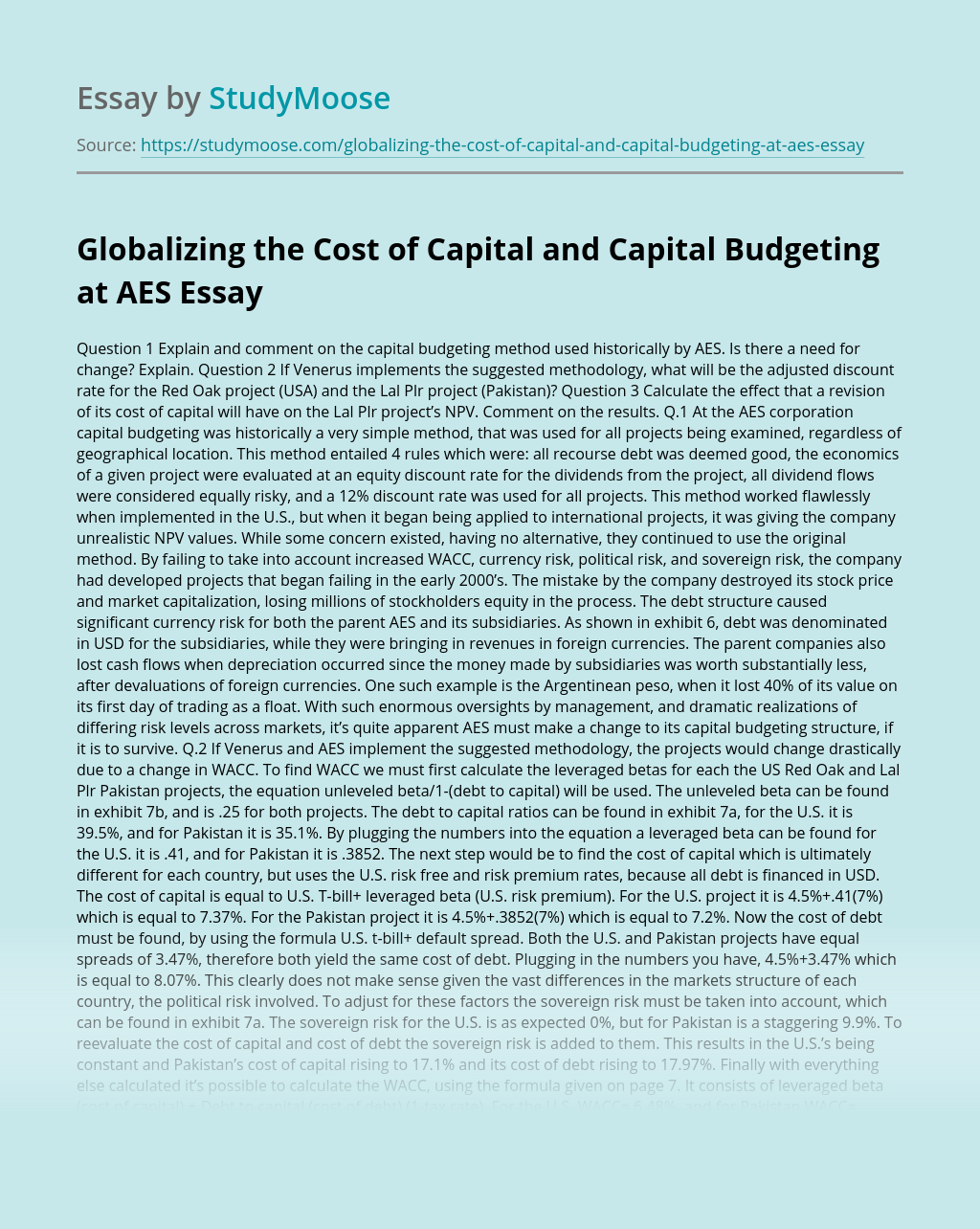