At the age of nineteen, Canterbury experienced severe back pain while working for FBI in Washington. After the pain failed to end with medications from two practitioners, Canterbury decided to consult a neurosurgeon, Dr. Spence (Law & Bioethics, 2009). Following this consultation, an X-ray was conducted but no solution was found for the problem. Based on this, Dr. Spence recommended for a surgical operation in a move to identify and thus treat disease causing Canterbury’s back ache. However, the doctor did not inform the patient of the potential risk involved in the surgery.

On the other hand, Canterbury never asked of such risks.

Nevertheless, in the process of the operation, Dr. Spence discovered that the spinal cord of the patient was swollen. This forced him to engage in taking medically safe measures to relieve the painful pressure brought by such swellings. On the contrary, while recovering from the effects of the surgery, Canterbury slipped off the bed, rendering him almost paralyzed.

Due to this reason, Dr. Spence was prompted to conduct another surgery, a factor which significantly improved the patient’s condition. However, Canterbury was unable to move without using crashes. Following his failure to full recovery, the plaintiff filed a case accusing Dr.

Spence of not formally informing him of the potential health risks that could emerge from the surgical treatment of the back pain (Law & Bioethics, 2009). In addition, the plaintiff also sued the hospital for failing to put patient bed rail to eliminate patients from falling off their beds.

Canterbury also accused the hospital of not providing a nurse during his time of fall (Law & Bioethics, 2009). This had the implication that his fall from bed was due to negligence of the hospital to attend Canterbury after the surgery. Such are reflective of the fact that surgically operated patients must be given ultimate attention by hospital nurses.

On the other hand, the defendant claimed that the defendant was of underage and that the proposed surgical procedures were never expected to go that far. Issues in the case According to the provisions of the law, the underlying issue in the Canterbury v. Spence case was on whether a medical physician must inform any potential patient of the reasonable risks associated or involved in the professional treatment process. Another issue was whether or not a patient must be given immediate nurse assistance during their hospital bed recovery to mitigate chances of accidental injuries by patients (Law & Bioethics, 2009).

Just to be appreciated is the fact that, according to the code of conduct by physicians, disclosure of the potential risks involved in procedural treatment is instrumental in enhancing the decision making process by the patient of their relatives. The judges argued that, as per the fundamentals of the American constitution, everybody who is of adult age and mentally competent must be entailed to the right of determining what should be done to their body (Law & Bioethics, 2009).

According to them, the ultimate consent in conducting any operation or treatment must be based on an informed choice by the adult victim. Still claimed is that the average patient of little of no intellect in understanding or appreciating medical treatment proceedings. Due to this reason, the patients are only left with the trust of their physicians in ensuring that they make an intelligent decision (Law & Bioethics, 2009). This had the implication that physicians have a legal responsibility to ensure that patients have adequate understanding of the risks and alternatives to the proposed treatment.

This is because; despite the fact that physicians are supposed to treat patients skillfully, their diagnosis proficiency is not the ultimate measure of their responsibility. However, the court provided two major exceptions on the need for informing a patient of the potential risks involved in the medical procedure as well as alternative treatment solutions to the problem. The first condition is when the involved patient is unconscious (Law & Bioethics, 2009).

This has the direct implication that failure by the practitioner to engage in proposed medical treatment entail much risk than harm such can cause to the victim. The second exception to informing a particular patient of the risk and possible alternatives is when the wellbeing of the victim is likely to be compromised (Law & Bioethics, 2009). It is worth noting here that some individual in the community such as underage are prone to emotional and psychological distress following disclosure of medical procedures, a factor that can negate the effectiveness of the treatment process.

Case deposition Based on its argument, the United States Court of Appeals for the District of Columbia Circuit reversed the case in favor of Canterbury, remanding for a new trial by the district court (Law & Bioethics, 2009). 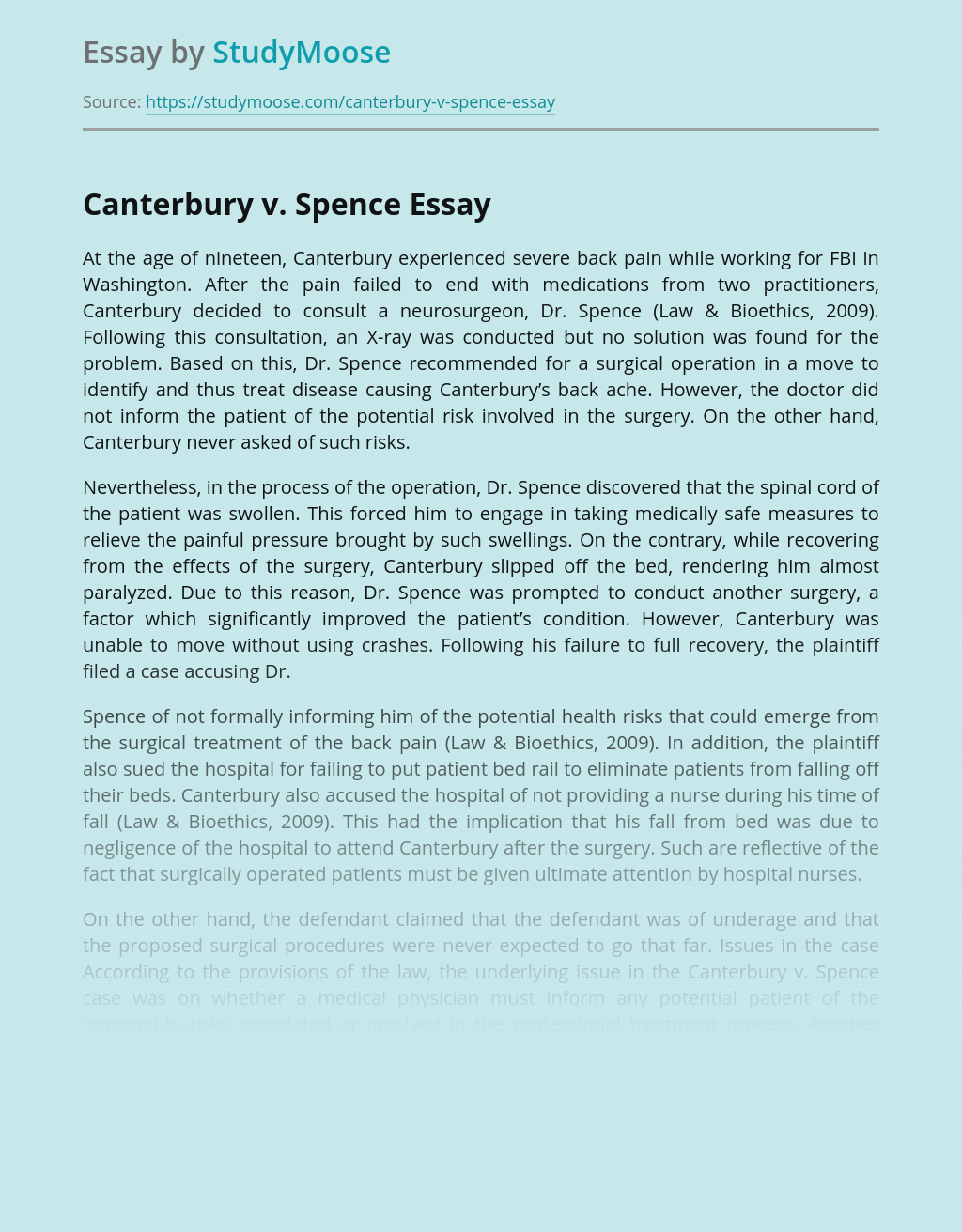 Don’t waste time
Get a verified expert to help you with Canterbury and Spence Issue
Hire verified expert
$35.80 for a 2-page paper
Stay Safe, Stay Original