In 2017 the United States Department of Health and Human Services declared a public health emergency to address the current opioid crisis (Public Affairs. (n.d.). What is the U.S. Opioid Epidemic?). Opioids have naturally existed for over thousands of years and are known to be one of the most addictive substances on the planet. In the late 90s pharmaceutical companies championed opioid pills as a form of pain management. They also declared that they were non-addictive and so there was an increase in written prescriptions for opioid painkillers.

Don't use plagiarized sources. Get your custom essay on
“ Cannabidiol As Medicated Assisted Treatment ”
Get custom paper
NEW! smart matching with writer

Today the ” HHS estimates that roughly 11.4 million Americans misuse prescription opioids annually.” Even more frightening the rate of opioid deaths is increasing at an alarming rate- “with over 42,000 in 2017 alone” (Public Affairs. (n.d.). What is the U.S. Opioid Epidemic?). Through my experience at my internship at the Hope Center and my personal experiences, I have quickly come to realize how pervasive the opioid crisis truly is. Opioid addiction does not discriminate- everyone is being affected.

In an effort to combat and treat opioid addiction the medical community designed a treatment modality called medicated assisted treatment or MAT for short to be used along with addiction counseling. Unfortunately, due to stigma, there is misinformation surrounding medicated assisted treatment. Most people believe that using a MAT is replacing one drug with another. That is incorrect. The purpose of “MAT medications like methadone, buprenorphine, and naltrexone is to relieve withdrawal symptoms and psychological cravings from chemical imbalances in the body”- they can be used successfully for years to combat opioid abuse and even alcoholism.

The current MAT choices while effective are not perfect they require you to visit a clinic at the same time every day of your life or until you decide to taper off the medication. The dose routinely needs to be adjusted for adequate levels otherwise opioid withdrawal symptoms will return.

I interviewed several counselors at my internship who asked to remain anonymous, about MAT and they were well aware of the complications concerning the current medicated assisted treatment options. Some steer their clients toward medicated assisted treatment because they think anything is better than relapsing. Others discuss with their clients that while MAT is helpful for stabilization it should not be a long-term treatment. Each counselor, and some more than others, due to their own recovery recognize that the current treatment modalities are effective but come with their own challenges and potential for abuse. This paper aims to examine the current research around using cannabis specifically cannabidiol or CBD as a potential treatment for the opioid epidemic.

The concept of using cannabis as a medical treatment is not new. In fact, the first medical use dates all the way back to ancient China in 2738 B.C. (“A Brief History Of Medical Cannabis”, 2018) but what we know today is that cannabis is infinitely more complicated than was previously thought. Research that has been conducted outlines that there are potentially thousands of different compounds in cannabis that are not found in other plants. These chemical compounds cause different effects. The two most researched compounds are currently Cannabidiol or CBD and Tetrahydrocannabinol known as THC. Tetrahydrocannabinol is the psychoactive component in cannabis that creates a high feeling. It has addictive qualities and most likely would not be suitable as a medicated assisted treatment for opioid use disorder (Ren, Y., Whittard, J., Higuera-Matas, A., Morris, C. V., & Hurd, Y. L. (2009)). Cannabidiol, on the other hand, has been studied in several experiments and shows promising results for combating heroin-seeking behavior and relapse.

In an experiment using cannabidiol to treat heroin-addicted male lab rats, the findings indicated that the maintenance of heroin-seeking behavior was not affected by CBD and it failed to alter the physical activity of lever pressing for heroin delivery. The findings did indicate that cannabidiol specifically affects heroin-seeking behavior that is promoted by a conditioned cue. Eventually, there was a significant decrease in pressing the active heroin lever but not the inactive lever during the drug-seeking behavior period- but the decrease in behavior was still seen two weeks after the CBD treatment (Ren Y et al., 2009). The results of this study demonstrate that cannabidiol has the potential to regulate the neural mechanisms that are relevant to drug craving behaviors. This is promising data because it adds practical support to the idea that cannabidiol along with counseling may be able to change behavior and prevent relapse drug-seeking behavior.

The results that Ren, Y et al., 2009). found may raise some eyebrows about using an illegal substance to treat another drug addiction but it is important to distinguish the difference between CBD and THC and that using cannabis as a MAT would be specific to using CBD or cannabidiol not THC as a treatment, because cannabidiol is non-psychoactive and findings in a separate study called Early Phase in the Development of Cannabidiol as a Treatment for Addiction: Opioid Relapse Takes Initial Center Stage, by Hurd, Y. L et al., 2015). Found that CBD is not rewarding on its own and that means it has low abuse potential. Furthermore, this research supports previous evidence because the data suggests that humans have an endocannabinoid system that is a treatment target for addiction. Data shows that the endocannabinoid receptors overlap with opioid receptors. In this study, they also found that CBD did show the ability to potentially curb the use of alcohol and cocaine. Cannabidiol showed a positive effect on the dopamine receptors in the brain which may also be why CBD is marketed to help patients with anxiety and depression. Most importantly, there was supporting evidence that cannabidiol may decrease withdrawal symptoms and can help reduce drug cravings in humans with opioid dependence.

There is significant potential around cannabidiol has medicine in the form of MAT because it is neither an opioid antagonist or a synthetic opioid and won’t cause painful withdrawal symptoms if the dosage is not adjusted correctly. Additionally, studies have shown that cannabidiol shows the most promise combating intoxication of not just opioid use but cocaine, and other amphetamines as well. Meaning that it may potentially combat the level of intoxication when using other drugs and dissuade there usage. Overall, the finding that cannabidiol can block the negative effects of withdrawal and relapse is what gives it support as a form as of MAT (Prudhomme, M., Cata, R., & Jutras-Aswad, D., 2015). because that is exactly what the current MAT options like methadone, buprenorphine, and naltrexone are meant to do but as many clients and even counselors expressed to me their abuse potential is much higher.

Cannabidiol as a form of medicated assisted treatment for opioid use disorder does not come without challenges though. Cannabidiol is a component of cannabis and walks a fine line in federal classification between being an illicit drug and hemp product and therefore perfectly legal. The question of legality creates several issues. It makes it incredibly difficult for researchers to conduct experiments to derive what the practical benefits of cannabidiol are and how they can be used to better society, as well as what potential dangers of its usage may be. The legality of cannabis also means it is not widely available even if it can help with certain ailments and what is particularly damaging is that the legal status of cannabis has created a heavy stigma around using cannabidiol as a medicine as well.

Legality is such a large barrier because the lack of plentiful experiments has lead to conflicting information. Since cannabis and all the workings of its components like cannabidiol are not fully understood. One study found that CBD may actually increase the rate of entry of certain drugs to the brain which obviously could be troublesome (Prudhomme, M. et al., 2015). The conflicting information also surrounds cannabis as a form of pain management much like opioids are used for, but there are mixed findings.

Some studies present evidence that cannabis is not an effective medicine for pain management (Campbell, G., Hall, W. D., Peacock, A., Lintzeris, N., Bruno, R., Larance, B., … Degenhardt, L. (2018). While others express that cannabidiol or CBD specifically has been reported to help manage chronic pain (Prudhomme, M et al., 2015) and if that can be validated then it is promising because according to other research chronic pain is a frequently cited source that is linked to opioid abuse (Jones, J. D., Vogelman, J. S., Luba, R., Mumtaz, M., & Comer, S. D. (2017).

While research has presented evidence that CBD has various uses and has some success treating mental illness such as addiction, anxiety, and depression is meaningful because a large number of individuals who enter the Hope Center also have untreated mental illness and they are most commonly mood disorders like depression and anxiety. On the other hand, a few of the counselors and clients in recovery expressed that if they were to take up cannabis again it would most likely lead them back to opioid abuse. Or that it would not be enough of a buzz to satisfy their craving and therefore could not work as a MAT.

While the idea of cannabis as medicine is not new the idea of using it to combat opioid use disorders is and the biggest take away from my personal experiences and the research is that there is some evidence to support CBD may be effective in treating withdrawal and preventing relapse by helping to curb cravings. Out of all the information I took in what struck me as the key factor is that it must be cannabidiol that is used.

There is a real capacity to use cannabidiol to treat opioid use disorder but more studies must be done. There is not enough information based on human experiments with tightly controlled conditions to fully explore the potential of cannabidiol and therapy. In another vein, it would be important to study if using CBD for chronic pain could be effective in an effort to curb opioid prescriptions for pain. With the legalization of cannabis increasing in the United States it is important that we explore the possibility of medical benefits and think of new ways to possibly combat the opioid crisis.

A Brief History Of Medical Cannabis. (2018). Retrieved from

Public Affairs. (n.d.). What is the U.S. Opioid Epidemic? Retrieved from 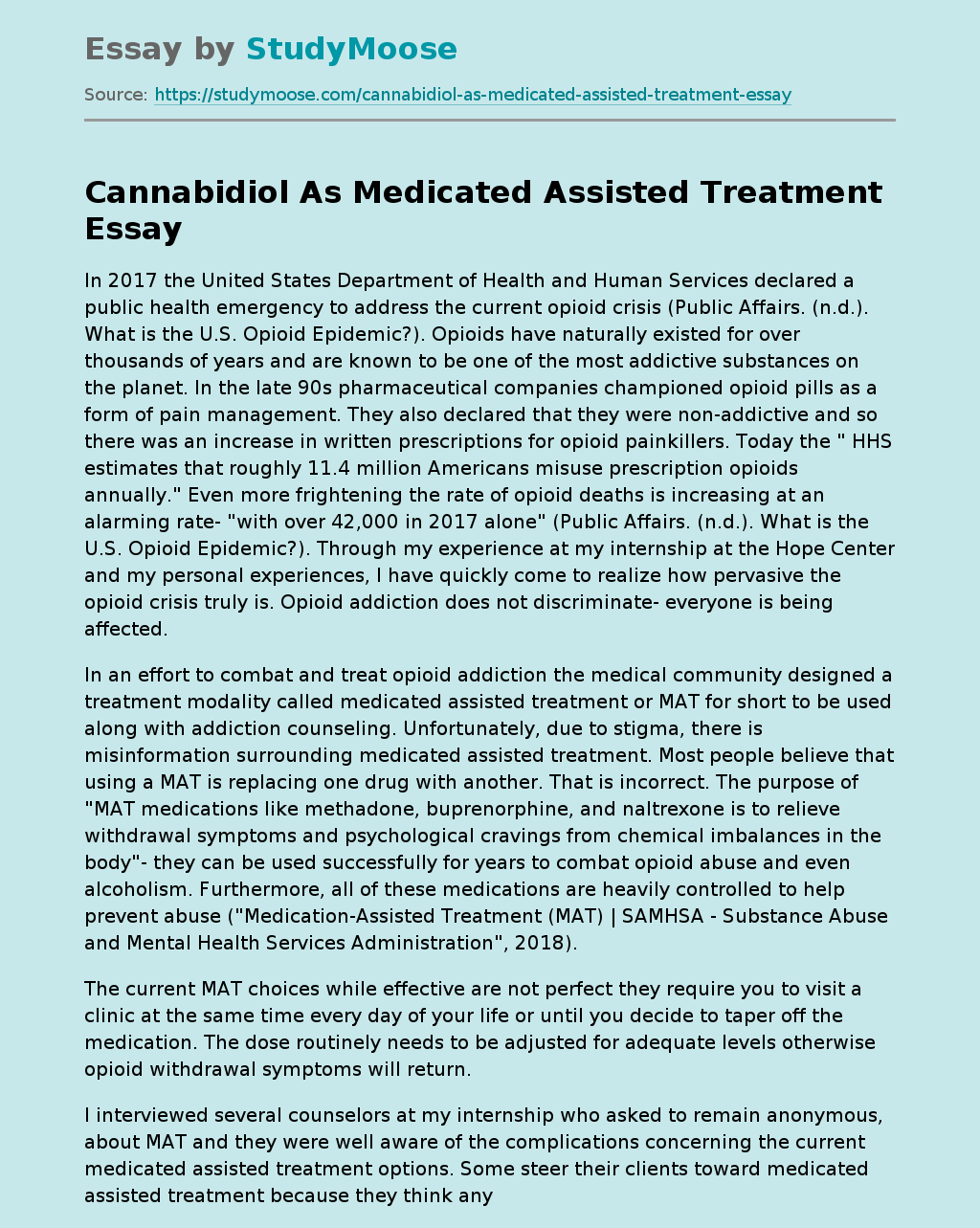