“Suffering builds character.” In order for it to do that we have to have the right attitude and response. Building your character from suffering can help you in the future when you may also suffer. Patria had given birth to a her dead baby. She had been carrying around something dead inside of her. After her loss, she had felt a strange vacancy. She felt empty. Before marrying Pedrito she had a religious calling, to join the convent. She worried that the death of her child was punishment for turning her back on it.

Don't use plagiarized sources. Get your custom essay on
“ Building Character ”
Get custom paper
NEW! smart matching with writer

Losing her baby made Patria and better person but it also changed her whole belief. It made her a better person because she finally felt that hatred that Minerva felt for Trujillo and understood it. Her family had not been hurt personally by Trujillo, just like before she lost her baby, Jesus had not taken anything from her, but others have been suffering great losses because of Trujillo.

All the men in the Perozo family were dead, a man and wife were murdered in their bed, and thousands of Haitians were killed at the border, making the river run red. Patria hadn’t been thinking of all the suffering Trujillo had been inflicting on people and their families. There’s also another saying, “You can’t understand what you have not experienced.” I think the hurt that Patria had experienced opened her eyes to see and feel things she couldn’t, this builds her character because she gains empathy towards others.

She can understand and feel things that others feel. Although, it doesn’t always have to be you who suffers to build your character. Anything can build your character, like Minerva. When she learns about the suffering of Sinita and her family, and others like her who have suffered from Trujillo, she gains determination to make things better and fight for freedom. Her character shows she is brave, courageous, and strong. After her suffering, Patria loses her faith in Jesus because he allows everyone to suffer. Patria had been keeping the loss of her faith a secret. Patria is known for and seen as a model Catholic wife and mother. Her character shows she is reliable, responsible, and respected. She pushed aside the pain she felt from the loss of her baby to be there for her husband, Pedrito, who was also suffering. Selflessness is also a characteristic built. When we suffer it builds perseverance in us. Allowing us to continue to do what we need to do in the face of pain. Patria realized that she has to put aside her own grief to rescue him from his. She moved back home with her husband and kids to resume her duties, putting on good face over a sore heart, she says. Slowly she felt herself coming back from the dead. 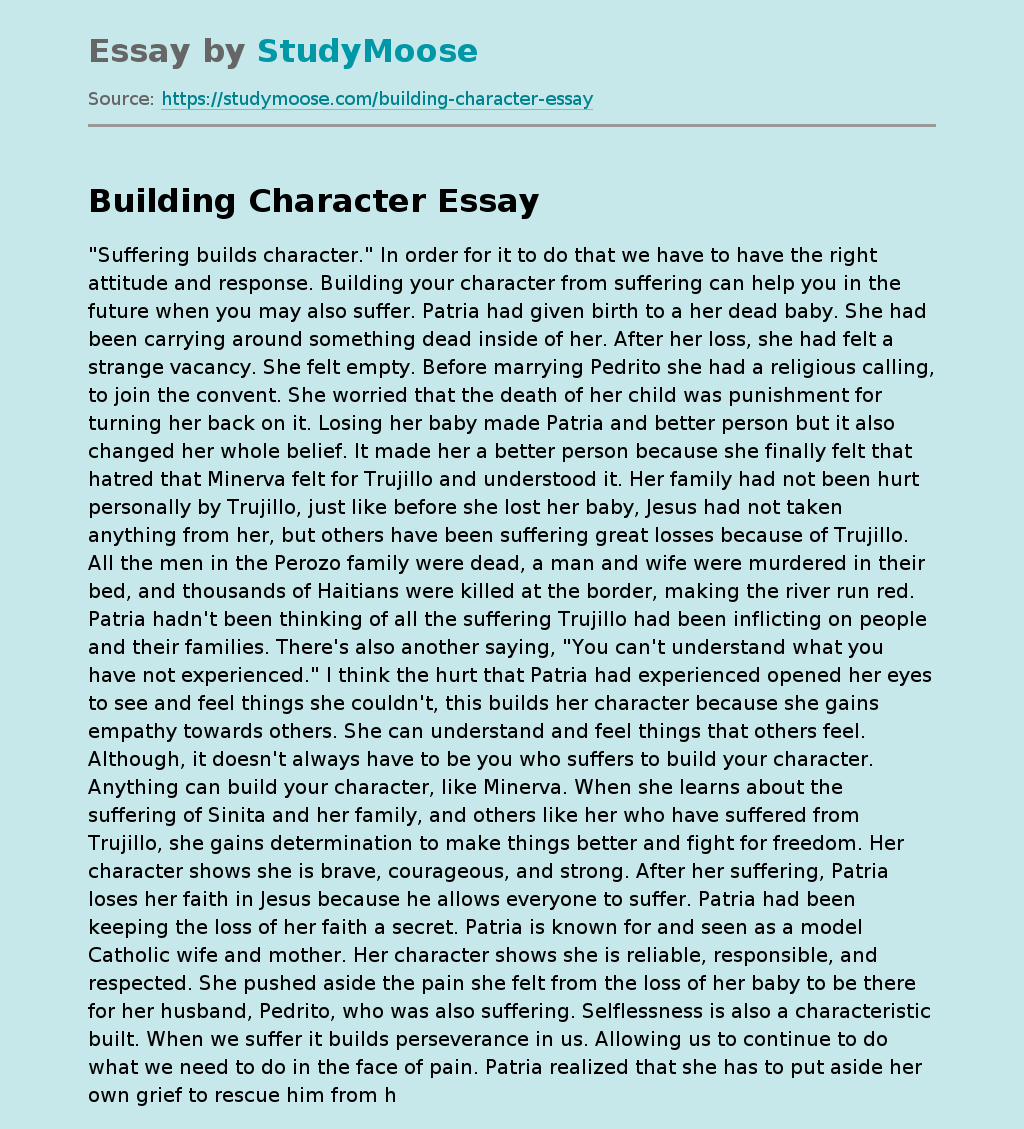