Education:
Bienvenido Lumbera received his Litt.B. and M.A. degrees from the University of Santo Tomas in 1950.
Ph.D. in Comparative Literature from Indiana University in 1968.

Bienvenido Lumbera was also appointed visiting professor of Philippine Studies at Osaka University of Foreign Studies in Japan from 1985 to 1988 and the very first Asian Scholar in Residence at the University of Hawaii at Manoa.

Don't use plagiarized sources.
Get Your Custom Essay on Buenvenido Lumbera Just from $13,9/Page

In such ways, Bienvenido Lumbera contributed to the downfall of Marcos although he was in Japan during the 1986 Edsa uprising, teaching at the Osaka University of Foreign Studies.

Bienvenido Lumbera is also the founding and current chairperson of the Board of Trustees of the multi-awarded media group Kodao Productions and a member of the Concerned Artists of the Philippines and the Bagong Alyansang Makabayan.

Literary Reputation:
Bienvenido Lumbera is now widely acknowledge as one of the pillars of contemporary Philippine Literature, Cultural Studies and Film, having written and edited numerous books on literary history, literary criticism and film.

Bienvenido Lumbera also received several awards citing his contribution to Philippine Letters, most notably the 1975 Palanca Award for Literature; the 1993 Magsaysay Award for Journalism Literature, and Creative Communication Arts; several National Book Awards from the Manila Critics Circle; the 1998 Philippine Centennial Literary Prize for Drama; and the 1999 Cultural Center of the Philippines Centennial Honors for the Arts.

For a time, Bienvenido Lumbera also served as President of the Alliance of Concerned Teachers (ACT), a National Organization of more than 40,000 teachers and employees in the education sector.

Carlos Palanca Memorial Award for Literature
Visiting Professorship, Osaka University of Foreign Studies Professor Emeritus, University of the Philippines
Philippine Centennial Literary Prize for Drama Cultural Center of the Philippines Centennial Honors for the Arts 1st Asian scholar-in-residence at the University of Hawaii at Manoa *As a poet, he introduced to Tagalog literature what is now known as Bagay poetry, a landmark aesthetic tendency that has helped to change the vernacular poetic tradition. He is the author of the following works: 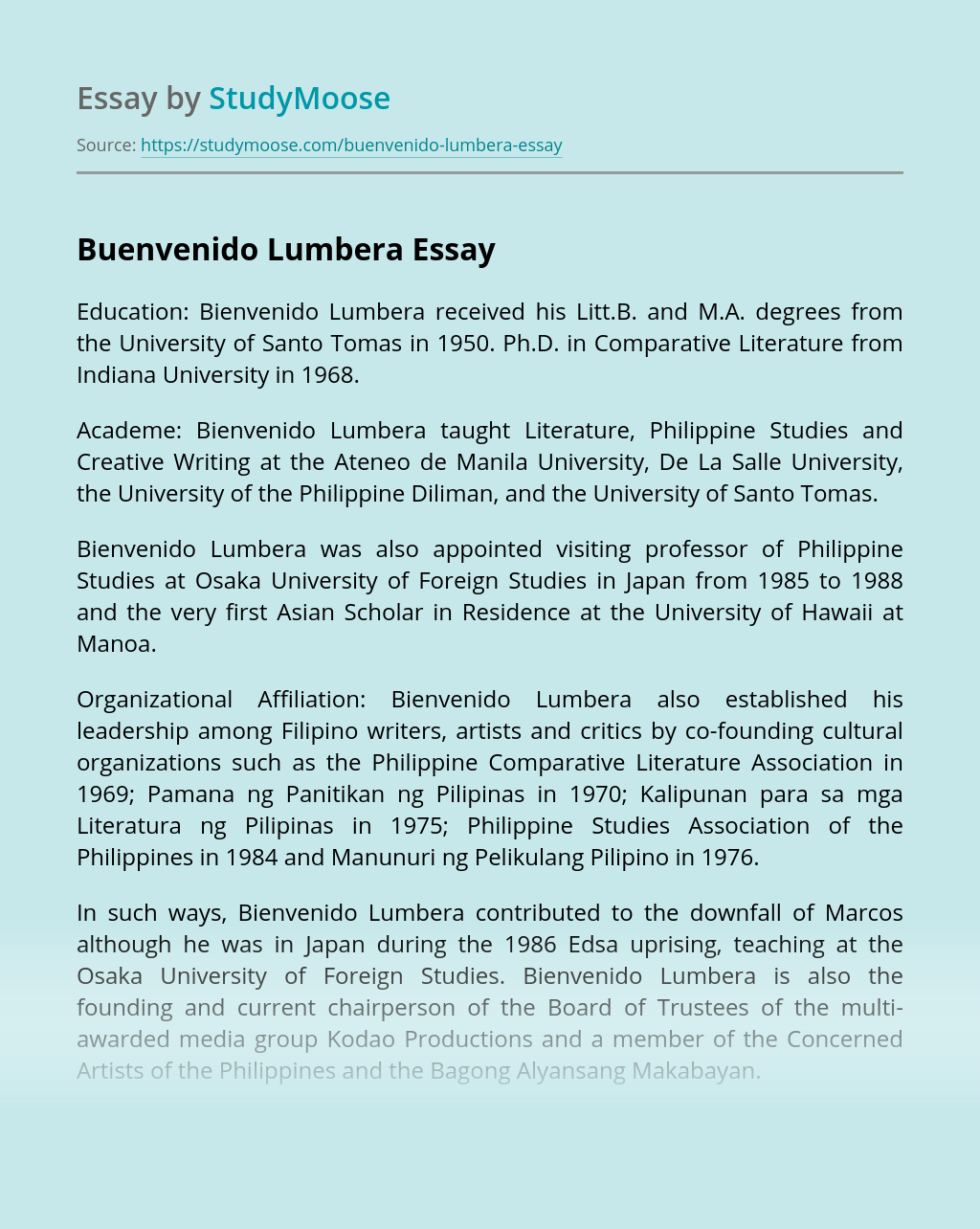 How does Robert Louis Stevenson explore the duality of human nature in Dr Jekyll and Mr Hyde?

View sample
Narration and Tone in The Tell Tale Heart, The Ghost in the Mill, and Cannibalism in the Cars

If fear, quizzical characters, and death all have something in common, it is that they are all present in each of the following short stories: Edgar Allan Poe’s “The Tell Tale Heart”, Harriet Beecher Stowe’s “The Ghost in the Mill”, and Samuel Clemens’ “Cannibalism in the Cars”. Each story has a unique and thrilling plot,... VIEW ESSAY

With that said, it is important to remember that all literary works cannot always be easily classified into a single genre. Moreover, literary works which might be classified as belonging to one genre might possess many qualities more typical of other genres. For example, Shakespeare’s Macbeth is classified as drama, but in many respects takes... VIEW ESSAY

In an essay about his novel “Lord of the Flies”, William Golding wrote: “The boys try to construct a civilisation on the island; but it breaks down in blood and terror because the boys are suffering from the terrible disease of being human”. Discuss your own response to the novel in light of this statement.... VIEW ESSAY

“We’ve all had to rewrite the scripts of our lives the last few weeks.” This quote best represents the theme of change. In literature, a theme is defined as a recurring element which helps the audience receive a deeper meaning, a deeper understanding about the text and most importantly about the fundamental ideas in life.... VIEW ESSAY