Advantages and disadvantages of the civil war

In 1861, when the Civil War broke out, the Confederacy and the Union both had numerous advantages and disadvantages and there were multiple women and slaves that contributed to the war. To begin with, the Confederacy had its significant advantages that helped it push through the war, one of which was its strong leaders. Many believed “Stonewall” Jackson and Robert E. Lee were some of the best officers even before the war. Also, they had the advantage of fighting on their own soil.

Turn in your highest-quality paper
Get a qualified writer to help you with
“ Advantages and disadvantages of the civil war ”
Get high-quality paper
NEW! AI matching with writer

They knew the terrain better that of their counterparts. A psychological aspect could be that fighting for their land, for their families, could have been the driving force or motivation. Moreover, they have longer coast lines which increased the travel time and decreased the chances of blockade or capturing of ports and major cities.

On the other hand, the Confederacy did have several disadvantages as well. First, they were not recognized by Europe at all which limited their foreign aid.

The Confederacy also had minimal factory production and industry. At the beginning of the war, the Confederacy had only one-ninth the industrial capacity of the Union. But that statistic was misleading. In 1860, the North manufactured 97 percent of the country’s firearms, 96 percent of its railroad locomotives, 94 percent of its cloth, 93 percent of its pig iron, and over 90 percent of its boots and shoes. There was not even one rifleworks in the entire South.

The railroad system that the Union had was far more sophisticated than that of the Confederacy, having over ten thousand more miles of railroad tracks that were, in itself, more modern.

Due to the large amounts of manufacturing businesses and the railroad system to move the products, the Union, unlike the Confederacy, could produce and ship weapons, clothing, and food at a much more efficient rate than their counterparts. Also, because they were a newly founded “sovereign state”, the Confederacy did not have a professional, organized standing army and navy. The army and navy of the Federal United States were already organized and ready for war. Since, The Union had a naval advantage and the confederacy had Long Coastlines that were hard to defend,the union could block the Confederate’s ports for supplies. Furthermore, the economy of the Confederacy was destroyed by the Union.

Second, the Union also had its many advantages as well as some disadvantages. One of the North’s significant advantages in fighting the war was that the industrial, urbanized Northern states held a significant edge in the population and manpower. The North had over twenty-two million people whereas the South had just over nine million (three and a half million of whom were blacks). Additionally, the Union had already an more experienced government since it was around for some years, when on the contrary, the Confederate government was fresh and new. Also, as mentioned before the Union was far more industrialized with its vast networks of factories, railroads, and ships which exceed any amount of industrialization in the south.

This aspect gave the Union of being able to transport supplies and equipment faster and finance the war much better than the Confederacy. Finally, as it was also mentioned previously, the Union did have a large navy that allowed them to block major southern ports. During the horrible four years of the Civil War, women who did not own property, did not have the right to vote, or did not have many civil liberties came together in support of the war efforts. Women were so eager to help that they hid their identity by dressing as men, taking up masculine names, and took up arms of their own. They cared for sick and dying soldiers, risked their lives to gather information as spies, cooked, cleaned and care for children. The tenacity and love with which these women served their country was astounding, and yet often overlooked.

About 3,000 women served as Union army nurses. Dorthea Dix was one women who was acknowledged for being the Nation’s first superintendent of women nurses. Clara Barton was recognized for being the first women to work in the U.S. Patent Office and was given the name “Angel of the Battlefield.” Sally Tompkins was a Confederate army nurse commissioned as captain because she performed her hospital duties so heroically. Finally, Belle Boyd was honored for being a brave Confederate nurse and spy.

After President Lincoln presented the Emancipation proclamation, which held a section for the enlistment of African Americans into the Union Army, African American men rushed to enlist. This time they were accepted into all-black units. The first of these was the Fifty-fourth Massachusetts Colored Regiment, led by white officer Robert Gould Shaw. Their heroism in combat put to rest worries over the willingness of black soldiers to fight.

Soon other regiments were being formed, and in May 1863 the War Department established the Bureau of Colored Troops. Black recruiters, many of them abolitionists such as Frederick Douglass, Henry Highland Garnet, and Mary Ann Shadd Cary, brought in troops from throughout the North. Douglass proclaimed, “I urge you to fly to arms and smite with death the power that would bury the government and your liberty in the same hopeless grave.”

Others, such as Harriet Tubman, recruited in the South. On March 6, 1863, the Secretary of War was informed that “seven hundred and fifty blacks who were waiting for an opportunity to join the Union Army had been rescued from slavery under the leadership of Harriet Ross Tubman….” By the end of the war more than 186,000 black soldiers had joined the Union army; 93,000 from the Confederate states, 40,000 from the border slave states, and 53,000 from the free states.

They participated in about 500 Civil War battles and skirmishes. Although they were treated unequally they continued to volunteer. For example, white privates in the Union army were paid $13 monthly with and extra $3.50 clothes allowance, while black privates in the Union were only paid $10 monthly WITHOUT an extra clothes allowance. It wasn’t until 1864 that Congress equalized the pay for the black and white soldiers. Also, the mortality rate of blacks were higher than that of whites due to the fact that they were assigned to labor duty in the germ-ridden garrisons where they were likely to ctach typhoid, pneumonia, malaria, or other diseases.

Advantages and disadvantages of the civil war. (2016, Apr 21). Retrieved from https://studymoose.com/advantages-and-disadvantages-of-the-civil-war-essay 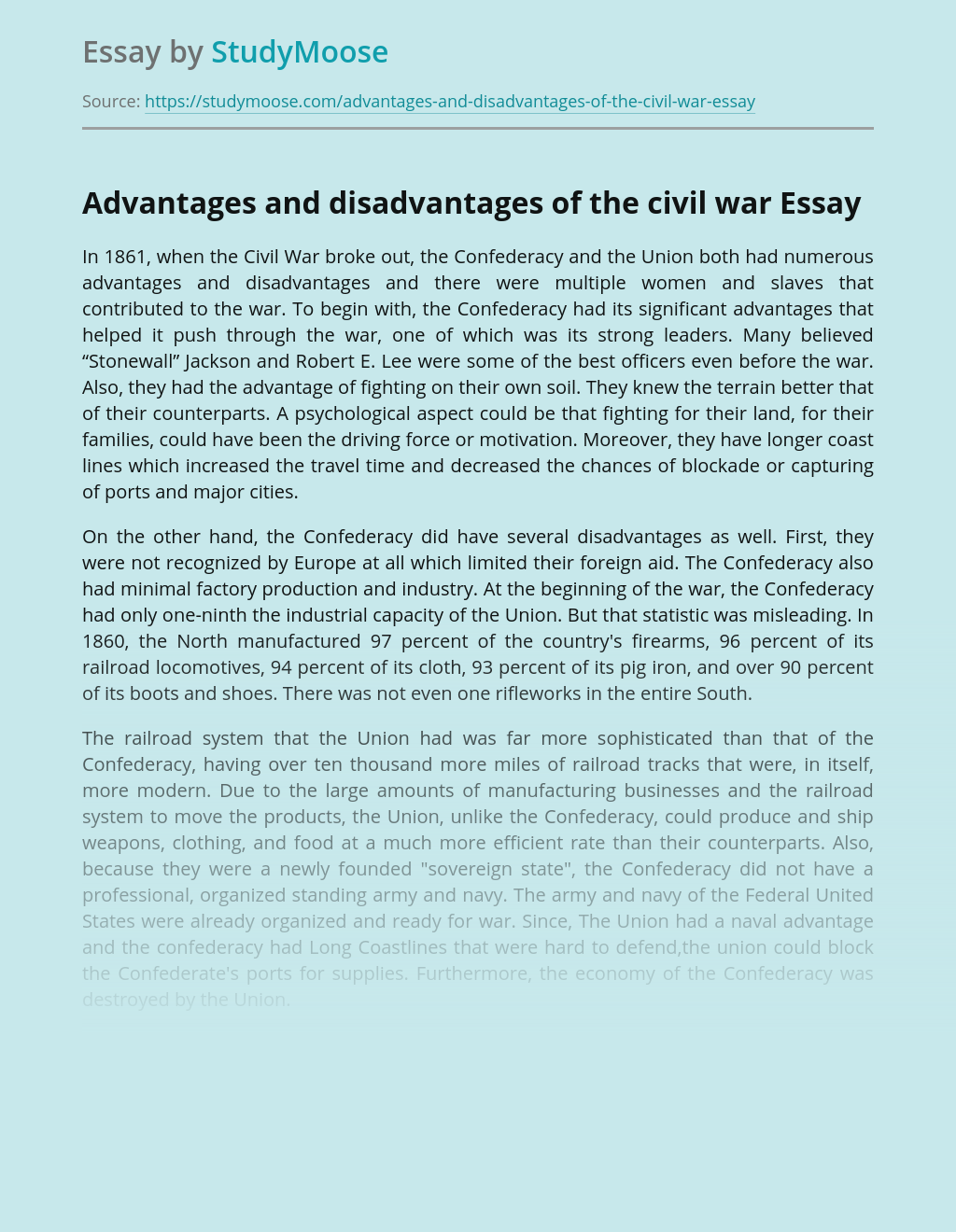 Turn in your highest-quality paper
Get a qualified writer to help you with
“ Advantages and disadvantages of the civil war ”
Get high-quality paper
Helping students since 2015
Stay Safe, Stay Original