Buck Character in Call of the Wild Novel

Throughout the novel The Call of the Wild, we follow a dog named Buck through his journey through the Klondike. We experience a transformation in him, as he adapts to the cold, harsh land where he is forced to toil in the snow, just to help men find a shiny metal. Buck seems to almost transform into a different dog by the end of the book.

Don't use plagiarized sources. Get your custom essay on
“ Buck Character in Call of the Wild Novel ”
Get custom paper
NEW! smart matching with writer

In this essay, I will go over what Buck was like, how and why he was forced to adapt to his new environment, and what he changed into.

When we first met up with Buck, he lived in the Santa Clara Valley, on Judge Miller’s property. He was the ruler of his domain, uncontested by any other local dogs. he was a mix between a St. Bernard and a Scotch Shepherd dog. He weighed one hundred and forty pounds, and he carried every one with utmost pride.

Buck had everything he could want. Little did he know, he would soon have it all taken away from him. One night, while the judge was away at a raisin grower’s committee meeting, the gardener, Manuel, took Buck away from his home. Buck was then sold, and thrown in a baggage car. This would be the beginning of a new, cruel life for Buck.

On his ride to wherever he was going, Buck’s pride was severely damaged, if not completely wiped out by men who used tools to restrain him.

No matter how many times Buck tried to lunge, he would just be choked into submission at the end. When Buck arrived at his destination, there was snow everywhere, not to mention the masses of Husky and wolf dogs. Buck was thrown into a pen with a man who had a club. This is where Buck would learn one of the two most important laws that a dog could know in the Klondike. The law of club is quite simple, if there is a man with a club, a dog would be better off not to challenge that man. Buck learned this law after he was beaten half to death by the man who had the club. no matter what he tried, he just couldn’t win. Buck was sold off to a man who put him in a harness connected to many other dogs. Buck was bad at first, but eventually, he learned the way of trace and trail. Buck had to learn many things if he was to survive in this frigid land. He had to learn to sleep under the snow, and to eat his food as fast as possible so as not to have it stolen.

At about this point in the book, we see Buck start to go through a metamorphosis of sorts. He transforms from a house dog to a more primitive, savage version of his former self. It was as if hundreds of years of knowledge, learned by his ancestors, were dug up and brought out. Buck proceeded to lose all the fat in his body and replace it with muscle. Buck was no longer Judge Miller’s pet. He was a machine of survival and triumph. Most Southland dogs like him ended up dead because of their inability to conform. Buck was born to lead the team, but one dog would do everything possible to try and keep him down. This dog’s name was Spitz. Spitz was a white wolf dog who was a proven champion in confrontation and was as crafty as they come. It was clear that he and Buck would not work well together. When dogs have confrontation in the Klondike, only one survives.

This was because of a law called fang. The law of Fang is such that, when two dogs fight and one is knocked to the ground, that is it. The rest of the spectators will instantly pounce on the downed dog and make quick work of it. All of these unspoken rules had turned Buck into the Best dog to ever roam the Klondike. Buck did eventually fight Spitz and send him to his death. After all of the transformations and cruelty he had been through, you would think that Buck would never be able to trust another human. He was being starved to death by a gold seeking group who had not brought enough food for the dogs. When Buck could finally not move another step, a man from the group started to beat Buck. As the blows grew less and less painful, and he was fading farther and farther, Buck knew he was dying. While Buck was being beaten, a man named John Thornton came forth and took Buck from his attacker.

The man nursed Buck back to health, and from that day forward, Buck lived for that man. Buck loved him with all his being. After being with this man for quite some time, Buck started to hear a call from far away. He started paying more and more attention to this call. He went out for days at a time searching for it’s source. This call was the call of the wild. He had a will to go off and be with other dogs. He felt the urge to be free from man and catch his own food. One day, Buck finally left for good. He was excepted by a pack of wolves who treated him like a wolf himself. And so the transformation was complete. Buck had changed from a dog, to a beast of nature.

Buck Character in Call of the Wild Novel. (2020, Jun 01). Retrieved from http://studymoose.com/buck-character-in-call-of-the-wild-novel-essay 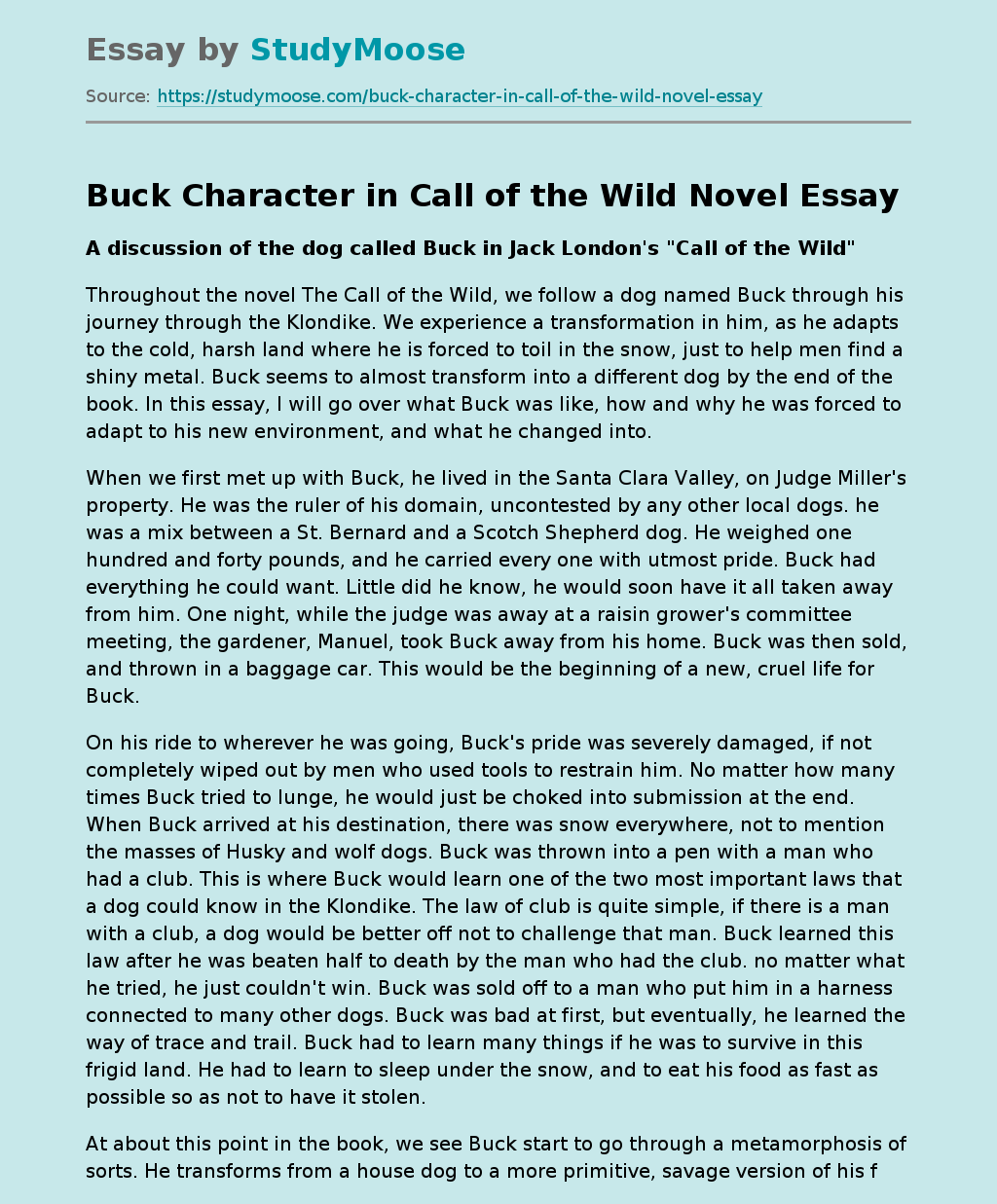