Broken April was written by Ismail Kadare, the novel takes place in the mountainous regions of Albania during the 1920’s. The Kanun is an ancient set of rules that controls the daily lives of the people in the mountains.

Don't use plagiarized sources.
Get Your Custom Essay on Broken April Just from $13,9/Page

Such as Gjorg a 26 year old mountaineer, who is pressured by his family to seek vengeance for the death of his older brother. A newspaper writer Bessian and his wife Diana Vorpsi are from the city who are very intimate newlyweds having their honeymoon in the mountains. Kadare uses the lack or there of physical proximity to imply the strong detaching power of human relationships made by the Kanun.

As illustrated by Bessian’s obsession of the Kanun causing a rejection of Diana, which is later mirrored when she develops her own obsession with it making that Bessian develops a fear of the Kanun. When Diana and Bessian were first introduced, Kadare displays a more intimate connection between them but, Bessian’s thought of the blood code is making their relationship lurking into separation.

While Bessian and Diana were riding in the carriage, Bessian, “holding his wife’s hand” and at the same time “moved his head” (61) towards the window of the carriage while watching the mountains.

His “holding” signifies Bessian’s dominating control of their relationship shown by the inequality of their grip. Bessian is illustrated as a dominating character because society and the blood code make it that women are inferior, by implying that Diana’s voice is worthless to Bessian. The method is also exemplified by “his wife”, which alludes to her unknown identity therefore making her seem like and unimportant character. The physical proximity still exists as a warm and tender relationship between Diana and Bessian but, Bessian’s unconscious interest in the Kanun is destroying on his focus of Diana, during their honeymoon.

Diana and Bessian were approaching the tower to stay the night, and they get into an argument and Bessian “shook his dead for a moment” (84) suggesting a disapproval of Diana’s immature behavior by her smiling and their connection in the relationship. The words “moment” and “flicker” describing Diana’s quick and lively personality foreshadows Bessian developing a greater aggression towards Diana because of the blood code. Meanwhile, “match” symbolizes a destructive spark causing a powerful evil fire, foreshadowing a huge physical disconnection between them.

The foreshadowing of their relationship and Bessian’s dominance leads to Diana’s opinions slowly supporting the Kanun more. After their introduction, Diana and Bessian decide to go to the tower of Orosh. During their journey and stay, Diana begins to steadily detach from Bessian and begins to become a slave to the Kanun’s seductiveness. As Diana and Bessian were planning to go to Wolf’s Pass, they were discussing about the boundary marking’s ceremony at Wolf’s Pass while inside the carriage. Diana put her head “right” (98), against the window.

The physical action of her head “right” against the window suggests that she is trying to escape the discussion of the Kanun and the honeymoon because she is trying to resist the negative energy of the Kanun. Also the other meaning of the word right, signifying correctness, suggests how she is attempting to go the correct way, from the inside her of heart, away from the blood code. Additionally during the discussion Diana exclaimed, “How many opportunities to die! ” when speaking to Bessian indirectly but directly to the window.

The action of speaking to the window reveals a rising tension of Diana being able to express her feelings to Bessian, eventually making her feel worthless. Diana’s opinion of, “how many ways to die”, is used to compare Diana’s pale, cold, piercing opinion, compared to Bessian’s warm, passionate, intrigue of the Kanun alludes to the vast differences of their ideas and that Diana is developing a slight amusement to death.

While Diana and Bessian were talking to Ali Binak, Bessian looked at his wife questioningly, as if he was saying to her, “What has come over you? (101), Bessian is starting to fear the Kanun because it is taking over Diana’s jovial sprit and replaced with a weak aggressive one. Additionally he is feeling insecure because he is not capable of giving her protection and security of a husband, therefore causing him to fear the Kanun and society it. Bessian said he saw, a “fleeting” light in her eyes. The light symbolizes purity and by it “fleeting” from her eyes shows that Bessian doesn’t know Diana’s true emotions anymore as he did before by looking into her eyes.

With their opinions bringing tension between them, Diana eventually becomes engulfed in the Kanun but still seeks an escape leading to the regrets of Bessian bringing Diana on the trip. Around the end of the book in chapter six and seven, Bessian has developed a fear of the Kanun because it has generated a dark-empty look in Diana’s eyes. His fear was later developed into a feeling of remorse that Diana has become under the Kanun’s power. Diana and Bessian were in the carriage right after she saw Gjorg for the first time.

Bessian “moved his head and kissed her timidly” (169), “Moved” throughout the book signifies a distant separation but Bessian is attempting to closely mend their relationship, by “kissing” her to show the affection he didn’t before. But he is “timid” because he is afraid of her new character from the Kanun and is questioning the existence of old Diana coming back. After Bessian attempts kissing Diana, Bessian fell asleep while Diana has her back turned to him as Kadare describes her action as, “timid, as if her back was towards a stranger” (181).

With her back turned towards Bessian and her face towards the fire exemplifies that Diana is moving more towards a strong destructive as symbolized by the fire, the Kanun. The word “stranger” shows that Bessian is no longer important to Diana and that the roles of dominance have switched. Diana and Bessian were walking in Upper White Water they were having an intimate moment until they started talking about the tower of refuge, Diana “turned her head towards the kulla” (186). Diana’s action of turning her head exemplifies submission to the Kanun and her love for Gjorg.

Meanwhile she is completely indifferent to Bessian and making an unconscious plan of going into the tower. When they were traveling back home to the city Bessian became regretful of bringing Diana and thought, “What the devil was I thinking? ” (207), the question shows a majority of Bessian’s attitude towards the Kanun. Depending on how the question is read his emotions can be viewed as regret, sorrow, anger, fear, or hopelessness of completely losing Diana to the mountains. “Devil” is used as a symbol of evil perhaps referring to the evil separating power of the Kanun.

In conclusion, Kadare uses physical proximity to emphasize the destructive power of human relationships made by the Kanun. In the beginning Bessian was in power because the man is seen that way in society and in the Kanun, but his obsession foreshadows Diana and Bessian’s separation. Second, Diana is trying to escape the power of the Kanun but is later completely submerged in its power. Lastly, the trip to the mountains was eventually regretted because the Kanun completely changed their intimate relationship because Diana and Bessian because it they were outsiders going into an unknown power. 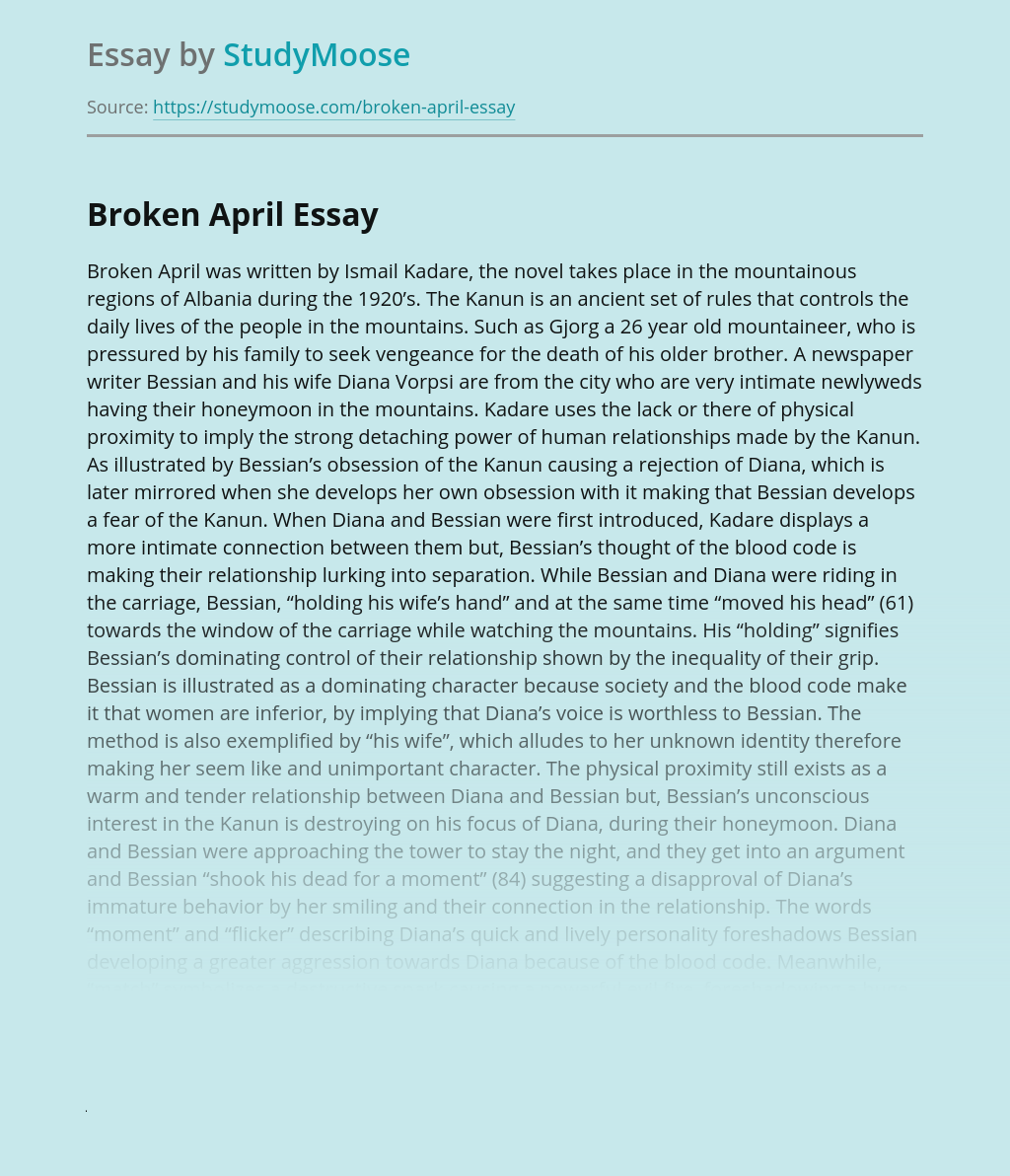 Detailed explanation of how other businesses support the retail sector P2

There are several services that assist in the retail sector to keep business going and running efficiently and without these services it would be very tough if not difficult to get an organisation off the ground or even keep one running. Opening a sports store in Manchester To start with we require a place for...

1. The apprenticeship and your role In this induction section you will show that you understand the employer/employee relationship and what someone who works in the health and social care sector is required to do. The Workbook will help you to show that you follow agreed ways of working. KNOWLEDGE AND UNDERSTANDING Task 1 WorkSkills:...

The variables of interest are oil imports to Germany, and temperature in Germany. The latter is used as a leading indicator for the former, to improve on the forecast obtained by the univariate model. Both variables are collected over a time range from January 1985 until and including December 1997, whereas the last year is...

Nabisco is a company that has been in existence since 1898. During their 109 years in existence, they have grown through natural growth, mergers, and acquisitions. This has allowed Nabisco to be the leading snack maker in the world. The Oreo chocolate sandwich cookie was first introduced in Hoboken, N. J. in 1911. Oreos today...

The qualities that define an effective teacher are very complex in my opinion. Everyone seems to have different ideas as to what the key indicators are. They range from; professionalism, communication, professional development, managing, guiding and strategies. There are even those of the opinion that it doesn’t matter what you do, children will always learn....