Specific Purpose: To inform my audience about the bottlenose dolphin species. Central Idea: Dolphins are unique creatures that possess numerous abilities such as, their intelligence, communication skills, and behavioral patterns.

You swim for a period of time and then suddenly realize your oxygen supply is slowly running out. You swim to the surface and breathe, then your right back at it, swimming with no cares in the world. If you haven’t realized it by now, you’re a bottlenose dolphin.

I.An ability identified in dolphins is the high level of intelligence that these animals naturally possess. a.Intelligence is revealed when analyzing their brains.

i.The brain of an adult is about 25% heavier than the average human adult’s brain (Rohan, 2003). ii.Right below humans IQ of 7.4, some dolphins follow with a 5.6 IQ, which is more than double of gorillas, and chimpanzees (Rohan, 2003). b.Intelligence is also revealed through a dolphin’s mental capacity to comprehend language.

1.Dolphins had no trouble distinguishing objects based on hand signals or acoustic language. (Wexler, 1994). iii.A dolphin witnessed a tourist smoking through the aquarium glass. 1.The dolphin imitated the action by releasing a mouthful of milk from his mother (Rohan, 2003).

Transition: Now that we have established that Bottlenose Dolphins are highly intelligent, we will now discuss to their ability to communicate.

II.A second ability that a bottlenose dolphin demonstrates is their keen sense of communication. a.Communication occurs within the dolphin itself. i.This includes a range of echolocation clicks in the dolphin sonar system used to identify objects underwater. ii.Studies by the US Navy have proven that a dolphin’s sonar communication is accurate. 1.Dolphins can locate a 3-inch sphere 400 yards away (Wexler, 1994). b.Communication can also occurs between two or more dolphins. i.This was measured using the rate of whistling in dolphins. 1.According the University of St. Andrews’ study, of 29 different dolphins, whistling rates during non-polarized and socializing movements were higher than surface travel (Quick & Janik, 2008). ii. Dolphins alert stress levels to other dolphins by altering the pitch of their signature whistle (Wexler, 1994).

Transition: After learning about a dolphin’s sense of communication, we can now build upon this information by examining their unique behavior.

III.A final ability worth noting is the social inclination of dolphin behavior. a.It has been proven that a lot of their behavior revolves around social activity. i.Randall Wells and his team observed groups of male dolphin behavior in Sarasota Bay, Florida. 1.The dolphins lifted their heads, which allowed them to toss each other out of the water.

2.This proved that these interactions were defining their social relationships (Rohan, 2003). ii.Another study consisting of 52 dolphins proved that social interaction varies within demographics. 1.Results showed that adults had higher social activity when 33 adults present compared to when 17 juveniles were at a social site (Gero, Bejder, Whitehead, & Connor, 2005). b.Dolphin behavior has been socially observed when they are entertaining themselves and others. i.Dolphins behave in a responsive manner when seeing their reflection. 1.This has only been previously seen in apes.

ii.As humans, we have seen dolphins behave in an entertaining manner when fishing together (Rohan, 2003). 1.Dolphins formed a circle of mud to catch mullet.  2.This game begins with one dolphin, followed on cue by others, creating the mud to rise for catching the mullet. (Rohan, 2003).

Transition: Now that we have learned about the behavior of dolphins, let’s tie these three concepts together by returning to the dolphin image.

Conclusion: This image reveals the power of a dolphin’s mind along with its keen sense of communication skills to carry out this performance. Their abilities to engage in social behavior are also prevalent when seeing the dolphin work with a human being. After giving you information about a Bottlenose Dolphin’s intelligence, communication skills, and behavior, it is my hope that you have furthered your understanding of these unique mammals, along with the abilities that they possess. 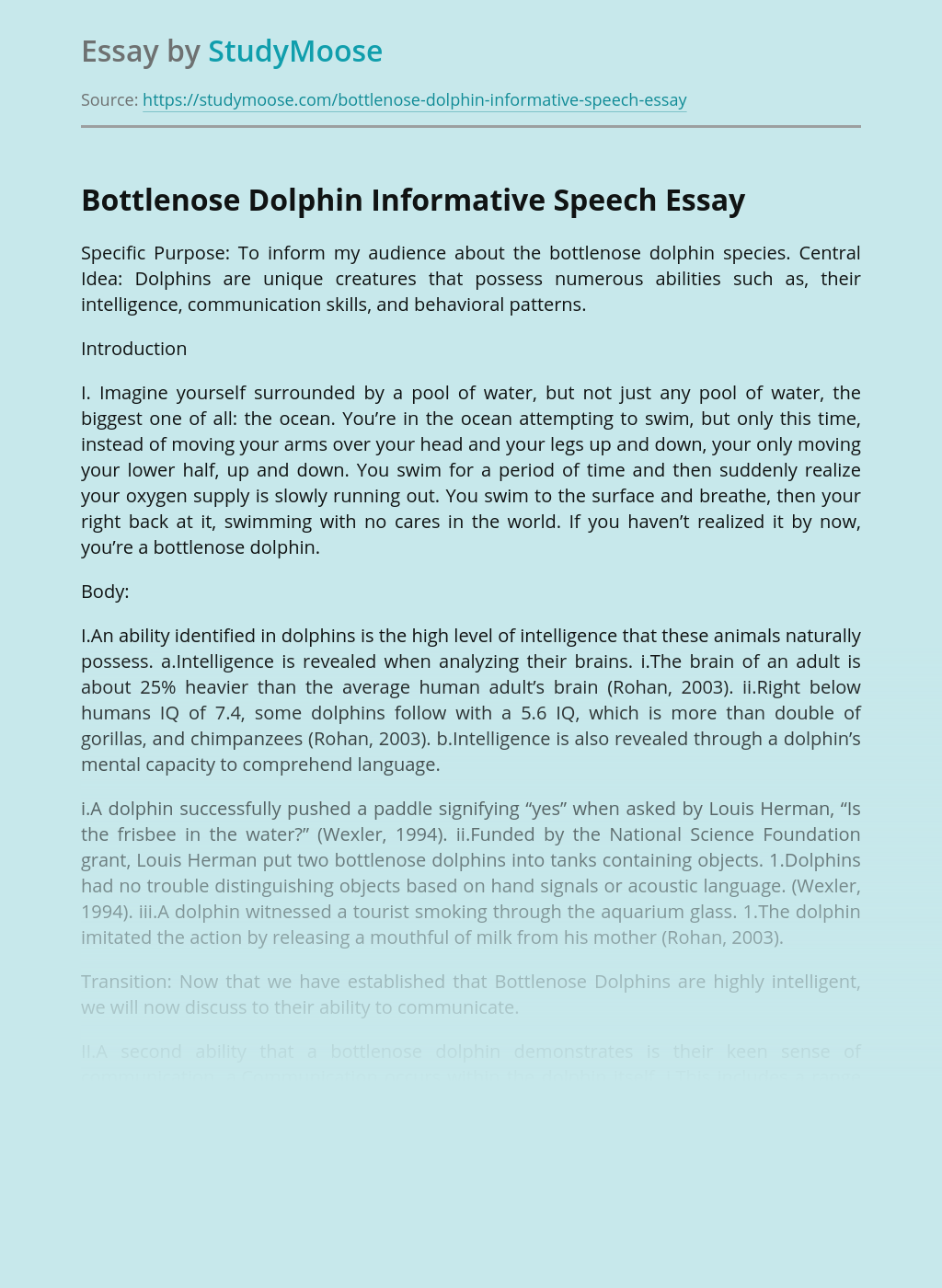