Book review: The Curious Incident of the Dog in the Night-Time

The novel The Curious Incident of the Dog in the Night-Time was an interesting book with many conflicts between the characters in the plot. The protagonist, Christopher was a teen who most likely had forms of autism experienced events that hurt him causing him to feel deceived. Christopher Boone an innocent child finding out new truths hidden by his father. This novel was a great enjoyment to read but I didn’t really enjoy the ending. He gets to develop his mindset and get a better understanding of his mind.

Don't use plagiarized sources. Get your custom essay on
“ Book review: The Curious Incident of the Dog in the Night-Time ”
Get custom paper
NEW! smart matching with writer

At the beginning of the novel, Christopher discovers Wellington the dog dead with a garden fork. He decides to find out the culprit of this so-called murder. When his father found out about this little detective work his son was doing, he became very upset. In the novel, it states, “Then father banged the steering wheel with his fist and the car weaved s little bit across the dotted line in the middle of the road and he shouted, ‘I said leave it, for God’s sake.

'” His father later confesses that he was the one who killed Wellington which attacked Christ mentally.

Throughout the novel we later learn that Christ has begun to realize his own limits and to think outside of his mind. He also uncovered letters from her mother hidden in his Dad’s room. His mother was actually alive and living well in London with Mr. Shears. She truly loved her son but left because of the affair and her temper to deal with Christ.

He set out on a journey to go from Swindon to London in search of his mother because he no longer felt safe in his own home. In the novel, it states, “And then I knew that it wasn’t a joke and I was really frightened. Father said, “We all make mistakes, Christopher. You, me, your mum, everyone. And sometimes they’re really big mistakes. We’re only human.” Then he held up his right hand and spread his fingers out in a fan. But I screamed and pushed him back so that he fell off the bed and onto the floor.” He felt frightened, confused, unsure of what to do next.

He doesn’t technically lose his innocence but he is growing beyond it. Christopher’s actions and discoveries in solving the mystery, writing a book, and finding his mother, although technically successful, have led him to the conceptualization of his own flaws as part and parcel to his expanded understanding of the world in a bigger perspective. Christopher is nevertheless limited in his ability to function to a level that most people would find normal. Emotional connections with those around him and empathy with other people are restricted. Nuance and subtlety in the form of both verbal language and facial expressions are lost in him. This story was quite captivating seeing the world through a 15-year-old to live with a form of autism in a society, how it limits him from what is normal and not.

Book review: The Curious Incident of the Dog in the Night-Time. (2020, Sep 28). Retrieved from http://studymoose.com/book-review-the-curious-incident-of-the-dog-in-the-night-time-essay 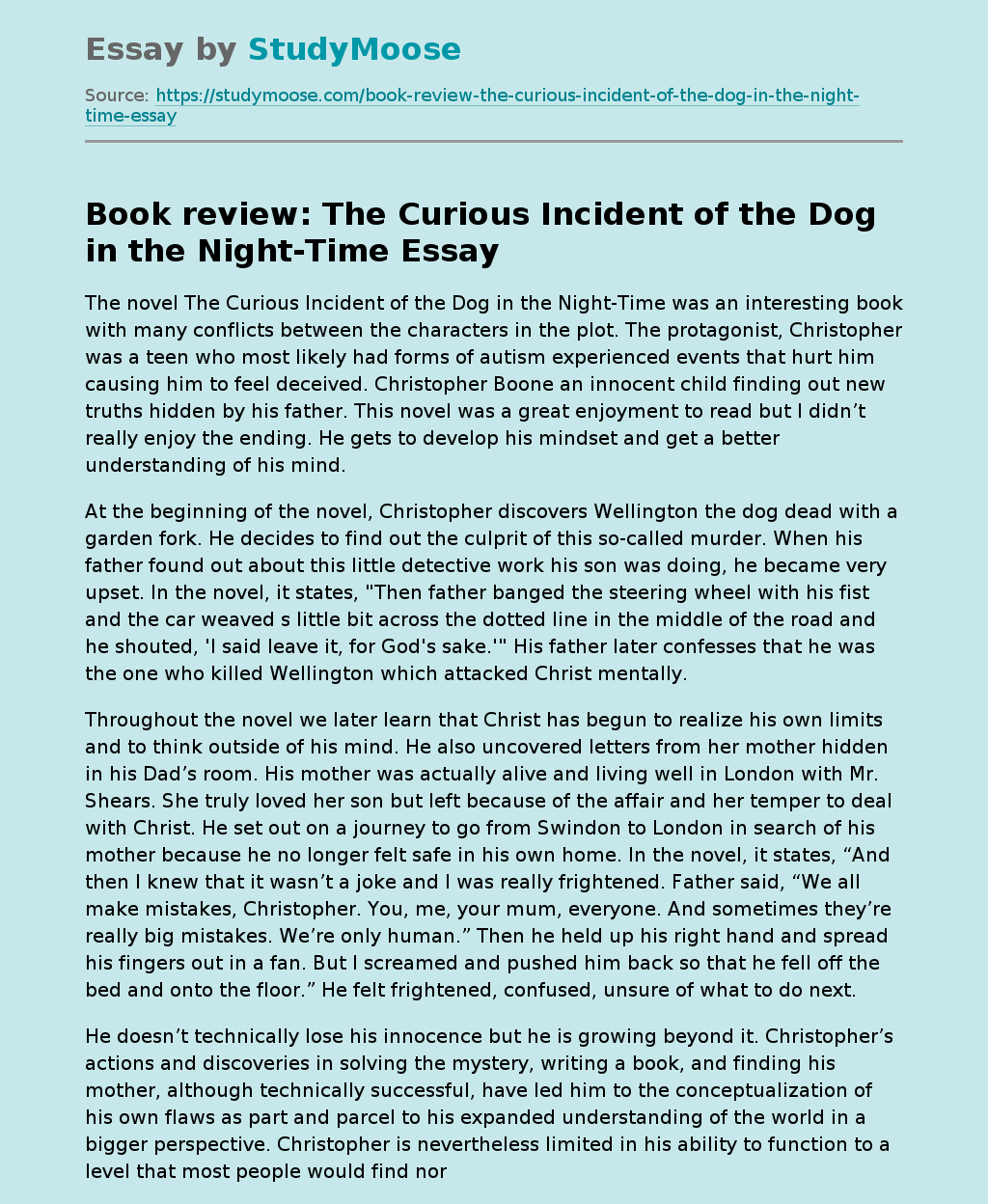