The curious incident at the dog at night time was a good novel. It was also a little bit sad at the same time because the ending was not how I expected it would be. The author of the novel wrote good descriptions of the characters and you could easily form a picture of how they look like. He wrote the story as a monolog, where Christopher expressed exactly how he was feeling about people and what was happening around him.

Don't use plagiarized sources. Get your custom essay on
“ Character Evolution in The Curious Incident of the Dog in the Night-Time ”
Get custom paper
NEW! smart matching with writer

A part of the novel I disliked was when Christopher feared his father. Because he should listen to his father and let him explain why he did what he did, also he said himself the person who murdered Wellington is a person who knows Mrs. Shears and wanted to harm her. His father’s intention was to harm Mr. Shears. He should not be so mad at his father when he told him that his mother is alive because he did, it to protect him and I understand him to be mad at him, but he should also see from his father perspective.

Proficient in: My Story Book

A Part where I liked was when Christopher found out that his mother was alive because he thought all this time that she was dead. Why I liked that part was because it was a turning point in the story.

The novels main character is Christopher and he is the boy that the whole book is about. Everything that is told in the book is from his point of view.

Christopher, 15 years old is not like other young teenagers. He is completely different and that is what makes him who he is. He is very good at math and he is taking A-level math at his school. Christopher dislikes a lot of things and especially to be touched. He likes when things are in order and there is logic in it. Christopher lives with his father which is also a character in the book. Christopher’s father is a single father that takes care of his son. Father helps a lot Christopher with what he needs.

He, for example, preps meals for him and helps him with his daily needs. Father is hiding things from Christopher and he is not being honest with him. Father owns a business boiler repair and heating maintenance. Christopher’s father’s name is Ed Boone. Another important character is Christopher’s mother which is alive and in the being of the story he thought she was dead. When the author describes his mother it’s from Christopher’s memories of his mother when he was younger. The memory of her is that she was very loving, and she was also impatient compeer to his father. She writes 43 letters to him explaining why she left him and his father. Which was that she saw how happy they would live without her. In the letter, she explains how she could not stand Christopher’s behavior and with her impatient, it would only make life harder for all of them. For example, a part in the book when he and his mother was Christmas shopping and Christopher threw a tantrum in the store. She really loves Christopher and all that but at the same time, she has doubts about her strength to take good care of him. She writes also about how she fell in love with Mr. Shears and moved to London him.

The ending was not how I expected it to be. I thought Christopher would live with his father and they would live happily ever after also that Christopher would forgive his father. But that was not how the book ended. It ended completely different than I expected. Christopher decided to live with his mother and he was still afraid of the father because he thought he would kill him in the same way he killed Wellington. Mother does not anymore live with Mrs. Shears, he left them with his car and I think they are not in contact with each other. Because they had a huge fight with each other about Christopher and mother did not want to say to her own son the leave their house. I think in the future Christopher will talk to his father maybe forgive him if he feels for it and they will have a good relationship with each other, but it will not be as it was before. Christopher will have a much better relationship with his mother and they will live happily together. Also, his mother will understand his condition and handle them better than before and be more patient with Christopher.

The minor character in the book is Christopher’s father which helps him all the time with is daily stuff and Siobhan which is his school teacher. She helps Christopher a lot in school, for example, remain calm when somebody does him wrong. Mrs. Alexander which is Christopher’s neighbor and she is the one telling him about his mother and what she did, and which makes him curious and want to find is his mother is living. Toby is another important character in the book. He is Christopher’s pet rat. He really cares about him and loves him very much. Why the author chooses these characters are because they are the reason the story is going forward. For example, his father, he has secrets that will hurt Christopher and in the being the author’s point was to get the reader’s interest to guess what he was hiding from him.

There are times where you need to lie because you are protecting someone that means something to you or when you need to cover up for someone. But in Christopher’s father situation he might not lie because it really hurt the person more the protecting him. In that situation, it would be better if he told him the truth instead of lying to him. In situations where the truth would ugly if it came out there you should be honest and tell the truth because that might save your relationship with the person. That’s when its right to tell a white lie. Sometimes the truth might be better to leave it out. For example, if you think a person’s shirt is ugly you might leave it out because you can hurt the persons feeling, or you can tell a white lie and say it is looking good on you.

Why the author wrote this novel I think his purpose with this book was about to not lie about the important things and there are young teenagers that has Asperger which many young people do not know about. For me, this book thought me a lot about Christopher’s disease which I never heard of before. I think also that sometimes the truth is better to tell because it would take more damage if it is not told. For example, in the book Christopher’s father should have told him about his mother instead of lying and even worst to tell that she is dead. The author’s point was that is made a lot of problems to his father, Christopher ran away from home and he is afraid of his father. If he had told him Christopher would be angry and sad but instead, he chooses to lie. Which was a bad idea, the author shows in any part in the book where the truth is better to be not told? Sometimes it’s better to tell a white lie than the whole truth.

If I would compare this book to another I would choose “the boy in the striped pajamas” written by John Boyne. The similarities with these two books is that is about two young boys where their fathers are protecting them from the truth. Both books are told from the main character’s point of view. The readers are reading their stories about how they live and what they do in their free time. In the book “the boy in the striped pajamas” is the main character Bruno and he is nine years old, his father is hiding the truth about real life. Bruno is a kid and does not understand what the adults are doing and what’s going on around him. It is the same with this book because Christopher has no idea of what really happened to his mother beside what his father has told him.

He is also curious about what happened to the dog and that is his mission to find out what had happened to the dog. Bruno on the other is wondering why his friend Shmuel has striped pajamas on him and he is curious about that. The differences between the books are most that “the boy in the striped pajamas” are taking place back in the days, in the worldwide 2 war in Germany and it’s about the Nazis and how the Jewish people lived. The book “the curious incident at the dog at the night time” is taking place in a small town named Swindon, in England. There is no war going on and Christopher goes to a normal public school. He lives in a house with neighbors and his father only. Bruno lives with his mother, father, and his older sister. They live in this big house with no neighbors and he has homeschool instead of going to a school. Bruno is just a naive little kid and Christopher is suffering from his disease which makes him also naive and he is not understanding when his father tells him, for example, don’t poke your nose into other people’s business. These two books have a lot of similarities but at the same time, it has a lot of differences too.

Character Evolution in The Curious Incident of the Dog in the Night-Time. (2021, Dec 02). Retrieved from https://studymoose.com/character-evolution-in-the-curious-incident-of-the-dog-in-the-night-time-essay 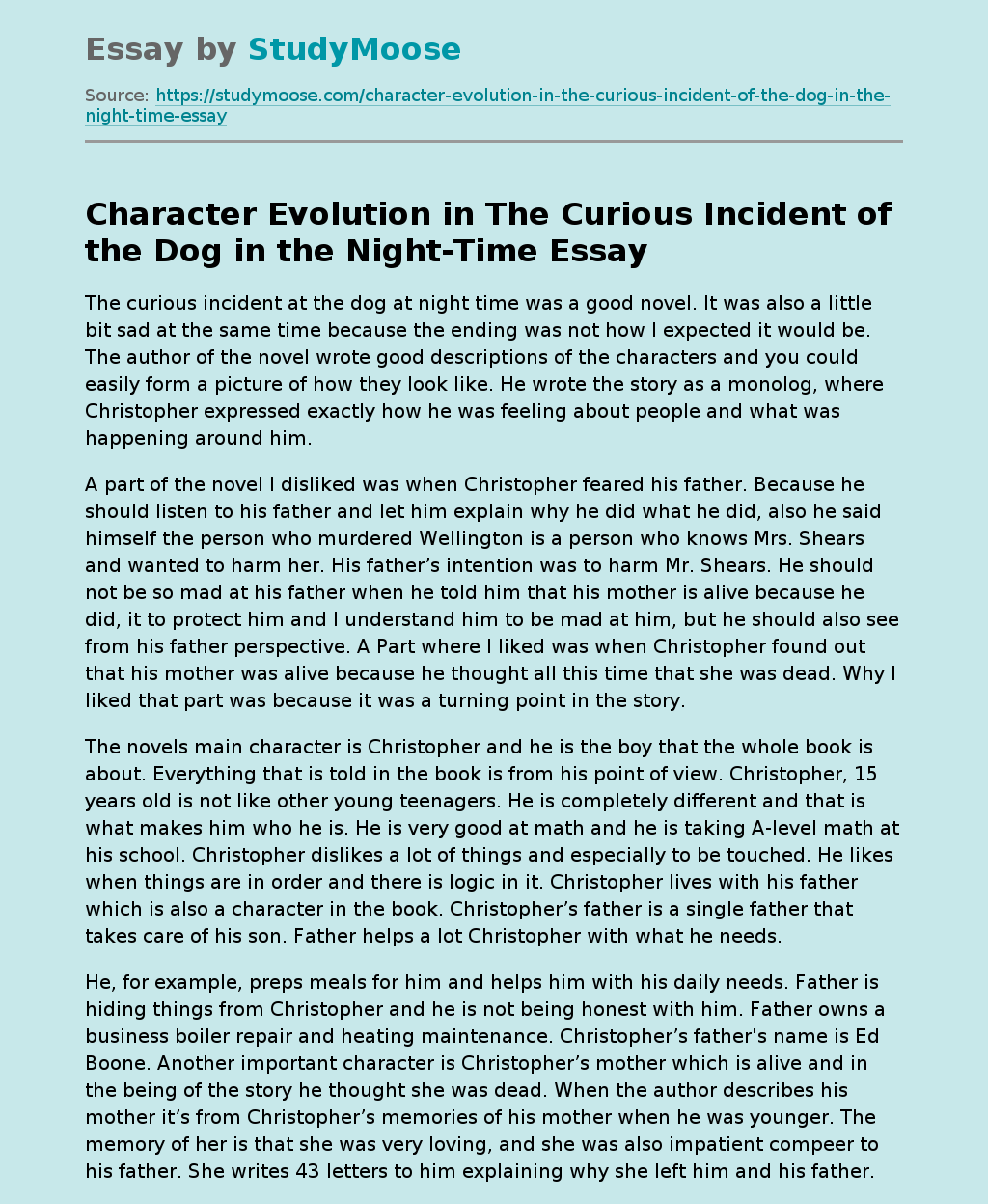