Although the article “Blue-Collar Brilliance” by Mike Rose provides the reader insight on the importance of blue-collar jobs, David Foster Wallace’s “The Kenyon Commencement Speech” hold stronger arguments because it thoroughly and realistically explains the significance of a college degree and how our educational freedom helps us be more self-aware.

The essay, “Blue-Collar Brilliance”, explains how it’s wrong and unfair that a formal education ultimately demonstrates the true value of intelligence. Mike Rose begins his essay by introducing a personal example of how his mother, who quit school in the 7th grade, works a blue-collar job in a restaurant.

Don't use plagiarized sources. Get your custom essay on
“ Blue-Collar Jobs in Rose’s and Foster’s Books ”
Get custom paper
NEW! smart matching with writer

He then explains how she learned social and interactive skills and also understood psychological behaviors such as “reading social cues, managing the customers’ and her own feelings” (Rose 4) as she encountered different people at her job.

In his opening statement, he notes how his mother “shaped her adult identity as a waitress” (Rose 1). He explains how the use of tools in every day factory jobs, like his uncle had, requires motor skills that are not necessarily taught in school.

He observed various workers while on their job and noticed how they all have specific skills that they have accumulated and perfected over the years. He concludes that by acknowledging a broader perspective on the significance of blue-collar jobs, our society might be able to accept them as more than a “muscled arm” (Rose 5) generalization.

Rose makes an acceptable argument, however he does not mention opposing arguments in his essay. With blue-collar jobs, it’s usually associated with minimum wage jobs.

Blue-collar workers are barely getting by these days since more jobless people (some who actually have college degrees) are applying for more minimum wage jobs, therefore increasing unemployment for blue-collar workers.

A blue-collar job comes with a lot of disadvantages like, “lack of mental stimulation (repetitive routines), physical exhaustion, hazards on the job, social prejudice, and loss of jobs to automation” (The Pros and Cons of A Blue-Collar Career, Harrison 1).

He also suggests how it’s unfair that society seems to think that a job requiring less education means it requires less intelligence. It’s a valid point, but he doesn’t mention that there are manual work out there that don’t necessarily require their workers to be very smart anyway. Packaging boxes, for instance, is a step-by-step process that any competent person can do. He seems to mix the term “intelligence” for “competence”. Regular factories don’t require much from their employees other than following a simple, yet specific process. It doesn’t take much for the employees to hammer in that process into their workers if they all adapt a routine every day.

Rose’s personal examples are unique and rare – but it does not prove anything about the reality of manual labor. Not every blue-collar worker experiences that kind of intellectual and emotional growth in his or her job. In his essay, he also implied that white-collar jobs are not as rewarding and beneficial as blue-collar jobs. We would not have this society if it weren’t for the formal education people had. A college education can be out of reach for some people, but there are scholarships within reach and available to low-income students. He should have added some more research or statistics to explain the intellect levels of the blue-collar group in order for him to successfully refute the relationship between intelligence and a formal education.

David Foster Wallace’s commencement speech at Kenyon strongly explores the deeper reality and significance of a college degree and a student’s educational freedom. In the beginning of his speech, he tells a didactic story about a conversation between an older fish and two younger fish. The older fish greets the other two and asks, “How’s the water?” (Wallace 1), while the two younger fish replies with, “What the hell is water?” (Wallace 1).

He goes on explaining how education ultimately teaches us how to think. He defines the true meaning of getting a college degree and how it helps us learn “to be just a little less arrogant” (Wallace 4). He explores the values of how something as simple as awareness can help students utilize knowledge properly. He mentions how post-graduates usually go through this kind of aimless, empty, day-to-day routine when they finally get their careers that they’ve sought from the start. He also suggests that humans need to learn how to adjust their natural default setting. Being more aware and less arrogant about the things we learn, he claims, is something that the world needs to adapt to.

Wallace’s speech starts with this metaphorical story of the fish. It works because college students can relate to it. He uses metacommentary (“the point of the fish story […]”) to explain his point that the fish are humans and the water represents the knowledge surrounding us. “Water” seems be surrounding us everywhere, but we don’t seem to acknowledge it, as we should be. He explains how a college education should be the motivation to get out there and think the “right way”, as he himself has made mistakes.

He mentions how self-centeredness is a huge part of the human default setting that it’s hard for us to crawl out of that state. We always seem to be thinking of ourselves all the time and how all these decisions we encounter affect us. He asserts that self-absorption and unconscious internalization hides students from the significance of the knowledge they have acquired during college. He indicates that liberal arts essentially teaches students different beliefs, which will help them to be more open-minded towards different perspectives.

It reminds and encourages his audience that earning a degree isn’t nearly enough to be “well-adjusted”, in his terms. Sometimes, students need to find a way to independently think for themselves and not from a close-minded way. He successfully encourages his audience to re-program their ways of thinking and be more aware of the realities found in the real world. Even if these college students have not fully grasped what he said about “the day-to-day trenches of adult life” (Wallace 10), he conveys this message throughout his speech that they should not only know what to think about, but how they should think and react.

He casually mentions how some might think that he’s preaching all these moral values, but he counteracts it effectively by empathizing with the opposing audience by saying truthfully that it is difficult, “takes will and effort” (Wallace 9), but “if you really learn how to pay attention, then you will know there are other options” (Wallace 10) to consider and learn from. He then argues how educational freedom is a real gift to students everywhere, as it teaches them to be more well-adjusted.

His speech then slowly morphs into an advice for the younger students to be more liberal and unbiased as they live their life. He asks his audience to acknowledge simple awareness and the “real value of a real education” (Wallace 12). He also included an anecdote about an older person going to a grocery store and encountering all these everyday annoyances while waiting in line. He tells this story, while giving off a sense of frustration and longing through his words. It displayed the reality of growing up after college and not finding a sense of direction in one’s life.

In his concluding paragraphs, he almost seems to beg his audience to follow his advice because he implies that he has not achieved it yet. He wrote the speech with an informal, yet honest way of writing and included some harsh words, which especially helps when reaching out to his core audience. The honesty and casualness to it gave justification to his reasons especially since his arguments provided a clear and concise structure personally built for his readers. He empathizes with his audience and ultimately succeeds in persuading them about the true meaning of a college education.

Both speeches closely examine the human nature and how we all seem to adapt and utilize different kinds of skills and knowledge as we go through our lives. The message here is that workers and students alike are both faced with a rude awakening as they journey to a different kind of reality to find their own sense of identity. Although Mike Rose’s essay, “Blue-Collar Brilliance”, sheds a broad light on blue-collar jobs by specifying examples of workers learning heuristic skills without completing a formal education, he also fails to address other possible and realistic opposing viewpoints to support his own argument.

However, David Foster Wallace’s “Kenyon Commencement Speech” is able to present all his points through a different, yet effective way and explain his reasoning why a college degree is necessary to understand our educational freedom and self-awareness that we always seem to take for granted. Wallace’s speech inspires a more thought-provoking discussion, by being straightforward with his audience. He didn’t try to lecture the reader about “life”, but he explained the real world and the way people should think and apply what they have learned in school to good use. 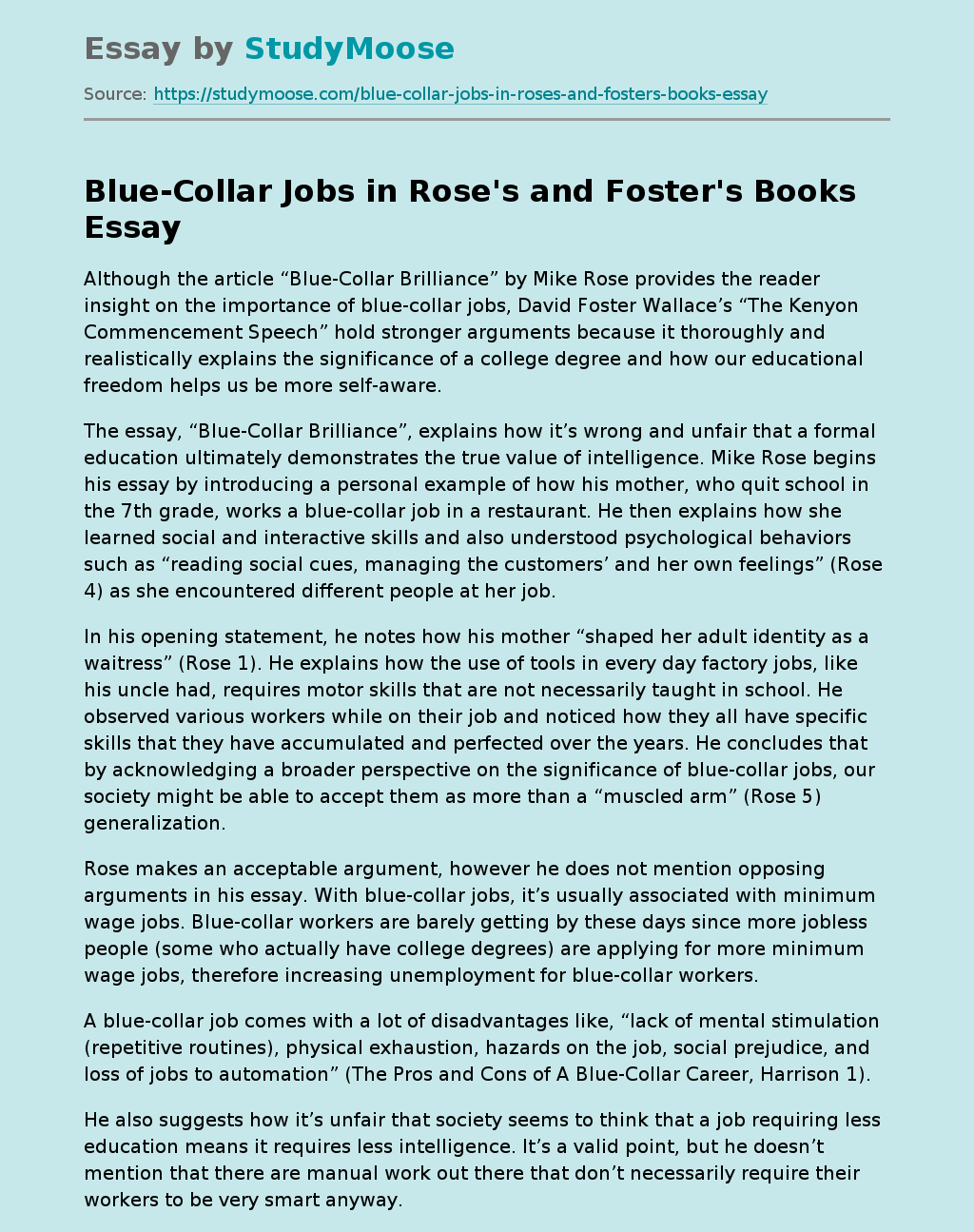