The musical play Blood Brothers, written by Willy Russell, is the story of twins separated at birth. Mrs Johnstone, a working-class Liverpudlian mother of seven children, agrees to give one of the twins she is expecting to her wealthy but barren employer, Mrs Lyons. The infant kept, Mickey Johnstone, grows up in poverty while his twin, Eddie Lyons, enters a privileged life. Bound by fear of discovery, and superstition that should either of the boys learn he has a twin, both will die on that day, so the mothers keep the exchange secret.

Don't use plagiarized sources. Get your custom essay on
“ Blood Brothers by Willy Russell ”
Get custom paper
NEW! smart matching with writer

Completely unaware that they are brothers, Mickey and Eddie meet as seven-year-old children and form friendship that lasts until the day they die. It is that concluding tragic event in fact, that is the opening scene of the play, which then backtracks to recount their separate and interwoven lives of success and despair. Willy Russell wrote “Blood Brothers” in the 1960’s. He was born in 1947, in Whiston which is just outside Liverpool, and has based the story here around his own experiences.

He grew up in Liverpool in a working class family, singing in clubs to earn a living and at the age of 22 he worked in a warehouse to raise money for college. He was confronted even from an early age with the injustice of the two-class society. Thus there are clear biographical parallels to the character of Mickey. He was also influenced by females during his life thus the strong relations to the mother in this work.

Liverpool in those days was split according to social class.

This means people in that time were divided along the lines of being rich and poor, the educated and non-educated etc. Liverpool has been the home to one of the highest levels of unemployment in the developed world, with over 25% of the workforce out of a job, and it is important to consider this when taking account of Russell’s depiction and own views of class and unemployment The main theme of Russell’s play is based on this social class difference although there are strong elements of fate and destiny, superstition, surrogacy, childhood and adolescence, humour and tragedy.

Blood Brothers is more than a simple morality tale of twin brothers separated as infants, who, after radically different upbringings, reunite (oblivious of their blood bond) as closest friends. It also focuses on two very different mothers, one-the birth mother- unselfishly giving and accepting, while the other’s love is neurotic, stifling and ultimately destructive. These two mothers lived all their lives close or near to each other, but in terms of class they lived miles apart. Mrs. Johnstone a single and working class woman is earning a meagre living as a cleaning lady at the home of the affluent Mrs.

Lyons. We are first introduced to Mrs. Johnstone, who describes her experience of a halfhearted marriage and the arrival of her numerous children. It is with a bittersweet attitude of acceptance that she explains the moment her husband deserts her, the costs of living for which she has little means and the news that she is expecting not one more mouth to feed… but two. Mrs. Lyons does not need to go to work, only shopping. In contrast to this Mrs. Johnstone cannot even pay the milkman, she says, ” I said, I said, look, next week I’ll pay y’…. ” We see the contrast of social classes between Mrs.

Johnstones home and the home in which she cleans, the home of Mr. and Mrs. Lyons. Whilst the home of the Johnstones plays host to the constant clamour of childhood Games and battles, Mrs. Lyons is often alone whilst Mr. Lyons is on business, in an impeccable house that suffers somewhat from a cold and sterile atmosphere. The opening scenes develop this theme. All through the play we see significant differences between Mrs. Lyons and Mrs. Johnstone. In the beginning the Narrator describes Mrs. Johnstone as “the mother, so cruel” – but this is not actually what he means. For instance, the fact that Mrs.

Johnstone allows the boys to go to the cinema to watch the ‘Swedish Au Pairs’ film could be seen as negligent, and we know that Mrs. Lyons would have definitely not been so liberal. In reality we see that Mrs. Johnstone has a better understanding and acceptance of the fact that young boys will be sexually curious and she does not try to suppress their curiosity. She is depicted as a down to earth and the more approachable mother- she of course gains instant credibility with her two sons. This incident also exemplifies that happiness when growing up is not assured by social status or wealth. Instead of viewing Mrs.

Johnstone as a cruel character, we are lead to sympathise with her dilemma. We see her handle her house full of children with endless patience and tenderness. Despite being trapped by her social position and her lack of funds, she is down to earth and does not see money as the answer to her problems. We see her refuse money (for giving her child away) from the desperate Mrs. Lyons – MRS LYONS: Thousands… I’m talking about thousands if you want it, and think what you could do with money like that. MRS JOHNSTONE: I’d spend it. I’d buy more junk and trash; that’s all. I don’t want your money. I’ve made a life here.

It’s not much of one maybe, but I made it. In contrast, Mrs. Lyons is very aware of her social position and the above scene indicates that she sees money as a solution to the problem of Mrs. Johnstone. Mrs. Lyons is also portrayed as a cold woman who doesn’t show much emotion. She is very over-protective of Eddie and fears his bond with the Johnstones. Later in the play this fear becomes more evident and she appears as a troubled, weird character that appears to be losing control – this is evident when she attempts to attack Mrs. Johnstone with a kitchen knife. Mrs. Johnstone is very strong not only physically but also psychologically.

She is not a person who cries for help and gets depressed and upset if something goes wrong. An example of this is highlighted on the way she copes (“… laying on a smile for him… “) with the judge when Sammy gets into trouble. In contrast to this Mrs. Lyons asks for help from her husband every time she has difficulty. She gets depressed very easily e. g. when Eddie isn’t in the garden because he went away to play with Mickey, so Mrs. Lyons forces her husband to leave work during the day to find Eddie. She also runs away from problems whenever she can, rather than dealing with them e.g. she was prepared to move homes to split Eddie from Mickey. 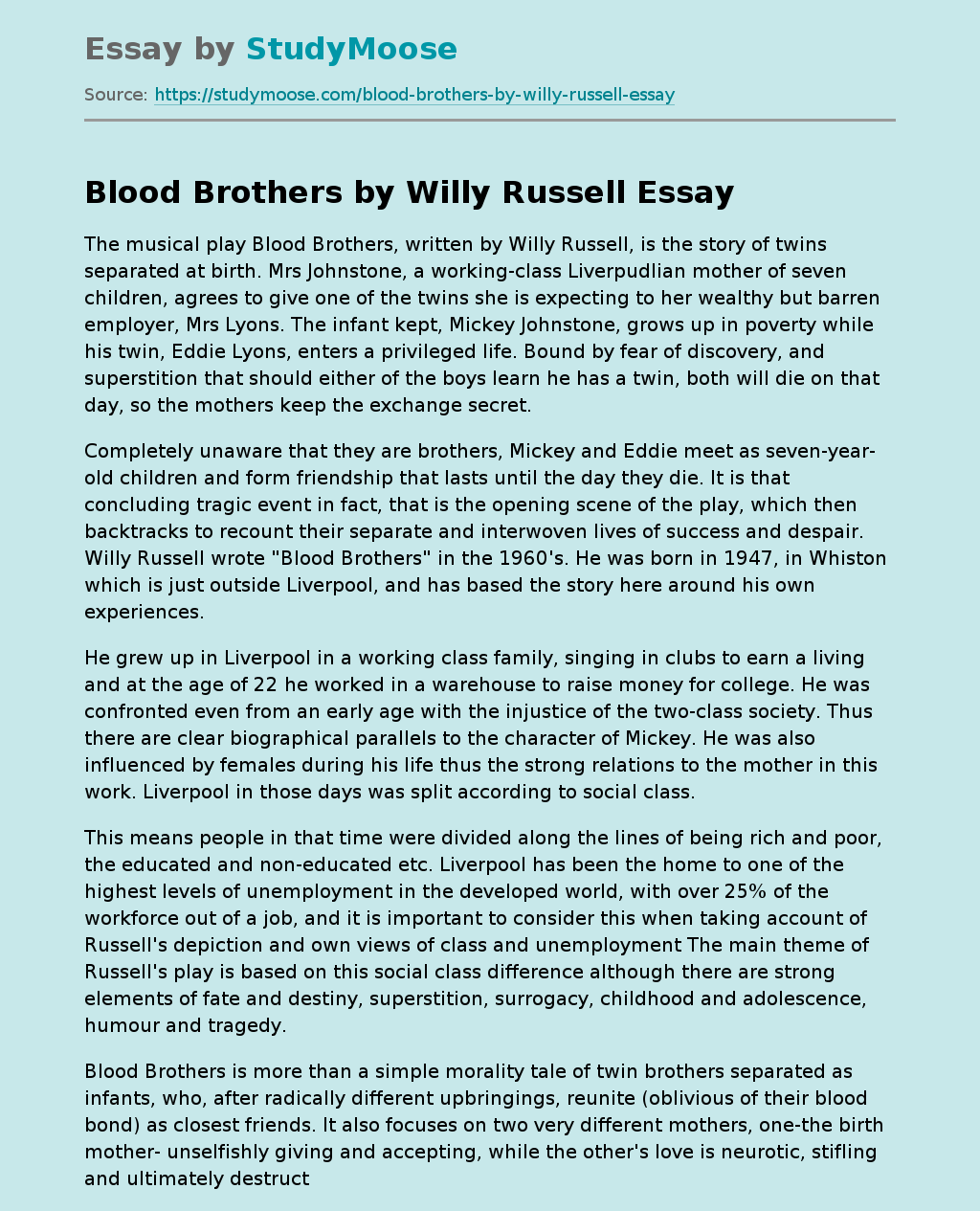