On August 9, 1969 the seven innocent victims of the Tate-LaBianca murders were senselessly slain by a vicious cult and their leader Charles Manson…
Manson’s childhood was a troubled one, he was born Charles Milles Maddox on November 12, 1934 to sixteen year old Kathleen Maddox in Cincinnati, Ohio. Shortly after his birth, his mother married William Manson which gave him the name that is so well known today. Manson never knew his birth father. Not much is known about him other than he was a “Colonel Scott” of Ashland, Kentucky.

Don't use plagiarized sources. Get your custom essay on
“ Biography of Charles Manson ”
Get custom paper
NEW! smart matching with writer

In 1939, Kathleen was sentenced to prison for armed robbery, and a young Charlie spent the majority of his youth living in the homes of relatives and numerous boys homes. At the age of nine Charlie started his criminal career by burglarizing homes and stealing cars.

Manson’s first violent offense came in 1952 when he sodomized another boy while holding a razor blade to his throat during his stay at a reform school. He was released in 1954 at the age of nineteen and met a young woman named Rosalie Willis.

They married in 1955 and a year later had a son, Charles Manson Jr. One month after the birth of his son, Manson was arrested for stealing cars and sentenced to three years which he served in San Pedro, California; his wife filed for divorce.

After his release in 1958, Manson made a living by pimping, stealing checks, and conning women out of money. During this time he met and married a woman by the name of Leona and had a second son named Charles Luthor Manson.

Leona divorced Manson after he was arrested yet again in 1960 and sent to McNeil Island Penitentiary.

While serving his six year sentence Manson met a man by the name of Alvin “Creepy” Karpis, who happened to be a former member of Ma Barker’s gang. Karpis taught Manson to play the steel guitar which led to his obsession with music. Manson devoted much of his time in prison to practicing and writing music and held the belief that he would be a famous musician. Upon his release on March 21, 1967, Manson moved to San Francisco, California and began to collect a following of people. In 1968, Manson and several of his followers drove to Southern California where he met Dennis Wilson of The Beach Boys. Through Wilson, Manson was introduced to Doris Day’s son Terry Melcher. Manson believed that Terry was just the person that could help further his music career and was very upset when things did not work out.

During this time the Manson Family moved into Spahn Ranch where Charles started piecing together his own philosophy based on a number of different religions. According to his interpretations of Revelations 9 and the Beatles’ song Helter Skelter, Manson also believed that there was a race war that was to take place in the summer of 1969 during which all of the black people were going to slaughter the white people. When this “war” did not take place Manson told his Family that they should “show the blacks how to do it”. (Rosenberg, 2010) On August 8, 1969, Manson ordered several of his Family members to kill any people inside the house at 10050 Cielo Drive. This house formerly belonged to Terry Melcher but was now being rented by Sharon Tate and her husband Roman Polanski, who happened to be in Europe on business at the time. Manson told his followers to “do something witchy”.

After midnight on August 9th, Tex Watson, Susan Atkins, Leslie Van Houten, Patricia Krenwinkel, and Linda Kasabian walked up to 10050 Cielo Drive where they brutally shot and stabbed their first five victims; Steven Parent, Voytek Frykowski, Abigail Folger, Jay Sebring and Sharon Tate. Tate was eight months pregnant with both her and Polanski’s first child. Manson criticized his followers on the “messy job” that was done and took them for a drive later that night to look for more victims. Early the next morning Leno and Rosemary LaBianca were stabbed to death. On the wall and refrigerator was written “Death to Pigs” and “Helter Skelter”. It took authorities several months to discover who was behind the attacks. On November 6, 1969, while being held on an unrelated charge, Family member Susan Atkins told a fellow inmate of her participation in the Tate murders. She also admitted to being the one who wrote “PIG” on the Polanski door with Sharon’s blood and a towel.

It was not until July 24, 1970 that Charles Manson, along with Susan Atkins, Leslie Van Houten, and Patricia Krenwinkel stood trial for the murders. The women were three out of the five Family members involved in the crime. Manson insisted on representing himself at trial, Ronald Hughes was assigned as assisting council in the case and to represent the girls. In March, Hughes suggested that Manson bring in attorney Irving Kanarek, who was known for his obstructionism tactics. Manson agreed and two weeks before the trial began he introduced Kanarek as his council. Hughes then moved his primary defense to Leslie Van Houten, who was said to be the least devoted to Manson. The prosecution was led by Vincent Bugliosi; his main goal in the case was getting a first degree murder conviction for Charles Manson. He planned to accomplish this by proving that Manson dominated his Family, with the prosecution’s star witness Linda Kasabian.

This would prove to be an easy accomplishment. Kasabian agreed to testify when the prosecution made a deal for her immunity. In 1969, Kasabian, the married mother of two who had left home “in search of God”, met and fell in love with who a friend had described as “a beautiful man named Charlie” (Linder, 2008). Six weeks after Kasabian had joined the Family, Charlie decided that it was “time for Helter Skelter” (Linder, 2008). She then rode with Tex and the other defendants to the Tate house and witnessed the horrific killings of Steven Parent, Abigail Folger, and Voytek Frykowski. Although Kasabian was present for the murders, she did not enter the house nor did she directly participate in them. She was quoted as saying to Manson, “I’m not like you Charlie, I can’t kill anyone” (Linder, 2008). She later rode with Manson and the others to the LaBianca house where she stayed outside and did not see the murders. Three days after the murders took place Kasabian left the family to rejoin her husband. She later turned herself into police in order to tell her story.

Before she was able to return home to her family, Kasabian took the witness stand. While on the stand for eighteen days, she testified to everything that was done or said from the moment they left the ranch until they returned after the LaBianca murders. Prior to the Manson trial, Hughes had never tried a case and it showed early in the trial. Although using his knowledge of the hippie culture, he was able to raise some questions about Linda Kasabian’s testimony by pointing out that she had used hallucinogenic drugs and believed she was a witch. He also questioned her credibility by stating that she believed in ESP and would get “vibrations” from Charlie. Hughes’ main goal in Van Houten’s defense was to separate her from the rest of the defendants by showing that she was not acting of her own free will but was being controlled by Manson. It was said that Manson was not happy with the defense Hughes was offering Van Houten. In the last weekend of November, Hughes failed to show up for court and was never seen alive again.

His body was not found until four months later and was badly decomposed. At least two of Manson’s Family members claimed that it was a retaliation killing for Manson. On January 25, 1971 a jury found all four defendants guilty of first degree murder in the Tate-LaBianca case. Two months later in March the jury sentenced all four to death. However, the principal actor in these murders, Tex Watson was yet to be tried. After the murders Tex returned to Texas where he was later arrested. He fought the extradition proceedings just long enough to get his own trial. In October 1971 Charles “Tex” Watson was convicted of seven counts of first degree murder. He would have received the death penalty if it was not for the California ruling that the death penalty was unconstitutional which also converted all four of the previous defendant’s sentences to life in prison. The Tate-LaBianca case has been the topic of controversy since it started in 1970.

Some people claim that the trials were biased based on the fact that Manson and his followers chose to live a “hippie” lifestyle which included the use of a number of drugs as well as free sex amongst each other. There was also a statement that president Nixon made claiming that Charles Manson was guilty whether it was directly or indirectly. Nixon claimed that he said this in order to criticize the media for glorifying criminals. Whatever the reasoning was behind this remark the defense in the case attempted to use it to have the case thrown out stating that an unbiased jury was now impossible. The judge denied the request however, and the trial continued. Whether the jury was biased or not the fact remains that these five individuals are responsible for the killings of at least seven innocent people and possibly countless others and should be punished for their crimes. 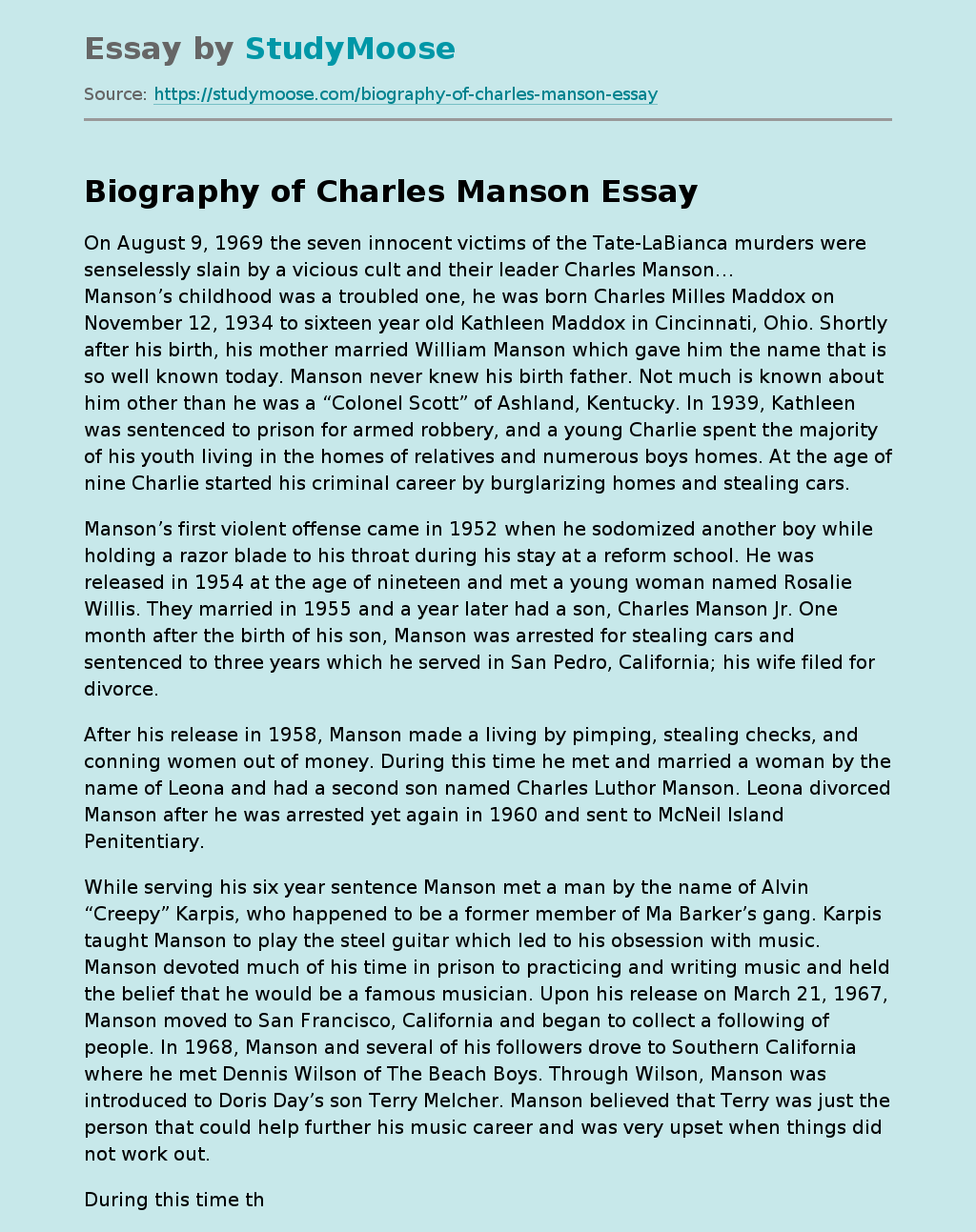