The Mead Hall can be seen as the soul of a Hrothgar’s kingdom in ‘Beowulf’, the reasoning behind it is the offerings of coziness and warmth to the soldiers and the civilians. Because of this, the merit of the mead halls were ineffable. Often, the Mead Hall’s would be embellished in all kinds of expensive metals and treasures, since it is the most vital establishment in the Anglo Saxon Culture. Heorot the amazing mead hall in ‘Beowulf’. Is regarded as the literary aurora and vigor of their kingdom.

Don't use plagiarized sources. Get your custom essay on
“ Beowulf is Ideal Epic Hero ”
Get custom paper
NEW! smart matching with writer

Hrothgar, The King, constructed the Heorot to show how magnanimous and significant of a king he is and all the amenities he is offering to his people. So, when Grendel terrorizes the Mead Hall, it damages the image of the king. Since the Mead Hall is considered the mirror image of the king it makes him look weak. He can’t even keep up his own center, so how was he going to look after his entire kingdom.

The mead hall was comparable to a church. For example, a extremely religious congregation, the center of the community is a church, furthermore, for the Vikings, a mead hall was the focal point of their culture. They sing songs, tell stories, and praise their leaders and those who were victorious in battle. They worship triumphs. The mead hall is their sanctuary of faith in that methodology.

Constantly through out the epic, the reader sees that one trait of an excellent leader was distributing most of the treasure he accumulates among his soldiers.

For the most part, frequent kenning for a good leader or lord was the name “ring-giver,” A king would give his men armbands, never would it be a ring on his finger. When Wiglaf worked up the courage to help Beowulf battle the dragon, he remembers all the treasure Beowulf gave him, so, he adjures his comrades (in vain) to not forget them. When Beowulf was dying, he had Wiglaf haul the dragon coins and the rest of the spoils out of the cavern so he can see what he sacrificed his life for, and he request that it is distributed distributed to his people. It was a true assessment of their fidelity to Beowulf that they burn the treasure on his funeral pyre.

Beowulf is the epitome of the ideal epic hero. Extraordinarily strong, loyal, brave, selfless, and respected. He does ultimately dies battling with the dragon at the end of the poem, but he sacrifices himself to later on protect his kingdom, an extremely selfless act. His men’s response after his passing manifests that they bear him as a eminent king and champion. Beowulf‘s bravery is next level status. He makes the choices, of his free will, to travel to Hrothgar’s domain after hearing proclamations of Grendel‘s violence. He is so selfless and brave he has no trouble putting his life in grave danger to help people in a different kingdom of his own. He is so brave he waits for the monster to come into Heorot and fight him weaponless, for the simple reason that Grendel is also without a weapon. He easily defeats Grendel by tearing off his limb from his shoulder. This shows the great strength in which Beowulf actually has. Lastly, Beowulf is a respected leader his men trust him and swear allegiance to him in the fight against Grendel. Beowulf, in turn, ask Hrothgar to care for his men so that if worst comes to worst and he is killed in battle. All of the examples above show how big of a hero he is with virtually no flaws. 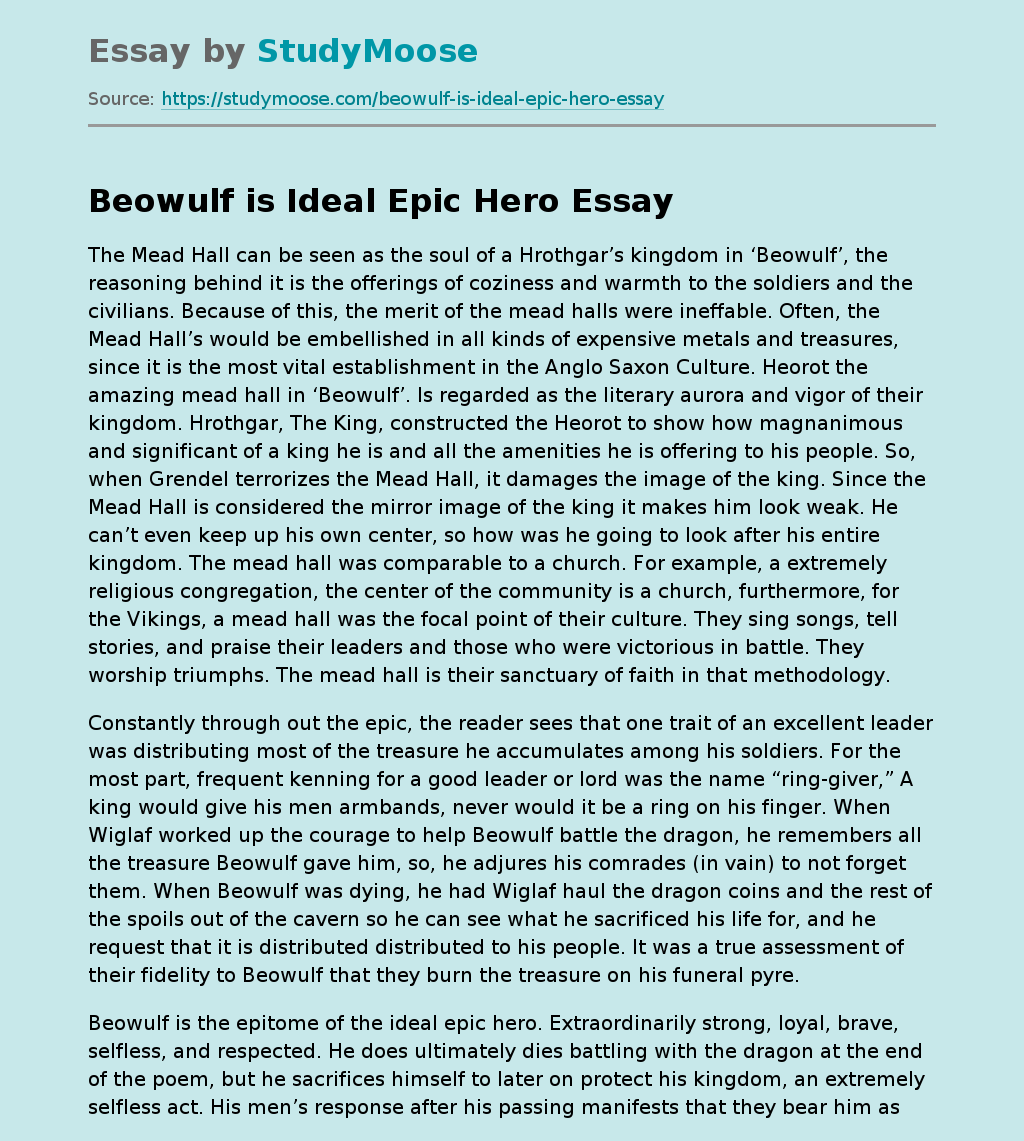