Beowulf as a hero in modern society

In the historic epic Beowulf, its title character, Beowulf, is perceived as an unconventional as well as a traditional hero in current society. Beowulf, the son of Ecgtheow and Hygelac’s thane, is presented as a fearless warrior to the audience. This acknowledgment of Beowulf causes the readers to instantly recognize that Beowulf is a well-respected man. Beowulf’s magnitude is seen at the very beginning of the poem as the narrator states, “The man whose name was known for courage, the Geat Leader” (Heaney 25).

Don't use plagiarized sources. Get your custom essay on
“ Beowulf as a hero in modern society ”
Get custom paper
NEW! smart matching with writer

Beowulf is announced to the Danish people with magnificence. Before proving Beowulf’s heroic qualities, the viewers are conscious of the fact that Beowulf is a great warrior and the son of a well admired man. It can be distinguished that from Beowulf’s opening statements he will become a hero.

Bravery is a key characteristic that identifies a hero. Throughout the entire poem Beowulf appeared to possess infinite valor. He displayed courage in his swimming competition with Breca, and in his fights with Grendel, Grendel’s mother, and the dragon that fatally wounded him.

In all of Beowulf’s struggles, he revels wisdom, strength, and motivation. In his clash against Grendel, Beowulf utilizes his sheer strength to kill Grendel. He used his mighty strength to rip off the monster’s arm from the shoulder. As stated by the narrator, “The monster’s whole body was in pain; a tremendous wound appeared on his shoulder… Beowulf was granted the glory of winning…” (Heaney 55). The defeat of Grendel fulfills Beowulf’s heroic duty.

This is also seen with Grendel’s mother.

After Grendel’s death, Grendel’s mother desires to avenge her child. Beowulf fights her in water and still prevails. By keeping true to his word Beowulf is able to prove his worth. Near the end of poem, Beowulf faces his last episode. He takes on a dragon that is creating havoc upon the city. Before facing the dragon he knows that he might die and yet still fights with glory and all of his might. On page 171 Beowulf states, “This fight is not yours, nor is it up to any man except me… I shall win the gold by my courage, or else mortal combat, doom of battle, will bear your lord away” (Heaney 171). Beowulf yet again completes his task as he kills the dragon, however, he immediately dies from his wounds. Beowulf, a true hero, confronts his death with bravery. It is Beowulf’s strength, determination, and courage that enable him to become a distinguishable hero in modern society.

Although Beowulf is portrayed as a true Anglo-Saxon hero, he has qualities that would depict him not as one in current society. From Beowulf’s initial introduction he is seen as being conceited and aggressive. During the first feast, Beowulf tells of the story of his swimming race. Beowulf states, “I was the strongest swimmer of all…Time and again, foul things attacked me…but I lashed out, gave as good as I got with my sword…My sword had killed nine sea-monsters. Such night-dangers and hard ordeals I have never heard of nor of a man more desolate in surging waves.” (Heaney 37). This quote reveals the cockiness of Beowulf. He is very arrogant as he believes that he is the best and the bravest.

Arrogance is not a characteristic of a hero. Another flaw is shown in Beowulf’s character as he fights Grendel and Grendel’s mother. Beowulf’s quarrel with Grendel exposes his true expression of violence. While Grendel and Beowulf are wrestling, Beowulf manages to get Grendel in such as position where he ripped off Grendel’s arm from the socket. This violent act can be seen as very brutal. The killing of Grendel in such a way would deny the right to name Beowulf as a hero in present society. In addition, the killing of Grendel’s mother has the same effect.

While battling Grendel’s mother, Beowulf seeks assistance from an ancient blade. With this sword, he delivers a final blow to the neck of the monster. After determining that she is death, he still proceeds and decapitates her. He then returns with the head and displays it in Heorot. The decapitation of Grendel’s mother illustrates Beowulf as disrespectful and in violation of the heroic code, which doesn’t identify him as a hero. In the eyes of contemporary society Beowulf can be recognize as a paradoxical character as he is embodied by both heroic and callous qualities.

Beowulf as a hero in modern society. (2016, Jul 21). Retrieved from http://studymoose.com/beowulf-as-a-hero-in-modern-society-essay 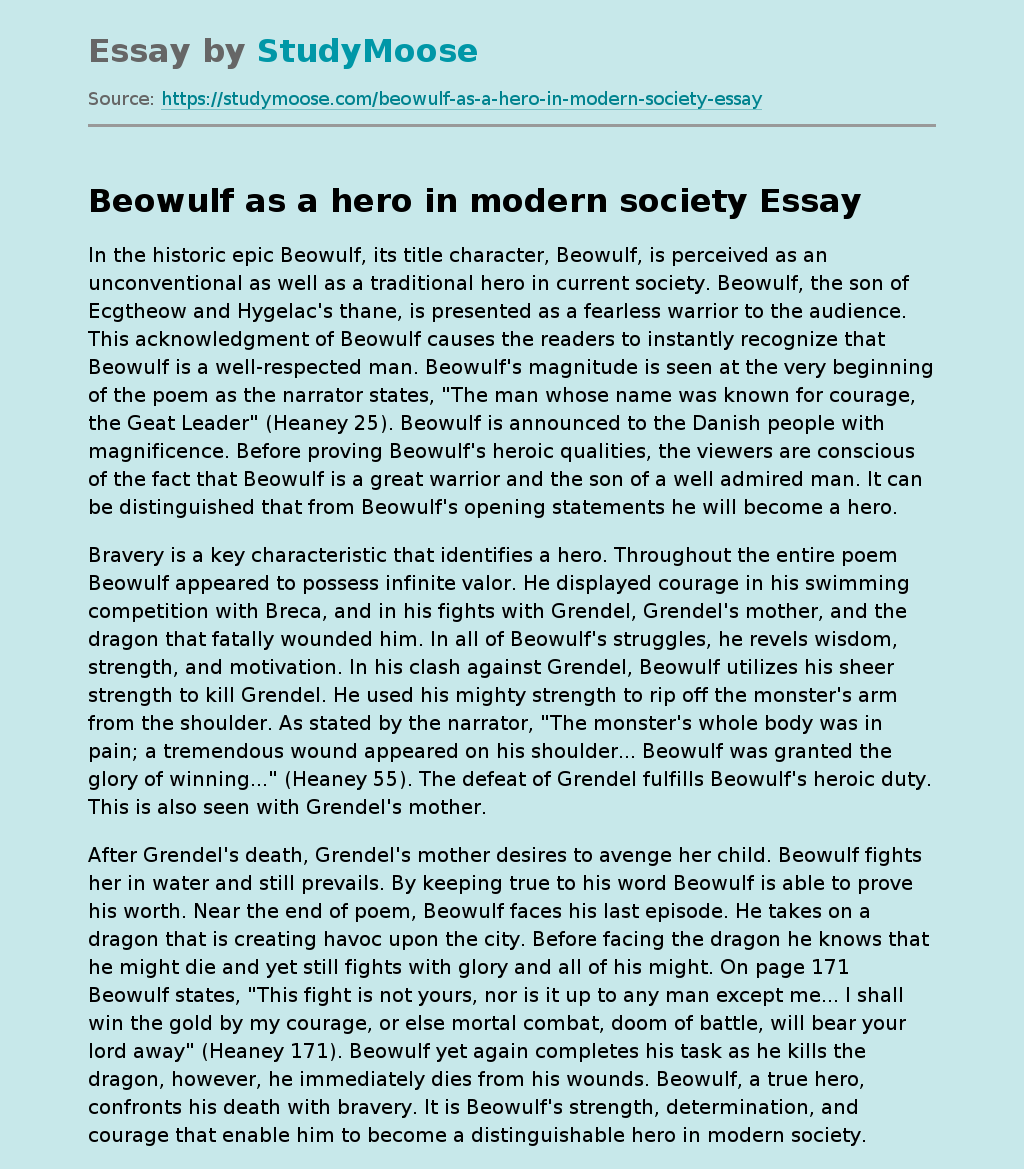