Virtues displayed in the Epic of Gilgamesh

The Epic of Gilgamesh is a tale from ancient Babylon. Its hero, Gilgamesh the king of Uruk, is two-thirds god and one-third man. Throughout the epic, which consists of three stories, the character of Gilgamesh is developed. This is accomplished by changing the vices he possesses at the start of the epic, and replacing them with virtues he receives by its completion. “A virtue is a quality of righteousness, goodness, or moral excellence; any good quality or admirable trait of a character.

Don't use plagiarized sources. Get your custom essay on
“ Virtues displayed in the Epic of Gilgamesh ”
Get custom paper
NEW! smart matching with writer

” (Halsey Collier’s Dictionary 1114) “A vice is an immoral or harmful habit or practice; fault or fall” (Halsey Collier’s Dictionary 1111). Gilgamesh is not the only character in the epic that partakes of vices and/or virtues. Other characters, including Utnapishtim [ the survivor of Great Flood], Ea [the god of water], and Enkidu [the friend of Gilgamesh] exhibit similar character traits. In all four of these characters, their actions are the reason they possess either vices or virtues.

In the opening portion of the epic, Gilgamesh takes a bride from her bridegroom and sleeps with her.

One can see from this act the selfishness of Gilgamesh. As king of Uruk, he finds that he has the right to sleep with whomever and whenever he wants. The vice of arrogance is displayed in this part because of his lack of respect for others. He is portrayed as an arrogant ruler in his attitude toward those people over whom he rules. Another vice displayed in this epic is stubbornness. This is retained by Enkidu, the wild man that becomes Gilgamesh’s friend.

During the battle with Humbaba, the forest demon, Gilgamesh is put in a vulnerable position. He is about to kill Humbaba but then feels charity for Humbaba and slowly backs down. At this point Enkidu urges Gilgamesh to kill Humbaba.

Sensing the indecision of his foe, Humbaba fights back, declaring that Enkidu’s words are false. Enkidu remains stubborn and unrelenting, stating, “Do not listen Gilgamesh: this Humbaba must die. Kill Humbaba first and his servants after.” (Sandars 22)Eventually, Gilgamesh gives into Enkidu’s stubbornness and kills Humbaba. This stubbornness proves fatal to Enkidu, for later in the epic, he suffers death as punishment for his role in killing Humbaba. Gilgamesh is not a completely flawed character; he possesses, and obtains through his adventures, many positive qualities or virtues. For example, he is courageous. This virtue is evident during his battle with Humbaba. This forest giant is a fearsome adversary, aided by the gods, with a considerable size and strength advantage.

Defeat of Humbaba takes the combined efforts of Gilgamesh and Enkidu. To succeed, Gilgamesh had to gain the courage to undergo this task. Enkidu rallies his friend by saying, “O Gilgamesh, remember now your boasts in Uruk. Forward, attacks, son of Uruk, there is nothing to fear.” (Sandars 20) With this, Gilgamesh’s “courage railed” (Sandars 20). He defeats and eventually kills Humbaba for which he is subsequently praised. The virtue of loyalty in the Epic of Gilgamesh is best illustrated by the character Enkidu. He is introduced in the epic as a counter to Gilgamesh. Created by the goddess Aruru, Enkidu, a wild and solitary person, is defeated in a wrestling match by Gilgamesh. He then becomes a loyal and faithful friend to the king. This loyalty is tested before the battle with Humbaba. Enkidu, aware of the giant’s powers and strengths, pleads to Gilgamesh, “You do not know this monster and that is the reason you are not afraid. I who know him, I am terrified… You may go on if you choose… but I will go back to the city…”.(Sandars 20).

Gilgamesh, however, rallies his friend with his reply, “Today, give me your aid and you shall have mine; what then can go amiss with us two?” (Sandars 20). Out of loyalty to his friend, Enkidu remains, and together they defeat Humbaba. Throughout the epic, Enkidu remains loyal to Gilgamesh, a valued companion to the king. The death of Enkidu, the loss of this loyal friend, becomes a turning point for Gilgamesh in the epic. In the last section of the Epic of Gilgamesh, titled “The Return”, the character Utnapishtim is instructing Gilgamesh how to find the plant of immortality. His wisdom and knowledge is the reason Gilgamesh finds the plant. Utnapishtim tells Gilgamesh “There is a plant that grows under the water, it has a prickle like a thorn, like a rose; it will wound your hand, but if you succeed in taking it, then your hands will hold that which restores his lost youth to man.” (Sandars 31). Since he is immortal himself, Utnapishtim knows where to find this plant. He is also wise because he knows that Gilgamesh, even though he is two- thirds god, will not become immortal.

Gilgamesh is not destined to live forever, and will eventually die. The god Ea shows compassion towards Utnapishtim during the story of the flood. Enlil, supreme among all the gods in the epic, was disturbed by the loudness of the people on earth. He was determined to punish them by exterminating them. He addressed the other gods, who agreed with his plan, with one exception. The god Ea remembered Utnapishtim and came to him in a dream, whispering “Reed-house, reed-house! Wall, O wall harken reed-house, wall reflect: O man Shurrupak, son of Ubara-Tutu; tear down your house and build a boat, abandon possessions and look for life, despise worldly goods and save your soul alive. Tear down your house, I say, and build a boat. These are the measurements of the barque as you shall build her: let her beam equal length, let her deck be roofed like the vault that covers the abyss; then take up into the boat the seed of all living creatures.” (Sandars 25) Ea not only demonstrates compassion and charity for Utnapishtim and his family, but plays a crucial and heroic role in the epic.

He remembered the good people and saved them before Enlil could harm them, and defends them before Enlil. Utnapishtim is rewarded with immorality because of the trust and the faith he had in Ea. The virtue of trust is a common theme throughout the epic. In his conquest of Humbaba, Gilgamesh trusts in the god Shamash to support him at his hour of greatest need(“O glorious Shamash, I have followed the road you commanded but now if you send no succor how shall I escape?’[Sandars 20] ). The god rewards Gilgamesh for his trust with divine intervention in the battle. Utnapishtim trusts in the warning from the god Ea, and prepares as commanded for the oncoming flood (Behold, what you have commanded I will honor and perform… [Sandar 25] ). His life, as well as that of his family and the wild creatures, is spared from death by this trust. Later in the epic, Gilgamesh trusts in Utnapishtim, and following his instructions, retrieves the plant that restores youth.

The virtue of trust brings rewards to those who possess it. By the end of the epic, Gilgamesh is a different man. He learns humility as a result of the trials and challenges that he has endured throughout his journeys. For example, when Enkidu died, he was deeply depressed. He realized at that point that nothing truly last forever. Also, he was humbled by the fact that his faithful and loyal companion was no longer there to accompany him on his journeys. Another event that changed Gilgamesh’s personality was loss of the plant of immorality, stolen from him by the serpent in the well. Gilgamesh, heartbroken over the loss [in part due to his own carelessness], understood from that point that he could not live forever, and he was not as majestic as he believed himself to be.

As a result of these events, upon his eventual return to Uruk, Gilgamesh becomes a better king. He was now seen as wise instead of stubborn; knowledgeable instead of stupid; humble instead of greedy. Throughout the story, characters portrayed various virtues and vices. Characters such as Gilgamesh, Enkidu, Utnapishtim, and Ea all have certain qualities about them that make them do good or bad. Some of the virtues that were defined were bravery and loyalty, from the story of The Battle of Humbaba; wisdom, from the story of The Return; compassion, from The Story of the Flood; and humility and trust, from all the stories.

The vices included stubbornness from The Battle of Humbaba and arrogance from the beginning of The Epic of Gilgamesh. Some characters, in particular the main character Gilgamesh, started off with many negative characteristics. However, by the end, their adventures changed their perspectives on life and, in many cases, they acquired more positive characteristics or virtues. Other characters, like Enkidu, paid a heavy price [often death] in punishment for their vices. Finally, there were people who were rewarded for their virtues like Utnapishtim and Ea. Like most epics, The Epic of Gilgamesh creates many different characters who obtain vices and/or virtues to explain a lesson in the story.

Virtues displayed in the Epic of Gilgamesh. (2016, Nov 22). Retrieved from http://studymoose.com/virtues-displayed-in-the-epic-of-gilgamesh-essay 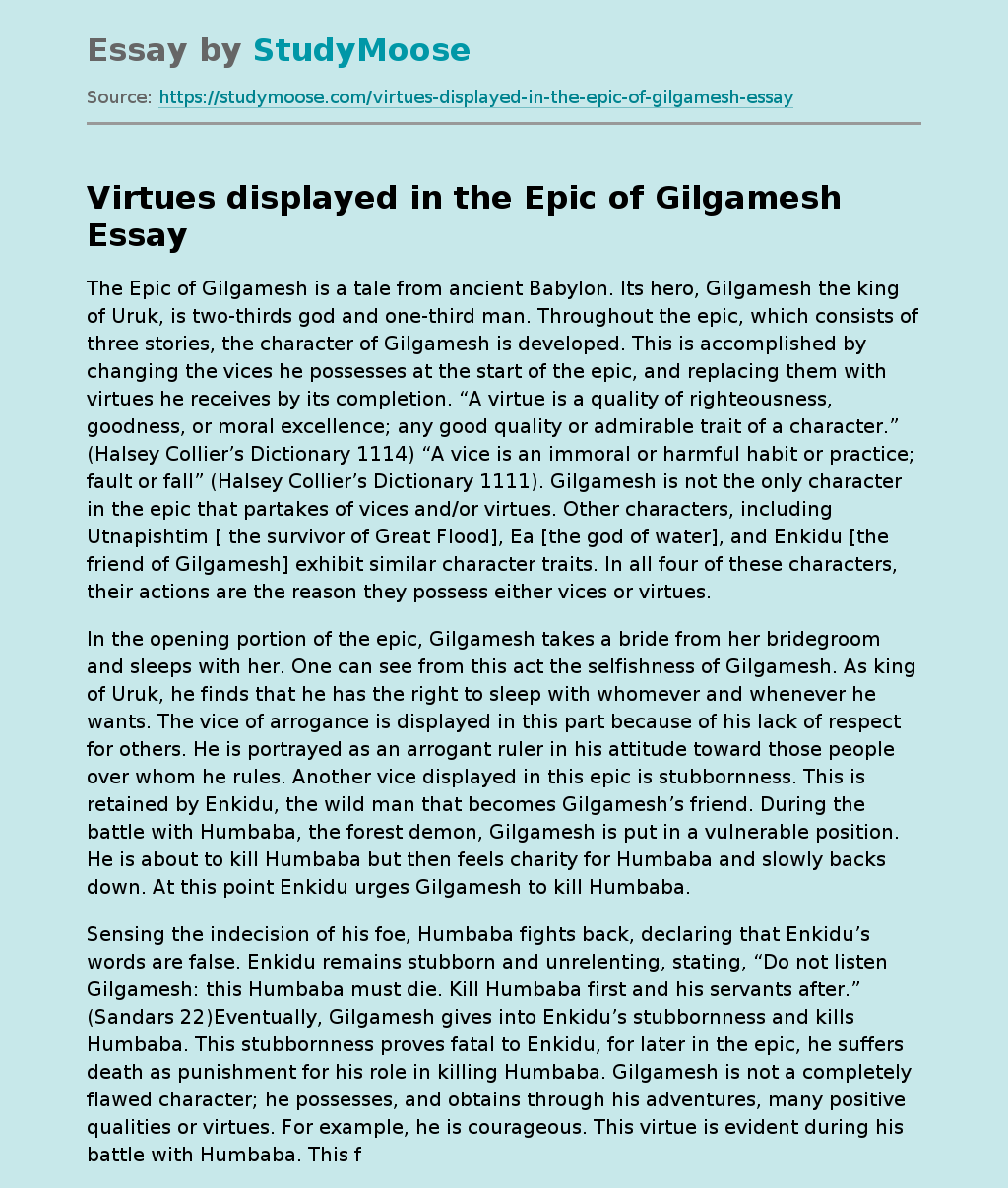