The Epic of Gilgamesh is a historical piece of literature that shaped history and has some impact on modern day literature as well. Perhaps one of the key reasons the Epic of Gilgamesh is so widespread and has continued to be such a great deal in literature for a long time, is because it gives an awareness and understanding of why some humans behave the way they do when emotions and feelings are involved. The lessons taught by this ancient work was relevant back then and is still appropriate today.

Don't use plagiarized sources. Get your custom essay on
“ Transformation of Gilgamesh in “The Epic of Gilgamesh” ”
Get custom paper
NEW! smart matching with writer

Some of the concerns and lessons seen throughout the book that are still relevant today are: the terror and fear that most individuals have in regard to death, having an overwhelming desire to escape death or be immortal, and the effects that a true friendship may have on a person’s life. It does not take a great deal of insight into The Epic of Gilgamesh for a person to locate these themes in the story, and even less introspection to relate to them.

The story itself encompasses life lessons that can be utilized daily. Gilgamesh, himself, who is two-thirds god, and one-third human possesses several unique qualities that are above average due to his god like abilities. It is through a tremendous expedition that Gilgamesh is able to present all these characteristics; however, during the story, we see Gilgamesh transform from a mean, chauvinistic king, to an individual who shows compassion and love for someone other than himself. The transformation that Gilgamesh experienced is what eventually molded him into the loving friend that he became.

Transformed through the loss of a beloved friend, Gilgamesh’s terror rather than his humanity is what truly defines him and signifies him as a hero.

Transformed through the loss of a beloved friend, Gilgamesh’s terror rather than his humanity is what truly defines him and signifies him as a hero. Two different beings brought together to even the unbalance within themselves somehow formed a bond, or a brotherhood that became strong, and very impactful. The loss of a best friend implies the loss of such a tremendous bond, and a true confidant which can cause anyone’s actions to change. This is exactly what happens to Gilgamesh as he witnesses death come over his friend as Enkidu. The goddess Ishtar cursed Enkidu to die of a sickness, and Gilgamesh has the burden to witness this. Enkidu, Gilgamesh’s better half, was the reason that Gilgamesh transformed from the arrogant selfish king into a heroic one who helps protect his city and stand victorious of several battles.

The special bond between Enkidu and Gilgamesh brings about a change within Gilgamesh which allows him to connect with Enkidu in such a positive manner. This bond creates a positive influence within Gilgamesh that is shown throughout the end of the story. The loss of Gilgamesh’s best friend causes him to lose a part of himself. After Enkidu’s death, Gilgamesh questions his own life, “Shall I not die too? Am I not like Enkidu?” (Stephen, Book IX). With this mode of thinking, Gilgamesh sets out to seek immortality in hopes to escape a fate like Enkidu’s; this is the pivotal point in which Gilgamesh transforms into more of a human that that of his god like being. In “The end of the journey: from Gilgamesh to Le citta invisibili.’ Annali d’Italianistica”, Cachey writes …” The didactic poem describes Gilgamesh transcending a stage of heroic adolescence. The death of his companion Enkidu brings home as never before the reality of the hero’s own mortality, which in turns classifies him as a true hero.” (Cachey,71).

In the pursuit for knowledge about obtaining immortality, Gilgamesh sets himself on a dangerous quest which clouds his judgement on the potential outcomes. During this journey, Gilgamesh shows that he is a man of action, rather than one who thinks about his actions before making them. According to Dastur, “It seems therefore possible to argue that humanity does not achieve consciousness of itself except through confrontation with death. This is what is confirmed by one of the most ancient testimonies of human history, the Mesopotamian Epic of Gilgamesh…” (Dastur). Immortality as we all know is unattainable, but this does not stop Gilgamesh from seeking to find it. His virtue is displayed through his journey and its’ purpose.

The journey that Gilgamesh sets out on is a purposeful one; for he is determined to escape the physical and mental limitations of man, despite the fact that he is less man than god. Gilgamesh’s desire and determination to defy death, is what allows him to exceed all expectations, and successfully complete all obstacles presented before him. When Gilgamesh reaches Utanapishtim, he has so many questions in regard to mortality. When Gilgamesh insists that he be permitted to live eternal life, Utnapishtim states “If you think you can stay alive for eternity, surely you can stay awake for a week.” (Stephens, Book XI). When Gilgamesh fails the test, he thinks that it is over. Just as Gilgamesh is prepared to return to Uruk, Utanapishtim’s wife tells him that there is a plant that has the ability to return someone back to their youthful years. In pursuit of his goal, Gilgamesh is determined to find the plant. Despite all the obstacles Gilgamesh overcame, unfortunately, his chance at immortality was taken from him by a snake. Even though he failed to attain immortality, Gilgamesh by far was not a failure. Ultimately, Gilgamesh returns back home to Uruk where he presents himself as a totally different king. He now is a king of virtuous status, and of moral being. These are qualities that he did not possess in the beginning of his reign. With this, Gilgamesh is truly a hero amongst his people of Uruk.

Gilgamesh’s mysticism, however, also shows a different side of the goals that Gilgamesh had set for himself. A man two-thirds god and one-third man sets himself apart from all others. In her book, Gilgamesh the Hero, Geraldine McCaughrean, describe the condition of Gilgamesh in saying: Gilgamesh wants to escape human limitations, to get answers to questions not available to his contemporaries, and perhaps most importantly, he wants to overcome mortality both for himself and others. But ultimately his story shows us that, despite his extraordinary talents, in these matters he is not different from other humans. Thus, we see that it is precisely his human limitations that make him truly heroic. (82-83).

With Gilgamesh’s divine lineage, he is able to complete some enormous and astonishing obstacles. His obsession with attaining immortality, and seeking the knowledge on how to achieve it, set him apart from his old self. Looking at the effort and drive that Gilgamesh puts towards attaining immortality, this lets us know that he is not only doing this for himself, but potentially for those he loved. Mortality is inescapable, no matter the genetic makeup of an individual however, this did not stop Gilgamesh’s pursuit to reach his goal. No matter how amazing a person may be, that doesn’t matter when evaluating human life, for all humans must die, as in the unfortunate fate of Enkidu. For any individual that is only human, that person will have limitations on the things that they can and cannot do; thus, it is not Gilgamesh’s divinity but his humanity that truly defines him and signifies him as a hero in the eyes of the people of Uruk.

The lesson that one should take from Gilgamesh is to never give up on accomplishing a goal, even if the pathway to reach them seems impossible. This message that Stephen Mitchell demonstrated throughout the epic in combination with the presentation of morality, well-being, and virtue all display lessons that were shown through an epic poem that has endured centuries. From conquering battles with fierce beasts, to watching his best friend die, to embarking on a journey to attain immortality, The Epic of Gilgamesh is amusing while also displaying segments of a harsh reality. Losing the rejuvenation plant to a snake appeared to be a defeat, until Gilgamesh witnesses the change that has transformed within himself while on his journey. To go from being hated by his people to becoming a hero in their eyes, Gilgamesh’s character change was prevalent; however, without the unfortunate death of his friend, none of this would have happened. In the article “Death”, Lessick wrote the theme of death and heroism is seen regularly. In Gilgamesh, the ancient epic of Mesopotamia, heroism is clearly illustrated through relationships, responding to the deaths of loved ones, and war. (Vol. 3). With his failure to achieve immortality, and his transformation Gilgamesh is truly now a hero, because he has discovered how to be humane despite being more god. In “Looking at the other Gilgamesh”, Dickson wrote The One Who Saw has now become the One Who is Seen and, even more tellingly, the one seen not as the acme of heroism or the standard of masculine heauty. (171-182). Gilgamesh’s heroism and transformation are such a joy to witness and he sets out on his journey. 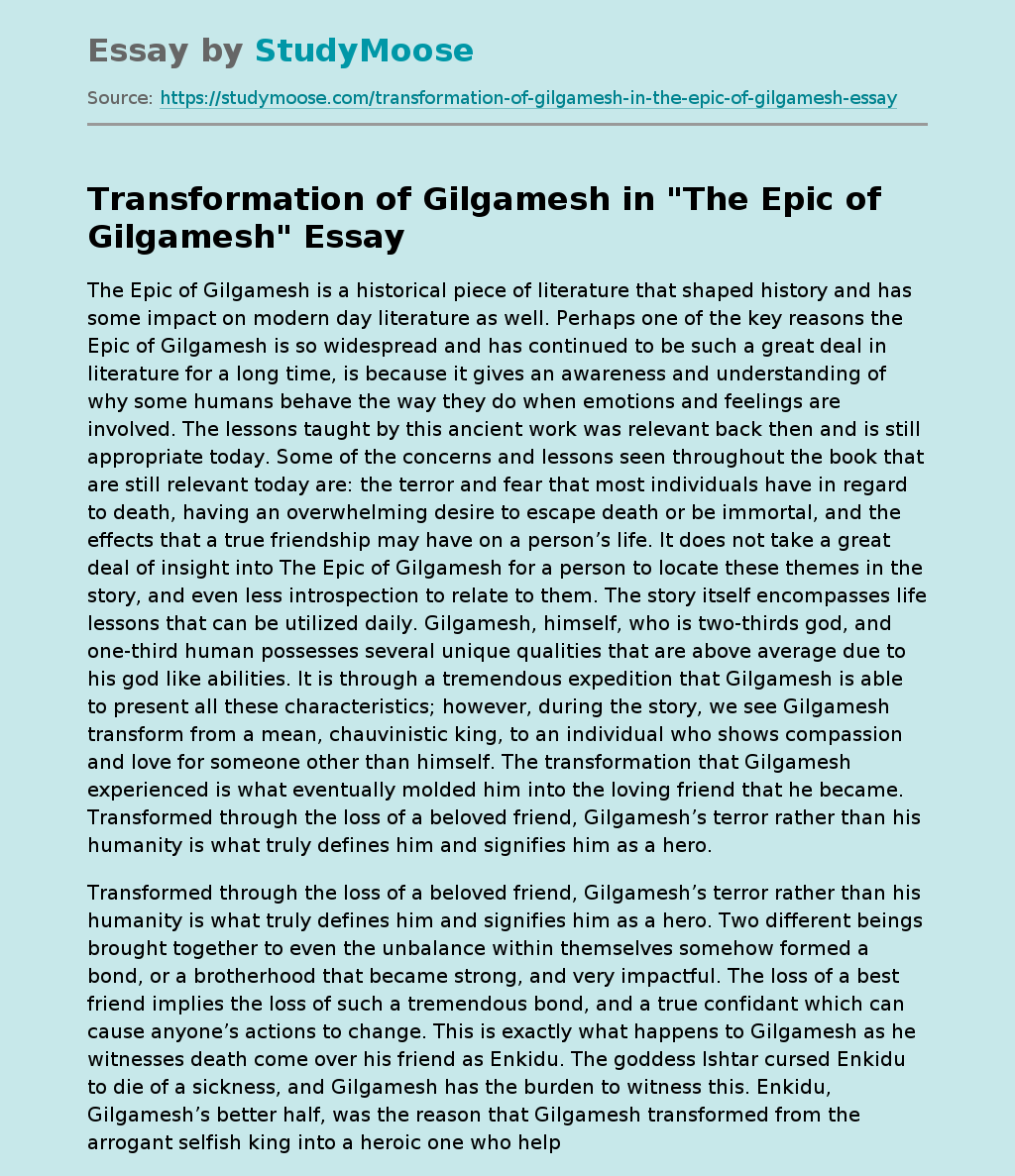