The Involvement of the Gods in Gilgamesh, Metamorphoses, Iliad, and Odyssey

Gilgamesh, Metamorphoses, Iliad, and Odyssey are four ancient mythology literatures that were valued as almost sacred texts by the civilizations that owned them. Gilgamesh is a Mesopotamian ancient text about the local Babylonian king Gilgamesh who reigned in 2700 B.C. The story (or legend) was written initially in the Sumerian language on stone tablets; nevertheless, this story has been reproduced beyond Mesopotamia and hence had versions of the following languages also: Akkadian, Hurrian, and Hittite.

In Gilgamesh could be found not only the king’s life; the ancient Sumerian belief on life after death and the intervention of the gods in mortal life are also in the story.

Don't use plagiarized sources. Get your custom essay on
“ The Involvement of the Gods in Gilgamesh, Metamorphoses, Iliad, and Odyssey ”
Get custom paper
NEW! smart matching with writer

As such, Gilgamesh is not only an epic; it is also a mythology story. The same could be said about the Greek Iliad and Odyssey. Both literatures were believed to have been told by the blind poet, Homer, who lived during the Greek dark ages.

These two books recount the story within and after the Trojan war: the Iliad narrates the Trojan war and how Troy was defeated by the Achaeans; while the Odyssey begins after the Trojan war when Odysseus sets sail to go home, but due to the hatred of Poseidon, Odysseus was stalled a lot of times, being stranded from one island to another, until finally, he reached his hometown Ithaca, regaining his wife and child.

Metamorphosis is the most recent among these four literatures and probably the least veiled in mystery. It is a compilation of stories about human interaction with the Roman gods.

It should be remembered that the Roman gods are the Greek gods given Roman names. As such, there would be a relation by default between the Iliad, Odyssey, and the Metamorphoses precisely because in these books, we talk about the same gods. Gilgamesh, being Sumerian, would be the odd man out, so to speak. Nevertheless, among these four works, we could mention similarities between human interaction and the gods and of course differences. Let us begin to look at the similarities in the interaction of the gods and humans in these four works.

In all four works, the gods are seen to be actively involved in the lives of men, or at least, in special men and women. Gilgamesh himself is 2/3 god, and 1/3 human. Even his best friend, Enkidu, was created by the sky god Anu to be the subhuman rival of Gilgamesh. When Gilgamesh decided to go to the Cedar Forest and kill the demon, Humbaba, the sky god Shamash promised Gilgamesh’s mother that he will protect him. These series of human interaction with the gods goes on until the end of the story. The same could be said about the Iliad. Agamemnon and Achilles, for example, were approached by the goddess Minerva to stop their brawl against each other: “I come from heaven, if you will hear me, to bid you stay your anger. Juno has sent me, who cares for both of you alike. Cease, then, this brawling, and do not draw your sword…” (Iliad, Book 1).

This same interaction with humans could be observed throughout the Odyssey as well. In book 1, we see Minerva disguising herself as Anchialus to give counsel to Ulysses’ son, Telemachus. She did so to give him the courage to wait for his father since his father is still alive. Metamorphosis exhibits the same direct involvement of the gods in the lives of humans. In Book 1, we see Io, the daughter of the river Inachus. Io has a human form and was taken advantage of by Jove. Io suffered a lot because of this act of Jove as she was transformed into a heifer only to be given to Juno, Jove’s wife, as a gift.

The story goes on as Io continuously suffered until Jove admitted to his wrong doings and Io was transformed into her human form again. In all four literatures, the gods are directly involved with humans, not only to aid them or to answer their prayers or to protect them, but even to take advantage of them, or to be their parents. Achilles has a nymph for a mother. Gilgamesh is 2/3 god. Io has a river for a father. Jove, the high god, is Io’s rapist. The relation of the gods to the humans simulates almost the social interaction that humans have with each other, except that, because of the gods’ supernatural capacities, this interaction with the gods becomes richer (in a sense, becomes more “supernatural”).

The interaction is richer in the sense that the interaction produces results that may not necessarily happen when humans merely interact with each other. Probably, no human interaction could ever produce an Achilles or a Gilgamesh, for example. And no rape victim would ever turn into a heifer. Poseidon’s hatred of Odysseus brought him everywhere leading to an adventure that no mere mortal of lesser status than Ulysses could ever have or handle.

In spite of these similarities among the four literatures on the interaction between the gods and men, there are at least two differences between Gilgamesh and the three other literatures. As mentioned above, the Iliad, the Odyssey, and Metamorphoses all share the same set of gods. As such, in one way or another, the same “culture” of gods could be observed in all three works.

In the Gilgamesh, in spite of the gods being vicious in the same way that Greek and Roman gods are vicious, these heavenly beings may dispense counsel that speaks of wisdom that seems to be rarely encountered in Greek and Roman mythology. Many times, wisdom seems to be dispensed by prophets and prophetess in Greek mythology. This is not the case in the Mesopotamian literature. On his way to find immortality, Gilgamesh encountered Siduri, the woman of the vine and the maker of wine. Siduri told Gilgamesh of the essence of humanity:

You will never find that life for which you are looking. When the gods created man they allotted to him death, but life they retained in their own keeping. As for you, Gilgamesh, fill your belly with good things; day and night, night and day, dance and be merry, feast and rejoice. Let your clothes be fresh, bathe yourself in water, cherish the little child that holds your hand, and make your wife happy in your embrace; for this too is the lot of man. (Gilgamesh in Brown).

Siduri, in this exhortation, speaks of immortality as the very essence of humanity. Humanity consists not in desiring immortality but in rejoicing and enjoying this world, in making one’s family happy. Such words could rarely come out from the vicious gods of the Greeks and the Romans.

The second difference is in the presence of the fates in Greek and Roman mythology and its absence in Gilgamesh. For the Greeks (and Romans), something higher than the gods is at work, and these are the fates. The fates are timeless goddesses that are responsible for the book of life, such that the gods themselves could not bend what is fated; they could only defer it. This was Poseidon’s case in spite of his hatred for Odysseus. It has already been fated that Odysseus would be able to go home to Ithaca.

This was also the case of Achilles who was fated to have his heel as his weakness. This element of fate could not be seen in the Gilgamesh. True, the gods may decide on what they want to do to humans, but still, humans may, through cunning or the help of some god, escape this decision of the gods. This was the case of Utnapishtim and his wife who were able to survive the great flood because Ea (one of the goddesses of humanity) informed Utnapishtim’s wall about the decision of the gods to banish humanity.

As such, the four literatures show a very direct relationship between the gods and men. Nevertheless, Gilagamesh and the three other literatures differ as to the wisdom-dispensing function of the gods and the absence of the fates.

Brown, Arthur. Storytelling, the Meaning of Life, and the Epic of Gilgamesh. 1996. University of Evansville’s Exploring the Ancient World. March 10, 2007 http://eawc.evansville.edu/essays/brown.htm.

The Involvement of the Gods in Gilgamesh, Metamorphoses, Iliad, and Odyssey. (2017, Apr 01). Retrieved from https://studymoose.com/the-involvement-of-the-gods-in-gilgamesh-metamorphoses-iliad-and-odyssey-essay 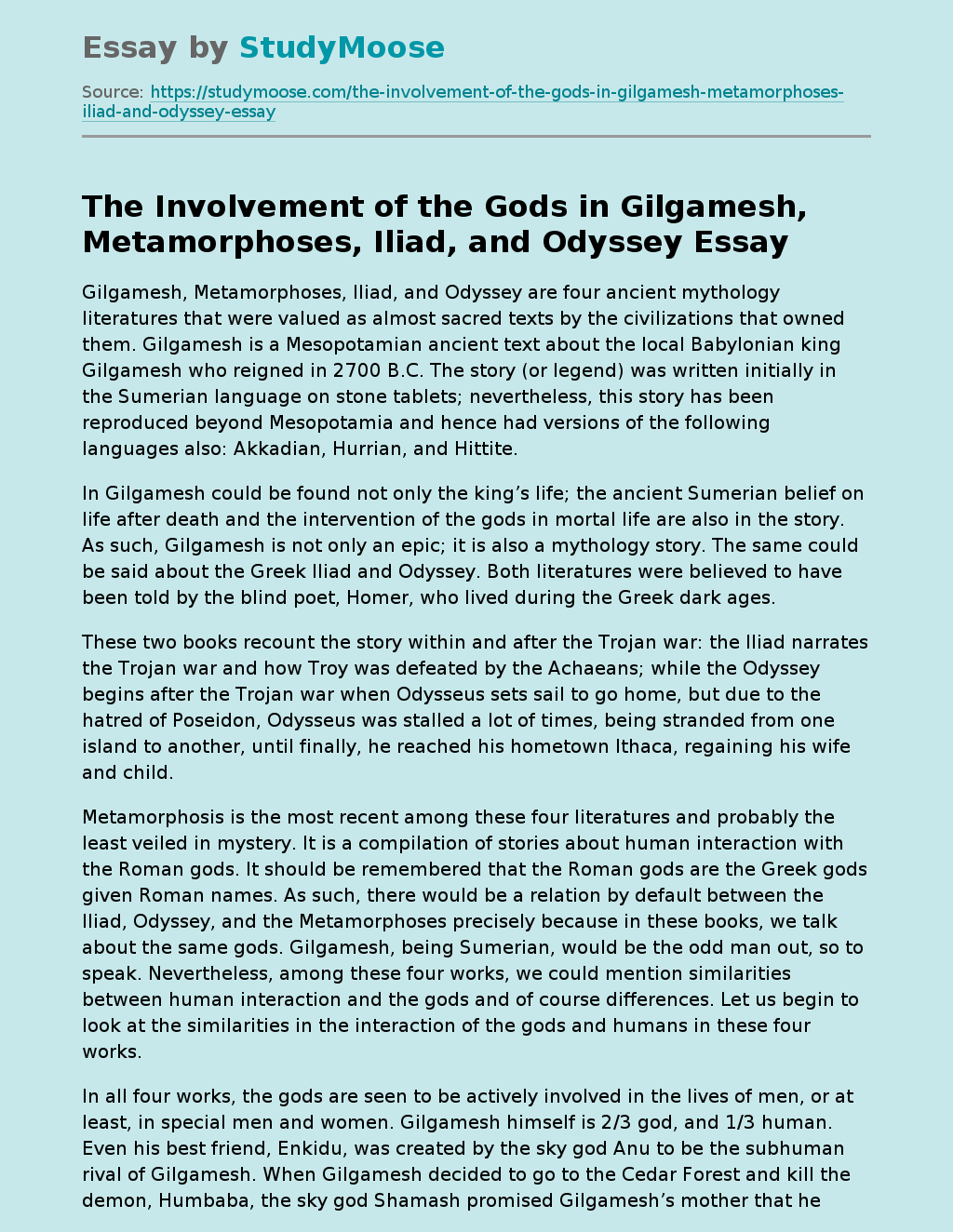